RECIPES: Two Fourth of July-themed pastries to set off your taste buds’ fireworks 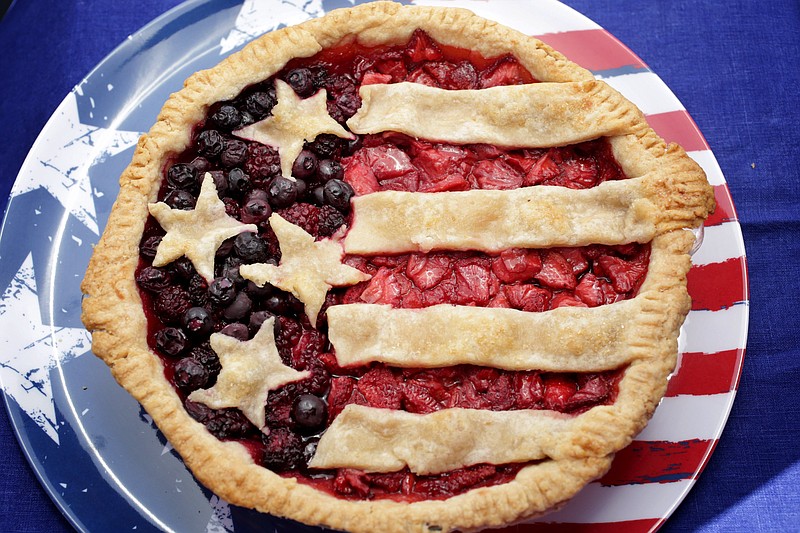 Celebrating the Fourth of July? That's as American as apple pie.

So why not celebrate it with an apple pie? It is the quintessential American dessert — it goes along, as the commercial used to say, with baseball, hot dogs and Chevrolet.

Except, as with a lot of American foods, it did not originate in America. In England, in fact, they say something is "as British as apple pie," and they have a better claim to the boast. The first known recipe for apple pie was English and dates to 1381.

"Tak gode Applys and gode Spycis and Figys and reyfons and Perys and wan they are wel ybrayed colourd wyth Safron wel and do yt in a cofyn and do ye forth to bake wel," it said.

If I may put the class I took on Chaucer to good use for the first time ever, I'll attempt a translation: Take good apples and good spices and figs and raisins and pears, and when they are well chopped and colored with saffron, put it in a double pie crust and bake well.

So apple pies are British. Fine. Wasn't that why we fought the American Revolution? To escape the tyranny of King George III, for representation in government and for the right to claim apple pie as our own? 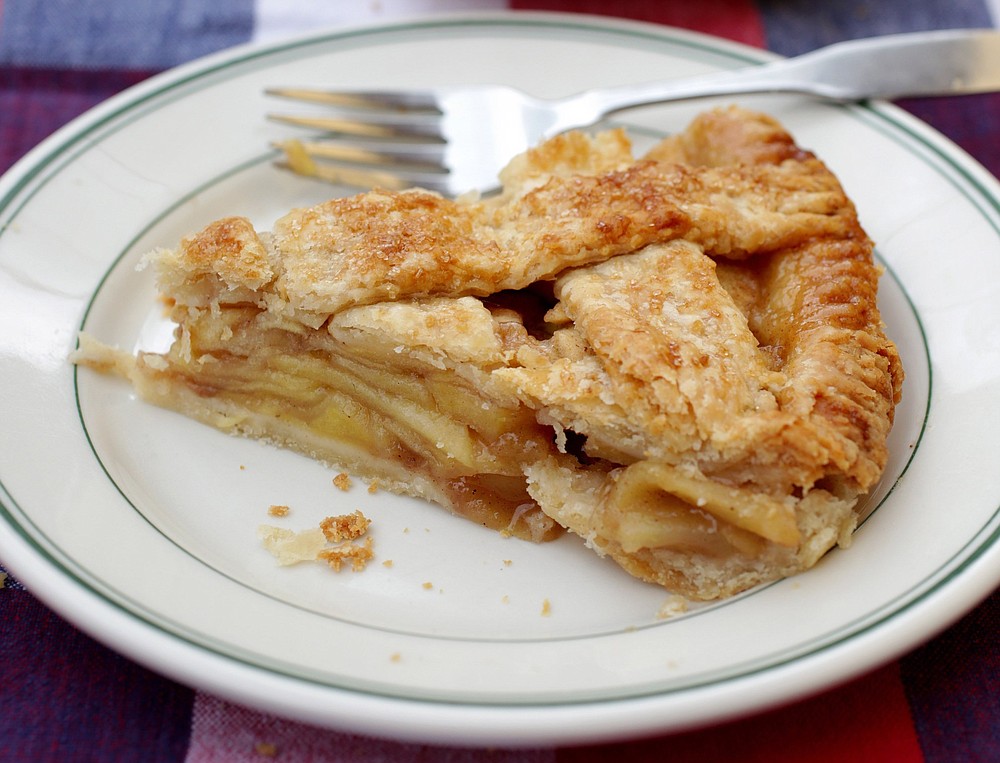 A slice of apple pie for a 4th of July celebration (TNS/St. Louis Post-Dispatch/Hillary Levin)

So if you're feeling patriotic this Independence Day, celebrate with an apple pie. And if apple pie is not to your taste, you can always be a little showier about your patriotism with a stunning American Flag Pie.

An American Flag Pie is a delicious representation of the American flag, with a field of blueberries or blackberries, red stripes of strawberries and white stripes and stars made of crust.

With any pie, the crust is the thing. For my Fourth of July pies — apple and flag — I wanted to make the best crust I possibly could.

I have always used butter; given the choice between flavor and texture, I will pick flavor every time. But then I ran across an idea put forth by Julia Child and Ina Garten and, I'm sure, grandmothers everywhere: using a mixture of vegetable shortening and butter.

It was a revelation. I can't imagine why I'd never thought of it before.

I used Garten's recipe, which calls for a little more than twice as much butter as shortening. It was the best crust I'd ever made. It may be the best crust I've ever eaten — buttery and flaky and oh so good.

And now, if I may, I'd like to make a confession. Although I love pie more than perhaps any other food in the world, except doughnuts, there is only one kind of pie I do not like: apple.

And yet, I thought it was my patriotic duty this year to make apple pie. And I'm glad I did because, like the crust I baked it in, it was the best apple pie I'd ever had.

I used a recipe for the filling from the King Arthur Baking people precisely because it used two ingredients that I had not even thought of for apple pie, but they turned out to make all the difference — vanilla extract and apple juice concentrate.

With the addition of the vanilla and the apple juice concentrate, you know you are eating an apple pie. Even those of us who ordinarily do not like apple pie will help themselves to another slice. I certainly did.

The American Flag Pie is a berry pie, which I love, but the way it looks is easily as important as the way it tastes. There are several versions of the pie roaming wildly throughout the internet, so I chose the one that looked the best.

The recipe comes from Sally's Baking Addiction, a food blog that has at least spawned a few cookbooks. It calls for the simplest possible strawberry and blueberry fillings; the only hard part is cutting the stars out of the crust. And even that isn't hard if you have a small star-shaped cookie cutter.

I do not have a small star-shaped cookie cutter. But I just cut a small star out of cardboard and used that as a template to make my stars.

It turned out great. It looked patriotic. And if you feel a little hesitant to eat a pie in the representative form of a flag, just remember it is a British thing and dig in.

Dice the butter if you haven't already and return it to the refrigerator or freezer while you prepare the flour mixture. Place the flour, salt and sugar in the bowl of a food processor fitted with a steel blade and pulse a few times to mix. Add the butter and shortening. Pulse 8 to 12 times, until the butter is the size of peas.

With the machine running, pour the ice water down the feed tube and pulse the machine until the dough begins to form a ball. Dump out on a floured board and roll into a ball. Wrap in plastic wrap and refrigerate for 30 minutes.

Cut the dough, making one piece slightly larger than the other. Wrap in plastic and refrigerate until ready to roll. Roll the larger piece on a well-floured board into a circle, rolling from the center to the edge, turning and flouring the dough to make sure it doesn't stick to the board. Fold the dough in half, place in a pie pan, and unfold to fit the pan. Repeat with the top crust, or cut it with a pizza cutter or sharp knife to make strips for a lattice.

Recipe adapted from a recipe by Ina Garten, via the Food Network 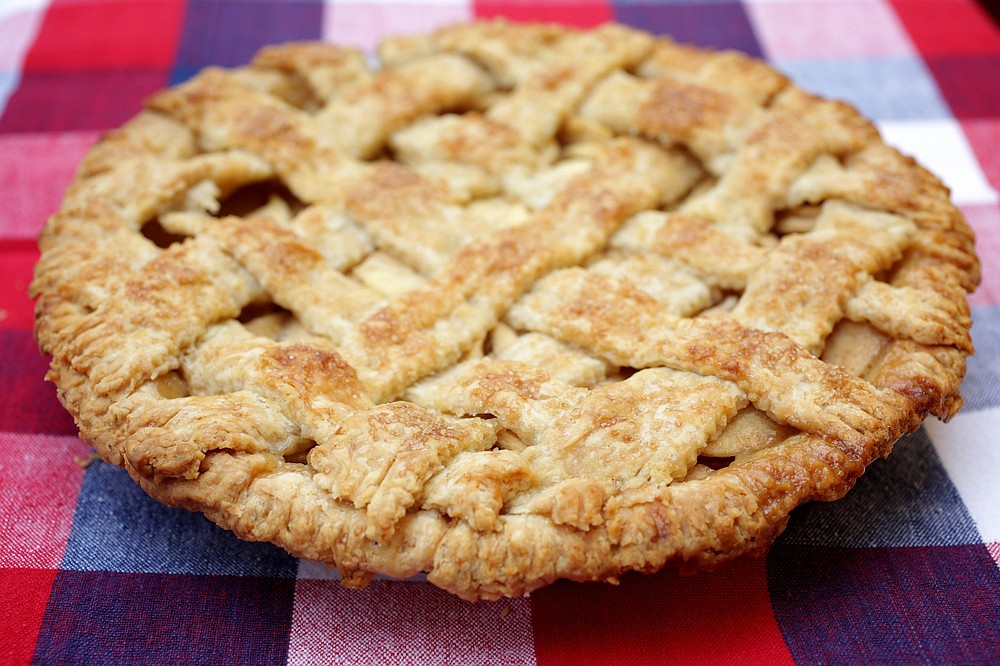 Combine the sliced apples and lemon juice in a large mixing bowl.

In a small bowl, whisk together the sugar, flour, cornstarch, salt and spices. Sprinkle the mixture over the apples and stir to coat. Stir in the apple juice concentrate and vanilla.

Roll the larger piece of dough (if using doughs of different sizes) into a 13-inch circle. Transfer it to the prepared pan and trim the edges so they overlap the rim of the pan by 1 inch all the way around.

Spoon the apple filing into the pan. Dot the top with diced butter.

Roll out the remaining dough to an 11-inch circle. Either cut into thin strips for a lattice or place the whole circle on top of the pie. Bring the overhanging bottom crust up and over the top crust, pinching to seal the two and making a decorative crimp. If using the entire top crust, pierce it all over with a fork to allow steam to escape, or cut decorative vent holes.

For extra crunch and shine, brush the top crust with milk and sprinkle with coarse sugar. Place the pie in the refrigerator for 10 minutes to firm up the crust.

Place the pie on a parchment-lined baking sheet. Bake the pie for 20 minutes, then reduce the oven temperature to 375 degrees and bake 40 minutes more. You should see the filling bubbling inside the pie (and perhaps onto the parchment). Check the pie after 30 minutes of baking time and cover the edges with foil or a pie shield to keep them from browning too quickly, if necessary.

When the pie is done, remove it from the oven. Cool it completely before slicing; the filling continues to thicken as the pie cools and if you cut it too soon it will run out all over the place. Store lightly covered at room temperature for several days, or freeze.

In a small bowl, stir the granulated sugar and cornstarch together. Place the blueberries (or blueberries and blackberries) in a medium bowl. Place the strawberries in a large bowl. Stir ¼ cup of cornstarch mixture into the blueberries. Stir remaining cornstarch mixture into the strawberries. Add 1 teaspoon of lemon juice and ¼ teaspoon of almond extract to each fruit mixture. Place in the refrigerator while the oven heats and you roll out the crust.

On a floured work surface, roll out one of the discs of chilled dough (the larger one, if using doughs of different sizes). Keep the other one in the refrigerator. Turn the dough about a quarter turn after every few rolls until you have a circle 12 inches in diameter. Carefully place the dough into a 9-by-2-inch pie dish, making sure it is smooth. Fold a piece of aluminum foil several times to form a 2-inch wide strip. Place into crust, dividing the crust into 1/3 and 2/3 sections.

Remove the other disc of chilled pie dough from the refrigerator. Roll the dough into a circle that is 12 inches in diameter. Using a sharp knife or pizza cutter, cut 4 strips that are 2 inches wide and 6 inches long. Using a very small star-shaped cookie cutter or a small star-shaped template you make yourself, cut several stars out of remaining dough. Reroll any dough scraps if needed.

Remove the pie from the refrigerator, remove the aluminum foil strip separating the strawberry area from the blueberry area. Arrange cut crust pieces over filling, placing stars over the blueberries and stripes over the strawberries to form an American flag design. Use a small knife to trim off excess dough on the sides. Crimp the edges with a fork or flute the edges.

If desired, beat together the egg and milk, and lightly brush the pie crust with this mixture. Sprinkle with coarse sugar, if desired.

Place the pie onto a large baking sheet and bake for 20 minutes. Lower the temperature to 350 degrees and bake for an additional 30 to 35 minutes. Check the pie periodically; if the edges are browning too quickly, cover them with aluminum foil or a crust shield.

Allow the pie to cool fully at room temperature before serving. Cover leftovers tightly and store in the refrigerator for up to 5 days.