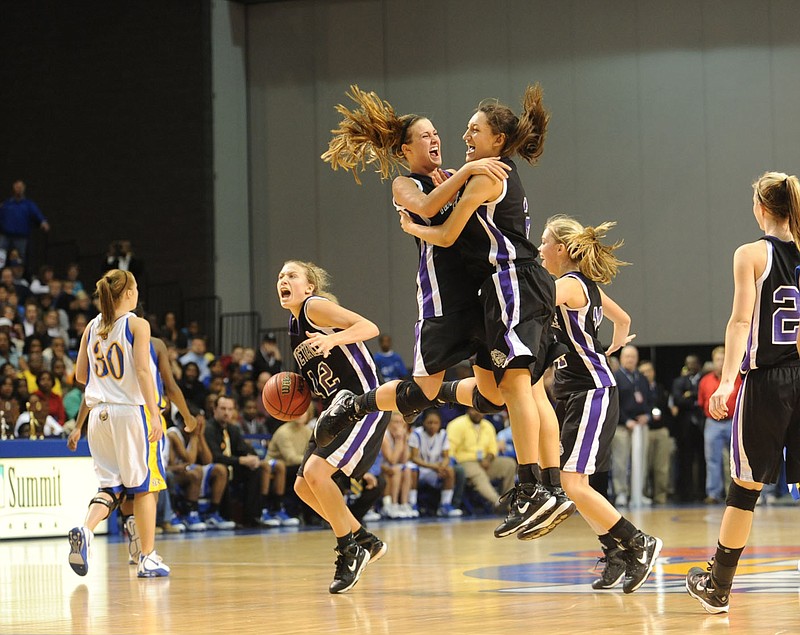 FAYETTEVILLE -- Barry Gebhart never felt any sort of competition between Fayetteville's boys and girls basketball teams during the 2008-09 season.

But when the Lady Purple Bulldogs defeated North Little Rock 72-61 in the state finals on March 14, 2009, to complete their 32-0 season, the feeling was real for the former Fayetteville boys' basketball coach. It was now his team's turn to try to match what the school's female counterparts accomplished.

"All of a sudden I was like 'Oh no,'" Gebhart said. "I remember it hit me like a ton of bricks. Now we've gotta go perform."

Even Cassie (Clarke) Loyd could see it in her friends' faces when they swapped "Congratulations' and 'Good luck' greetings as the girls walked off the floor.

"They were happy for us, but you could also see in their eyes 'oh crap,'" Loyd said.

But perform they did.

The Purple'Dogs did their part, holding off a late charge by Rogers for the 40-34 win to finish off their own undefeated campaign at 30-0.

Gebhart said both teams shared similar characteristics of not only great talent but also character and leadership.

"I don't think either of us had to worry about them playing hard or practicing hard," Gebhart said.

Guards Fred Gulley and Kiko Haydar provided those intangibles for the boys, he said. Kourtni Williams, who was recently hired as an assistant women's basketball coach at Boston University, was called the "glue" of the girls' team by Loyd.

Lady Purple'Dogs coach Bobby Smith echoed Gebhart about his team's competitive nature. Both teams steamrolled a lot of their competition that season.

"That group was all about winning," said Smith, who is now an assistant principal at Fayetteville High School. "A lot of kids and a lot of teams say that, just look at the volume of assisted baskets and the distribution of scoring. It was really fun to see how the kids shared the ball."

That was evident in the championship game. Lloyd led the team with 17, but all five starters scored in double digits.

Smith worried at one point the group might lose its edge with a lot of lopsided wins. But that competitive side was fierce even in practice, he said.

"I would split them even and go two to four quarters hard with a consequence at the end," Smith said. "I had to be really careful with that because they would kill each other trying to win to stay out of those extra line drills.

"Some of the best games I saw all year were on Wednesday at 3 o'clock after a blowout win."

Loyd moved from a small town in Oklahoma to Fayetteville prior to her senior year and admitted being worried about how she would fit in with an already established group. But the bonds that were formed that year continue today, she said.

"These were my best friends," Loyd said. "Three of them were in my wedding. I'll never forget sprinting to Kourtni Williams and hugging her after it was over. It was just pure joy."

Loyd, who is now the head volleyball coach at Springdale Har-Ber, now has a better perspective and even more respect for the way Smith handled that season. In addition to being a move-in, she was also the only regular that also played volleyball.

"Now that I'm running my own program, I can't imagine the stress he was under," Loyd said. "I think he handled it beautifully. He showed me no favoritism, but he encouraged me."

Going undefeated is something that's seldom talked about, but Haydar actually voiced it as a goal prior to that 2008-09 season, Gebhart said.

But he quickly dispelled the notion at the time.

"I told them 'we're not mature enough to go undefeated,'" Gebhart said. "But the following year there was a different attitude among the group."

Haydar, who would go on to a solid college basketball career at the University of Arkansas, remembered Rogers cut a 10-point Fayetteville lead down to one in the fourth quarter.

"We all kinda just looked at each other, and I think Cable Hogue said 'OK, let's go get this done.'" Haydar said.

Former Mounties coach Marty Barnes, whose Rogers teams were known for defense, said that Fayetteville team's guard-play and defense made them different.

"Everybody knew Gulley was special," Barnes said. "Kiko surprised everybody his whole career. He goes to Arkansas as a walk-on and becomes a main cog. He had a lot of intangibles.

"They were a lockdown man-to-man team. What I appreciated was they played man-to-man the right way. They manned you up."

The boys' team never trailed in the fourth quarter all season. But that wasn't the case for the girls.

The Lady Purple'Dogs showed some mettle, rallying from a 17-point second-half deficit to defeat nationally ranked Houston Bellaire in the finals of a tournament in Duncanville, Texas, over the Christmas holiday.

"They had eight or nine D-1 kids, and we were playing our fifth game in three days," Smith said. "Those kids had the ability to reach down and get that little bit extra."

Smith remembered telling a friend at some point late in the season that not finishing undefeated with that group was going to feel like a letdown. But the players persevered.

"I did the math and told them anything less than 32-0 is gonna feel like a rotten season," Smith said. "They really loved to play and it was one of our saving graces I believe.

"There was a ton of distractions that last 4-6 weeks especially with the boys having the remarkable season they were having. When it came time to throw the ball up, it was almost a relief. And they just performed every single time." 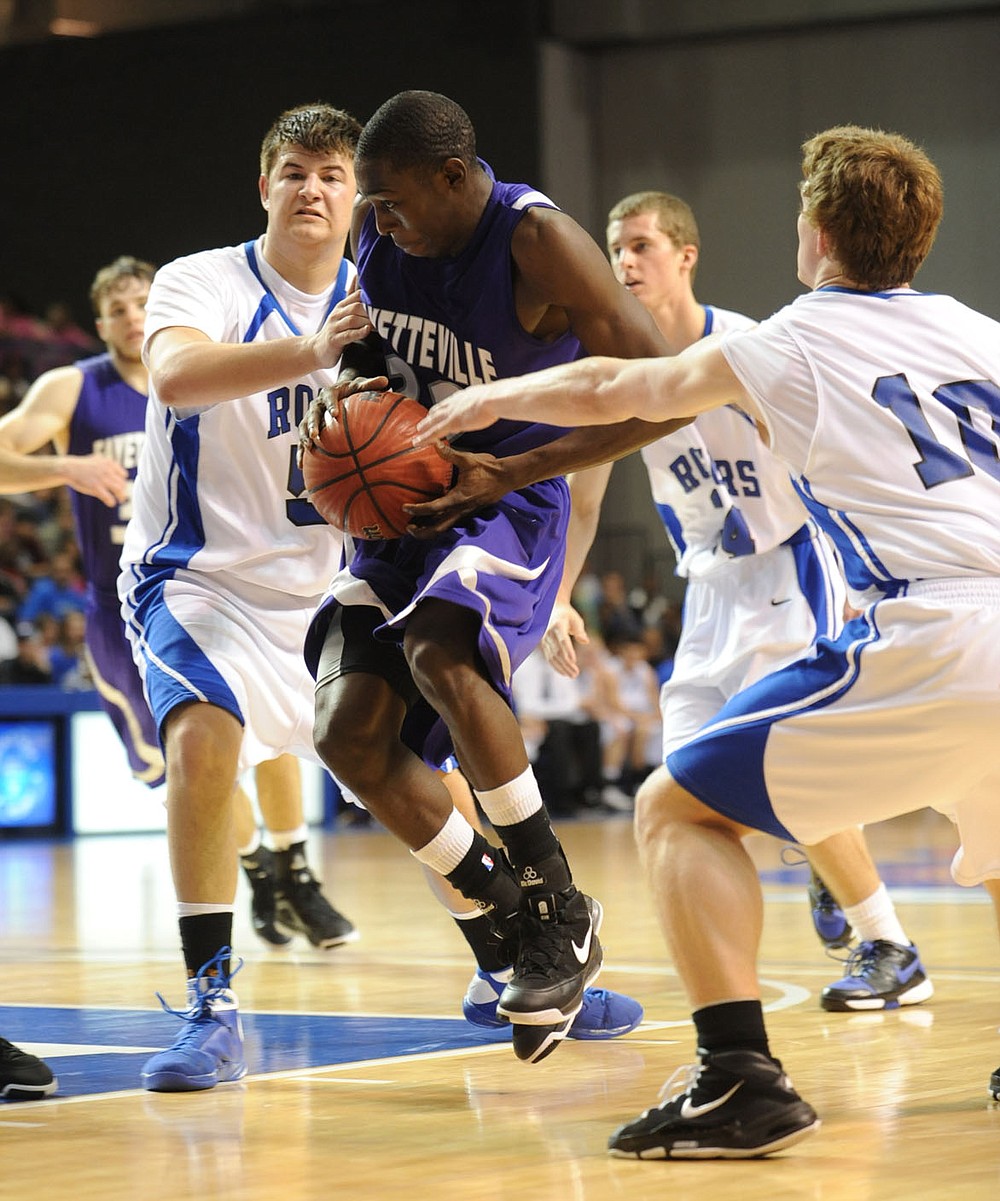 ANDY SHUPE NWADG Fayetteville's Fred Gulley (22) steaks past Rogers' Tanner Kaza, left, and Hunter Smeltzer during the second half of the state championship game on March 15, 2009 in Summit Arena in Hot Springs. Fayetteville won 40-34 to join the girls' team in each winning state titles and finishing with undefeated seasons.