Railroad line could become relevant again a century after being abandoned 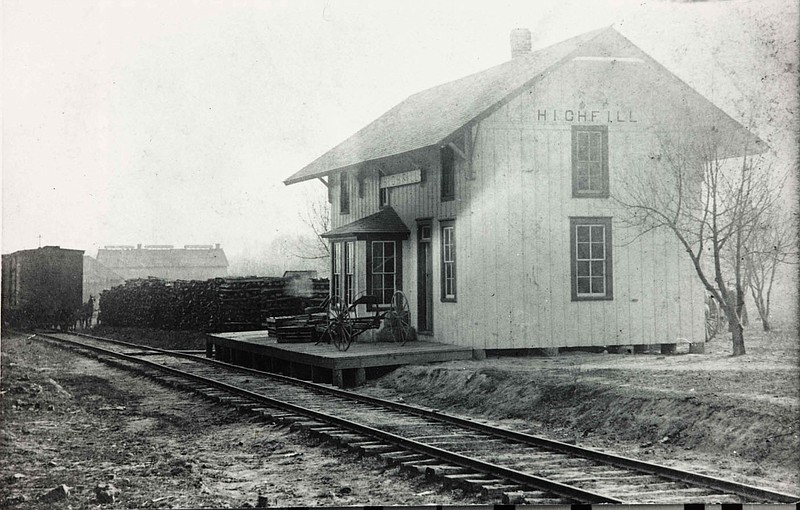 Apples and railroads were a big deal in Northwest Arkansas in the early 1900s, with rail lines crisscrossing Benton County to transport apples from the sprawling orchards to market, including a line that once ran from Siloam Springs to Rogers via Highfill.

The rails were ripped up more than a century ago, in 1918, but the old rail bed is still there, at least in places. The 10-mile line is still shown on the Arkansas State Rail Plan, even though the easements have long since lapsed. That means it could be used again to run a spur to the vicinity of the Northwest Arkansas National Airport from the Kansas City Southern tracks in western Benton County.

"We worked to ensure that corridor was in the state rail plan, long-term, just in case," said Mike Harvey, chief operating officer of the Northwest Arkansas Council. The council is a nonprofit group comprising local business and government leaders.

"Basically, the corridor, from what I understand, runs along an old rail line that served apple growing communities back when. There were apparently rail spurs all over Benton County a hundred years ago."

Harvey said keeping that rail option could come in handy should an industrial or manufacturing company want to locate west of Northwest National.

"I think we'd have to have a lot of stars line up," Harvey said. "A seriously big industrial prospect that would make the commitment to site a facility there, then the infrastructure could follow, we could apply for grants and so forth to run the infrastructure out there with commitment from the company. I'm not going to say never, but those are rare opportunities."

Harvey said the area should be attractive in the future as the region continues to fill in along the I-49 corridor. He noted manufacturing and distribution companies generally pay good wages without requiring a college degree.

Harvey said members of the council like to think about the next generation in terms of future employment opportunities, and the site near Northwest National likely will be attractive to industry once the infrastructure is developed.

The Arkansas Department of Transportation is working on a planned access road to Northwest National and possibly beyond. They're also looking at the possibility of a road connecting the Bella Vista Bypass with the U.S. 412 Springdale Northern Bypass. A western beltway has also been discussed but would be several years further out.

Development of the area would be a long-term project, Harvey said.

"The thinking is that maybe five or 10 years from now that could have the potential to be a developed industrial park or commerce park and be ready for tenants. The rail story is just a little bitty piece of that."

The Highfill Council, earlier this month, narrowly passed an ordinance to change the zoning of just over 1,000 acres of land belonging to Mathias Ranch LLC from light industrial to general industrial.

The land had been rezoned from rural-residential to light industrial in September 2016. The zoning change makes it possible for heavier industrial uses.

Tom Hopper, speaking for the Mathias properties, said the sites west of the airport would be good for industrial use.

Mayor Michelle Rieff said she had met with a prospective buyer for the land, and the sale has the support of the Northwest Arkansas Council and the Walton Family Foundation.

Andrew Branch, chief development officer of Northwest National, said airport officials are always looking to attract nearby businesses. There are more than 1,500 acres available west of the airport, but Northwest National isn't likely to get into the railroad building business, Branch said.

"We wouldn't be directly involved, but we would be enthusiastically encouraging it," he said.

The Federal Aviation Administration generally disallows the airport from spending money off airport land, he said.

Branch noted money the airport has spent on the proposed access road has come from an old federal earmark, not airport revenue.

"I don't think there are any viable plans to build anything. There are always ideas for manufacturing, but nothing's in the works that I think is going to get done," Branch said. "It's like, if we ever get a project over here, they may need rail. Where would we put it? That's kind of where that is."

Branch said locating industrial or manufacturing businesses near the airport could also help with their FAA compliance.

"One of our responsibilities with the FAA is to try to ensure compatible land use around the airport, and the FAA generally doesn't want houses, residential, to be built really close to an airport because it's just dangerous, and it's loud."

Since the airport doesn't own the land around the airport, all they can do is ask Highfill, Centerton and Bentonville nicely to keep residential development at bay, he said.

Branch said the state's rail plan identifies the corridor in case someone down the road wants to install rail.

"I guess at some point when they pulled up the railroad tracks, they probably returned the easements to the property owner. So, there aren't any active easements," Branch said. "Somebody would have to go through there and buy all that land back up. You'd have to purchase it or eminent domain it."

Aaron Burkes, CEO of Northwest National, said he has seen estimates, from a 2006 Air Cargo Study and Freight Transportation Access Assessment, that it would probably cost $10 million-$12 million to bring rail over to the airport on the old rail bed.

The number of miles in the U.S. railroad network has steadily declined since its peak in 1916. Some relatively significant segments of the Arkansas rail network have either been threatened with closing or abandoned in recent years.

When rail lines are abandoned, that usually terminates the railroad's easement interest and the land generally reverts to the owners of the adjacent land from which the easement was granted.

Part of Fayetteville's Frisco Trail follows an abandoned railroad bed originally built by the Pacific & Greater Eastern Railroad at the end of the 19th century. It was used later by the Ozark & Cherokee Central during the early part of the 20th century before it was taken over by the St. Louis & San Francisco Railway, better known as the Frisco.

The corridor was abandoned in the early 1980s but remained undeveloped until the city bought the right of way in the early 2000s.

Highfill has evolved, transportation-wise, over the years from rails and steam engines to runways and jet airplanes. The community was founded as a railroad town, shipping apples from the orchards early settlers had planted around the town, according to historians.

Jason Woodward and Silas Gorden acquired land shortly before the Civil War in the area that would become Highfill. The town was named for Hezekiah Highfill, a Civil War veteran who bought land near Woodward's and Gorden's in 1885, according to the Encyclopedia of Arkansas. All three families established apple orchards on their land.

Benton County boasted an estimated 40,000 acres of apple orchards by 1900, based on tree counts, with only slightly smaller acreage in Washington County, making them the two largest apple-producing counties in the United States.

A community called Hoover once existed just south of Highfill's orchard, but construction of the Rogers Southwestern Railroad, linking Rogers to Siloam Springs, bypassed Hoover. The people moved to the town platted on Highfill's land adjacent to the railroad, according to the Encyclopedia of Arkansas.

The community of Highfill was platted on March 30, 1906. A post office and a railroad depot were built with loading yards for shipping apples.

Among the numerous reasons for the decline were poor varieties, a growing reputation for shipping poor-quality fruit and the consequences of an expanding monoculture resulting in increases in insect and disease pressure, according to the Encyclopedia of Arkansas.

Highfill declined quickly after the railroad owners, the Kansas City and Memphis Railway Co., went bankrupt in 1914. The rails had been removed by 1918.

In the early 1990s, as plans were developing for a regional airport, the town government annexed 7,000 acres to the east. 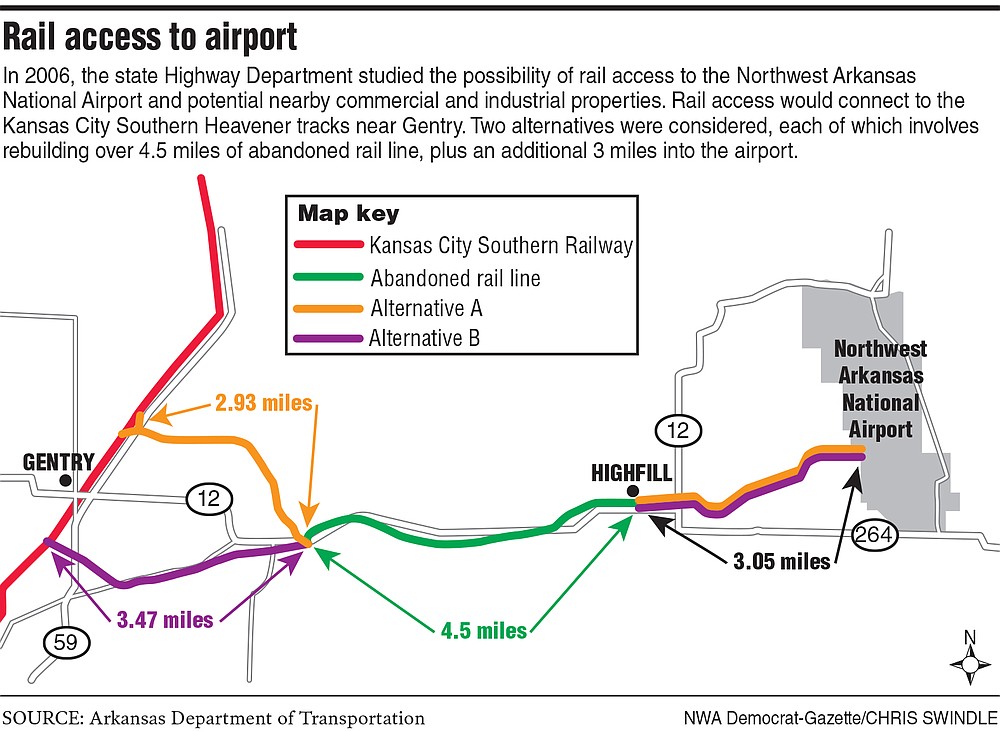 The state’s rail plan includes several measures that could be used to keep rail corridors from being abandoned in the future including:

• Establishing a scenario whereby the state can acquire rail corridors that would otherwise be abandoned.

• Providing grants or loans to support short line infrastructure investment to prevent their operations from declining to the extent continued operations are at risk.

• Establishing a rail-banking program, a legal means of maintaining an intact rail corridor. Rather than being abandoned, a corridor is assigned an “interim use” status as a recreational trail.

• Using state law to discourage full abandonment of rail corridors, if consistent with the state constitution.

Print Headline: What's past is prologue for an old Benton County rail line