As I sip coffee on a warm Tuesday morning in Bentonville, I think that I'm looking at the bright future of Arkansas. I'm listening to brothers Tom and Steuart Walton. The sons of Jim Walton (and grandsons of Sam Walton) have made it their mission to change Arkansas for the better.

As a native Arkansan--and a pretty provincial one at that--I'm delighted that they've taken on the betterment of this state as their primary project. These are after all men with the resources to do whatever they want, wherever they want. The fact that they're concentrating on Arkansas bodes well for the future.

Their focus isn't just on Bentonville, and they're not working alone. They're part of a younger generation of business leaders --people such as former Arkansas House speaker and banker Davy Carter of Jonesboro come to mind--with fresh ideas on how the state can reach its potential in the knowledge-based economy of the 21st century.

These men and women come from a far different place than the old breed of economic developers who focused their efforts on attracting manufacturing facilities. The new leaders realize that economic development in this century is about finding talented people, and the way to get the attention of those people is to offer quality-of-life amenities.

The Walton brothers' Runway Group is an example of that modern approach. It's all about quality of life.

The language on the Runway website gives a clue to the brothers' thinking: "Whether you're on a bicycle, in the air, at a restaurant, strolling downtown or enjoying a piece of art, those moments can be transformative -- giving you a reason to think beyond the ordinary and imagine the extraordinary. Thinking big is at the core of what we do and drives us to make the region even better than we found it.

"Steuart and Tom Walton began their work to advance northwest Arkansas more than a decade ago. Since then, they've built a team of visionaries and investment professionals who are leading this region on a path to building a better community we can all enjoy now and for generations to come."

The organization's mission statement is to "sustainably develop and transform the northwest Arkansas region into a dynamic lifestyle metropolitan area with a unique culture that reflects our heritage and natural beauty. By doing so, we all move forward."

When it comes to company values, Runway says it believes in "creating a healthy, outdoor-focused lifestyle for all those who live here; in building world-class downtown environments with unique cultural scenes; in offering mobility opportunities beyond automobiles; in becoming known for a welcoming and diverse culture; and in supporting bold civic and community leaders who fight complacency and advocate for a better future."

So what does this mean from a practical standpoint? Consider the various Runway divisions.

The brothers' development and real estate company is Blue Crane, which is creating some of the best residential and commercial developments in this part of the country.

Runway's hospitality arm is Ropeswing Hospitality Group, which operates restaurants, bars and meeting facilities in Bentonville such as the Preacher's Son, Undercroft, Pressroom, Record and Louise. All have a big-city feel.

Ropeswing also established a city club (a country club without the golf course) in downtown Bentonville known as Blake St. It gives members a place to dine, entertain friends and clients, exercise, swim or spend quiet time in the library.

In the area of outdoor recreation, the brothers have invested in projects such as the Monument Trails (in state parks across Arkansas), Coler Mountain Bike Preserve, Kessler Mountain, Oz Trails and Osage Park.

"Our creative efforts often focus on reinventing spaces as a means of energizing the old to reflect the new," the Runway website notes. "From murals to sculpture and even neon signs, our passion for the creative is the reason we're involved in all the work you can see here. And there's more to come.

"We've created a community hub for recreational aviation called the Fieldhouse at Thaden Field in Bentonville. By connecting outdoor experiences through aviation, we strive to make the industry even more relevant to the next generation than it is today."

Each year, the American Business Awards are given to recognize achievement in every facet of the workplace. Earlier this year, Runway won one of the awards, known as the Gold Stevie.

"We're working to take northwest Arkansas to new heights by focusing on investments, businesses and brands to drive this catalytic change in the region and in all of Arkansas," Chad Yoes, the Runway CEO, said at the time the award was presented. "Positive change comes by taking action and making an effort, and that is what we aspire to do every day."

The Walton brothers use two examples when talking about their dreams for Arkansas.

One is Texas. They talk about how Austin--which combined its music and food scenes with a high-tech culture, making it one of the world's hottest cities for highly educated young people--was the "tip of the spear" for changing the image of Texas.

"There was a sense that something big was going on in Austin and that all of these smart people wanted to be there," one of the brothers told me.

They believe Bentonville has the chance to be a similar tip of the spear for changing people's impressions of Arkansas. And they think they can do it without the traffic problems and high cost of living that now plague Austin.

The other example they use is Colorado. Steuart received his bachelor's degree from the University of Colorado at Boulder before attending law school at Georgetown University in Washington, D.C.

The brothers think Arkansas has a chance to be viewed as the "Colorado of middle America"--a place with abundant outdoor recreational and job opportunities, minus the high cost of living on the West Coast or East Coast.

It's estimated that Colorado's scenery and affordability attract about 30,000 California residents each year. These Californians view Colorado as a state with a better climate, plenty of artistic and cultural resources, a health and wellness focus, and recreational opportunities.

The Walton brothers hope that the right investments in the arts, outdoor recreation, and health and wellness will allow Arkansas to attract people from increasingly crowded Texas cities in addition to cities in the middle of the country such as Chicago and St. Louis.

On the same day I had coffee with the brothers, Walmart Inc. announced good news. Revenue in the first quarter was $138.3 billion, up 2.7 percent from a year earlier and beating a consensus estimate of $132 billion.

"This was a strong quarter," said Walmart CEO Doug McMillon. "Every segment performed well, and we're encouraged by traffic and grocery market share trends. Our optimism is higher than it was at the beginning of the year. In the United States, customers clearly want to get out and shop. We have a strong position as our store environment improves and e-commerce continues to grow. ... We anticipate continued pent-up demand throughout 2021."

What's good for Walmart generally is good for northwest Arkansas. It's also no secret that Walmart is recruiting millennials with the skills needed to compete in the digital world. The things Steuart and Tom Walton are doing make those recruiting efforts easier.

In talking with the Walton brothers, however, it's evident that their efforts go far beyond making it easier for Walmart to recruit talent. They want northwest Arkansas to be among the nation's hot spots for entrepreneurs, especially those in the high-tech sector.

Earlier this month, for example, the Kansas City-based nonprofit Right to Start announced that it's working with the Northwest Arkansas Council to help aspiring entrepreneurs access key relationships. Right to Start is based on the idea that everyone has the right to start business ventures.

Another announcement earlier this month provided a sense of where northwest Arkansas is headed. That announcement was that CEI Engineering Associates Inc. of Bentonville has formed a department focused solely on outdoor recreation development.

"To meet the multifaceted needs of existing and future clients, CEI has moved forward with establishing a team dedicated to the record growth and development of our region and other areas of the country desiring to provide their citizens with state-of-the-art recreational facilities," said Jeff Geurian, the CEI president.

The manager of the new department is Jacob Shy, who has led the development of more than 100 miles of trails in the area.

It's a long way from the days when an engineering firm in Arkansas was far more likely to talk about the work it was doing on industrial parks.

The Walton brothers make no secret of the fact that they would like Bentonville to be the preferred residence for competitive cyclists in the years leading up to the 2028 Olympics in Los Angeles. Holding the Olympic cycling trials in Arkansas prior to the Los Angeles games isn't out of the question.

In the letter he sends to companies and individuals being recruited to Bentonville, Graham Cobb, who heads the Greater Bentonville Area Chamber of Commerce, expounds on the cycling culture.

"In our current hyper-mobile economic era, the talent needed to drive the world's most successful companies can live and work anywhere," Cobb writes. "We believe that cycling is a key differentiating attribute of Bentonville and is in the process of making it a preferred destination for these future economic drivers. So strong is our taste for adventure that it has given rise to a culture in itself.

"In this corner of the Natural State, the outdoors are both a finished product and a blank canvas. Our brushes vary--bikes, kayaks, hiking boots, motorcycles, paddleboards, boats, pontoons or sport planes--but we all seek adventure, and we enjoy opportunity for expression. Our parks are purpose built and make a great place to walk, listen and learn."

This is a different strategy from the old mode of industrial development that was practiced across Arkansas for decades.

Cobb grew up in Little Rock and worked for the chamber of commerce there before moving to Bentonville. Like the Walton brothers, he believes Bentonville can be that "tip of the spear" that leads to change elsewhere in Arkansas.

"I love this state," Cobb told me as we drove around Benton County. "I think Arkansas has a zeitgeist about it that allows for dream chasing and doing really big things. Investments in quality of life retain the brightest stars, attract top talent and give the rest of us a life that's rewarding and inspiring."

When I visited with Tom Walton, I noticed that he was carrying a copy of a book titled "Be 2.0." It's an updated version of a book Jim Collins and Bill Lazier wrote titled "Beyond Entrepreneurship." That first book influenced many of the pioneers who created the technology revolution and gave birth to the Silicon Valley.

Cobb summed up the vibe that one clearly feels when walking around Bentonville and visiting with those who live and do business here. This is a place where almost 65 percent of the population moved from somewhere else. Those people came to Bentonville for a reason.

"There's nobody up here who is out to be second," Cobb said. 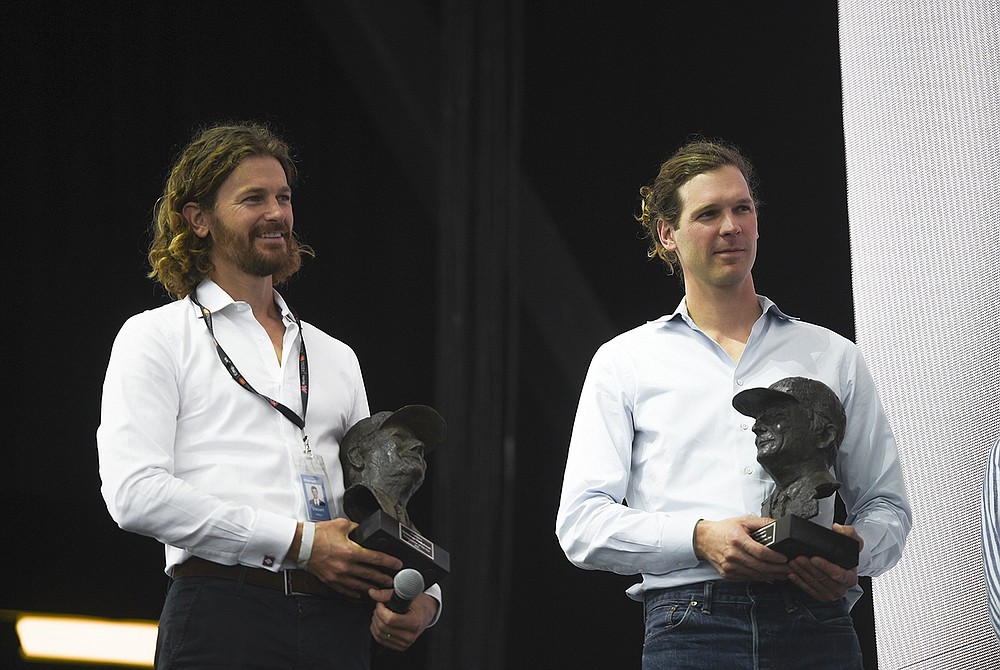 Steuart Walton (from left) and Tom Walton, shown here presenting the Sam M. Walton Entrepreneur of the Year Award on June 4 during the annual Walmart Associate Celebration at the Arkansas Music Pavilion, are instrumental in revitalizing northwest Arkansas as the popularity of Crystal Bridges Museum of American Art, founded by their aunt Alice Walton, continues to grow, as do the region’s outdoor recreational amenities. (NWA Democrat-Gazette/Charlie Kaijo) 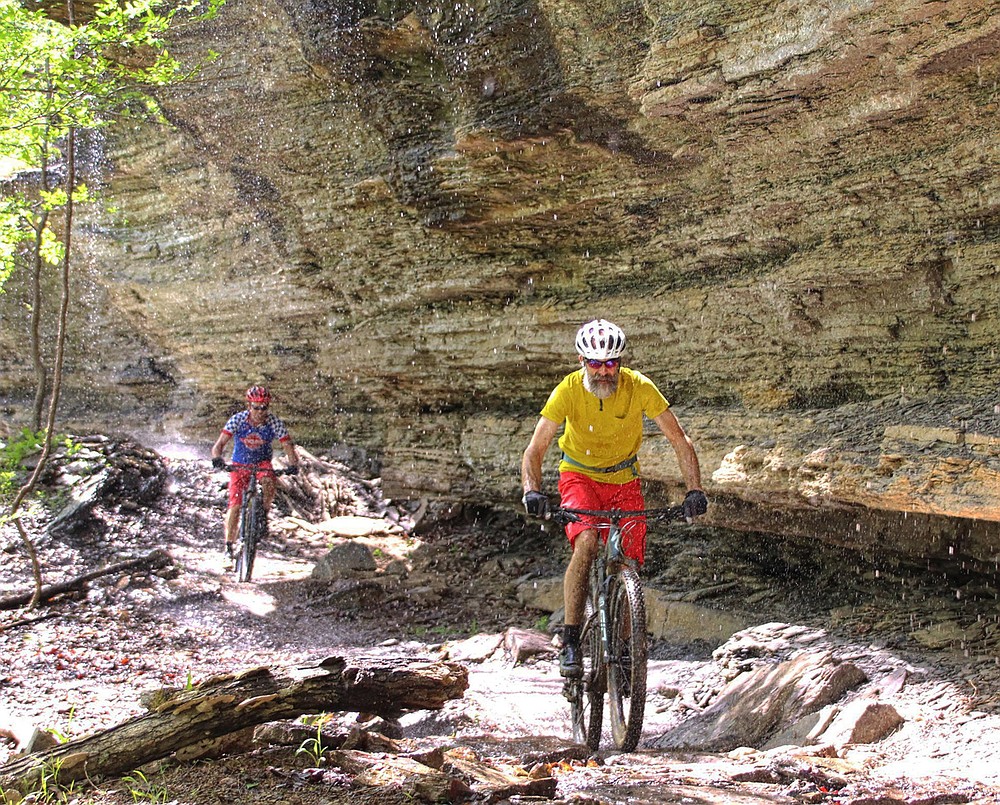 With the 19-mile Monument Trail system that opened May 6, Devil’s Den State Park adds to the region’s appeal to bicycle riders and hikers. (Special to the Democrat-Gazette/Bob Robinson) 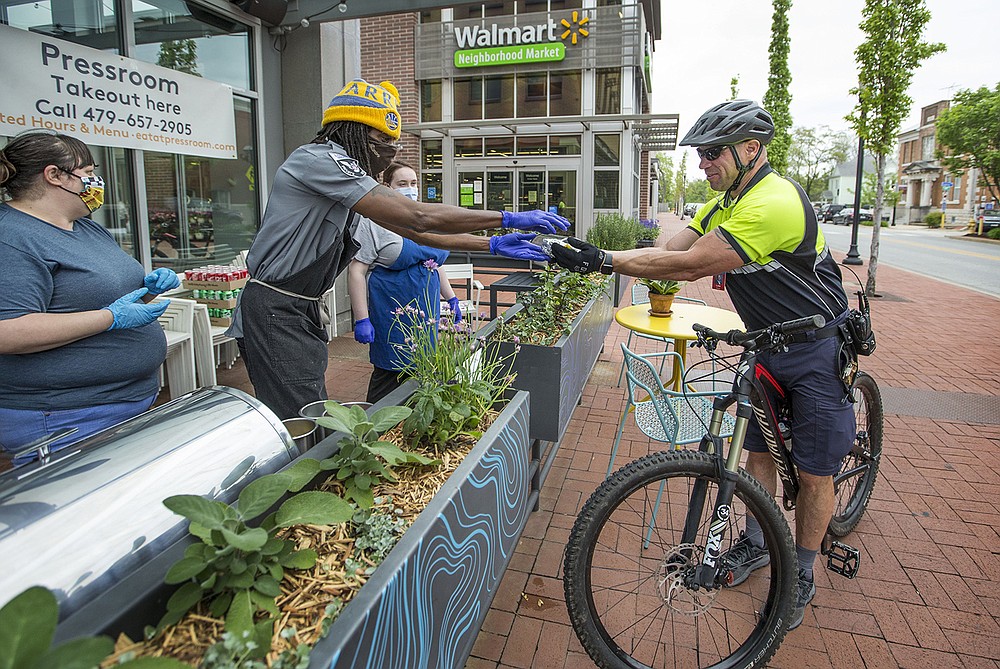