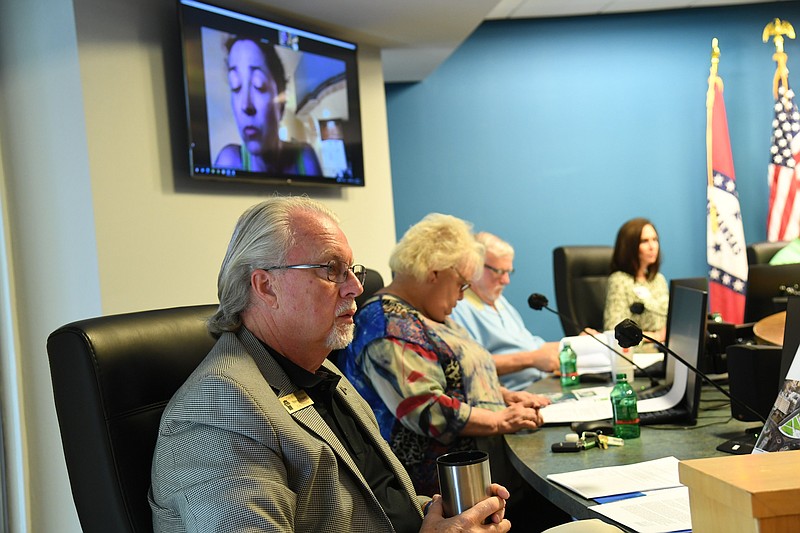 The Hot Springs Board of Directors listens to the proposal R.A. Wilson Enterprises made for the Majestic Hotel property Tuesday. - Photo by Tanner Newton of The Sentinel-Record

HOT SPRINGS -- With downtown parking already at a premium in Hot Springs, The Majestic, the outdoor entertainment venue proposed for the Majestic Hotel site, promises more competition for a limited number of spaces.

But a parking study presented to the Hot Springs Board of Directors last week said the downtown parking inventory can accommodate 135% of the venue's parking needs. The study by Peters & Associates Engineers commissioned by Rick Wilson, president and CEO of R.A. Wilson Enterprises, the development firm that's proposed building a 6,000-capacity venue on the 5 acres the city owns at 100 Park Ave., estimated 2,400 spaces will be needed.

Wilson has offered the city $2,163,128 for the property, telling the board construction could begin next March, with the venue hosting its inaugural event in March 2023, if it approves the real estate contract presented earlier this week.

The study said the combination of on-site, nearby off-street, hotel and shuttle-point parking totals 3,244 spaces. The 1,690 spaces the study identified as within walking distance from the venue reach as far south as Chapel Street and Convention Boulevard.

The 1,244 spaces serviced by shuttles taking patrons to and from the venue included city-owned lots on Convention Boulevard and privately owned lots in the Market and Broadway street areas. The study also identified the Arkansas Alligator Farm and Petting Zoo's parking lot as a shuttle point.

The 110 on-site spaces would be reserved for VIP ticket holders and people with disabilities. The study noted 32 area hotels offer shuttle service, and that some are within walking distance of the venue. Hotel parking accounted for 200 of the more than 3,200 spaces the study identified.

Spaces the study said will be available during the venue's March-through-October schedule include numerous privately owned lots. Wilson told the board the owners have agreed to make their lots available for patrons of The Majestic, but some directors were skeptical.

"We've had studies in the past that indicated we had adequate parking," Mayor Pat McCabe told Wilson. "I'm always very suspect of that conclusion. I also suspect some of those are probably not going to be as accommodating. Some of those lots identified already have leases for a certain number of spots. You have some parcels identified where I would find it hard to believe that's going to happen."

City Attorney Brian Albright suggested the deliverables section of the real estate contract the board will consider at its July 6 business meeting could include the agreements Wilson said he has with private lot owners.

Wilson told the board he was amenable to the suggestion but cautioned that some of the lot owners may be reluctant to publicly disclose they have agreements with the venue. R.A. Wilson Vice President and General Counsel Larry Yancey told the board there's ways to present proof of the agreements without making them public.

"There are other ways we can validate the contracts in place without necessarily making them public documents," he said.

City Director Erin Holliday questioned the study's demand estimate of 2,400 spaces, a number based on 2.5 people per vehicle. The patrons-per-vehicle estimate came from traffic counts conducted during concerts at the Walmart Arkansas Music Pavilion in northwest Arkansas. Wilson told the board he's negotiating an agreement that would delegate The Majestic's operations to the Walton Arts Center, the owner and operator of the 11,000-capacity Walmart AMP in Rogers.

"The use seems a little bit low," Holliday told Wilson and Ernie Peters, president of Peters & Associates. "Did you consider the Springs Hotel hopefully will open back up after renovations, and the Medical Arts building. The Arlington's capacity will go up as well. The 35% I think is not going to cover all these other things being up and running hopefully in the next couple of years. Did that enter into any of your internal discussions?"

Peters said the study didn't account for other sources of parking demand, but that it also didn't allow for the mitigating effect of ride-sharing. Wilson said more than a third of the Walmart AMP's patrons get to and from the venue via ride-sharing services.

A coupon for a free Uber or Lyft ride to and from The Majestic would be included with the ticket price. The details would be fleshed out during the 270-day due-diligence period Wilson requested, but he said the contract with Uber would probably be from 3:30 p.m. to midnight and provide free rides within a 10-mile radius of the venue. Performances would be held from 5-10 p.m.

"We'll be importing Uber drivers from other areas," Wilson told the board. "We have a negotiated agreement with Uber to bring 570 drivers from within a 60-mile radius of Little Rock to Hot Springs."

Several directors expressed concern about patrons crossing the street en masse, but Peters said they're likely to exit the venue in intervals.

"A lot of the patrons I suspect will not be on such a fixed schedule that they have to leave immediately," he told the board. "Some may choose to linger. Some may be more leisurely about their departure. The rush at the end is somewhat dampened by that type of choice."

City Director Carroll Weatherford said the board was too concerned about parking, telling his colleagues that parking limitations shouldn't disqualify the proposal.

"We're beating this parking thing to death," he said. "Downtown has been there for 100 and something years. There's never a parking place. I just don't want us to use something like that to prohibit these people from being able to build this."

"They find a parking place somehow, whether it's Uber or whatever it is," he said. "They'll get there."

Wilson, a Hot Springs native, told the board parking has been a long-standing issue downtown.

"I'm 66 years old," he said. Parking "was a problem when my mother was walking me up and down the sidewalk, taking me to Ricky's to buy my clothes in the first grade. It was a problem then, and it's a problem now." 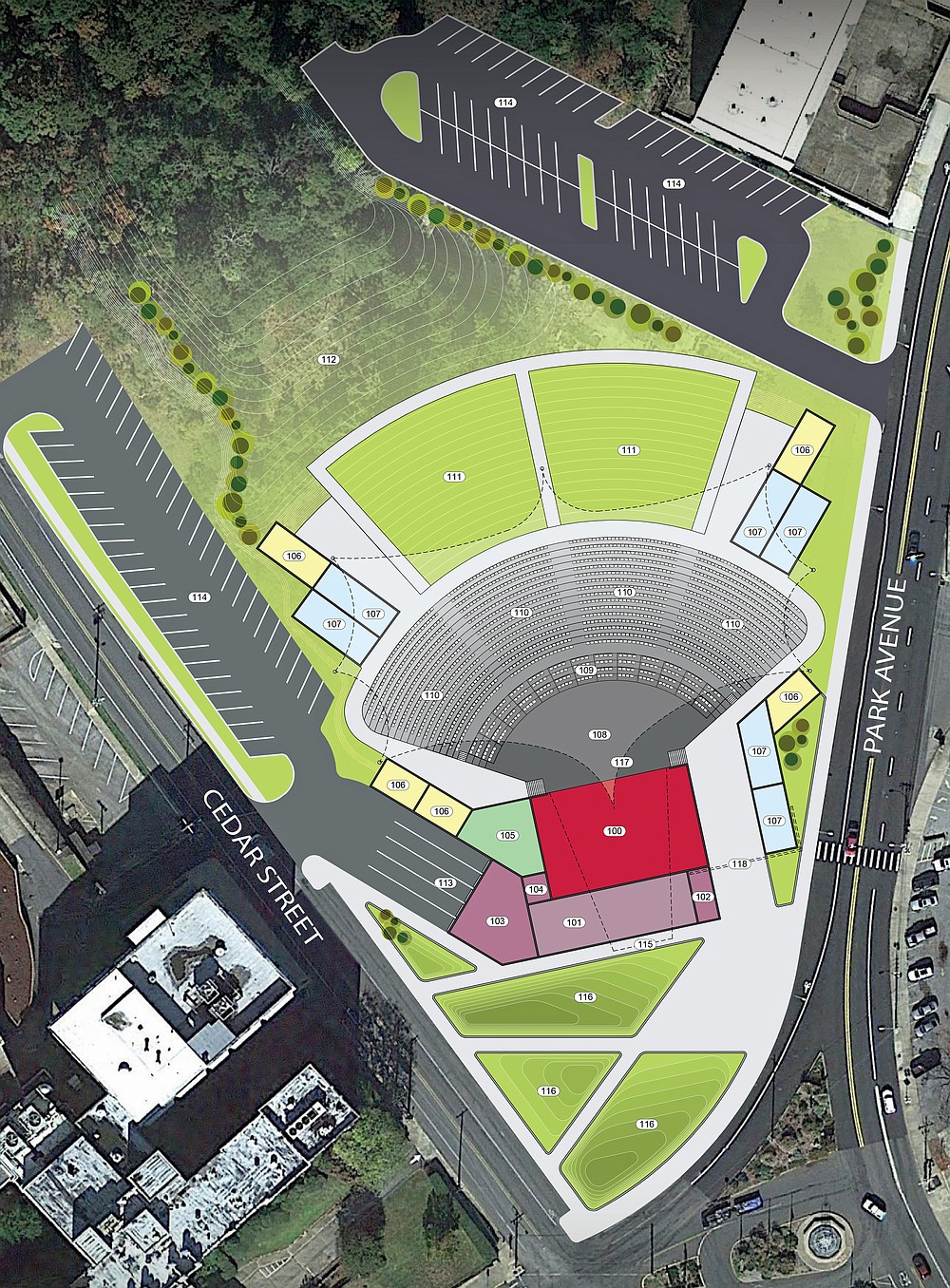 The site plan concept for The Majestic, the outdoor entertainment venue proposed for the Majestic Hotel site, was presented to the Hot Springs Board of Directors Tuesday. - Submitted photo