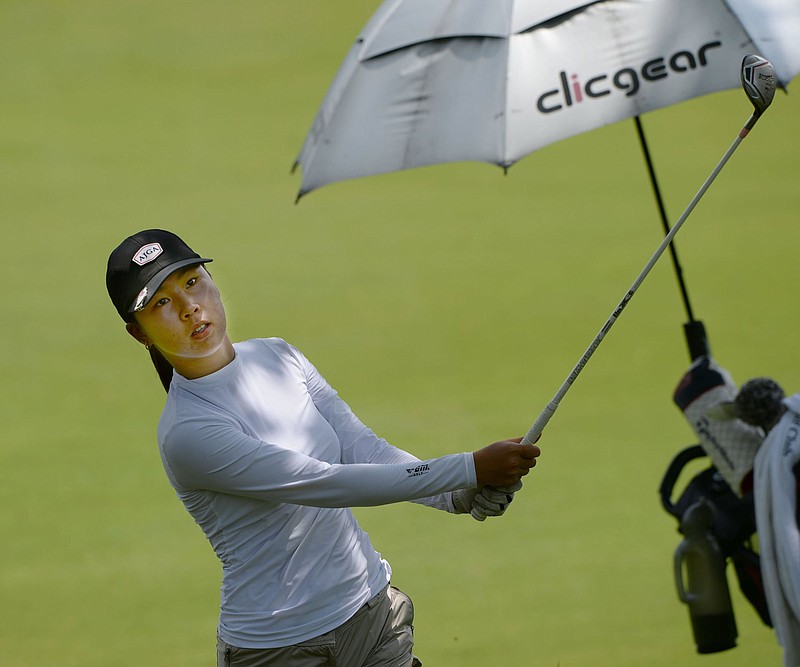 Gloria Nip of Port St. Lucie, Fla., watches her shot on the 16th fairway Thursday during the final round of the AJGA Stacy Lewis Junior All-Star Invitational at the Blessings Golf Club in Johnson. Nip defeated Olivia Dunn in a four-hole playoff. More photos at arkansasonline.com/625ajga/. (NWA Democrat-Gazette/Andy Shupe)

Gloria Nip and Olivia Duan finished in a tie at the conclusions of the three-day tournament, but Nip ousted Duan in a four-hole playoff after a two-under 70 in the final round to capture her first American Junior Golf Association victory.

"I feel really good," Nip said with the championship trophy in hand. "This does a lot for my confidence, especially since this was an invitational. I'm very confident now heading into my next tournament."

Nip, a 15-year-old from Port St. Lucie, Fla., entered Thursday's play tied for fourth. On a windy last day of competition, she was able to make the right adjustments to bypass those ahead of her, and finish No. 18 tied atop the leaderboard.

This sent her into a playoff with Duan, who began the day leading the girls' division. The extra play didn't come without drama.

"I was really nervous on No. 1," Nip said. "But then we both tied, so I calmed down some. And then on No. 2 I made a bogey, so I was having a panic attack on the green. Then she bogeyed too, and my next two pars were enough to get it done."

On the boys' side of play, Tip Price finished with an overall even-par score and was able to protect the lead he entered Thursday with.

"This is my first AJGA win, and it was probably in the biggest one I've played in," Price said. "It felt really good to win, and hopefully I will get into some more good tournaments and try to also place well in those."

He pointed to the windy conditions as causing some difficulty for all 56 players.

The invitational is unique in having an overall boys versus girls challenge. Entering this year the record was knotted at 3-3, but with the boys winning by six strokes, they grabbed the series advantage 4-3.

University of Arkansas alum Stacy Lewis, a four-time collegiate All-American and decorated LPGA golfer, began her support of this invitational in 2015 when she was rated the No. 2 player in the world. She and sponsorship partner KPMG created the event with a mission to promote equitable and friendly competition, all while demonstrating the importance of ethics and integrity within the game.

During the invitational, boys and girls were put into 28 mixed pairings with 17 states, seven countries and 10 players rated in the top 100 Rolex AJGA Rankings.

At The Blessings, Johnson