Walmart goes from fries to sushi 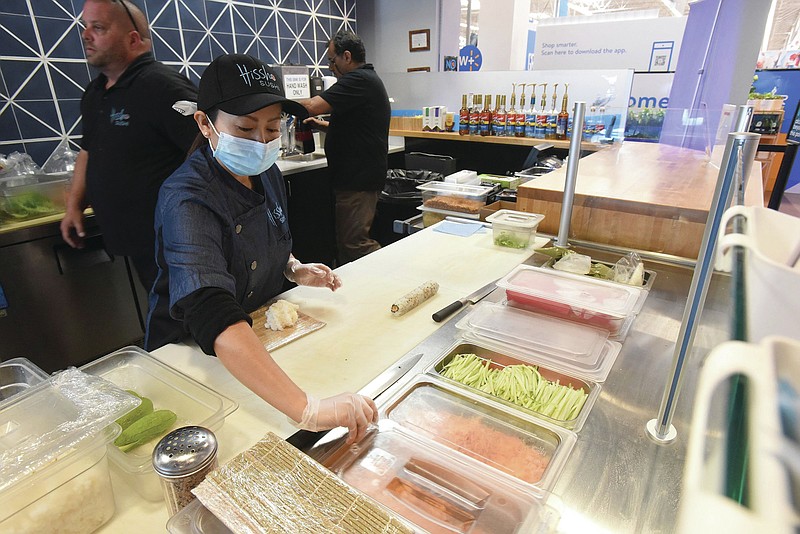 From sushi to salad and cheesecake to cheesesteak, Walmart Inc. is testing a number of options to fill leased space in its stores formerly occupied by McDonald’s restaurants.

The fast-food burger chain, once in hundreds of Walmart stores nationwide, gradually pulled out of most of them over the past few years until it reached Walmart’s target of 150 McDonald’s, Walmart spokeswoman Molly Blake-man said.

Filling those vacated spaces is an ongoing process that was hampered somewhat by the pandemic, another Walmart spokeswoman, Avani Dudhia, said. But now as businesses begin to reopen, the Bentonville-based retailer is rapidly moving forward with that process, she said.

Walmart is making use of the newly available leased space to bring in a wide range of businesses and services. Dudhia said Walmart aims to make its stores “a one-stop-shop experience,” with a variety of services that meet their needs.

“We’re creating an ecosystem that pulls together everything a customer needs curated in one store — postal, vet, personal care, restaurants, home improvement” and much more, Dudhia said. “We want customers to check everything off their to-do list while in our stores.” Walmart’s strategy for selecting those services is guided by its customers “while keeping efficiency and affordability top of mind,” Dudhia said. “The businesses we partner with reflect the needs of the communities we serve.” Though much is still being worked out, Walmart revealed a sampling of businesses that will set up in stores around the country. Some already open are in the testing stage, the company said, while others just recently signed on.

North Carolina-based Hissho opened its first in-store eatery in February 2020 at a Meijer supermarket in Brighton, Mich. Hissho operates sushi bars in airports, hospitals, universities and corporate food service, according to its website.

Hissho also provides fresh sushi for Walmart store delis and other supermarkets, and is looking for franchisees as well as other retail partners.

Wa l m a r t i s n ’ t s ay i n g whether any other businesses are open or planned for its vacated restaurant spaces in Arkansas. But Dudhia said Walmart will continue opening its own Tech Service Bars in stores this year, with one set to open in a few weeks at the supercenter on South Pleasant Street in Springdale.

The service bars, where technicians help customers with their smartphones and other digital devices, are typically placed in stores’ electronics section, she said.

Elsewhere, La Madeleine French Bakery & Cafe is opening 10 stores in the Dallas-Fort Worth area. One of these is set to open next month in the Dallas suburb of Garland.

A major player in Walmart’s new game plan is Ghost Kitchen Brands of Toronto. The innovative concept lets customers order, using either an app or on a touchscreen, their favorite dishes from a number of partner restaurants.

Ghost Kitchen Brands will open its first few U.S. sites in the next few weeks, Dudhia said, while some opened earlier this year in Walmart’s stores in Canada.

National fast-food chain Taco Bell is being tested in just one store, Dudhia said, while the much smaller Charleys Philly Steaks will open in about 10 Walmart stores, mostly in the Northeast. Charleys currently offers its famous cheesesteaks to stand-alone shops in North Little Rock and Jonesboro, as well as about 600 other cities.

Not all of the businesses Walmart is testing are restaurants, though. A chiropractic operation called The Back Space said Monday that it will open 10 pilot clinics inside Walmart stores in central Tennessee, with more pilot sites to be announced over the next few months.

Walmart is especially reaching out to Black-owned businesses, Dudhia said. Mayvenn, an online hair extensions and wigs business, opened its first store salon inside a Houston-area Walmart earlier this month.

Some Walmart stores are adding businesses based in their own backyards. Walmart wants to give locally owned barbershops and beauty services a chance to expand their businesses, Dudhia said.

“Barbers Inc. is a great example,” she said. The Charlotte, N.C., salon now has six sites open within Walmart stores.

Carol Spieckerman, a retail consultant and president of Spieckerman Retail, said Walmart’s large-scale relationship with McDonald’s “limited its ability to reach out to different demographic groups.” “I expect Walmart to flex multiple concepts in these spaces,” Spieckerman said, noting its intended mix of national chains and businesses with local appeal.

Walmart benefits from the leased-space model not just by collecting rent but also keeping shoppers in stores longer, Spieckerman said. Walmart even could become a dining destination, she said.

The potential to offer dining options in stores “aligns with Walmart’s focus on providing choice to shoppers,” she said. “Walmart has become the master of choice across other aspects of its business.” “Going forward,” Spieckerman said, “shoppers will have more dining options and fewer excuses to head for the door.”