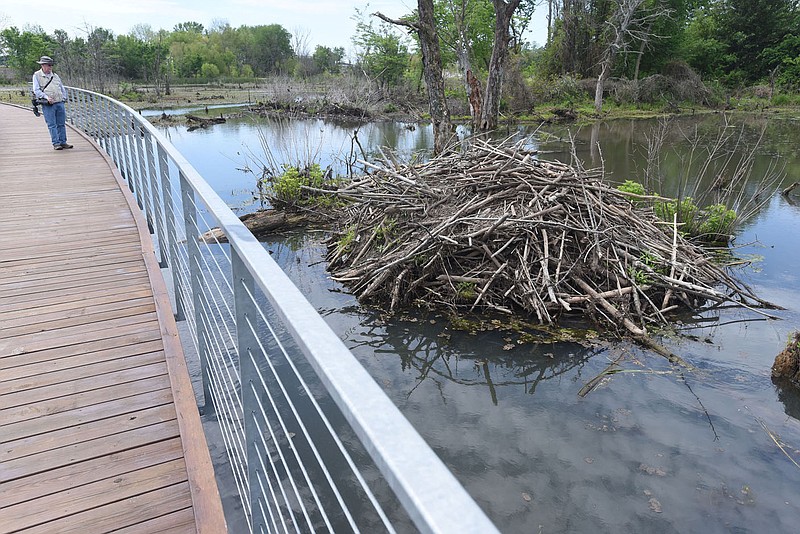 David Oakley looks at a beaver lodge May 14 2021 on a 12-acre wetland that is part of Osage Park in Bentonville. Boardwalks provide excellent access for exploring the wetland, its wildlife and vegetation. (NWA Democrat-Gazette/Flip Putthoff)

BENTONVILLE -- No need to pull on a pair of hip waders to explore one of the region's premier wetlands.

Wide boardwalks curve gently above the shallow water at this premier wetland in Osage Park in Bentonville. An incredible variety of plants and wildlife call this swamp environment home minutes from downtown.

There's a Taj Mahal of beaver lodges mere feet away from a walkway. Signs of beaver activity can be seen hither and yon throughout the wetland. Ducks, geese and songbirds sound a symphony of calls from the water and on the wing. Turtles and frogs barely peek their heads above the dark water that dresses a salad of vegetation.

[Don't see the video above? Click here to watch: https://www.youtube.com/embed/_YaObxYsjTQ]

Not all of the wetland is wet, especially in dry times. Tall stands of grass sway in the breeze. Black dirt dries in the sun until the next deluge fills the wetland to the brim.

Not far away, people play pickleball and have picnics at Osage Park, founded and managed by The Peel Compton Foundation of Bentonville. It's the wetland that brings wildlife watchers like Joe Neal and David Oakley to the park.

Neal came mostly to see birds at Osage Park when he and Oakley visited in mid-May. Neal, of Fayetteville, is active with the Northwest Arkansas Audubon Society and has written books and countless articles about birds and bird watching. Oakley, of Springdale, is an expert in the ways of dragonflies and damselflies. He goes home with a camera full of stunning dragonfly photos after forays into places like Osage Park.

Both started exploring the wetland long before it became part of a park.

"We'd start at Lake Bentonville, and there was a little trail through here," Oakley said during a boardwalk stroll. "You couldn't walk far until you'd start to get wet."

Neal, too, has a long history with the wetland.

"Back in the '80s and '90s, we used to come here because this spot had the only nesting pair of willow flycatchers," he said. "It's one of the last places in the state where they nested. They've probably been gone 20 years now."

Alan Bland of Rogers, a retired park ranger at Beaver Lake, joined the group. Land-dwelling wildlife are more his interest. At one watery tract, Bland pointed out water trails, each about 12 inches wide, that meandered through mats of wetland vegetation. Beavers make the trails during their nocturnal foraging and dam construction, he said.

"Beavers create wetlands by making dams that create stable, shallow water," Neal explained. "Then other critters come like birds, snakes and insects. The diversity in here is tremendous."

Visitors who aren't wildlife experts can enjoy an equally rich walk through the wetland. The group saw a gaggle of four crows harassing a flying red-tailed hawk. Purple martins and red-winged blackbirds flitted about and perched on branches. Interpretive signs help visitors learn about the role of wetlands.

That includes wetlands in the middle of town, like the one at Osage Park. 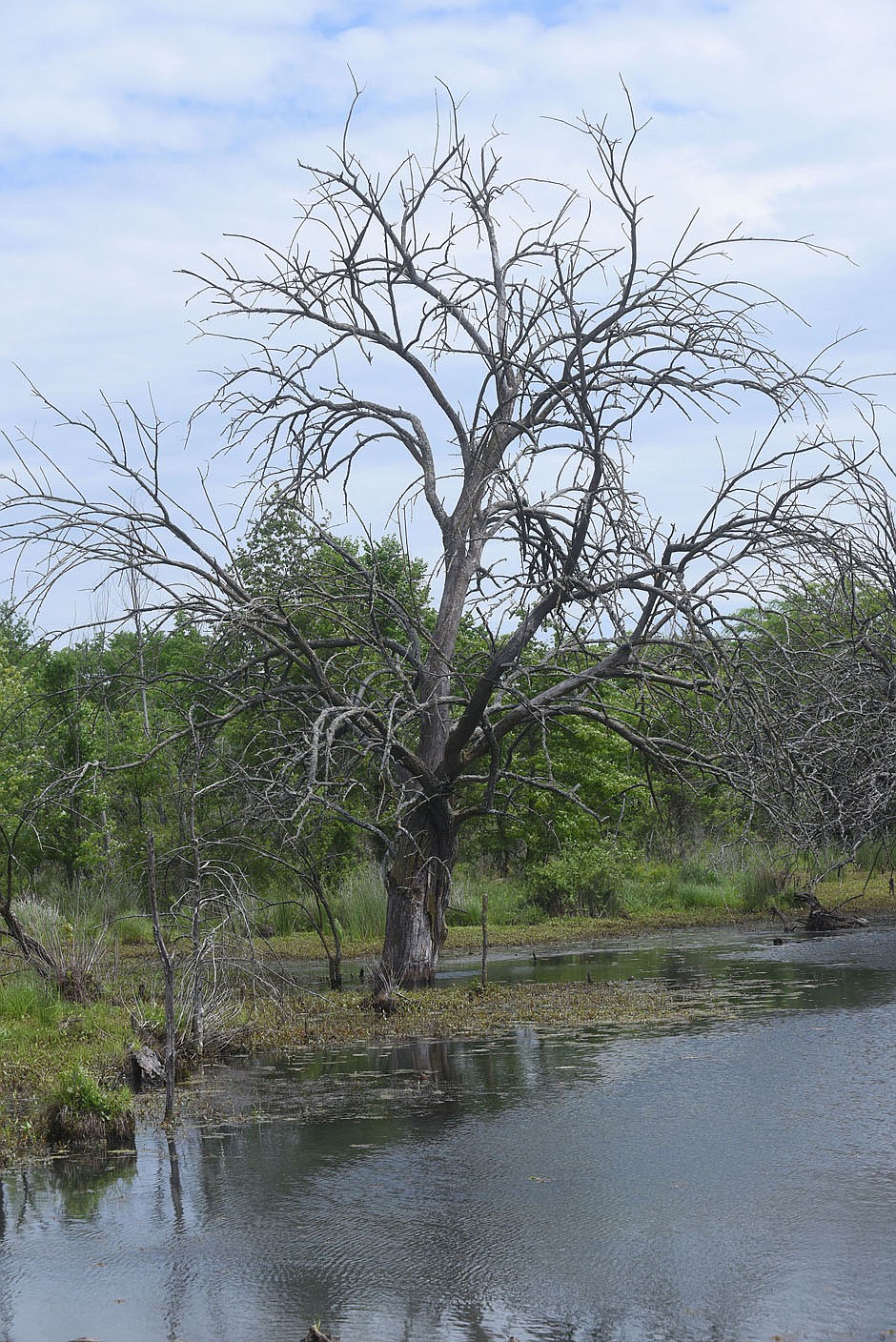 Branches go in all directions on a tree May 14 2021 in the Osage Park wetland. (NWA Democrat-Gazette/Flip Putthoff) 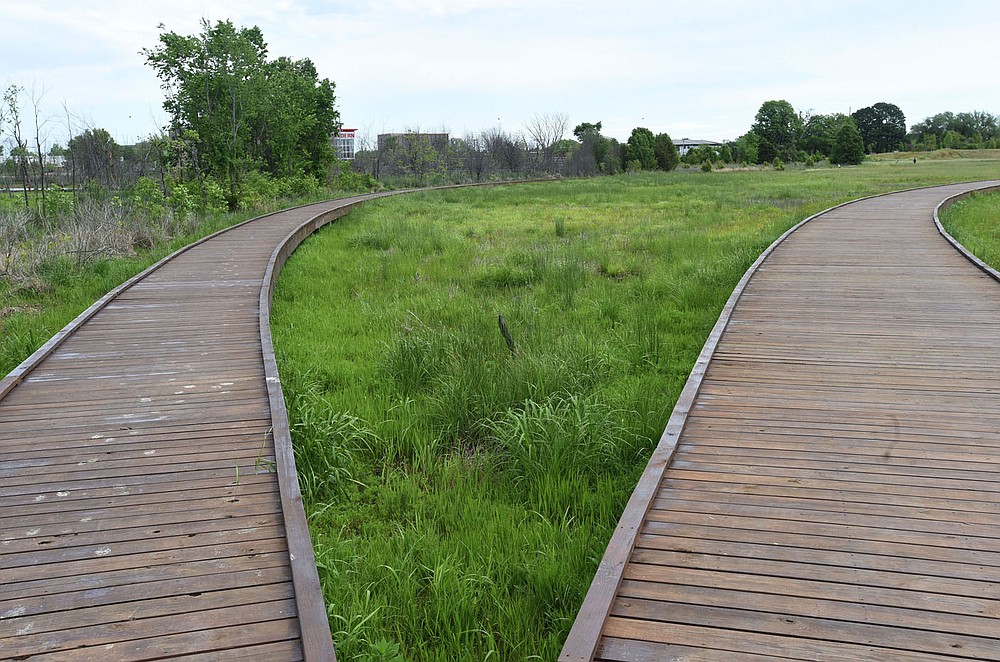 Dry and wet areas can be seen from boardwalks at the 12-acre wetland. (NWA Democrat-Gazette/Flip Putthoff) 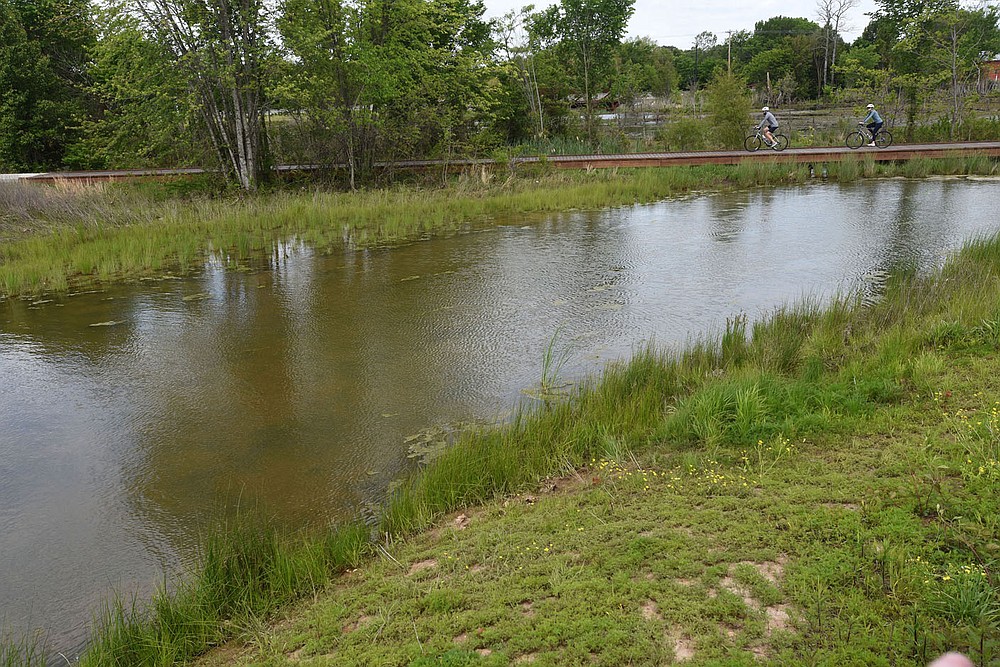 Bikers roll across the wetland near the Lake Bentonville spillway at Osage Park. (NWA Democrat-Gazette/Flip Putthoff) 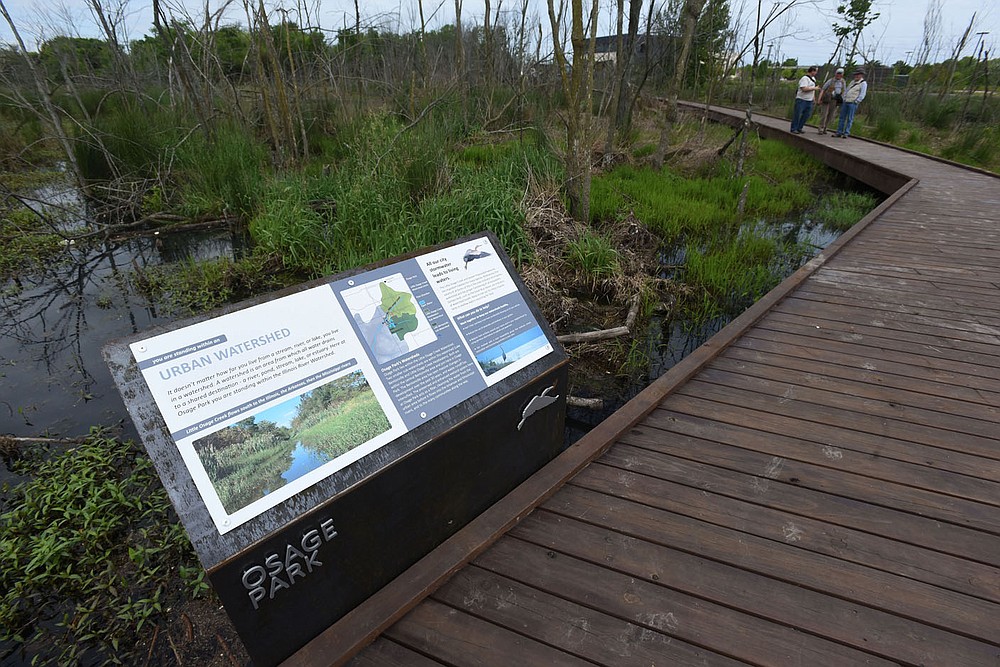 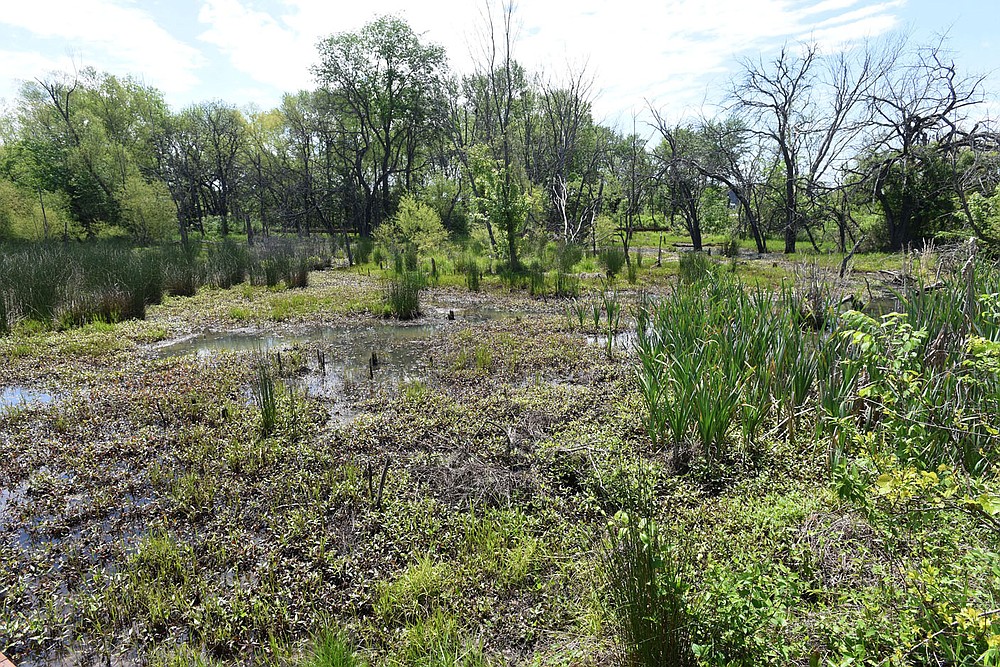 Dozens of flower, plant and tree varieties make up the diverse ecosystem of the Osage Park wetland. (NWA Democrat-Gazette/Flip Putthoff) 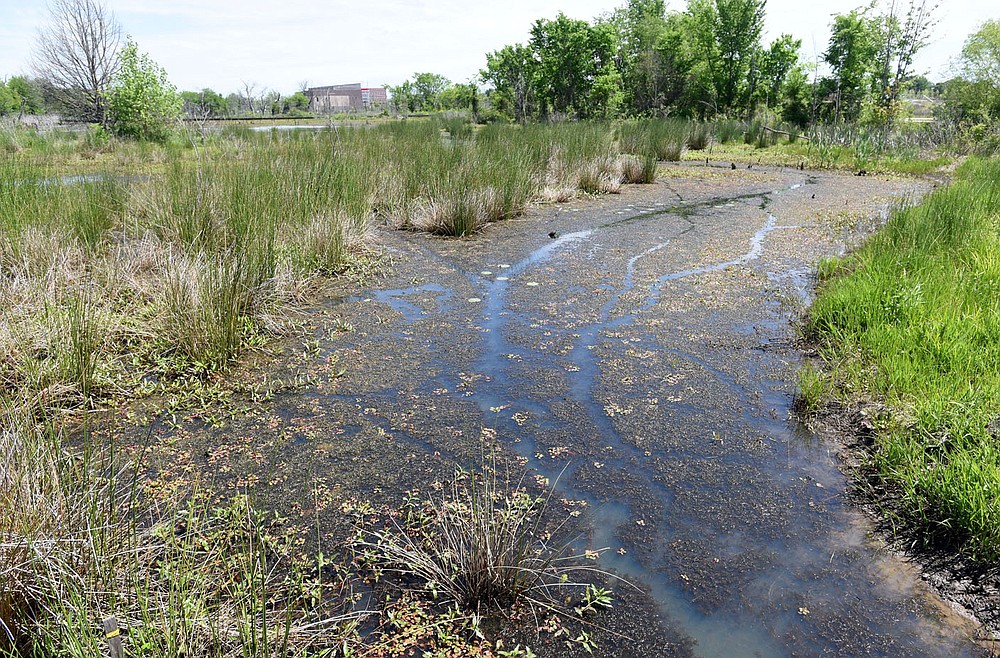 Beaver trails can be seen on parts of the wetland. (NWA Democrat-Gazette/Flip Putthoff)
More News

Osage Park has a pavilion with picnic tables, pickleball courts and walking trails in addition to the wetland. Refreshments may be purchased at a food truck near the pavilion.

The main address is 700 S.W. 16th St., in Bentonville. Another convenient access is at Lake Bentonville, along Southwest I Street near Thaden Fieldhouse.