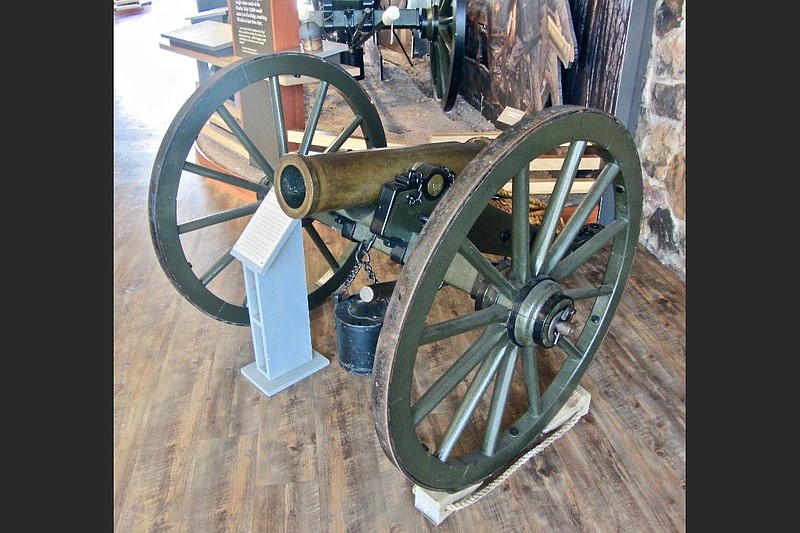 On display in Pea Ridges visitor center is a replica of a Model 1841 mountain howitzer used by Union artillerymen. (Special to the Democrat-Gazette/Marcia Schnedler)

PEA RIDGE NATIONAL MILITARY PARK — The Civil War was still in the early stages of its four blood-soaked years on March 7-8, 1862, when mostly untested Union and Confederate troops fought for two days in the northwest corner of Arkansas.

In Civil War annals, the Battle of Pea Ridge is less known nationally than such storied battlefields as Bull Run, Antietam, Vicksburg and Gettysburg — although one historian did call it "the Gettysburg of the West."

The visitor center puts a human face on the seesaw combat, which came when Civil War strategy and tactics were still being formed. Exhibits convey not only the horrors of battlefield carnage but also the miseries of civilians affected by the fighting. 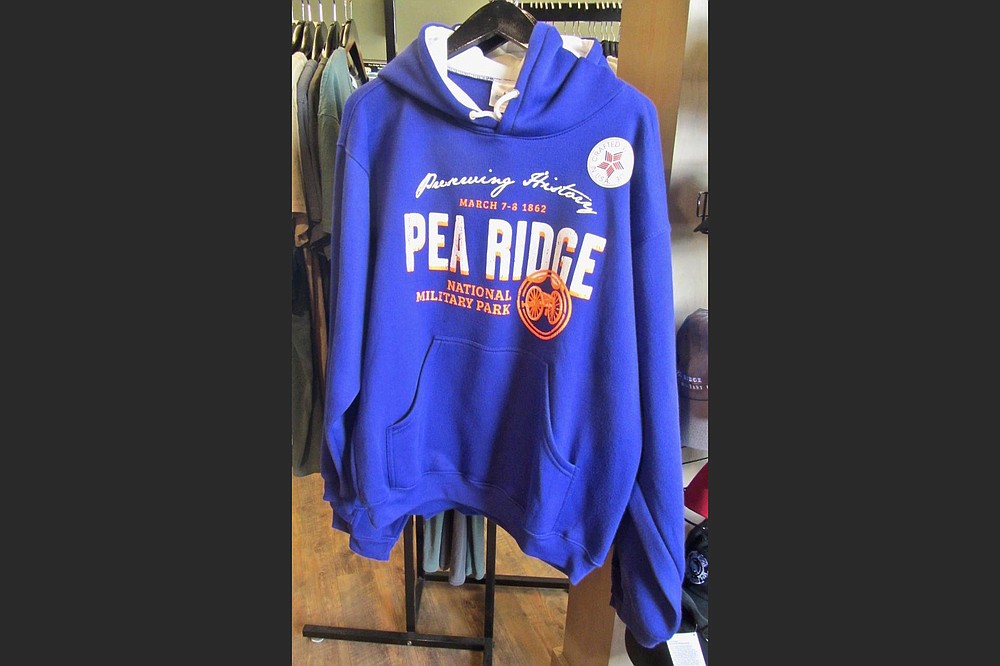 The gift shop at Pea Ridge National Military Park sells a variety of merchandise themed to the battle. (Special to the Democrat-Gazette/Marcia Schnedler)

A tableau of weary farm families, headlined "Farmsteads to Battlefields," reports that "the two days of fierce combat wrecked this farm economy. Few could plant their blood-soaked fields in time to make a crop before the next winter."

Military casualty figures testify to the intensity of the combat. Union dead and wounded totaled nearly 1,400, while Confederate losses were estimated at 2,000. That amounted to almost 15% of the 23,000 men engaged in the fighting.

A posted quotation from Confederate Pvt. Asa Payne sums up the mixture of bravado and fear amid the fighting:

"I remember some of our boys would laugh and mock the shells, and others were as pale as death, while still others had great drops of sweat on their faces. Here was a place that tried men's souls." 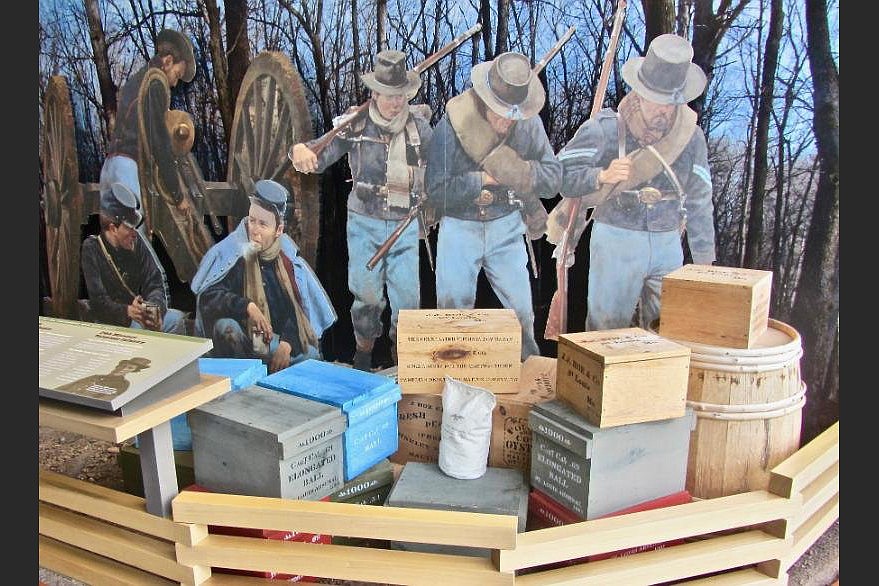 Union soldiers of the Army of the Southwest are portrayed with battle supplies. (Special to the Democrat-Gazette/Marcia Schnedler)

Virtually all the Pea Ridge combatants were volunteers. Their motivations, recounted in a panel headlined "Duty, Honor, Combat," were varied:

"Some left home for a great adventure. Some volunteered because they did not want to shirk their duty as a citizen. Some fought to defend their homes and the honor of their towns and states. In combat, some found themselves fighting to not let their comrades down and not be thought a coward."

The battlefield itself is considered one of the Civil War's best preserved, hardly touched by commercial intrusion over the century and a half since the combat. Its 4,300 acres largely preserve the woods and rolling hills where the fighting happened. The site can be toured on a 7-mile, one-way road with 11 stops marked by vividly illustrated National Park Service signs.

Stop No. 4, labeled "Leetown Battlefield," is noteworthy because two Confederate generals, Benjamin McCulloch and James McIntosh, were killed here by enemy fire within minutes of each other. The loss of those commanders brought confusion that played a large role in the Southern defeat.

At Stop No. 5, "Armies Collide," a sign reports that Pea Ridge was the only major Civil War battle in which American Indian troops fought. About 1,000 Cherokees joined the Confederates and routed Union cavalry before Northern cannon fire forced them to take cover in the woods. 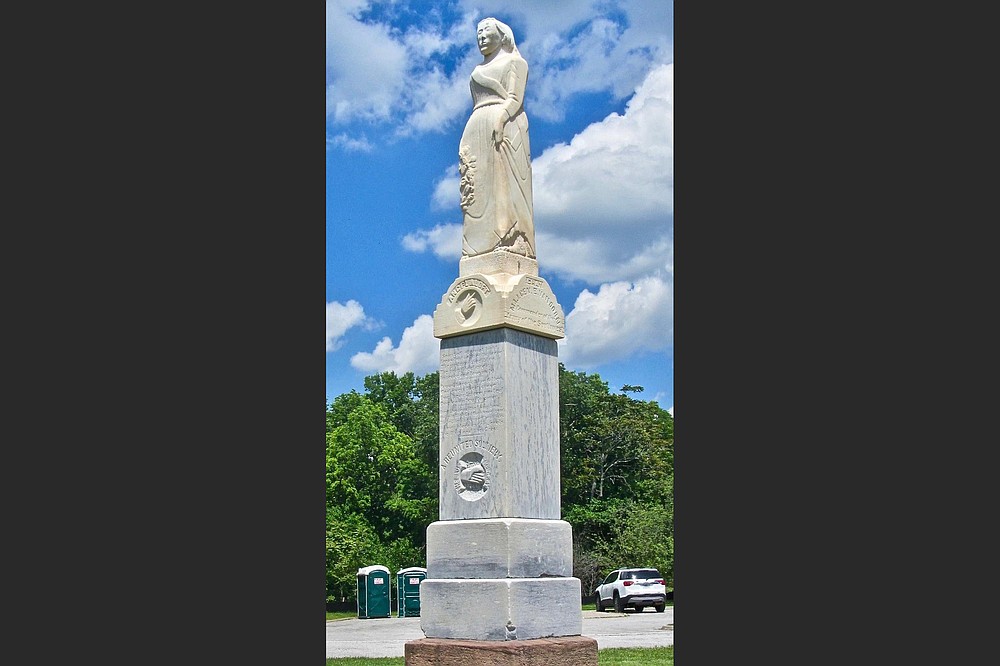 A post-war monument is focused on reconciliation between veterans of Pea Ridge. (Special to the Democrat-Gazette/Marcia Schnedler)

The best view of the battlefield comes at Stop No. 7, "East Overlook," where a 150-yard path leads to a shelter overlooking the fields below. Stop No. 8, "Elkhorn Tavern," provides a photo opportunity at a replica of the building captured by Confederate forces on March 7 and retaken by the Union side the next day. It was used as a field hospital during the fighting.

Several wheeled cannons at Stop No. 9, "Confederate Sunset," mark the battle lines on the decisive morning of March 8, after devastating Union musket and artillery fire the previous dusk had driven Southern troops back into the woods.

Another sign, labeled "That Beautiful Charge," conveys the sense of triumph on the Union side, expressed by Capt. Eugene B. Payne, an Illinoisan:

"That beautiful charge I shall never forget; with banners streaming, with drums beating, and our long line of blue coats advancing upon the double quick, with their deadly bayonets gleaming in the sunlight and every man and officer yelling at the top of his lungs."