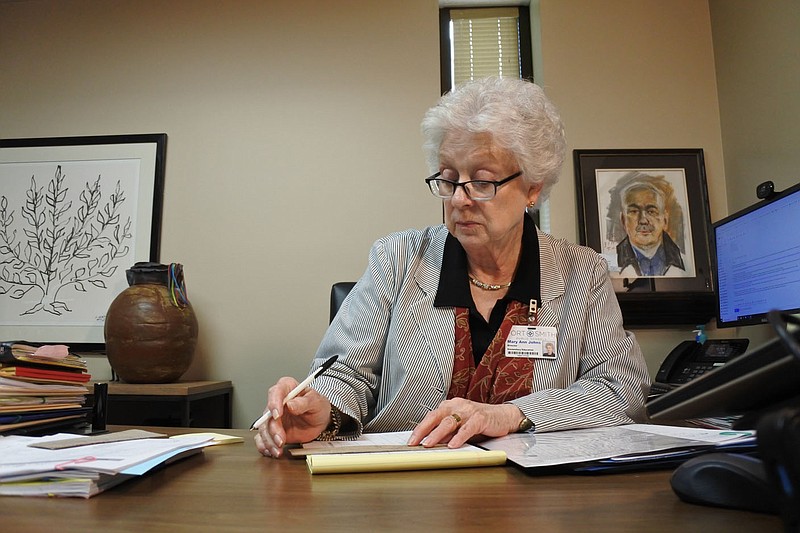 FORT SMITH -- Mary Ann Johns said she plans to rest, read for pleasure, travel and volunteer at Mercy Hospital or the public library after she retires.

Johns, 75, will complete her tenure as the School District's director of elementary education June 30. She has held that position for 29 of her 46 years with the district.

Working with Johns has been a pleasure, Superintendent Terry Morawski said.

"Her contributions to Fort Smith Public Schools are many, and we will continue to see the impact of her influence for years to come," Morawski wrote in an email. "We all wish her the very best in her retirement."

Johns has the most years of service of all the district's retirees this year, according to Christina Williams, the district's coordinator of public information.

Johns said a woman who once held her position, Ernestine Hunter, told her she would know when to leave. She believes, despite still being in good health, that it's time for her to move on.

"It's not that I don't enjoy it anymore," Johns said. "It's not that. In fact, I find so much exciting right now about education."

Johns said she started working for the district in June 1975 as a coordinator of special education, serving in that role for nine years. She then became an instructional supervisor, a position in which she helped establish the district's gifted and talented program.

Johns became director of elementary education in 1992, a job that entails supporting the operation of the district's elementary schools and their principals.

Johns said prior to arriving in Fort Smith, she graduated with a bachelor's degree in elementary education in 1967 and a master's degree in special education in 1973 from the University of Central Arkansas in Conway. She also had experience teaching elsewhere, including Columbus, Miss.; Little Rock; Memphis, Tenn.; and the university.

A university faculty member told Johns when she got ready to move to Fort Smith that the School District was "very good" and that she was very fortunate to have a job there. She found that sentiment to be true when she started working there.

Johns said she met her late husband, Forrest, after coming to Fort Smith as well. She would go on to earn a doctorate in educational leadership from the University of Arkansas in 1997.

Johns said she is probably the most proud of the expansion of opportunities the district has been able to provide to students as it grew.

The district not only has expanded certain programs over the years, such as its music and English language learner programs, but has added things such as the gifted and talented program and art education at the elementary level, Johns said. The Peak Innovation Center, scheduled to open this fall, will provide career and technology education for high school students and visual arts programming; it also will be doing more to help elementary students choose what they want to do later in life.

Ginni McDonald, executive director of strategic initiatives and professional learning for the district, said she and Johns developed a strong relationship during McDonald's tenure as the district's director of secondary education.

"Everything that she does, her attention to detail, every word she chooses, whether it's in written form or spoken form, she is just very thoughtful," McDonald said. "And that same thoughtfulness rolls over into her role as a leader."

McDonald said she will miss Johns' presence after she retires. Johns is the first person McDonald sees when walking into the office and often the last person she sees when walking out of it, arriving by 7:20 a.m. and not leaving until after 5 p.m. every day. She's also been seen working in the office on Saturdays.

"When she decided she was going to retire, she looked at me and she said, 'My last day will look just like my first,'" McDonald said. "And I just thought that was remarkable. You don't see that kind of work ethic and commitment and loyalty to an organization as what she continues to exhibit even at this point in her career."

The School District announced this month that Lori Griffin, principal of Ballman Elementary School since 2013, will take Johns' place as director of elementary education. The salary range for the position is $97,000 to $121,000 per year, according to Williams.