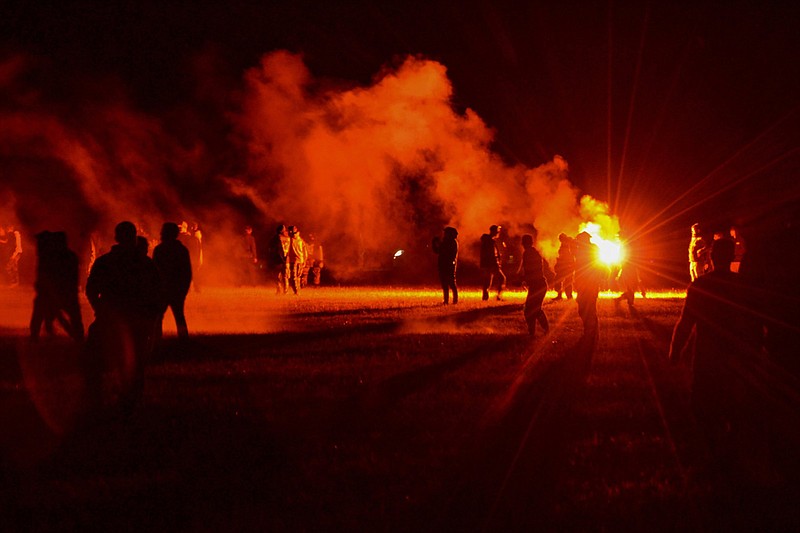 People stand in a field where partygoers were clashing with police officers Friday near Redon, France. (AP)

PARIS — French police clashed with revelers as they tried to break up an unauthorized rave in western France, authorities said Saturday. A 22-year-old man lost his hand and several others were injured in the violence, including police.

The violence happened in a field near the Brittany town of Redon on Friday night, just two days before France lifts an overnight virus curfew that’s been in place for more than eight months and has prompted growing frustration among young people.

Police repeatedly fired tear gas and charged clusters of partygoers who hurled metal balls, gasoline bombs and other projectiles, according to images posted online and comments by the top government official in the region, prefect Emmanuel Berthier. Authorities estimated that about 1,500 people took part in the event despite a local ban.

Berthier accused the attendees of “extreme” and “inexcusable” violence. It took police more than seven hours to disperse the crowd and authorities were still evacuating people from the field Saturday morning, Berthier told reporters.

Regional prosecutor Philippe Astruc said three investigations are underway, including how the 22-year-old lost his hand — possibly when he picked up an object that exploded.

MOSCOW — Russian President Vladimir Putin said Saturday that his foreign minister and his defense minister will head the candidate list for the dominant United Russia Party in September’s parliamentary election.

By placing Foreign Minister Sergey Lavrov and Defense Minister Sergei Shoigu on the list, Putin aims to increase voter enthusiasm for the party, whose support has been waning.

The Sept. 19 election for all 450 seats in the Duma, the lower house of parliament, is widely seen as an important part of Putin’s efforts to cement his rule ahead of the 2024 presidential election. The 68-year-old leader, who has been in power for more than two decades, pushed through constitutional changes last year that would potentially allow him to hold power until 2036.

Both Shoigu and Lavrov have substantial popularity for their firm positions on the military and challenges to the West. Being on the party list does not oblige them to take parliament seats if elected.

Notably absent from the list announced at a party convention was Dmitry Medvedev, the former president and prime minister who is United Russia’s chairman. Medvedev left the premiership in January 2020 and took the less-visible post of deputy chairman of the national security council.

DAKAR, Senegal — Guinea has declared an end to an Ebola outbreak that emerged in February and killed 12 people, according to the World Health Organization.

The latest outbreak was the first to emerge in Guinea since an outbreak from 2014 to 2016 killed more than 11,300 people in West Africa. That outbreak originated in the same region before spreading to neighboring Liberia and Sierra Leone.

“I commend the affected communities, the government and people of Guinea, health workers, partners and everyone else whose dedicated efforts made it possible to contain this Ebola outbreak,” said Tedros Adhanom Ghebreyesus, WHO director-general.

“Based on the lessons learned from the 2014-16 outbreak and through rapid, coordinated response efforts, community engagement, effective public health measures and the equitable use of vaccines, Guinea managed to control the outbreak and prevent its spread beyond its borders,” Tedros said. The U.N. said it will continue to provide post-illness care.

Dr. Matshidiso Moeti, WHO regional director for Africa, said that lessons learned from the last outbreak helped Guinea contain the virus in just four months. But she warned that vigilance must remain.

“We are getting faster, better and smarter at fighting Ebola. But while this outbreak is over, we must stay alert for a possible resurgence and ensure the expertise in Ebola expands to other health threats such as covid-19.”

MOSCOW — Russian news reports said searchers Saturday found the body of an American student who vanished several days earlier and that a man has been arrested on murder charges.

The body of Catherine Serou, 34, was found in woods near the city of Bor, 250 miles east of Moscow, the reports said.

Russia’s Investigative Committee said a woman’s body was found in Bor and that a suspect with a record of serious crimes had been arrested, but did not give names. The cause of death was not specified.

News reports said Serou was last seen Tuesday getting into a car. The newspaper Komsomolskaya Pravda said she sent an email to her mother expressing alarm that “unknown people” were driving her.

Serou moved from California to Russia in 2019 to study law at a university in Nizhny Novgorod, a major city near Bor, news reports said.