Hidden Gems: Best friends, cozy mysteries and a dead husband in every book 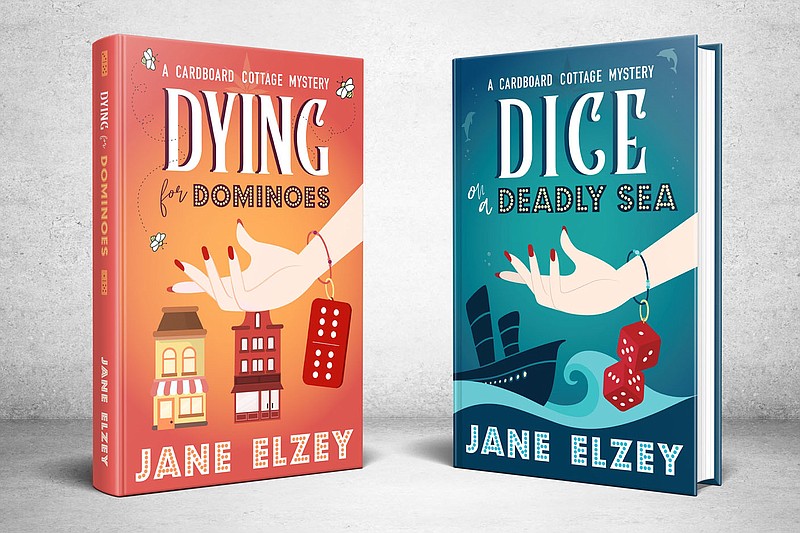 Read More Jane Elzey “Dying for Dominoes” and “Dice on a Deadly Sea” are both available on Kindle and in print from Amazon or visit the author’s website at www.CardboardCottageMystery.com, where you can get autographed copies and more. Book three, “Poison Parcheesi and Wine,” is slated for a May 2022 release. A podcast chat between Jane Elzey and Becca Martin-Brown is available at nwadg.com/podcasts.

"Hey, I've published a book. Don't you want to write about it?"

It's not unusual for a Features editor to get this question via phone, email, Facebook and even good, old-fashioned snail mail. And I have to admit, it makes me cringe just a little. It's so easy to self-publish. It's a lot harder to write a good story.

Jane Elzey, a Northwest Arkansas author who just published her second book, is good -- really good! Her "cozy" murder mysteries have twists and turns that would make Agatha Christie proud. Her characters are nuanced and very real, and I want very much to sit down with them for tapas and wine. She describes her first book, "Dying for Dominoes," as "a fast-paced misadventure through the back roads of Arkansas on the hunt for a killer on the run," and if you love rural Arkansas, you'll be right in your element.

"In the cozy mystery genre, readers can expect an off-camera murder without gore or depravity, little or no cursing, no sex, an amateur sleuth -- probably female -- and some sidekicks or friends who make solving the crime more fun," Elzey says. "The stories are usually character-driven and centered around a particular hobby or occupation. The Cardboard Cottage (series) refers to the main protagonist and amateur sleuth, Amy Sparks, who owns a vintage game shop. That's a very 'cozy' vibe. My characters, however, are anything but cookie-cutter sweet."

Two things make Elzey's books unique: Each has a game in the title -- "Dying for Dominoes" is followed by the new "Dice on a Deadly Sea" -- and in each book, a husband dies.

"One of the membership levels in the Jane Elzey VIP Club -- that's Very Important Players -- is the Killer Club," says Elzey, who is as delightful as her characters. "At this level, the member has the privilege of killing off a husband for an upcoming book in the series. It's their own game of 'Clue.' This is all tongue in cheek, of course, and I have full literary license, but what wife doesn't want her husband gone at some low point in the marriage? I have more husbands, ex-boyfriends, and bosses to bump off than I have plots imagined. I'll get there, though -- and it's exciting to ponder the possibilities!"

Elzey, a fifth generation Floridian, was a "Nancy Drew hound" as a child.

"I devoured every volume in the library in Vero Beach where I lived for much of my youth," she remembers. "I graduated to Agatha Christie in my early 20s. Over the years, I've read many mystery authors, but Carolyn Keene and Christie remain my old-time favorites, and of course, they have influenced me. I love the characters of the amateur sleuth and cozy mystery, as well as the puzzle the author lays out for you to follow. I admit, I never solved any of their crimes before the end!"

Armed with a degree in journalism from the University of Central Florida, Elzey worked as a freelance feature writer and later began publishing magazines with a tourism, arts or business focus. However, she says, "I like writing fiction more than I like writing fact. I love the creative aspect of writing from an imaginary place, plotting out the mystery and clues, creating characters I hope readers will enjoying hanging out with."

"My first mystery novel, 'Murder My Memoir,' will never see the light of day," she says with a laugh. "I think that was 1980-something. It was awful, as are most first books. The manuscript was lost somewhere in my move to Arkansas, and I suspect that was for the best.

"'Dying for Dominoes,' the first book in my Cardboard Cottage Mystery series, took me more than a decade to complete," she adds. "I wrote and rewrote and revised and studied, and became a better writer and storyteller each time. Writing a novel really is a process that requires much more than vocabulary and a keyboard."

In "Dying for Dominoes," readers meet four best friends "of a certain age," as they're sitting on a back porch, playing a game of dominoes. This is how Elzey describes them:

Amy Sparks, the narrator of the Cardboard Cottage Mystery, is the owner of Tiddlywinks Players Club, a vintage game shop in a tourist town in Arkansas. She's a bright almost 50-something who hasn't always made the right decisions in her life (including husbands), but since arriving in Bluff Springs, things have really turned around. Loyal to a fault, easily duped, and prone to misunderstandings, Amy is dedicated to her little clutch of best friends. Their success as business owners and best friends tops her list of needs. Except... husbands keep dying and the four of them keep looking guilty, all of which compel Amy to sleuth her way to the truth.

Rian O'Deis (say Ryan O-Day) is the tomboy of the group and owner of The Pot Shed at the Cardboard Cottage & Company. She's a wily one, not prone to idle conversation, crowds or rules that don't make sense. A deep thinker, a dedicated friend, and pious about pot, Rian grows cannabis for the Arkansas elite. She's rethinking her occupation now that she's smitten with a cop. "We're like Dave Starsky and Jane Goodall," Rian says. "Or Belle Starr and Dudley Do-Right."

Genna Gregory is the eldest of the foursome, but she works hard to look like the youngest. She imports her skin care regimen from France. Tall, svelte, rich and commanding (read: Boss Lady), Genna comes from old money and bright promise. Arkansas born and bred, Genna knows everyone who needs to be known in the Natural State, and she doesn't think twice about letting you know that. Her bark is louder than her bite, and deep down she wants love and acceptance just like everyone else.

Zelda Carlisle owns Zsa Zsa Galore Decor at the Cardboard Cottage & Company. The quote on the door of her shabby chic shop says a lot about Zelda. It's a paraphrased quote from Zsa Zsa Gabor (the whole quote wouldn't fit on the door!): "I like a mannish man: a man who knows how to talk to and treat a woman -- not just a man with muscles." A bit self-absorbed with her looks, her hair and her designer shoes, Zelda just wants to have a good time. And men keep getting in the way.

"Zack's being stubborn, and I don't like it," Zelda snapped. "I just need him to go away. Disappear. Vamoose." She snapped her fingers. "Like magic."

And when he does, her three closest friends -- so close they're like sisters -- are left to wonder if one or more of them helped him on his way.

"Zack. Yak. Zombie Zack. We all know him. Let me just say, I've been on a horse three times. I've been thrown off a horse three times. Marriage is the same rodeo," Elzey laughs. As for the four friends,"I see myself in all the characters here and there, but since the narrative is from Amy's POV, I feel I'm the closest to her. We think a lot alike. We're both superstitious. We are both Florida girls. The characters feel more like a composite of just about all the women I've had the pleasure of knowing. I am amused how people try to guess who I'm writing about, but they are all fictional characters in my head. Their closeness is something we all want if we don't have it, cherish if we do, and that includes the push and pull that makes for good story drama.

"People watching and eavesdropping are my favorite pastimes and research tools," she adds. "People say and do such story-worthy things! The idea for this little clutch of characters was based on friends and the dominoes we played one year. Their personalities morphed into completely different characters in my head, and have since come alive to me in that way, in that fictional realm. They often wake me up with something to say. 'Write this down,' one of them will say. I struggle to go back to sleep. 'Now!' she demands. OK, so I do it. I get up, and I let them have their say."

As Elzey describes her second book, "Dice on a Deadly Sea," the four friends dive into murder while celebrating the big five-O -- and another husband dies.

"In book two, we're on a birthday cruise in the Galapagos Islands, where these best friends charm their way through shark-infested waters, a mud spa they didn't anticipate, and sexy pirate with something to hide," she says. "In book 3, we're back in Arkansas, exploring the beautiful wine country. Oh, and another husband dies. Did I mention that? A husband always dies. In book four, 'Killer Croquet,' our destination is Ireland and the famous croquet tourneys of Cork, or more likely to become infamous tourneys once the Cardboard Cottage gals arrive!"

Book three, "Poison Parcheesi and Wine," is slated for a May 2022 release. Elzey chooses to self-publish -- but not in the traditional manner.

"After much research among genre writers and authors published by traditional houses, I knew I needed to create a publishing imprint of my own," she explains. "Thankfully, the industry has changed in the last couple of decades so that self-publishing no longer has an unfortunate stigma. I've been in the publishing industry for many years, and I knew I could either take on the roles or outsource the roles required of the process -- with the end result being a trade- and bookstore-worthy product.

"I outsource the cover design to my designer in Paris (France), developmental and copy editing to a book editor in Texas, book formatting and design to a professional book designer, and beta readers near and far. The challenge of self publishing is to know who to bring onto your team. Publishing is not a one-person job, and each of these people of expertise are essential for a trade-quality published book. And they all get paid before I do! Trust others to help your work shine.

"The advice other writers have given me is to keep writing," she adds. "The more you publish good work, the more you get noticed." 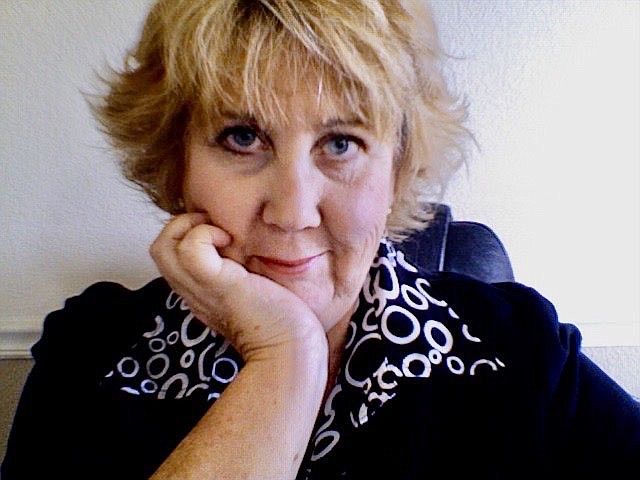 “Dying for Dominoes” and “Dice on a Deadly Sea” are both available on Kindle and in print from Amazon or visit the author’s website at www.CardboardCottageMystery.com, where you can get autographed copies and more.

Book three, “Poison Parcheesi and Wine,” is slated for a May 2022 release.

A podcast chat between Jane Elzey and Becca Martin-Brown is available at nwadg.com/podcasts.

Print Headline: Best friends, cozy mysteries and a dead husband in every book