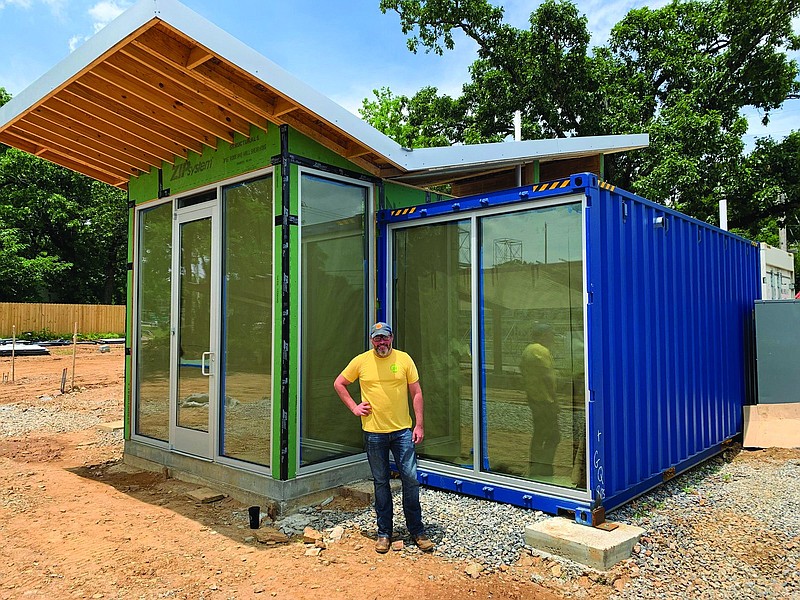 Investor Jeff Franklin stands at the site of a electric-car charging station in Little Rock’s Capitol View area. When it opens, the station will include indoor and outdoor dining areas and a spot for a food-truck. (Arkansas Democrat-Gazette/Andrew Moreau)

By next month, Little Rock's Capitol View area should have a new neighborhood gathering spot offering indoor and outdoor dining and a vegetable garden along with an adjacent artists' cooperative.

Little Rock sustainability investor Jeff Franklin is sinking about $2 million into two projects -- one in the capital city and another in Hot Springs -- to deliver electric car charging stations that offer dining options to enhance local neighborhoods.

"This is not just a Tesla thing," Franklin said of the charging bays. "We'll be able to accommodate all the new models that are rolling out. And another big plus is we'll have a nice gathering spot for the neighborhood."

The Little Rock location is at the Woodrow Street exit of Interstate 630 in the Capitol View/Stifft Station neighborhood. It is solar-powered with backup storage and has been under development since December.

Franklin is confident it will be ready to open next month.

The low-impact development will use shipping containers lined with cypress to offer indoor dining through vending operations. An outdoor patio area will allow customers to frequent food trucks that will be on-site on a rotating basis. The development is designed to use indigenous plants and trees, and to control water runoff. An adjacent solar-powered building has been restored to provide working space for area artists.

Down the road, Franklin would like to offer beer and wine, though he has not yet sought alcohol licensing.

"We're going to phase the whole thing in over the next few months," he added. ""This neighborhood was my old stomping grounds growing up. It will be nice to encourage investment that connects the historic Central High area and Hillcrest, and extend that corridor."

In Hot Springs the multiuse concept is the same, though the site at 311 Park Ave. will include a restored service station as the hub of its operations. That site will include a bar and small cafe.

Seal Solar of Little Rock is working with Franklin to handle energy storage at the facilities. "We're going to handle multiple facilities at both sites," said Cody Wilson, vice president of design and engineering for Seal. "The facilities are being built out so they remain operating during an energy outage."

Both operations are at the forefront of development of electric vehicle charging stations, Wilson said.

"Jeff is definitely ahead of the game with a pretty unique concept and is forward thinking in the development of charging stations like this," Wilson said. "This is the future, and it's coming fast."

Earlier this month, 7-Eleven said it will install 500 direct-current fast-charging ports at 250 locations across North America by the end of 2022. The charging ports will be owned and operated by 7-Eleven, as opposed to fuel at its filling stations, which must be purchased from suppliers.

About the same time, Tesla Chief Executive Officer Elon Musk filed for trademark protection for restaurants or diners that he wants to build as part of the company's charging stations.

ChargeHub, which monitors and tracks electric vehicle charging stations, says there are 90 facilities in Little Rock and 13 in Hot Springs.

Little Rock residents say they are thrilled that they once again will have a neighborhood gathering spot to meet and that will promote the area.

"Residents in Capitol View and Stifft Station like to talk about the wonderful, eclectic neighborhood they have," said Kathy Webb, who represents the area on the Little Rock Board of Directors. "They like to call themselves a front-porch neighborhood."

The Meteor coffee shop at Kavanaugh and Markham, though technically on the edge of Capitol View/Stifft Station, was a central gathering point for the area until it closed a year ago. Franklin's development is a nice replacement, Webb said.

"Folks I've talked to are excited about this as potentially a gathering area for the neighborhood," Webb said. "And it fits in with the neighborhood's sustainability mindset."

The developments, called Franklin's Charging, will both open this summer, according to Franklin, who said the Little Rock facility should be ready around the Fourth of July with its vehicle-charging areas and hydroponic garden system that grows herbs and vegetables for sale to the public and commercially.

"The charging stations and the garden will be the first things we put into service," Franklin added. "Then we'll look at our options to expand."

Food trucks could follow soon thereafter. "We'll start with a weekly rotation and go from there," he added. "We'll see what works best for the area and what the neighbors want to see."