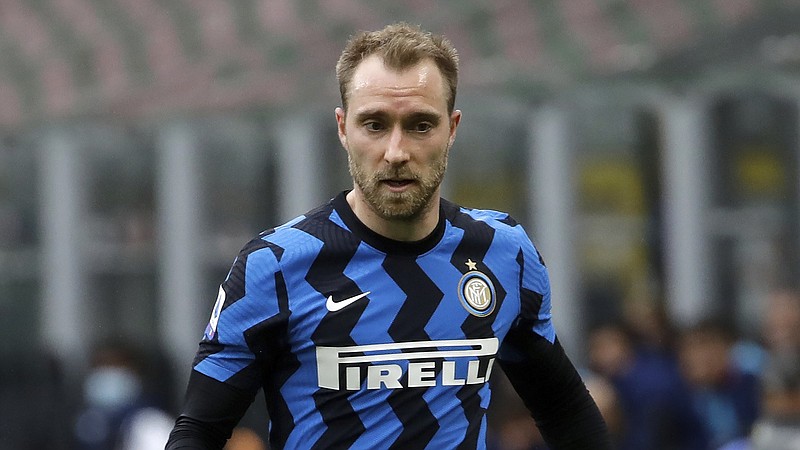 Christian Eriksen was discharged from the hospital on Friday in Copenhagen and immediately went to visit his Denmark teammates nearly a week after suffering cardiac arrest during a European Championship match. The Danish soccer federation wrote on Twitter that Eriksen was released from the Rigshospitalet in central Copenhagen after a successful operation. The federation previously said Eriksen would be fitted with an ICD, an implantable device that can function as both a pacemaker and defibrillator. "The operation went well, and I am doing well under the circumstances," Eriksen was quoted as saying in the tweet. The 29-year-old Eriksen has been in the hospital since collapsing on the field during his team's opening Euro 2020 match against Finland on Saturday. His heart stopped and he had to be resuscitated with a defibrillator. The Danish federation said Eriksen went to see the team Friday at its training base in Helsingor, outside Copenhagen, and would then go home to spend time with his family.

Harry Kane, the Premier League's leading scorer from England, never came close to scoring in the 0-0 draw against Scotland on Friday at the European Championship in London. Both teams had chances to score on a rainy night in London. England defender John Stones hit the post with a header in the 11th minute, and Scotland forward Lyndon Dykes had a shot cleared off the line by Reece James in the 63rd. ... In other matches Friday, Emil Forsberg converted a 77th-minute penalty to give Sweden a 1-0 victory over Slovakia in St. Petersburg, Russia. Substitute Robin Quaison was brought down by Slovakia goalkeeper Martin Dubravka as he ran in on goal from Alexander Isak's deft flick. Dubravka dived the correct way on Forsberg's penalty but couldn't keep it out. ... Czech Republic forward Patrik Schick scored from the penalty spot for his tournament-leading third goal in a 1-1 draw against Croatia in Glasgow, Scotland.

Leona Maguire shot an 8-under 64 on Friday to take a three-stroke lead in the Meijer LPGA Classic in Grand Rapids, Mich., the second consecutive week the Irish rookie has topped a leaderboard. The 26-year-old former Duke player is trying to become the first Irish winner in LPGA Tour history. Last week in California, she tied for ninth in the LPGA Mediheal Championship after leading after the first round. Maguire had a 15-under 129 total at Blythefield Country Club. Su Oh of Australia was second after a bogey-free 65. Linda Duncan was 11 under after a 65. Nelly Korda shot a 66 to get to 10 under, matching Anna Nordqvist (67), Mina Harigae (66), Brittany Altomare (66) and Lizette Salas (66). Gaby Lopez (Arkansas Razorbacks) was at 6 under after shooting a 70. Stacy Lewis (Razorbacks) shot a second-round 69 and is 4 under. Alana Uriell (Razorbacks) and Maria Fassi (Razorbacks) both missed the cut. Uriell shot a 73 on Friday to finish the second round at 2 over. Fassi had a 75 and was 6 over.

Harry Hall shot a second-round 63 and is 13-under 127 at the Korn Ferry Tour's Wichita Open at the Crestview Country Club in Wichita, Kan. Taylor Moore (Razorbacks) who had a 7-under 63 on Thursday to share the first-round lead with Kevin Lucas, fell into a tie for fifth place at 9-under 131 after shooting a 68. He is tied with former Razorback Nicolas Echavarria, who had a second-round 61. Matt Atkins (Razorbacks) is tied for 20th at 7-under 133 after shooting a 66 on Friday, making the cut. Also making the cut was Tag Ridings (Razorbacks), who had a second-round 69 and is 3-under 137 for the tournament.

Shelby Houlihan's quest to overturn her doping suspension in time to run at this year's Olympic trials is over. Houlihan's request for an emergency injunction from Switzerland's highest court was turned down Friday because the court didn't have the original decision to reference in order to make its own judgment. The Switzerland-based Court of Arbitration for Sport announced earlier this week it had banned Houlihan for four years after international testers found traces of the performance enhancer nandrolone in her system. Houlihan, who finished fourth at world championships last year in the 1,500 and holds the American record at both 1,500 and 5,000 meters, says the positive test came because she ate a pork burrito hours before the test. There are many examples in recent years of tainted meat causing positives. Houlihan had been entered in Friday's preliminaries for both distances at the Olympic Trials in Eugene, Ore., but her name was removed before the races started.

Ryan Crouser broke a 31-year-old world record in the shot put at the U.S. Olympic Trials on Friday at Hayward Field in Eugene, Ore., with a heave of 76 feet, 8 1/4 inches that also qualified him for the Tokyo Games. The 28-year-old Crouser will defend his Olympic title next month. He broke the record set by American Randy Barnes, whose mark of 75 feet, 10 1/4 inches, set on May 20, 1990, was one of the oldest in the record books. When Crouser's fourth try plunked into the dirt, well beyond where any other mark had been made, the quarter-filled stadium sent out a collective gasp. About a half-minute passed while officials checked the distance. When it came up on the board, he was mobbed by his competitors over near the circle.

Josh Anderson scored his second goal of the night at 12:53 of overtime, Carey Price made 43 saves and the Montreal Canadiens beat the Vegas Golden Knights 3-2 on Friday night in Montreal to a take a 2-1 lead in the Stanley Cup semifinal series. Anderson scored after he knocked down an aerial pass at the offensive blue line. The puck fell to Paul Byron, who passed back to Anderson for his third goal of the playoffs, sending the Bell Centre into a chaotic celebration. Cole Caufield also scored to help Montreal win without interim head coach Dominique Ducharme. He tested positive for covid-19 before the game. Luke Richardson took over behind the bench and directed the Canadiens to their fourth overtime victory in these playoffs. Nicolas Roy and Alex Pietrangelo scored for Vegas, and Marc-Andre Fleury stopped 24 shots. Game 4 is Sunday night in Montreal.