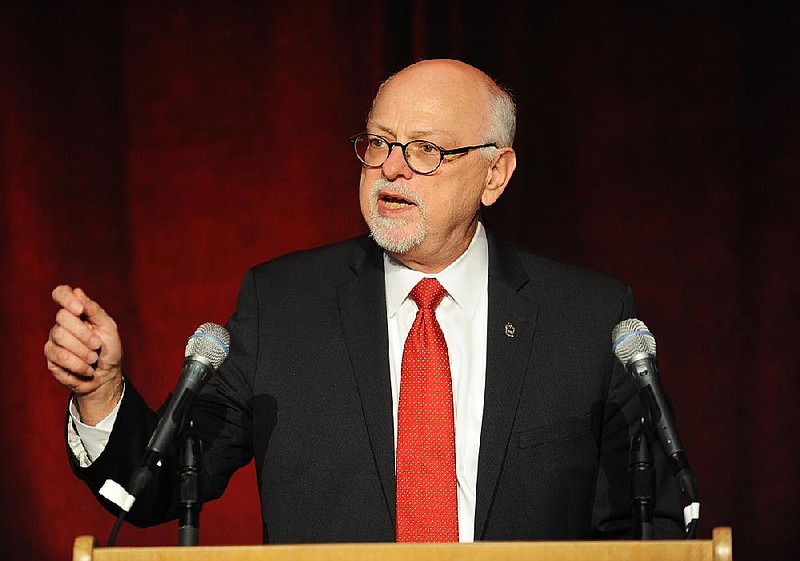 FAYETTEVILLE -- University of Arkansas Chancellor Joe Steinmetz announced Thursday evening that he is stepping down effective today from his role as leader of the state's largest university.

His announcement was made within hours of a special meeting of the University of Arkansas System board of trustees to discuss a personnel matter, though the board took no action and no individual was mentioned by name.

Steinmetz faced criticism in recent weeks over his role in decisions on the campus legacy of former U.S. Sen. J. William Fulbright given the senator's opposition to civil rights in the 1950s and '60s.

"I still strongly believe in the mission of higher education, yet given the many challenges found trying to manage a university in today's polarized society, I need to do what's best for my family and I feel ready to make way for others," Steinmetz said in a statement addressed to the faculty, staff and students.

Earlier this month, Steinmetz faced criticism from state legislators over what he called his "compromise" recommendation to move a statue of Fulbright to a different campus site. A UA committee of faculty and staff members students and alumni had recommended its removal from campus altogether after spending months studying the issue.

While lawmakers fumed at "cancel culture" and voiced opposition to change, earlier in the year on the UA campus, an anti-racism march and rally organized by students called for removal of the statue as well as for Fulbright's name to be stripped from the university's arts and sciences college.

The announcement of Steinmetz's sudden departure made no mention of who will take over.

Donald Bobbitt, president of the University of Arkansas System, said in a text message that he'll consider "several options" and take next week to decide on an interim chancellor.

Earlier Thursday afternoon, all 10 of the university's trustees held a meeting with Bobbitt for just over an hour, almost the entirety of that time in an executive session closed to the public and the press.

The meeting had just been announced Thursday.

Stephen Broughton, the board's chairman, said no action was taken on the personnel matter, which he then said was "still being investigated." He spoke during the public portion of the meeting.

Steinmetz responded by text message to a question about whether any single factor was central to his decision.

"I am just generally worn out from being in the middle of a polarized community. I have thoroughly enjoyed myself here at the U of A and know there are great things ahead," Steinmetz said.

He did not respond when asked if the decision to step down was entirely his own.

In his message to the campus, Steinmetz thanked Bobbitt and the trustees.

"We have the most supportive system and trustees and I'm grateful for their constant support of the mission of the University of Arkansas as well as my leadership," Steinmetz said.

Steinmetz arrived at UA from Ohio State University, where he was executive vice president and provost.

In September 2019, trustees approved a contract extension through 2023. He earned a base salary of $464,000 and yearly deferred compensation of $250,000, according to state records.

Broughton of Pine Bluff participated in the online board meeting Thursday. No other items were on the agenda. Bobbitt and board members Sheffield Nelson and Morril Harriman convened at the system's office in Little Rock.

Asked about Broughton's the use of the word "investigated," Nelson, of Little Rock, said, "I think that was probably a misplaced word. I don't think that is what he meant."

Nelson referred questions about the purpose of the special meeting and executive session to Bobbitt.

In a text message, Bobbitt declined to comment about the the departure of Steinmetz.

"I will perhaps offer some thoughts at a later time," Bobbitt said.

Steinmetz recommended to Bobbitt that the Fulbright name be kept on UA's arts and sciences college. Bobbitt has said he will consider the recommendation from Steinmetz, as well as a recommendation to remove former Gov. Charles Brough's name from a student dining hall, along with the trustees.

Steinmetz oversaw a period of stable enrollment and the university's response to the covid-19 pandemic.

The university maintained a steady enrollment this past fall despite the virus, unlike most other campuses in the state.

During his time as UA's leader, the university announced an unprecedented gift from the Walton Family Charitable Support Foundation for arts education.

With the gift, the university's arts department became the UA School of Art. Programs have expanded and new faculty members have been hired, with a new arts building under construction.

Last July, Steinmetz announced the establishment of a major research initiative with a $194.7 million Walton grant.

The UA Institute for Integrative and Innovative Research, or I3R, aims to bring faculty members together across disciplines. The institute will have five focus areas: data science, food systems, materials science, metabolic disease and integrative neuroscience.

"We have a lot of existing strengths in those areas, but what can make us different and unique is the way these areas interact in defining research questions," Steinmetz said last year, adding that the new institute will give students additional research opportunities and more chances to engage with entrepreneurship, regardless of major.

The gift from the Walton Family Charitable Support Foundation is the second-largest in UA's history, behind a $300 million gift from the same foundation announced in 2002.

The university in the fall announced a 68.5% six-year graduation rate based on a cohort of 4,518 students who first enrolled at UA in 2014. It was a record-high graduation rate for the school.

"I'm proud of what we've been able to accomplish together during the past 5+ years," Steinmetz said in his message to the campus Thursday, describing data on graduation rates and student retention as "unprecedented levels of student success."