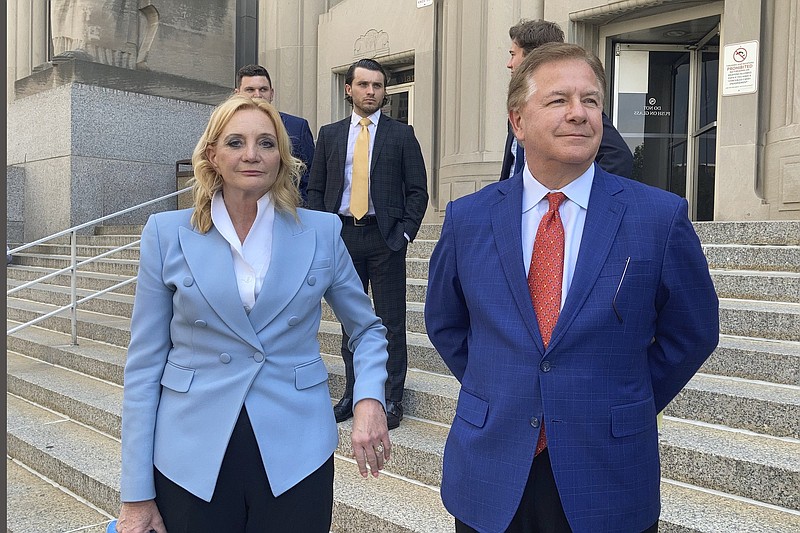 ST. LOUIS — A St. Louis couple who gained notoriety for pointing guns at social justice demonstrators pleaded guilty Thursday to misdemeanor charges, but the man left the courthouse defiantly pledging to “do it again” if faced with the same circumstances.

When several hundred people protesting the death of George Floyd at the hands of a police officer marched past their home in June 2020, the couple, both lawyers in their 60s, waved an AR-15-style rifle and a pistol at them. They claimed the protesters were trespassing and that they feared for their safety. The couple were later indicted on felony weapons charges.

Special prosecutor Richard Callahan said the misdemeanor plea was reasonable, noting the McCloskeys called the police, no shots were fired and no one was hurt.

Because the charges are misdemeanors, the McCloskeys do not face the possibility of losing their law licenses and can continue to own firearms.

Mark McCloskey, who announced in May that he was running for a U.S. Senate seat in Missouri, was unapologetic.

“I’d do it again,” he said from the courthouse steps. “Any time the mob approaches me, I’ll do what I can to put them in imminent threat of physical injury because that’s what kept them from destroying my house and my family.”

POMPANO BEACH, Fla. — A motorboat with migrants aboard crashed into a sea wall Thursday as police chased it on the Intracoastal Waterway in Pompano Beach, Fla. More than 14 people were arrested.

Some jumped into the water before local and federal authorities arrested all of them, the latest of an increasing number of migrants trying to cross the sea.

The boat crashed as a law enforcement boat sped through the water with a police helicopter circling overhead, a video from a witness shows. The crash happened about 8:45 a.m. Thursday, the Broward County sheriff’s office said.

Authorities did not identify the country of origin of those detained. One migrant told WPLG-TV that they were fleeing violence in Jamaica. They will be transferred to the custody of the Customs and Border Protection agency, officials said.

Early figures show this year has been busy for migrant crossings. As of February, at-sea interceptions already had outpaced all of 2020 for people attempting the trip just from Cuba, the most recent data shows.

GREENWOOD, Miss. — A private school in the Delta has laid off all its teachers and is searching for a buyer as its owners face federal fraud charges.

Administrators of North New Summit School sent an email to parents Wednesday telling them about the layoffs, the Greenwood Commonwealth reported.

“While we are still pursuing all possibilities for a sale or transition of the school to new ownership, these discussions are ongoing,” the school officials wrote. “We simply cannot assure you at this time that NNSS will be open in the fall.” New Summit School also has a campus in Jackson. The schools have been facing financial uncertainty after Nancy New and her son, Zachary New, were indicted on federal fraud charges in March. The indictment accused their company, New Learning Resources Inc., of fraudulently obtaining more than $2 million from the state from 2017 to 2020. Court records list Nancy New as president and Zachary New as vice president of New Learning Resources during the time covered by the indictment.

They have both pleaded innocent, and their trial is scheduled to begin Sept. 7 in Jackson.

HOLLY SPRINGS, Ga. — A police officer died after a traffic stop in which he fatally shot a man, possibly as the officer was being dragged, authorities said.

Holly Springs Police Chief Tommy Keheley said investigators believe Holly Springs officer Joe Burson, 25, shot the driver late Wednesday while he was being dragged by a vehicle, but said an inquiry is ongoing.

Georgia Bureau of Investigation spokeswoman Nelly Miles said Burson was dragged but managed to fire shots at the driver, who was identified as 29-year-old Ansy Dolce. Miles said Burson and Dolce both died despite receiving first aid. The state agency is investigating Burson’s shooting of the driver.

Officials had initially said Burson had been shot to death.

Keheley said a shift supervisor also was present for the traffic stop over speeding. He said investigators are examining video footage and other evidence.

Keheley said he met overnight with the wife of the officer, who was from nearby Ball Ground.