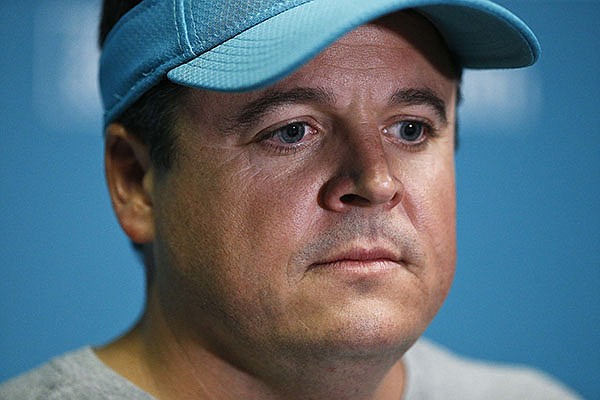 FAYETTEVILLE — New Arkansas tight ends coach Dowell Loggains agreed to a contract that begins at $300,000 per year and runs through after the 2022 season.

According to the contract, which was obtained through a Freedom of Information Act request, Loggains would be owed all of his remaining salary if fired for convenience prior to the contract's expiration on Feb. 28, 2023.

Loggains would owe a sum equal to 20% of his remaining salary if he accepts another job during that time, but that fee would be waived if the new position is as a college head coach or coordinator, or any position in the NFL.

Loggains is a former offensive coordinator for four NFL teams, most recently the New York Jets the past two seasons. He was working as an offensive analyst at Penn State when he was hired away by the Razorbacks.

Loggains lettered as a quarterback at Arkansas from 2001-04 and played in 50 games, mostly as a holder.

Loggains was hired last week as part of a staff reshuffle that began when offensive line coach Brad Davis was hired away by LSU. Davis, who grew up near the LSU campus, will be paid $810,000 in his first year with the Tigers, according to The Advocate newspaper, which is $160,000 more than he stood to receive this year at Arkansas.

Kennedy’s contract details have not changed from the two-year, $300,000-per-year agreement he signed when he was hired.

Loggains’ $300,000 salary is the same as other first-year Razorback assistants Kennedy, Jermial Ashley and Kenny Guiton. Ashley is coaching the defensive line and Guiton coaches receivers.

First-year linebackers coach Michael Scherer will be paid $175,000. Scherer, who was a quality control coach at Arkansas last season, did not have previous full-time coaching experience.

Arkansas’ full-time staff of 10 assistants stands to make $5.025 million in base pay this year. If that figure stands, it would be the first time since the 2014 season the Razorbacks’ cumulative base assistant pay fell from the year before.

Arkansas assistants were in line to make $5.225 million in base pay a year ago. Actual pay was less after department-wide salary reductions that stemmed from a budget shortfall following the outbreak of covid-19.