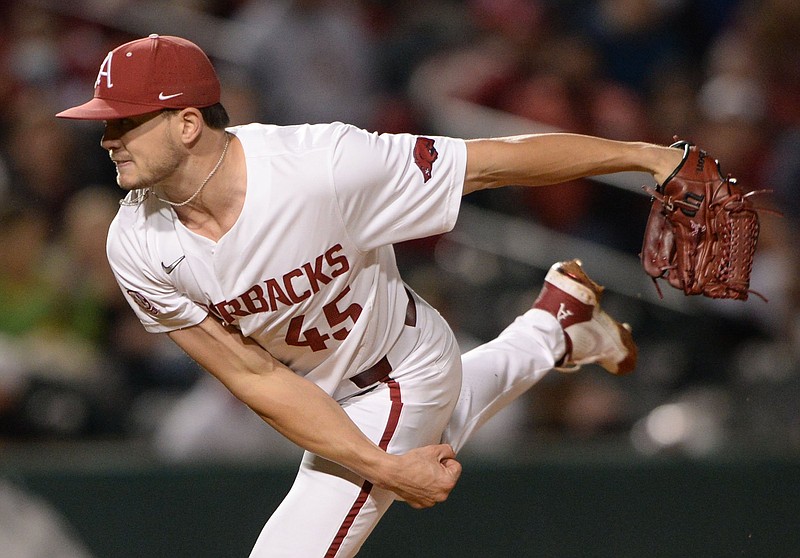 Arkansas reliever Kevin Kopps follows through with a pitch Friday, May 7, 2021, during the seventh inning of play against Georgia at Baum-Walker Stadium in Fayetteville. (NWA Democrat-Gazette/Andy Shupe)

FAYETTEVILLE -- Arkansas' baseball season is over, but the award season is ongoing for the Razorbacks' star player in 2021.

Kevin Kopps was named national pitcher of the year Thursday by the College Baseball Foundation. It is the first of three national awards that could be won by Kopps over two days.

The National College Baseball Writers Association will announce the winners of the Dick Howser Trophy, Stopper of the Year Award and Mike Martin Award today.

The Howser Trophy is one of the sport's two most prominent national player of the year awards, along with the Golden Spikes Award. Stopper of the Year is presented to college baseball's best relief pitcher, and the Martin Award is for national coach of the year.

Kopps is one of five finalists for the Howser Trophy and one of 10 finalists for Stopper of the Year. Arkansas Coach Dave Van Horn is a candidate for the Martin Award after leading the Razorbacks to a 50-13 record.

"He's very humble and did everything he could for this team," Van Horn said of Kopps after the Razorbacks' season-ending 3-2 loss to North Carolina State on Sunday, "and I think you're going to see some pretty good rewards coming his way in the next couple of weeks."

Opposing hitters had a .162 average against Kopps. He struck out 131 and walked 18 in 89 2/3 innings. During one stretch, Kopps recorded 28 consecutive scoreless innings, one shy of the program record.

Kopps was a reliever in 32 of his 33 appearances. His only start came during the season-ending loss to NC State, when he allowed a solo home run to lead off the ninth inning. He allowed three runs in 23 1/3 innings during the NCAA Tournament, all of which came in his only start.

Kopps is the first reliever to win the College Baseball Foundation's pitcher of the year award, which was established in 2009. Past winners of the award include Stephen Strasburg of San Diego State, Trevor Bauer of UCLA and Aaron Nola of LSU.

"Kevin is the embodiment of the National Pitcher of the Year," said Chris Snead, award co-chairman. "He was dominant on the mound all season and the leader on one of college baseball's best teams."

Kopps has also been named national player of the year by Collegiate Baseball Newspaper and was voted SEC pitcher of the year by league coaches. The NCBWA and Baseball America announced Kopps as first-team All-America this week, and he is a semifinalist for the Golden Spikes that will be presented by USA Baseball in July.