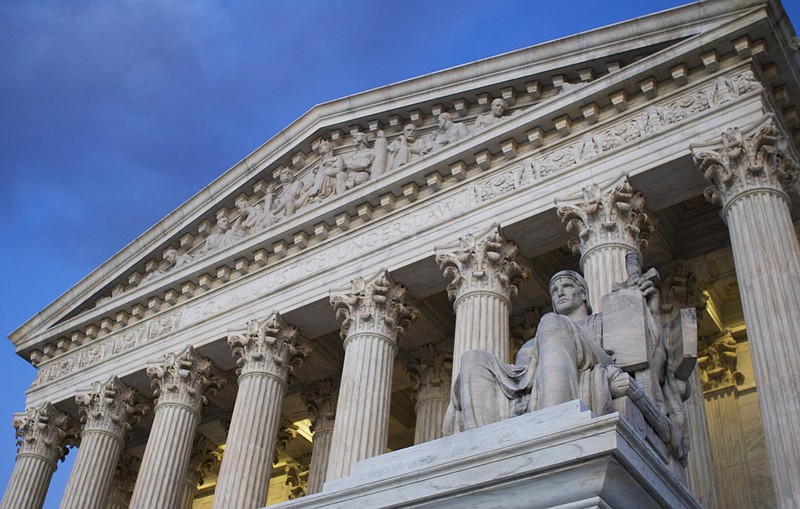 The Supreme Court building is seen at sunset in Washington in this Feb. 13, 2016, file photo. (AP/Jon Elswick)

WASHINGTON -- The Supreme Court on Thursday dismissed the latest challenge to the Patient Protection and Affordable Care Act, saying Republican-led states do not have the legal standing to upend the law.

The justices, by a 7-2 vote, left the entire Affordable Care Act intact in ruling that Texas, other GOP-led states and two individuals had not suffered the sort of direct injury that gave them standing to sue.

The Biden administration says 31 million people have health insurance because of the law, which also survived two earlier challenges in the Supreme Court, in 2012 and 2015.

Alito wrote, "Today's decision is the third installment in our epic Affordable Care Act trilogy, and it follows the same pattern as installments one and two. In all three episodes, with the Affordable Care Act facing a serious threat, the Court has pulled off an improbable rescue." Alito was a dissenter in the two earlier cases, as well.

[Video not showing up above? Click here to watch » https://www.youtube.com/watch?v=U_yOrfbxt2g]

He said the states had standing to sue.

"The ACA imposes many burdensome obligations on States in their capacity as employers, and the 18 States in question collectively have more than a million employees," he wrote. "Even $1 in harm is enough to support standing. Yet no State has standing?"

The key issue in this case, California v. Texas, No. 19-840, was whether a 2017 decision by Congress to remove the penalty for not buying health insurance -- the so-called individual mandate -- meant that the law was unconstitutional and should be wiped from the books.

That would end provisions such as keeping young adults on their parents' insurance policies, ensuring coverage for those with preexisting medical conditions, a range of no-cost preventive services, expansion of the Medicaid program that insures lower-income people and access to health insurance markers offering subsidized plans.

"This ruling reaffirms what we have long known to be true: the Affordable Care Act is here to stay," Obama tweeted.

"Today's U.S. Supreme Court decision is a major victory for all Americans benefiting from this groundbreaking and life-changing law," Biden said in a statement. "It is a victory for more than 130 million Americans with preexisting conditions and millions more who were in immediate danger of losing their health care in the midst of a once-in-a-century pandemic."

Biden, in contrast to Trump, has said he plans to build on the program to offer more Americans health care coverage.

The challenge from GOP-led states arrived at the Supreme Court at an inopportune time -- endangering the health care coverage of more than 20 million Americans during the country's gravest health crisis in a century.

The biggest loss of coverage would have been among low-income adults who became eligible for Medicaid under the law after it was expanded. But millions of Americans would also have lost private insurance, including young adults whom the law allowed to stay on their parents' plans until they turned 26 and families whose incomes were modest enough to qualify for subsidies that help pay their monthly premiums.

Even congressional Republicans who have targeted the law in the past distanced themselves from the suit filed by the Republican state attorneys general and joined by the previous administration.

The case posed three questions: Do the challengers have legal standing to lodge the challenge? Did changes made by Congress in 2017 render unconstitutional the law's requirement for individuals to buy insurance? And if so, can the rest of the law be separated out, or must it fall in its entirety?

Breyer said that answering the first question negated the necessity of deciding the others.

"With the penalty zeroed out, the IRS can no longer seek a penalty from those who fail to comply," Breyer wrote. So the individual plaintiffs face no government retribution for failing to purchase health insurance, he wrote.

And the states fare no better, he wrote. They "have not demonstrated that an unenforceable mandate will cause their residents to enroll in valuable benefits programs that they would otherwise forgo."

Because it dismissed the case for the plaintiff's lack of legal standing -- the ability to sue -- the court didn't actually rule on whether the individual mandate is unconstitutional now that there is no penalty for forgoing insurance.

Texas Attorney General Ken Paxton pledged to continue the fight against the Affordable Care Act, which he called a "massive government takeover of health care."

Republicans have pressed their argument to invalidate the whole law even though congressional efforts to rip out the entire law "root and branch," in Senate Minority Leader Mitch McConnell's words, have failed. The closest they came was in July 2017 when Arizona Sen. John McCain, who died the next year, delivered a dramatic thumbs-down vote to a repeal effort by fellow Republicans.

The new challenge was largely successful in the lower courts. A federal judge in Texas ruled that the entire law was invalid, but he postponed the effects of his ruling until the case could be appealed. In 2019, the 5th U.S. Circuit Court of Appeals in New Orleans agreed that the mandate was unconstitutional but declined to rule on the fate of the remainder of the health law, asking the lower court to reconsider the question in more detail.

Chief Justice John Roberts said during arguments in November that it seemed the law's foes were asking the court to do work best left to the political branches of government.

Arkansas Attorney General Leslie Rutledge, part of the 18-state coalition behind the lawsuit, said in a statement Thursday that the Supreme Court's ruling did not address the merits of the coalition's argument that the Affordable Care Act is constitutional.

"Arkansans deserve better, and I will continue to urge Congress to establish a comprehensive healthcare law that will allow states to be flexible while ensuring coverage for pre-existing conditions," Rutledge said in the statement.

In a statement Thursday, Gov. Asa Hutchinson also expressed disappointment that the justices dismissed the case on procedural grounds. He said the question of the "far-reaching" health care law's constitutionality was "important and a legitimate issue to be resolved by the Supreme Court."

Hutchinson, however, acknowledged that the decision means it is unlikely the court will take up the issue again. He stressed the importance of ARHOME, the state's proposed Medicaid expansion initiative, as a solution to providing health care for Arkansans.

The plan would encourage insurance carriers to "play a role in motivating Arkansans to get healthy through changes in lifestyle such as quitting smoking, exercising more, getting preventative wellness exams, and prenatal care," as well as covering the costs of medical care, Hutchinson said in the statement.

Information for this article was contributed by Robert Barnes and Amy Goldstein of The Washington Post; by Mark Sherman of The Associated Press; by Adam Liptak of The New York Times; and by staff members of the Arkansas Democrat-Gazette.