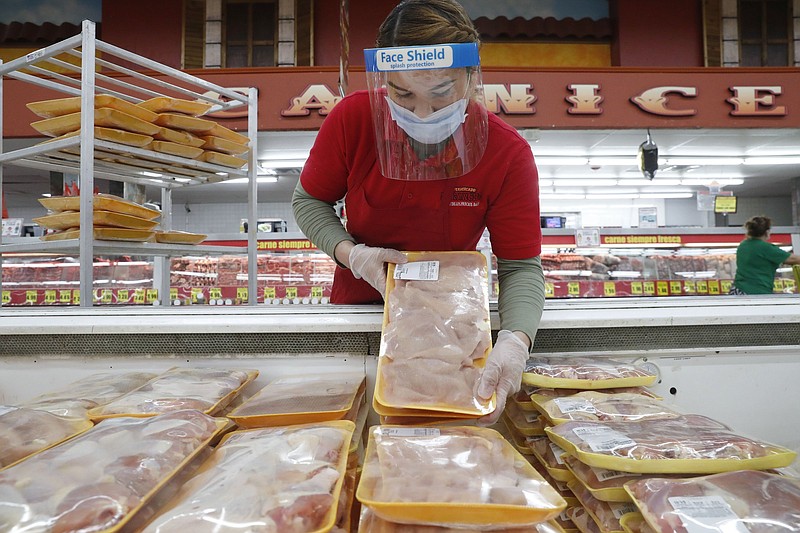 A worker restocks chicken at a grocery store in Dallas last year. Americans are paying more this year for a variety of items, including meat, gasoline and even homes. (AP)

Chicken prices are soaring as demand returns to levels not seen since before the covid-19 pandemic.

Wholesale prices for chicken breasts, tenders and wings this month are about double what they were last year, according to data from Urner Barry. The same goes for corn, ethanol and soybeans.

John Anderson, professor and head of the Agricultural Economics and Agribusiness Department at the University of Arkansas, Fayetteville, saw this as one of the "aftershocks" of covid-19.

As global markets recover and consumers get back to spending, the demand side of the equation is growing rapidly, Anderson said. He ruled out the possibility of a supply shortage fueling the recent run-up, but pointed to signs of inflation across industries.

U.S. consumer prices have risen every month since January, resulting in a 5% increase in the consumer price index over the past year. This is the largest 12-month increase since there was a 5.4% run before the housing market crashed in 2008.

"We're not seeing crazy levels yet," Anderson said. "More or less across the board is upward pressure as the market heats up a little after covid."

While chicken prices are at record highs, prices for beef are still below the peaks during the coronavirus pandemic when outbreaks led some U.S. processors to close plants. Pork prices are higher than last year, but below records set in 2014 during a swine-disease outbreak.

The surge comes after several fast food chains added fried-chicken sandwiches to their menus in order to compete with the success of Popeye's sandwich in 2019. Sales have also grown as consumers prepare more meals at home during the pandemic. Meanwhile, poultry producers have struggled to keep up with growing demand, with labor shortages at meat plants and severe winter storms that killed thousands of birds, tightening chicken supplies.

One glitch in the supply chain came from a type of rooster that Tyson Foods used for breeding, which resulted in lower hatching rates that led to fewer chickens. Chief Executive Donnie King said in a call with analysts that "we made a bad decision" and expect rates to improve over time as Tyson switches to a more traditional breed.

Poultry slaughter and production dropped nearly 30% this month compared with last year, according to U.S. Department of Agriculture data. The amount of chicken in cold storage was less than 750 million pounds in April, down from 950 million pounds a year ago. USDA revised its 2021 meat production forecast earlier this month on higher meat chicken production.

Anderson said he wasn't that surprised by the price increases, and wondered how long the poultry gains will last.

"Can we make a soft landing?," he said. "I think what we will see is, how does the supply side respond? How quickly can we get production ramped up across the economy back to a level that matches the demand we are seeing now?"

As wholesale prices climb, retail prices are expected to follow. Anderson said that retailers, who buy product weeks or months in advance, will eat some of the gains but shoppers can expect to see changes at the meat case in the coming weeks. Hopefully, he said, the trend won't last too long.