TRACK AND FIELD: Hard work, perseverance pays off for Milholen 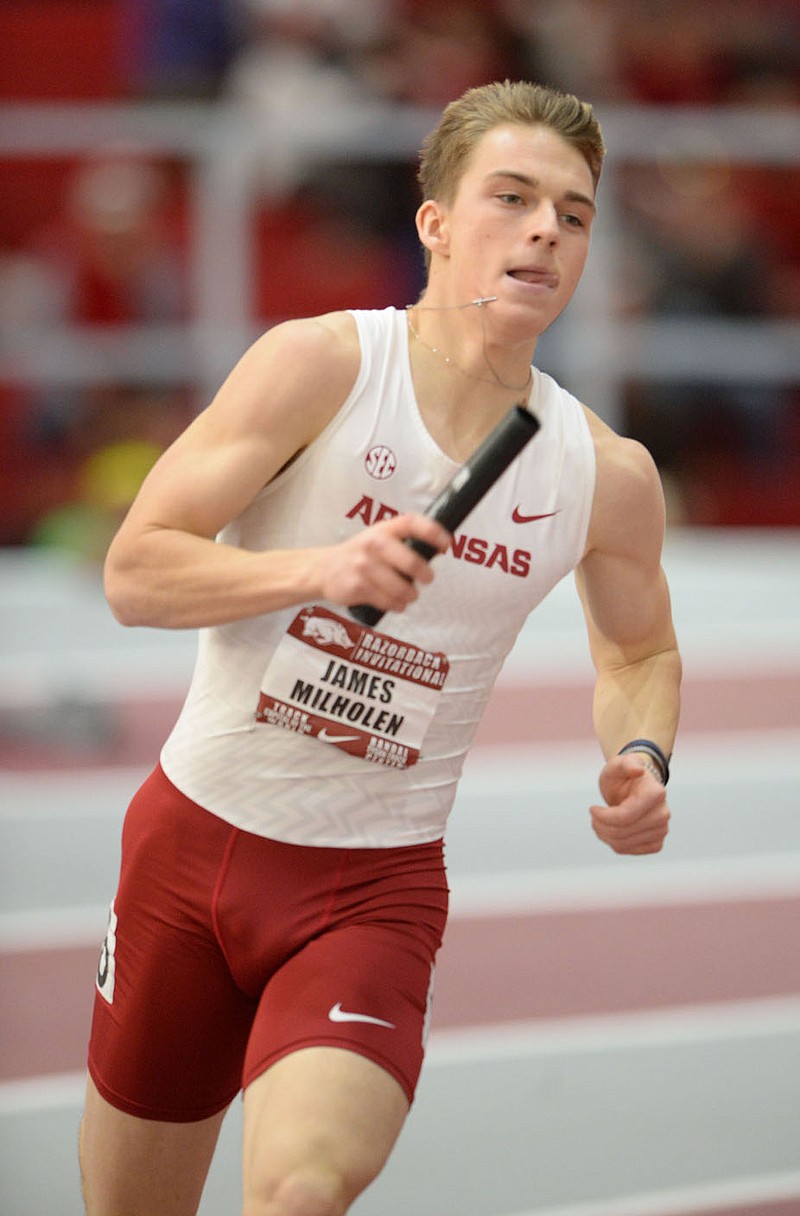 Arkansas' James Milholen competes Saturday, Feb. 1, 2020, in the 400-meter relay during the Razorback Invitational in the Randal Tyson Track Center in Fayetteville. Milholen, a former Bentonville West track standout, did not make the relay team as a sophomore at Bentonville High, but his determination led to being a key member of this year's quarter-mile relay team for the University of Arkansas. (NWA Democrat-Gazette/Andy Shupe)

FAYETTEVILLE -- When Dave Anderson was tasked with making cuts for Bentonville's 1,600-meter relay team at the 2016 state championship track and field meet, the lineup did not include sophomore James Milholen.

"He's in the top 10 of Razorbacks all-time in the 400 meter[s]," Anderson said of Milhonen's ninth-best school mark. "That says a lot for a walk-on kid from Centerton, Arkansas."

Milholen's path to competing for the Razorbacks started as a multi-sport ninth-grader who was burned out from playing baseball. He decided joining the track team would be a good way to try something new, all while getting faster and in better shape for football season.

As a freshman, his 400 time hovered around the 55-second mark, something he was determined to improve. During his sophomore season, he shaved off nearly five seconds off.

Despite rising the team ladder, Milholen was still the odd man making the state championship team.

"We had a really deep crew of 400-meter kids," Anderson said. "James got to run on the relay team quite regularly, but when it came down to the championship four, we had to make the decision of what four we needed to put in to try and win the state title. He was our number five.

"It was a really stout group, so to his credit, he was one of the top eight quarter-milers in the state of Arkansas. It just so happened that most of them were at Bentonville High School."

Instead of residing in a state of disappointment, Milholen used the situation to refocus and strengthen motivation. For his junior season, both he and Anderson made the switch to newly formed Bentonville West.

"I just stayed with it and kept working hard," Milholen said. "I kept doing the workouts that I was given."

His progress led to finally hitting the sub-50 mark, something he'd been aiming.

"In the world of the 400 meters, for a high school kid when you break 50 seconds the first time, that's a huge benchmark," Anderson said. "He didn't do that until he was a junior when he ran 49.99, so he just barely skated under that year. He was either third or fourth at the state meet."

His senior season he continued to taste success. Prior to eclipsing the under-48 second feat, Pittsburg State offered him a scholarship.

In the 2018 state championship meet, not only did he win the 400 meters, but he also defeated the defending champions from 2016 and 2017. Milholen didn't limit making strides to performance between the lanes, but he was also a leader for the team.

"As a high school track coach, I've never been one to believe in having team meetings, electing captains, or putting that label on someone," Anderson said. "I believe people lead in different ways. Some are just more vocal than others.

"James has always been one to lead by example. If we put on the workout sheet that we were going to do 'this' for warmup, and 'that' for the buildups, and 'this' will be the actual workout and times we're going to hit, you could give him a watch, walk away from the group, and I guarantee the result would be that they'd do everything I asked. He's just got tremendous character, and you never have to worry about him compromising. He's a guy of integrity."

Following graduation, Milholen remained committed to his pledge to run for Pittsburg State. Upon beginning classes and becoming acclimated to the campus, he didn't feel the university was a right fit for him.

"I went there for like three weeks and didn't really like it, so I left," Milholen said. "I went to NWACC [Northwest Arkansas Community College] for the rest of the fall semester and was still training with my club coach."

It was then that he began to pursue a new goal: To walk on for the Razorbacks.

"For him to leave a scholarship, come back to Arkansas, attempt to walk on, and then have to climb the ladder was a huge leap of faith," Anderson said. "He made a commitment to go to Pittsburg State when they recruited him early on, prior to him running 48 seconds, but his heartstrings were always to run on John McDonnell Field for the Arkansas Razorbacks."

Climb the ladder he did.

After a freshman campaign that included finishing 23rd in the 400 meters at the 2019 SEC Outdoor Championships, the following outdoor season was canceled due to covid-19. However, prior to the pandemic, he'd risen to first leg of the indoor 1,600 relay team and finished 11th in the 400 with a 47.54 time.

Despite struggles posed by training during a pandemic, he remained committed to elevating his performance.

"You've got to have determination," Milholen said. "If you want it bad enough, you'll be able to do it. You must take care of your business both in practice and outside of it. In high school, it's important to listen to the coaches and whatever they set for workouts. They aren't too terribly hard usually, so your body is able to recover fairly easily at that age. Once you get to college, you still have to listen to your coaches, but it's also critical you listen to your body.

"You have to take care of your body. It doesn't just do it by itself. Putting 100 percent effort in no matter what is when you see results."

For Milholen, the 2021 SEC Outdoor Championships came with results that are ingrained into Razorback history books. Not only did he set a personal best 45.98 400 time, good for UA's ninth best all-time, but his team also won the league's triple crown.

"As Coach [Doug] Case, Coach [Chris] Bucknam, and the Razorback staff have found out, the brighter the light, the brighter he shines," Anderson said. "He likes it. He loves to perform under pressure. It doesn't bother him if a championship is on the line. In fact, sometimes I think he would rather operate under those conditions. He's one of those guys who rise to the occasion time and time again.

"It's taken him from number five man in the relay pool who couldn't be on the state championship 4x400 team in high school, to now representing one of the most storied programs in the history of the NCAA."

With the completion of his 2021 season, Milholen has his eyes on another lifelong aspiration.

"If the opportunity presents itself, Olympic trials are a goal of mine," he said. "I don't know about this year, but I have a chance if I can run a little bit faster. Beyond that, I have two years of eligibility remaining, so there's some time to figure out what I want to accomplish both during those years and then in life after college."

Anderson believes that commitment to trusting the process has paid dividends for Milholen, something younger athletes can model.

"He is a constant worker. I think if you could have a 17-year-old James speak to himself, he would say 'stick to the process,' " Anderson said. "It has been a huge process. One of his strengths his whole career has been his ability to do whatever is asked and stay true to the process. That is just a great message to any up-and-coming quarter-milers who aspire to run beyond high school.

"The fact that he's wearing a Razorback uniform and Coach Case has enough faith in him to put him as the anchor of the 4x400 team, representing one of the most storied programs in the U.S., it's quite an honor for a walk-on kid from Centerton."