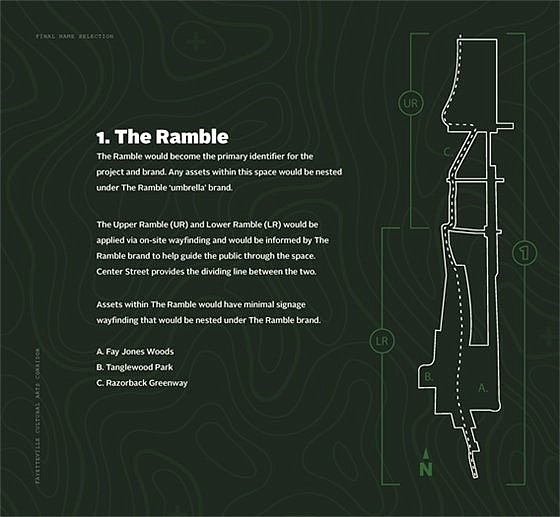 A map shows the proposed naming and layout for Fayetteville's cultural arts corridor project stretching along West Avenue from Dickson to Prairie streets. The entire corridor will be known as The Ramble. (Courtesy/City of Fayetteville)

FAYETTEVILLE -- The cultural arts corridor downtown will be known as The Ramble.

The city announced the name in a news release Wednesday. Voters in April 2019 approved a $31.6 million bond issue to build an arts corridor downtown, stretching along West Avenue from Dickson to Prairie streets.

The project involves converting the parking lot west of the Walton Arts Center into an outdoor civic space, turning the Fay Jones woods west of West Avenue between Center and South streets into a nature attraction and making improvements to the Razorback Greenway, West Avenue and intersecting streets.

The city and the its tourism bureau, Experience Fayetteville, launched a campaign to name the arts corridor in February. The list of potential names included The Ramble, Tanglewood Corridor, The Revery, The Tangle and Tanglewood Artery.

The selections were taken from more than 250 ideas submitted by the public and narrowed by a panel of about 50 residents who signed up to help provide feedback, according to the news release.

About 660 people provided input on the short list of names. The Ramble and Tanglewood came up in different variations among multiple participants, the release states. The city decided to use both names for different aspects of the corridor.

The Ramble name is a nod to late Arkansas musician Levon Helm, according to the release. Helm hosted Midnight Ramble sessions in a barn in Woodstock, N.Y., until he died in 2012.

The Fay Jones woods will keep its name. A section of the woods at Gregg Avenue to the west along Tanglewood Creek will be known as Tanglewood Park, according to the release.

The city will still use the cultural arts corridor term when referring to the overall bond project, the release states. The new names and signs will be applied as individual parts of the project finish and are opened to the public.

Work for Phase I of the project involving the Fay Jones woods and Razorback Greenway has already started.

Construction of a new parking deck northwest of Dickson Street and West Avenue is scheduled to happen this summer. A 330-space deck will replace the 290 spaces lost once the parking lot west of the Walton Arts Center becomes the corridor's civic space. Work on the civic space won't begin until the deck is completed, which should take until August 2022. The civic plaza is scheduled to be completed in September 2023.