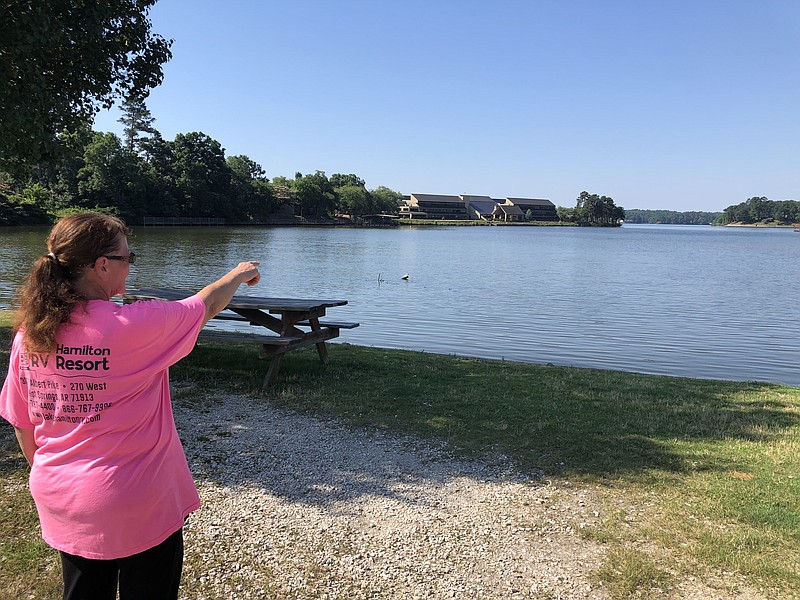 Twyla Arquette points to where an alligator was seen at the Lake Hamilton Resort RV park in the water. Photo by Krishnan Collins of The Sentinel-Record

The Garland County Sheriff's Department contacted the Arkansas Game and Fish Commission on Tuesday after residents reported seeing an alligator in the area of Lake Hamilton RV Resort off Highway 270 west.

"Capt. (Joel) Ware went out there and laid eyes on it. He confirmed it was an alligator, so Game and Fish (was) called, but it was gone by the time they got there," sheriff's Deputy Courtney Kizer, the department's public information officer, said Wednesday morning.

Kizer said she had not followed up with Ware yet Wednesday morning and did not know the size of the alligator.

Residents of Lake Hamilton RV Resort said Wednesday morning that they spotted the alligator on the shore and in the water Tuesday evening at the RV park.

Two residents were walking by the water when one mentioned to her husband she saw a piece of wood on the shore. He then told her that it was instead an alligator and the alligator then swam out into the water as she tried to snap a picture.

Twyla Arquette, part of the management staff, said people have spotted alligators at the park for years before she even worked there.

"I've been going on three years here, seen them way before then," Arquette said. "We told everybody, don't let nobody get in that water. Don't let no kids, dogs in the water."

Arquette said she's noticed ducks disappearing recently and at one point the area had 30-40 baby ducks, but now there are none. Arquette noticed even the big ducks have disappeared in recent times.

Arquette said they called the sheriff and Game and Fish Commission, but the RV park was told nothing could be done.

A timeline has not yet been given to Arquette on when the alligator problem might be taken care of, so she's warned the residents in the park and said something needs to be done.