BASEBALL PLAYER OF THE YEAR: Taking care of business 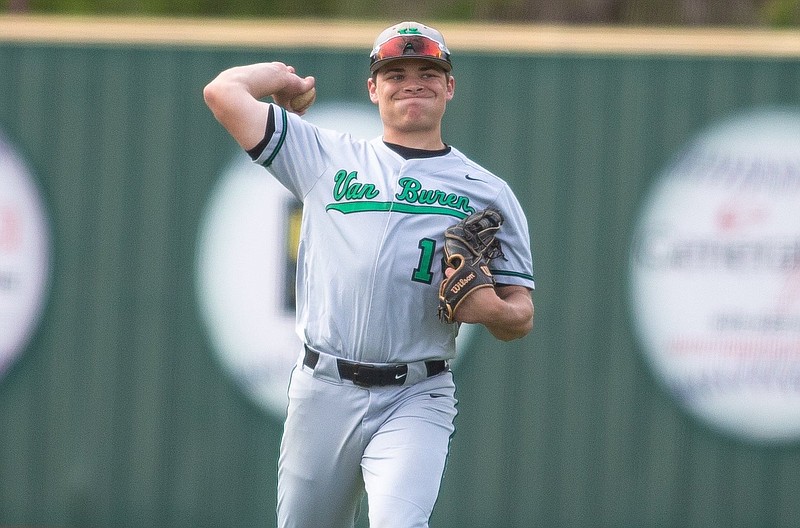 Van Buren Coach Luke Weatherford called his ace pitcher Connor Johnson one of the most competitive players on his team this past season, but it may be far-fetched for anyone on the outside looking in to notice how deep that ruthless runs.

Baseball fans have grown accustomed to seeing passionate demonstrations or reactions from players at some point throughout the course of a game, especially in a sport with ebbs and flows of emotion. But Johnson is different.

Don't expect to see any chest-pounding, air punches or tamed trash talk coming from his direction. According to Weatherford, Johnson is all about business.

"He's very even-keeled, which is assuring as a coach," Weatherford said. "The guy on the mound is the one that everybody is watching and looking to. But nothing is going to distract him or throw him off of what he's trying to accomplish.

"He's not a rah-rah guy. He's not one of the guys that's going to get overly excited. He just goes out there and gets the job done."

There was no task that Johnson couldn't complete during a season in which he was nearly untouchable.

The 5-11, 180-pounder was a perfect 14-0 on the mound and finished with a mind boggling 12-to-1 strikeout- to-walk ratio in leading the Pointers to their first state championship. That type of domination from a high school hurler was rare within the borders of the state this season, but Johnson made it look easy at times.

"I thought I had a good season last year before covid-19 hit and ruined it for everybody," said Johnson, the Arkansas Democrat-Gazette's All-Arkansas Preps Baseball Player of the Year. "I still needed to improve though, especially with my breaking stuff because it needed to get better. I felt like I did that, but I needed to get better at my hitting and defense, too. So there was a lot of things that I felt I needed to work on going into the season.

"But my pitching has always been ahead of my hitting and defense."

Johnson's right arm stayed ahead of every team he faced. He recorded at least six strikeouts in every one of his starts, had nine games where he struck out at least eight batters and held five teams scoreless. The only team to register more than four hits off him was Greenbrier, which had six in a 7-4 loss.

One of the most impressive attributes Weatherford believes Johnson encompassed was his ability to up his level of play in marquee games.

"Any time he was on the mound, our team 100% thought we were going to win," Weatherford said. "It didn't matter who we were playing. We played [Class 6A state champion] Rogers this year, and he shut those guys down. We played [Class 6A state runner-up] Springdale Har-Ber, and he shut them down with no runs through six innings. They guys know when he's on the mound that we're gonna win, they really do believe that.

"They know we've got to play behind him, score a couple of runs, and that's it. He'll take care of the rest."

Johnson was especially good during the state tournament when he allowed a total of four hits and struck out 22 in victories over Lake Hamilton in the first round and Greenwood in the semifinals before he allowed four hits and had seven strikeouts in a dominating 12-1 rout of Jonesboro in the Class 5A state final.

"We knew we had the talent to win state," Johnson said. "That was the main goal. A conference championship was nice and all, but we wanted the whole cake. At the beginning of the season, I thought we believed we were, too, good honestly.

"We won four or five straight against some 6A teams, but we got humbled a little bit in some other non-conference games. So we had to re-focus, and when we got into conference, I really thought we had a chance to be pretty good."

For the 821/3 innings he pitched, Johnson was very good. And Weatherford thinks that will carry over to the University of Central Arkansas once the standout hurler arrives in the fall.

"I think he's going to do great down there," he said. "Some people see that his velocity is 86, 88. There's other guys that throw harder, but just his pitchability, his ability to locate his fast ball. ... He's one of those high spin-rate guys.

"His fast ball just stays on a plane, it comes in and people just miss it."

Johnson made sure he didn't miss out on a chance to finally show some emotion in his final game. When he struck out Jonesboro's Josh Hyneman for the last out of the championship, the right hander immediately ran toward catcher Tanner Callahan and celebrated wildly. That moment, for Johnson, may have been a rare one, but it was well-deserved.

"I love to compete, and I hate to lose," Johnson said. "I wanted to win every game I pitched in. Whenever I'm on the mound, that's all I want to do. Go out, do my job and win."

Johnson at a glance

NOTEWORTHY Signed to play at the University of Central Arkansas. … Had 121 strikeouts and just 10 walks in 82 1/3 innings while going 14-0 on the season. … Was named the Most Valuable Player of the Class 5A state tournament this past season.