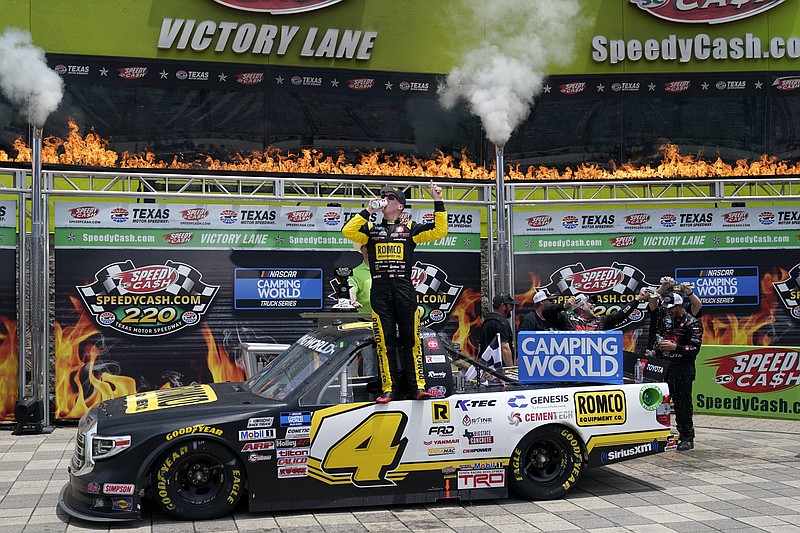 Chesson Hadley moved a step closer to his first PGA Tour victory in seven years, opening a four-stroke lead over Harris English and six over Dustin Johnson in the rain-delayed Palmetto Championship at Congaree in Ridgeland, S.C. Hadley, English, Johnson and Lee Tain were all on the 18th hole when the horn sounded to stop play Saturday because of lightning. Rain followed about 10 minutes later and officials waited more than two hours for things to clear before telling the players they had to return to finish today. Hadley, in the final group, had just driven into the fairway. English and Tain were preparing to putt. Johnson had yet to hit. Hadley stands 19 holes away from closing out a surprising week with his second career tour victory after entering this tournament off five consecutive missed cuts. Hadley surged late with four birdies on a five-hole stretch of the back nine to reach 14 under. English was 10 under. Johnson, who was tied for the lead early in the round, dropped into a third-place tie with South Africa's Garrick Higgo at 8 under. Higgo finished with a 68. Austin Cook (Jonesboro, Arkansas Razorbacks) is tied for 20th at 4-under 209.

Lee takes over at LPGA

Min Lee made a 15-foot birdie putt on the par-5 18th for a 4-under 68 and two-stroke lead Saturday in the LPGA MEDIHEAL Championship in Daly City, Calif. Lee also birdied the par-5 15th and par-3 17th to pull away from former Stanford player Lauren Kim and Finland's Matilda Castren. The 26-year-old Lee, from Taiwan, is trying to win for the first time on the LPGA Tour. She had a 9-under 207 total at Lake Merced in the tour's second consecutive event on the San Francisco Peninsula. Lee failed to qualify for the U.S. Women's Open last week at nearby Olympic Club. Castren shot a 69, and Kim had a 71.

Miguel Angel Jimenez shot a 3-under 69 on Saturday to take a one-stroke lead over Fred Couples into the final round of the PGA Tour Champions' American Insurance Championship. Jimenez, also the first-round leader after a 65, had a 10-under 134 at University Ridge. The 57-year-old Spaniard has 10 victories on the 50-and-over tour after winning 21 times on the European Tour. The 61-year-old Couples followed an opening 68 with a 67. He won the 2017 tournament for the last of his 13 senior titles.

Lower in front at Korn Ferry

Justin Lower increased his lead in the Korn Ferry Tour's Rex Hospital Open to three strokes after a 7-under 64 at the Thornblade Golf Course in Greer, S.C. Lower, at 191, is in front of second-place Mito Pereira, who is at 194. Former University of Arkansas golfer Nicolas Echavarria is in seventh place at 198. Echavarria shot a 5-under 66 on Saturday.

Jim "Mudcat" Grant, the first Black 20-game winner in the American League and a key part of Minnesota's first World Series team in 1965, has died. He was 85. The Twins announced Grant's death Saturday. No cause was given. Grant spent less than four full seasons of his 14-year major league career with the Twins, but they were by far his best. Grant led the American League with 21 wins in 1965 -- Don Newcombe of the Brooklyn Dodgers was the first Black 20-game winner in the majors in 1951. Grant also led the league with six shutouts in 1965. He started three times in that World Series against the Los Angeles Dodgers and won twice-- including a 5-1, complete-game victory in Game 6, during which he also hit a three-run home run. The Dodgers won Game 7. Grant went 50-35 with a 3.35 ERA in 129 appearances, including 111 starts, with the Twins. He was traded to the Dodgers after the 1967 season and also wound up pitching for Montreal, St. Louis, Oakland and Pittsburgh.

Kyle Busch stayed in front through two late restarts at Fort Worth with pushes from series points leader Austin Cindric, the last going into a green-white overtime finish, to get his 99th career NASCAR Xfinity victory Saturday. It was Busch's 10th Xfinity win at Texas, where he led six times for 94 of the 171 laps and won for the second time in two starts this year -- he also won the inaugural race on the road course in Austin, Texas. Busch, whose crew chief is Chris Gayle of Little Rock, led the final 32 laps, including the four extra because of the 10th and final caution. Busch already had twice as many as Mark Martin's 49 career victories that are the second-most in series history. Busch had said in the past he would retire from the series after 100 wins, but indicated afterward that Joe Gibbs has already committed him to races into next season. The win was the 300th overall for Joe Gibbs Racing in Cup and Xfinity with Toyota. Justin Allgaier finished second and led 23 laps, never able to regain the lead despite being side-by-side with Busch on three restarts in the closing stretch. Cindric was third.

Marcus Ericsson raced to his first IndyCar victory Saturday in the action-packed opener of the doubleheader at the Raceway at Belle Isle Park in Detroit. The Swede became the seventh driver to win through seven IndyCar races this season, and he's the fourth first-time winner this year. It was the first victory for the former Formula One driver since a GP2 race at Nurburgring in 2013. It was the first victory for Chip Ganassi Racing's No. 8 car since 1994 when Michael Andretti won at Toronto. The seven different winners through seven races ties an IndyCar record set in 1958 and matched in 2000 and 2017. Ericsson benefited from the second red-flag stoppage, this one with six laps remaining when Romain Grosjean crashed in Turn 9. An earlier accident sent Felix Rosenqvist to a hospital for evaluation and caused a 78-minute stoppage to repair the tire barrier and concrete wall damaged when what appeared to be a stuck throttle sent Rosenqvist smashing into the wall. Will Power had control and led a race-high 37 of the 70 laps until the Grosjean crash.

A day after his 24th birthday, Truck Series points leader John Hunter Nemechek won his second consecutive race in the No. 4 Toyota for Kyle Busch Motorsports, leading the final 22 laps and finishing more than 3.3 seconds ahead of reigning Cup champion Chase Elliott on a steamy Saturday in Fort Worth. It was Nemechek's fourth victory of the season, and 10th of his career. With four races left before the series playoffs begin, Nemechek remained ahead of Ben Rhodes, whose 27th-place finish was his worst of the season. Rhodes had finished in the top 10 all but one other race, the lowest previously a 16th at Atlanta. Elliott led 45 laps to finish second in his first truck race at the 1 1/2-mile, high-banked Texas track where tonight he will try to win his second consecutive All-Star race. Cup driver Ross Chastain finished third.

Felix Auger-Aliassime is back in the final of the Stuttgart Open and will play Marin Cilic after both came through the semifinals on Saturday. Third-seeded Auger-Aliassime defeated American Sam Querrey 6-4, 7-5, and Cilic progressed when Jurij Rodionov retired due to injury when Cilic was leading 6-3, 1-0. Former U.S. Open champion Cilic is going for his first title since 2019 at Queen's Club. Auger-Aliassime will be going for his first title in his eighth final altogether. The Canadian lost the 2019 final in Stuttgart to Matteo Berrettini. On Saturday, he did not face a break point, and hit 13 aces to beat Querrey. Cilic won both previous meetings with Auger-Aliassime. Today's match will be their first meeting on grass. 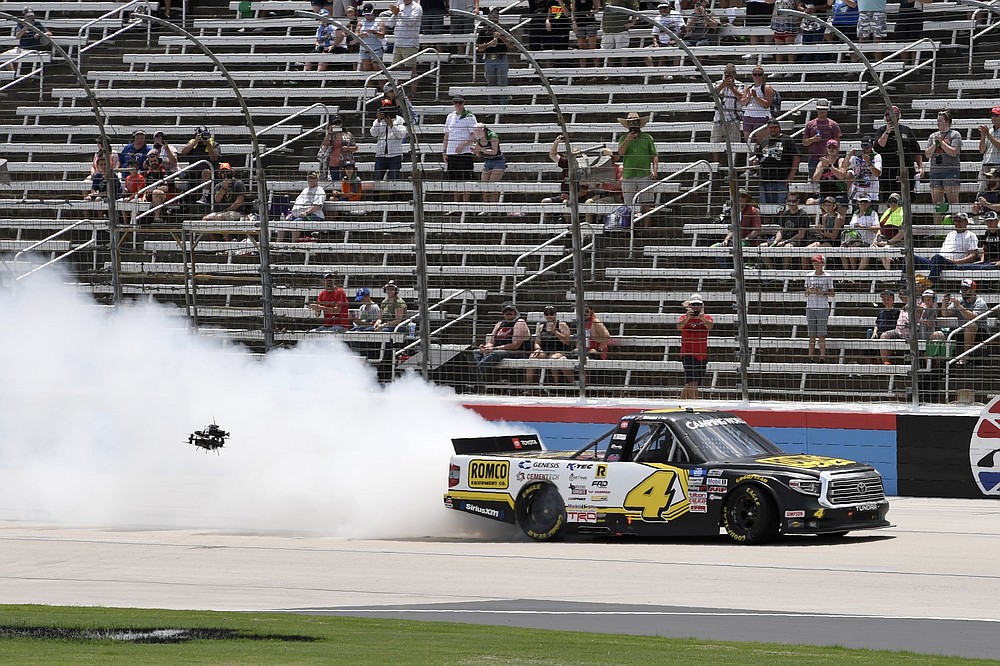 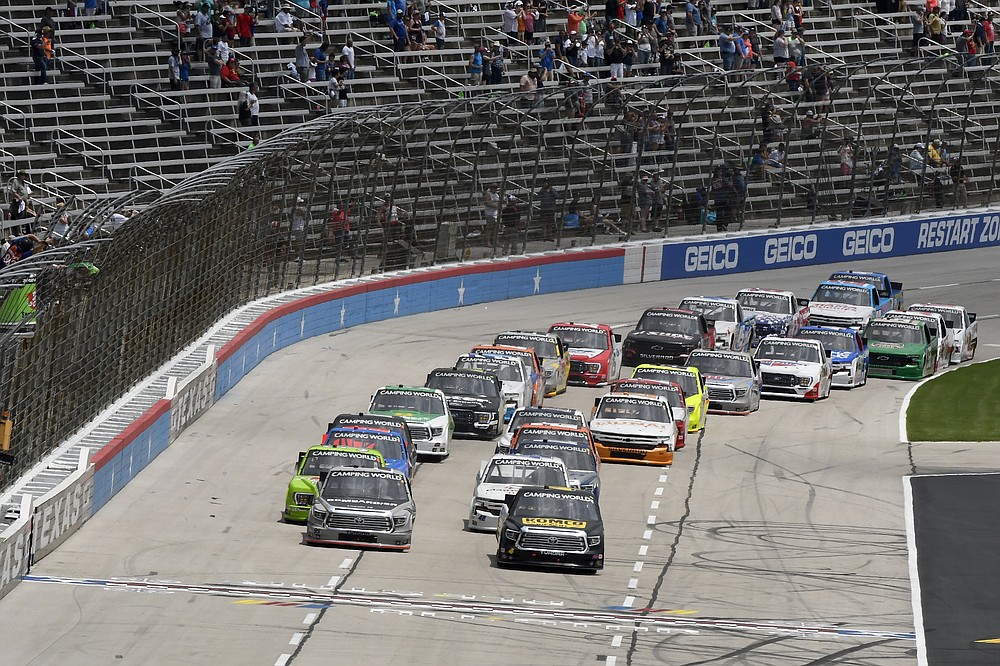 Drivers head into the front stretch as they get the green flag during a NASCAR Truck Series auto race at Texas Motor Speedway in Fort Worth, Texas, Saturday, June 12, 2021. (AP Photo/Larry Papke) 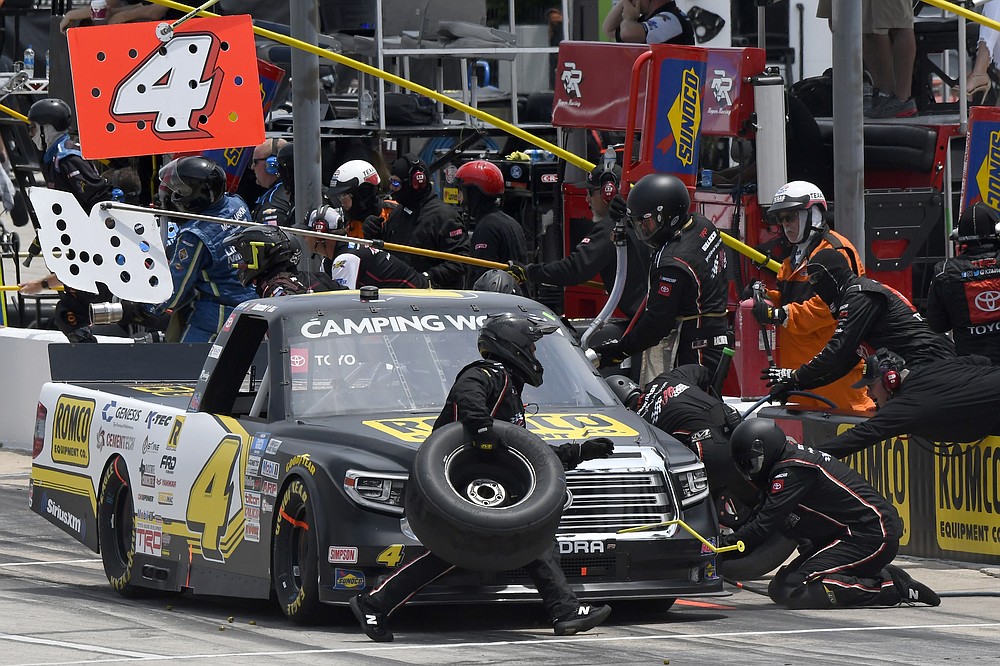 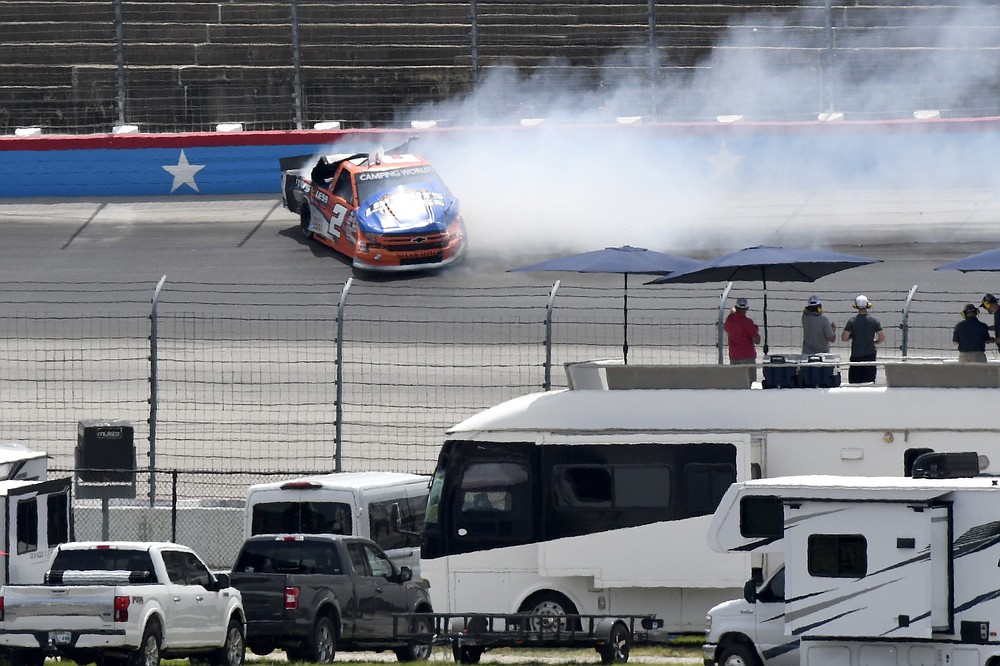 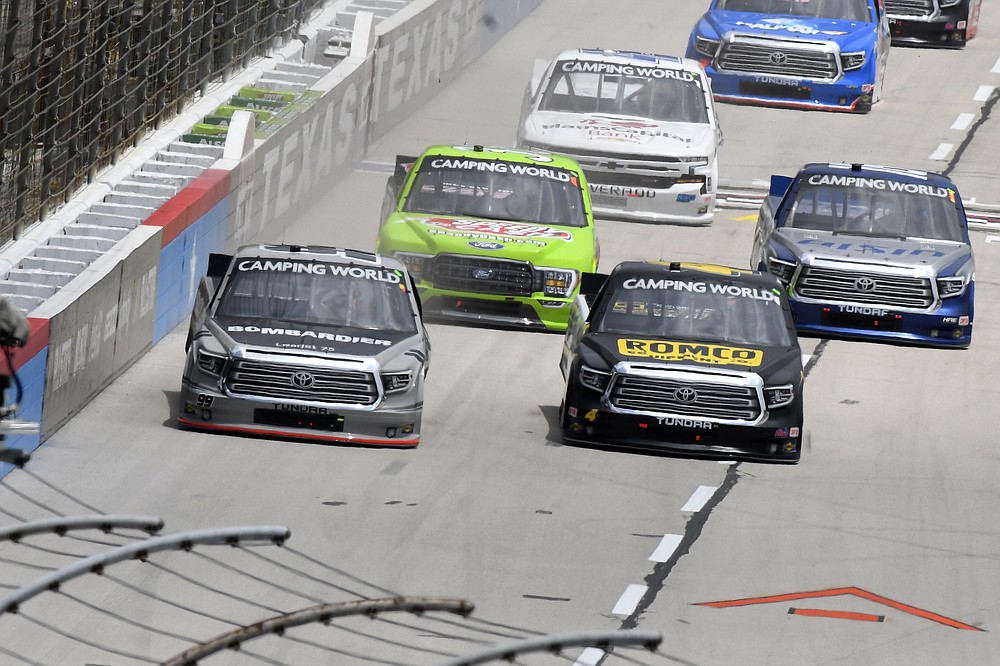 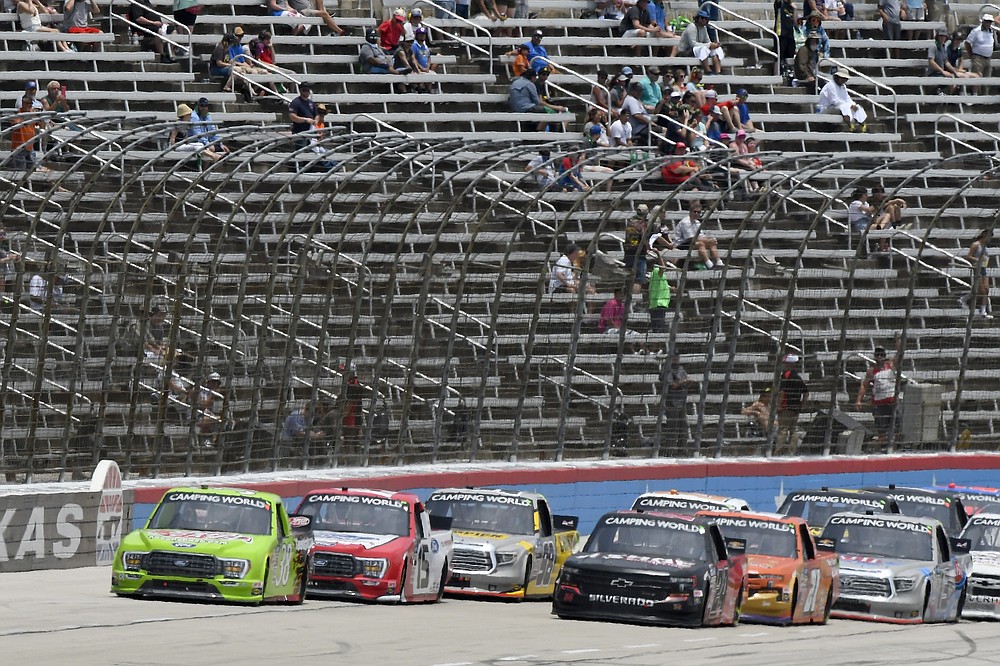 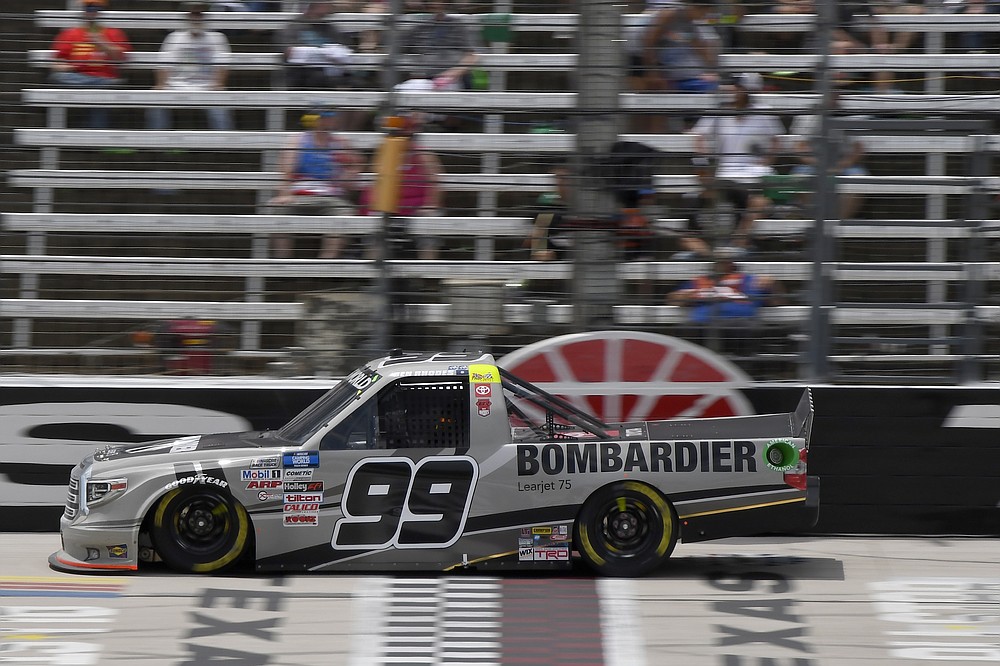