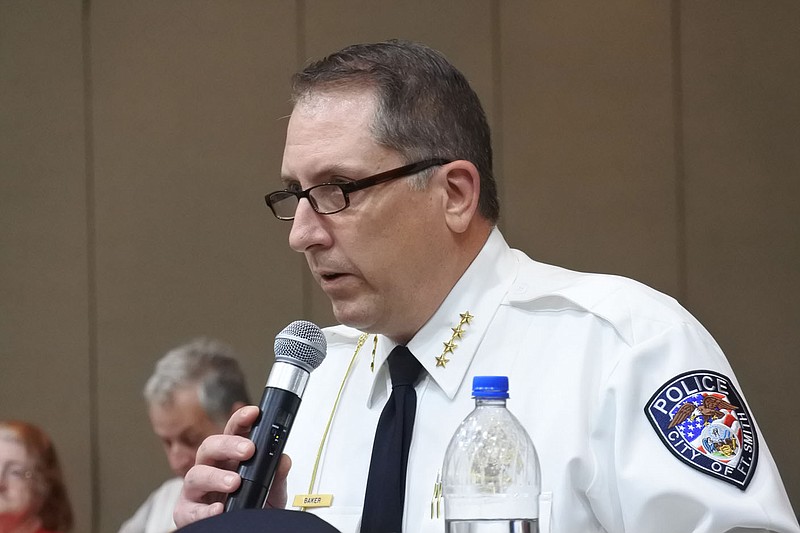 FORT SMITH -- The number of people in this city's jail fell about 33% in 2020 compared with the year before, according to the Fort Smith Police Department.

Police Chief Danny Baker presented the department's 2020 annual report during a Board of Directors study session May 25. Baker said the reduction in incarcerations saved taxpayers "hundreds of thousands of dollars."

Baker attributed the drop to department initiatives that started in 2020.

Sebastian County Circuit Judge Stephen Tabor presides over the county's drug and veterans treatment courts, and serves on the county Criminal Justice Coordinating Committee. Tabor said the Police Department has done well in a systemwide effort to help the county manage its jail population and get people into treatment when needed.

"It does nobody any good to have mentally ill people in jail," Tabor said. "It's the worst possible scenario, and, with the actions of the Police Department and the development of the Sebastian County Mental Health Court, those things are working together to address that situation."

Diverting people into treatment rather than incarcerating them saves money and improves their lives.

Baker said the department's initiatives included its Crisis Intervention Unit, which began in March 2020 as a way to intervene and help people experiencing mental, medical or any other kind of "life crisis."

"In 2020, the unit assisted with over 60 legal referrals for mental crisis and aided in 31 diversions from prosecution," Baker said. "The end result of these efforts are that those who needed help received assistance rather than being needlessly jailed."

The report says 34 of the referrals were voluntary while 28 were involuntary.

"To date, the CIU has had many success stories shared with them," the report states. "These citizens have accepted help and continued their path to recovery. One such individual completed alcohol rehabilitation out of state with the assistance of our officers. This person returned to the state and is now working full time in another community."

The department launched its Pre-Arrest Diversion Program on Nov. 9. It partnered with the Fort Smith-based nonprofit behavioral health agency Harbor House to give those who are eligible and commit minor misdemeanor offenses access to mental and behavioral health programs, and substance abuse programs, thereby keeping them out of jail and the courts, and decreasing recidivism.

"The program was born from the concept that an arrest is not always necessary to provide for the safety and well-being of the community, nor is it the best course of action for certain offenders," Baker said.

Ashley Reynolds, marketing director for Harbor House, said the Police Department diverted about 15 people through the program as of June 4. Seven people were participating in the program at the time, while three others completed it. It typically lasts 90 days.

Reynolds said Harbor House wants to address the root cause of the issues.

"Just sending somebody to jail isn't helping them deal with the reason that they got arrested in the first place," she said. "And the problem with the criminal justice system is it becomes a revolving door. Misdemeanors progress into felonies, and so if we can catch these people at this early intervention stage, we can divert them, hopefully, away from the criminal justice system long-term."

This diversion program is eligible for people 18 or older, who are not at risk to themselves or others, have no previous sexual or violent offenses, and committed eligible misdemeanor offenses, according to a Police Department news release.

A third new program in 2020 that Baker brought up was the Vulnerable Persons Registry, the implementation of which was announced in July. It invites the relatives and guardians of certain vulnerable residents to provide information about them to the department, allowing it to respond more quickly and have critical information about these residents' identities, medical or mental issues in case they disappear or are otherwise in crisis.

Mitchell said this helps police officers understand that someone has a mental health issue before they answer the call, allowing officers to direct the person to mental health services more quickly. Having someone in the registry also lets officers know ahead of time if they should direct that person to these services, rather than the jail.