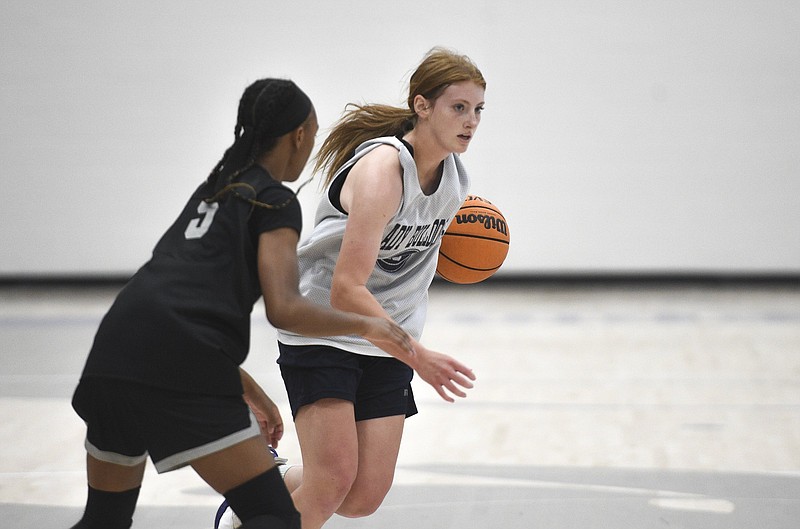 ROGERS -- The Greenwood Lady Bulldogs lost four starters to graduation, but it was tough to tell watching them Thursday and Friday at the Rogers High basketball team camp.

They rolled over Class 7A state runner-up Fayetteville and dominated the host team as well. They were missing a couple of their more experienced returnees, too.

Coach Clay Reeves said it's not really those four that he's concerned about this summer. It's some of those others, who will help continue the Lady Bulldogs' tradition of having quality depth that will get a long look during team camps, Reeves said.

"We need to see those people against some of the best teams," Reeves said. "It's the next four, five or even six or seven that we want to see what they can do."

Reeves pointed out juniors Adriana Rusin and Ella Williams are a couple of players he expects to step forward. He compared Rusin to Haven Clements, who did many things other than scoring that contributed to the team's success.

"Adriana was in our rotation last year, but we're expecting a lot bigger things from her to fill the post spot, rebound and play defense," Reeves said. "Clements was one that people don't mention for scoring, but she was kinda the glue, did all those things that you need that people don't necessarily see."

Coach Vic Rimmer isn't exactly starting over. He returns three starters from last year's Class 6A state runner-up. But Rimmer used team camp this week to get a look at who might be the next floor general for the Lady Purple Bulldogs.

Rimmer talked about Claudia Bridges, who is headed to North Alabama in the fall, along with Maya Mayberry and Pink Jones as examples of consummate point guards. Rimmer's currently still searching for the player who will fill Bridges' shoes.

"And point guard play is everything, man. We've got some really good potential there and I like our options. It's just gonna be the process of me, the staff and the kids figuring out who's gonna be in charge of that gig."

Returners Loren Lindsey and Wynter Beck, who both enjoyed big moments last season in Fayetteville's run to the state finals, could each handle the job, Rimmer said. But freshman Whitney Brown could also be that person eventually.

With so many players playing with different summer teams, Rimmer squeezed in team camps this week -- Thursday and Friday at Rogers and Monday and Tuesday at Pulaski Academy. So this is the only time he gets to see his group against competition this summer.

But it's not a huge issue.

"We've got kids that can handle the ball, get the ball down the floor and get us where we need to be," Rimmer said. "It's just in the Pink Jones era, the Maya Mayberry era, the Claudia Bridges era, it was easy to see this is who it is. I'm hoping that will happen, not just ready to say who that is quite yet."

The Lady Mounties graduated seven seniors, including four that started at different times. Coach Preston Early likes the core group that returns, but eight days of summer competition gives him the chance to build some chemistry.

"We lost a lot of veteran leadership and toughness and depth of knowledge of how we play," Early said. "That's what we're in the process of trying to build right now."

Early said Miller, who recently verbally committed to play at Henderson State, is progressing well in her rehab. Abby Harris is another who saw significant playing time.

In addition, senior Kennedy Blockburger, who transferred from Rogers Heritage, is also vying for playing time along with freshman Brooklyn Owens and senior Perla Morales.

Summer camp is valuable to help develop some team chemistry both on and off the court, Early said.

"We're trying to do both," Early said. "That's why we're really glad we get to take a road trip, but the other thing is we want to have fun doing this. We try to make this what you might say is a low-pressure environment where we can learn and not be afraid to make mistakes."

The Lady Tigers will look different for sure with the graduation of 6-4 McDonald's All American Maryam Dauda. But team camps give coach Tom Halbmaier the chance to help define players' roles.

Guard Jada Brown, a Rice commit, will get more attention from opponents with Dauda's departure along with two other starters. But she's ready for it, Halbmaier said.

"Her role will be more challenging, simply because they'll be keying on her more," Halbmaier said. "Maryam was always the center point of the opposing defense. We'll have to get more creative to get her those shots."

Bentonville lost a close game in the camp against Little Rock Central on Thursday that could easily be a state tournament matchup next season. The Lady Tigers were within one possession with less than two minutes left. Halbmaier said his team has areas to improve for sure, but expects the puzzle to fit together by the time the season rolls around.

"We'll have to shoot the ball better and do a better job getting to the free-throw line," Halbmaier said. "We're going to have to manufacture extra possessions whether that's working harder on rebounding, double teams or things of that nature.

"We'll need to find different ways to score. They'll be fine. We will just have to find that rhythm and get acclimated."

The Lady Red Bulldogs will be much younger, but coach Heather Hunsucker saw some growth even in just a day at the Rogers team camp.

Springdale returns just two starters, but will likely start two freshmen and a sophomore in the backcourt. In addition, another freshman and two more sophomores will see action off the bench.

Despite getting off to a slow start on Thursday, Hunsucker liked the way her team finished the day.

'We were pretty proud of the way we ended it," Hunsucker said. "Even not shooting well, we really shared the ball. We got the ball to the right spots and we defended and rebounded a lot better.

"We're not huge. We're little bitty at guard. I thought they did a lot better job as the day went. We couldn't buy a layup. We couldn't buy anything, but I thought we played better in many areas of the game and we made some defensive adjustments on the fly and when you can do that with a brand new group, you're pretty happy as a coach.

"The talent is there. We have a lot of growing to do, but we're excited."