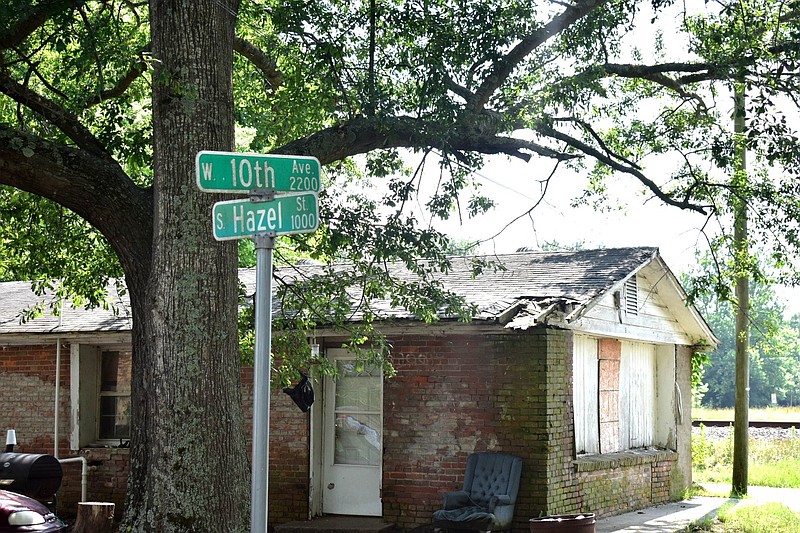 An apartment complex at South Hazel Street next to a railroad track was the scene of the shooting Thursday that killed Kevin Brazell, 43. (Pine Bluff Commercial/I.C. Murrell)

The number is staggering -- and frustrating -- for Pine Bluff-area residents.

Counting a killing that occurred just outside the city limits, six homicides have happened in the area within a six-day span that began last Saturday. Five of them were shootings. Four of them happened on four straight days. Four of them happened within a 1.3-mile radius, and investigations in three of those -- including one that took the life of a 14-year-old girl -- have not yet revealed a suspect.

Two killings occurred Thursday. One was described as hit-and-run incident.

In just one week, the annual homicide count in Pine Bluff has nearly doubled, to 12, and the number of killings in Jefferson County outside Pine Bluff city limits this year has risen to three.

Community leaders, including United Citizens of Pine Bluff co-organizer Kymara Seals and New Life Church Pastor Matt Mosler, have spoken out this week about ideas to curb the violence, beginning with reaching out to young people and educating them about options away from a life of crime.

Albert Brewer does that with his Pine Bluff boxing club, Gloves Not Guns. Boxers from the group competed last Saturday in the Arkansas State Silver Gloves championships at the Pine Bluff Convention Center.

"I use Gloves Not Guns also as a platform against all this gun violence and it's been awhile," said Brewer, who has mentored young boxers in the city since 2000, via text message (edited for clarity). "We the community knows who [are] doing the shootings and killings, but no one will come forward, but when it hits home, they want you to come forward.

"The community doesn't trust law enforcement. Law enforcement has to have some help if we [are] ever going to get a handle on this."

Pine Bluff Police Lt. David DeFoor and Mayor Shirley Washington have said investigators have been active in unearthing clues related to three shootings in which no suspect has been identified. It is not clear whether those shootings are related.

A Pine Bluff man accused of fatally shooting Kevin Brazell, 43, Thursday night was arrested at the scene of the crime, police said in a news release.

Police say Peal gunned down Brazell in the area of West 10th Avenue and South Hazel Street at about 9:08 p.m. Peal was booked into the Jefferson County jail at 12:51 a.m. Friday.

According to an affidavit from Detective Jason Boykin read by Jefferson County Deputy Prosecuting Attorney Caleb Conrad, witnesses directed an officer to where Brazell lay on his back with multiple gunshot wounds on the northeast corner of an apartment building, the address of which DeFoor later updated as 2200 W. 10th Ave. Across from that address, the rear of Chester Hynes Community Center can be seen.

Brazell lay unresponsive with a gun in his right hand, according to the affidavit, and was pronounced dead at the scene.

A witness said she saw Brazell fighting with Peal in a parking lot before the shooting, according to the affidavit. She reportedly saw Brazell leave the complex and then return, adding she saw the victim with a gun, heard gunshots and ran away.

Peal was arrested at the scene, police said. According to the affidavit, he told police Brazell left because "he felt he got beat up so bad" and then returned and exited a vehicle with a gun in his hand. The suspect alleged that Brazell started cussing and pointed a gun at Peal, "starting to fire it."

Peal allegedly told police he "started to duck and hide and began shooting back at Brazell," Conrad said.

"Peal knew he was a convicted felon and he ran south on the railroad tracks next to the apartments and threw the gun into the bushes and trees somewhere," Conrad read. "Peal stated it was a 9mm handgun."

Peal indicated to Bridgforth he would hire an attorney. He is scheduled for another hearing July 21.

Brazell died within the same short radius of where three other shootings happened this week.

At about 1:50 a.m. Thursday, Tyrone McClinton, 45, was killed in an alleged hit-and-run incident on Dollarway Road. The suspect in McClinton's death, Justin Tillar, 21, of Pine Bluff, was charged with leaving the scene of an accident.

In an affidavit from Pine Bluff Police Detective Ryan Edwards read by Conrad, an officer was dispatched to 6310 Dollarway Road, where he observed first responders attending to a male a witness identified as McClinton. The officer reportedly said he saw multiple lacerations to McClinton's head.

The witness, Conrad read, said he and McClinton were walking south on Dollarway when they noticed a vehicle speeding. The witness reportedly told McClinton to get out of the road as they were walking east with traffic and approached the address.

A silver Chevrolet Equinox allegedly jumped a curb at the address and struck McClinton, then continued south on the road. The witness reportedly told police he saw the Equinox come behind them and jumped into a grass area before the vehicle struck McClinton and slowed down on Phillips Street, continuing east of Dollarway Road.

Tillar was taken into custody and told police he got off work at approximately 1:45 a.m., driving his girlfriend's Equinox, Conrad read. Tillar reportedly said he was traveling east on Dollarway to go home when "he heard a loud noise and then he drove over something."

Bridgforth set bail at $50,000 secured for Tillar, who has no prior criminal history.

A homicide was committed in Jefferson County each day between last Saturday and Tuesday, with the last three taking place within Pine Bluff city limits.

Monday's shooting claimed a 14-year-old girl found in a car between West 23rd and West 24th avenues on South Maple Street, according to police. Investigators say the shooting took place at the intersection of 23rd and Maple.

Police have declined to identify the girl due to her age, citing a state law that has not yet been specified. A person reached at Paradise Funeral Home in Pine Bluff confirmed to The Commercial that Janija McGown, 14, was the victim in that homicide.

A death notice for McGown was posted on Paradise's website.

On Sunday, Brandon Dement, 36, was found with a gunshot wound in front of a residence at 2120 S. Maple St. and died at Jefferson Regional Medical Center.

On Tuesday, Jason Anderson, 38, was found lying between Seventh and Eighth avenues with multiple wounds from a shooting that occurred in the area of 2000 W. Eighth Ave., according to police. That area is located more than a mile north of the Maple Street homicides in an almost straight line.

Police have neither identified a suspect nor confirmed whether any of those three homicides are related as of Friday afternoon. Those killings were still under investigation.

Last Saturday, Zakary Chumney, 35, of Mabelvale was shot at 10256 Sulphur Springs Road following an argument among him, Bradley Scott Hartley, 34, and Hartley's reported girlfriend, Opal Evelyn King, 25, according to the Jefferson County Sheriff's Office. Hartley reportedly surrendered to investigators after allegedly fleeing into a nearby wooded area and is held in the county jail pending a $750,000 secured bond.

Hartley in 2014 pleaded guilty to five felony offenses related to a 2013 burglary in Cleveland County.

King, 25, was charged with aggravated assault for allegedly ramming into Chumney's vehicle during the alleged argument and hindering apprehension or prosecution for allegedly misidentifying Hartley to authorities. She is held in lieu of a $50,000 secured bond. 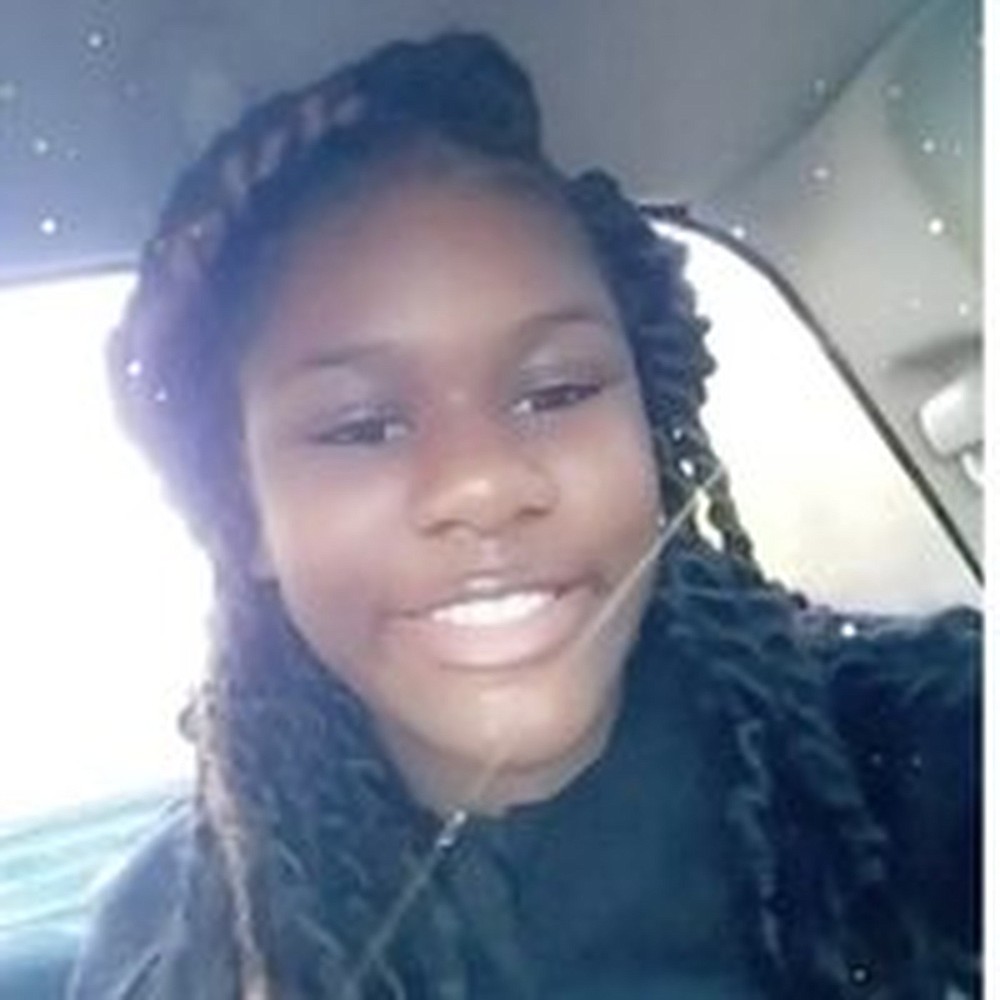 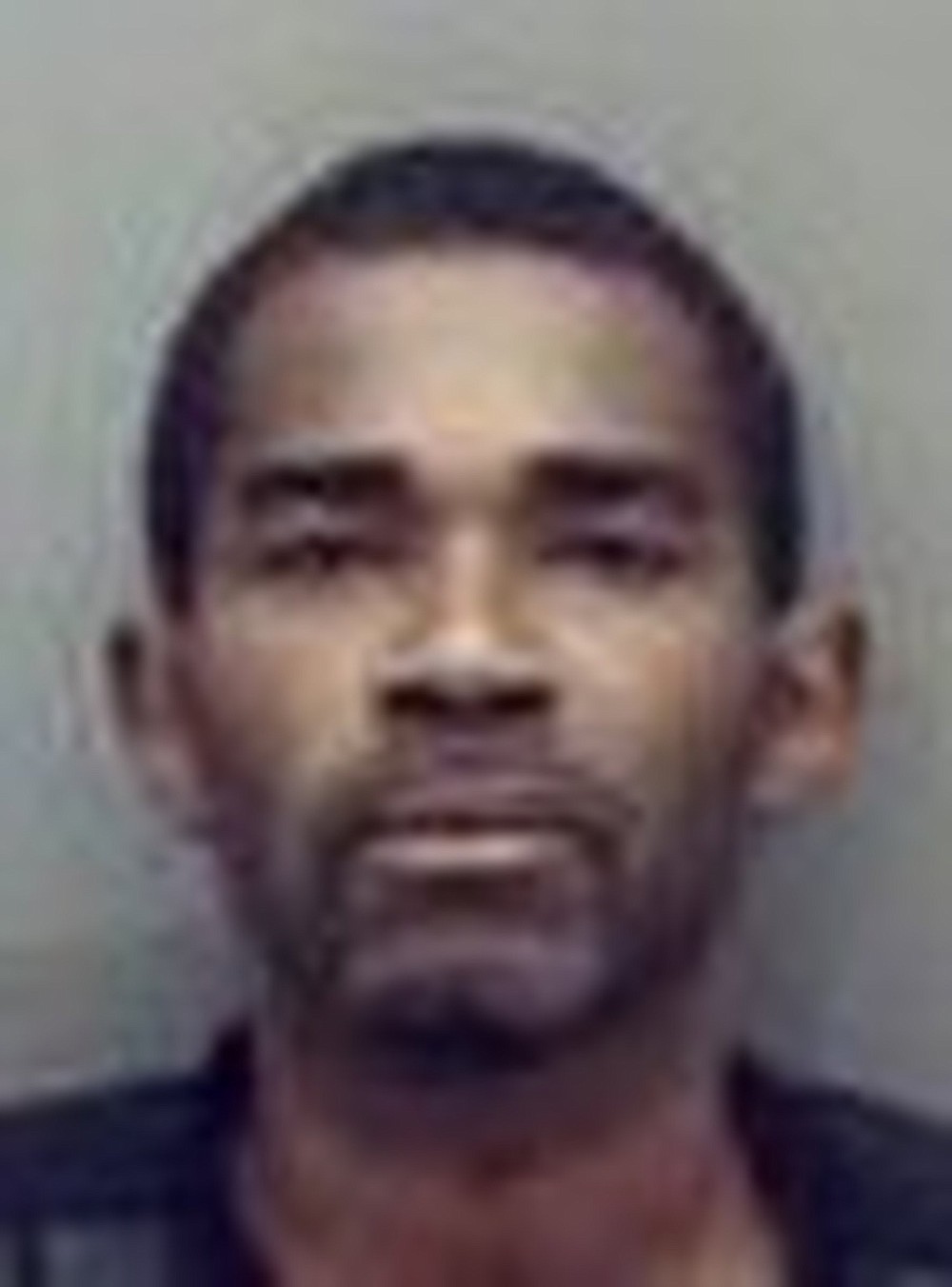 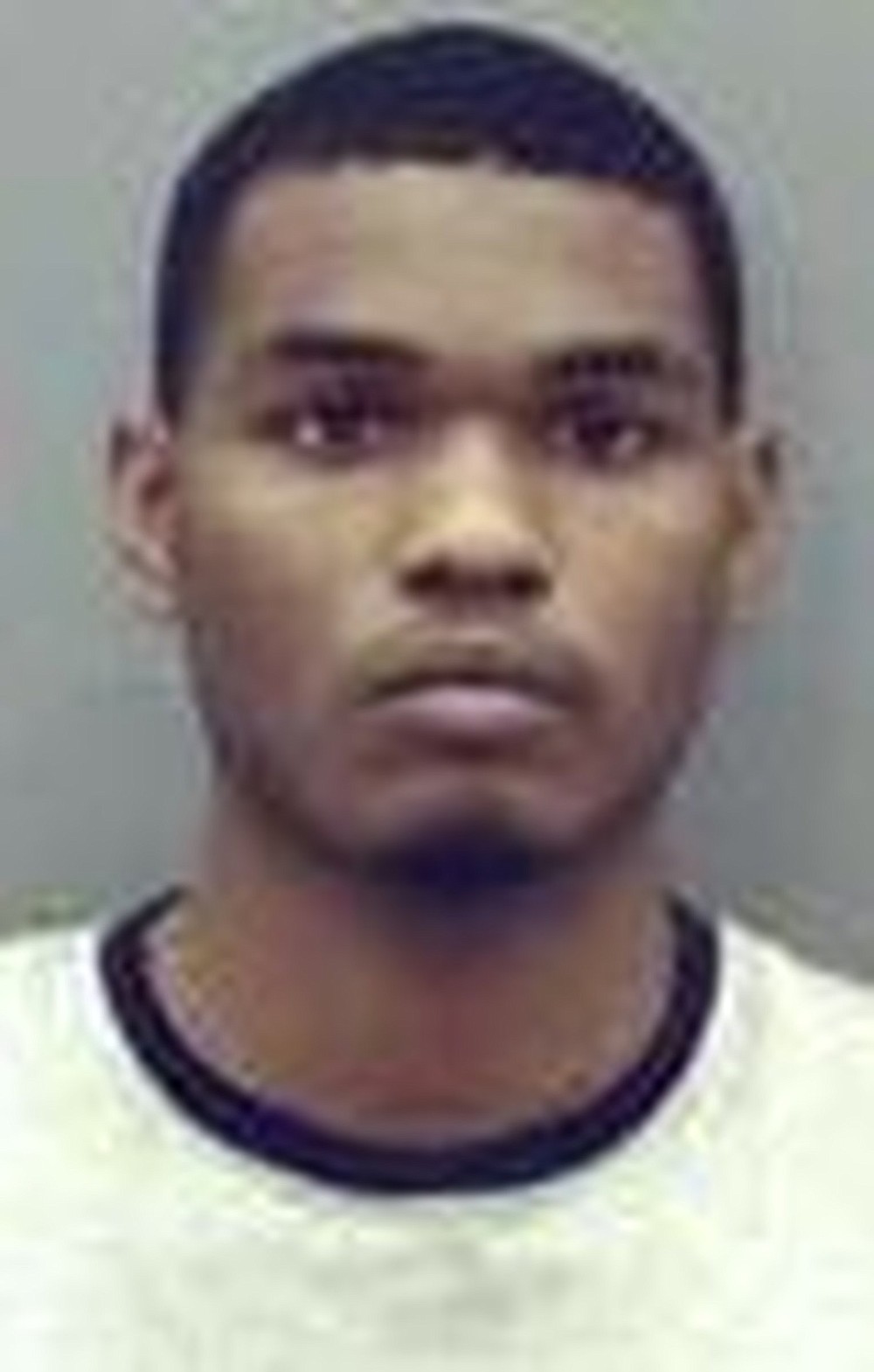 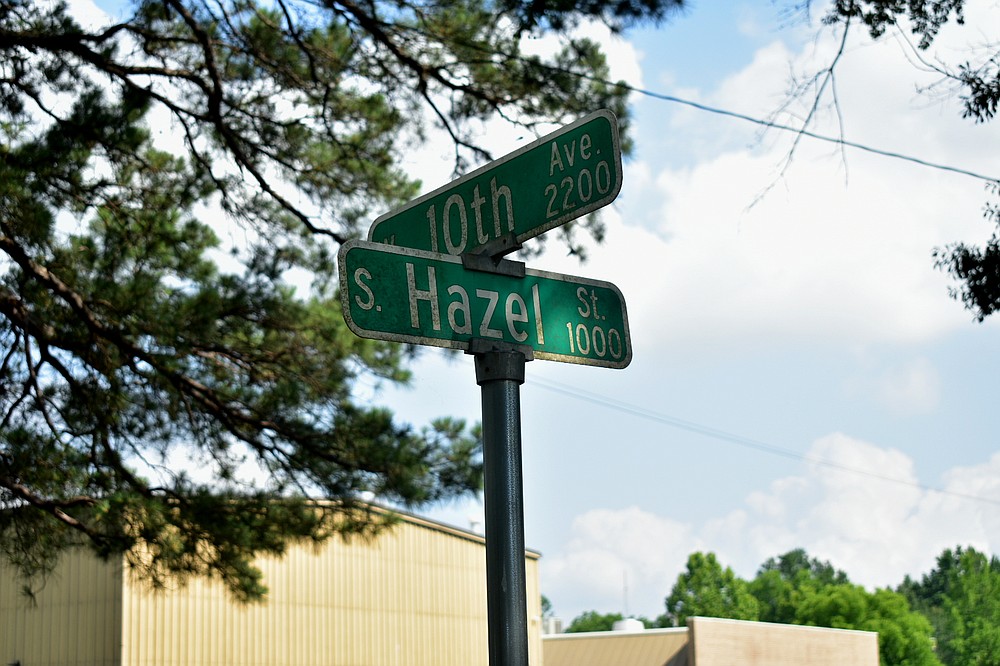 Chester Hynes Community Center can be seen across from an apartment complex on the intersection of West 10th Avenue and South Hazel Street, the scene of a shooting that killed Kevin Brazell, 43, on Thursday, June 10, 2021. (Pine Bluff Commercial/I.C. Murrell)
ADVERTISEMENT