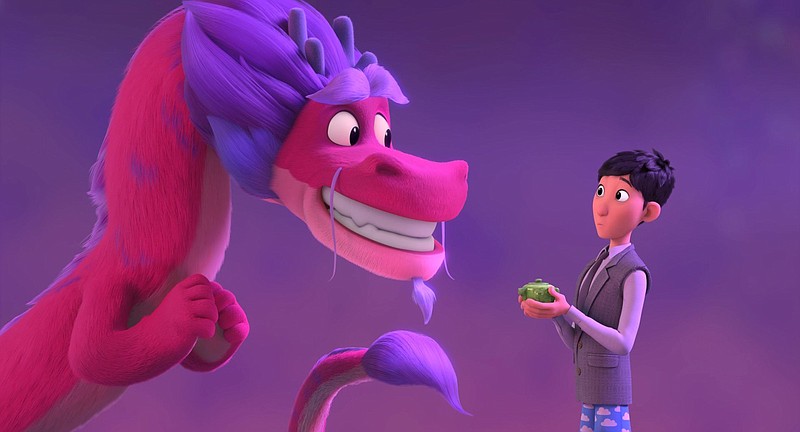 Determined teen Din (voice of Jimmy Wong) is longing to reconnect with his childhood crush when he meets a wish-granting dragon (John Cho) who shows him the magic of possibilities in Netflix’s not-quite-good “Wish Dragon.”

Have you ever watched a film that had the elements of a good movie at its disposal but never quite brought them all together? It's maddening to see that happen. Some good, some bad, some closer to one category or the other.

Film critique is subjective. I'm sure there are people out there who read my reviews (at least two or three of them) who think, "This girl doesn't know what she's talking about. I loved that movie!" or "Wow. She got that completely wrong. I hated that movie!"

But my job as a critic and passionate fan of film (especially animation) is to watch things before they're released to the general public and share my thoughts. I draw a line in the dirt and say, "good movies to the right, bad movies to the left."

Some movies get really close to that line.

Today a new movie drops on Netflix called "Wish Dragon." If you've watched the trailer, you know it seems like a Chinese take on "Aladdin."

Sony Pictures Animation and Base FX are responsible for this new movie. Be relieved it's not another "Hotel Transylvania" sequel. (What's that? There's another one of those coming out next month? Excuse me while I flip my desk over in rage.)

OK, now that I've got my desk mostly back in working order, let me say Sony Pictures Animation has done some amazing stuff lately with "Into The Spider-Verse" and "The Mitchells vs The Machines," the latter of which is my favorite new movie so far this year.

It's frustrating that "Wish Dragon" doesn't live up to this standard. Is it as bad as "The Emoji Movie"? No. It's light years ahead of any of the "Hotel Transylvania" sequels. But it's still a few inches short of a decent movie.

The story follows a hard-working delivery driver in Shanghai named Din (Jimmy Wong). As he's trying to reunite with his childhood crush, a god gives him a powerful dragon in a teacup to grant him three wishes.

When I asked my wife if it was unfair to compare "Wish Dragon" to "Aladdin," she said doing so felt like comparing "Kimba the White Lion" to "The Lion King." She was ultimately a little more forgiving of the film than I was.

I do have something nice to say about this movie. For starters, the opening scene with a young Din making friends with Li Na (Natasha Liu Bordizzo) is really cute and funny. The two best things about "Wish Dragon" are the relationship between Din and Li Na and the film's humor.

The humor is some really silly and oddball stuff. "Wish Dragon" actually had the guts to show Din and Li Na raising a chick as kids, watching it grow into an adult, and then later eating said bird over its tombstone. Lord knows "Moana" didn't have the chutzpah to do that.

Throughout the movie, Din is chased by three henchmen who were hired to get the teacup. Never mind the fact this movie doesn't explain how their boss learned about the teacup or how they knew where it'd be since Din is literally given the object by a nameless god in a rundown apartment.

The lead henchman is a creepy looking bald guy who keeps his hands in his pockets, and uses his feet for everything. He uses them to point, to open doors, to break physics, to fight and more. That's the kind of silliness this movie engages in. And when I'm laughing, I believe "Wish Dragon" could actually be a decent movie.

Speaking of the wish dragon (named Long), that's one of the biggest letdowns of the film. The dragon is voiced by John Cho, whom I adore as Sulu in the recent "Star Trek" movies. It's probably not fair for me to compare John Cho to Robin Williams (who voiced Genie in "Aladdin"), but that man set the standard for animated wish-granting beings.

Cho doesn't come across as funny and gives an uneven performance as Long. The nicest thing I can say is by the movie's end, his role as Long works its way up to serviceable.

The god (Ronny Chieng) who gives Din his wish dragon is the opposite of funny. I actually hated the character because it seems like the audience is just supposed to laugh at him for saying random things like, "I am a god!"

And whereas the wishes in Aladdin feel smart, it seems like "Wish Dragon" dissects the concept in the worst possible ways. Doubtless you'll recall Genie outlining three rules about his wishes to Aladdin. He can't kill anyone, he can't make anyone fall in love, and he can't bring back anyone from the dead.

In "Wish Dragon," those first two rules are repeated, but the third is swapped out for time travel, which seems odd until you realize the script writer (and director) Chris Appelhans just wanted to leave a loophole for the movie's resolution. He probably thought I wouldn't notice, but I did.

The first wish Din makes parallels Aladdin's. Aladdin wants to reunite with Princess Jasmine. And Din wants to become rich to meet the now-famous Li Na. But while Aladdin simply wishes to become a prince, and Genie takes care of all the details, parade, outfit, illusion of wealth, etc, Long complicates things.

Long tells Din wishing for a Rolex watch, fancy car, hired help, etc. would be "like 10 different wishes." So for some reason, all those things become a single wish if Din compromises and is only wealthy for 24 hours.

I can't imagine why Appelhans thought that would be a smarter way to go. If there's one thing kids love, it's technicalities and regulation. (Don't believe me? Ask your kids what their favorite part about "Star Wars: Episode 1 -- The Phantom Menace." I bet they'll say the politics surrounding galactic trade and commerce.)

The animation has some good moments. Vince Gilligan got me addicted to point-of-view shots, and now I love them. Coincidentally, this film actually opens with the point of view of Long having the doors of Heaven slammed shut in his face. I liked that. And although it's a minor detail, I really liked the fuzzy texture on Li Na's white sweater. A+ to the artist who rendered that.

I can appreciate the moral lesson "Wish Dragon" tries to teach about making the right wishes in life based on what's really important. But Din and his dragon just don't have enough chemistry or the right story to quite pull that off. The movie makes an attempt by showing us who Long was in a past life, but it feels hollow. In part this is due to Cho's uneven performance; and the other part might be that Din and Long don't seem as close as Genie and Aladdin were. They seem more like acquaintances than friends by the end of the movie.

There's also a confusing story element during the climax where Long is punished for doing the right thing. It made zero sense, like other inconsistencies in the movie.

"Wish Dragon" is at its best when it's silly and when it focuses on Din and Li Na having fun together. I'd have been fine if the movie had just been about Din trying to get back into Li Na's life after she became rich and famous, sans dragon and wishes. That might have actually fixed most of my complaints with this movie.