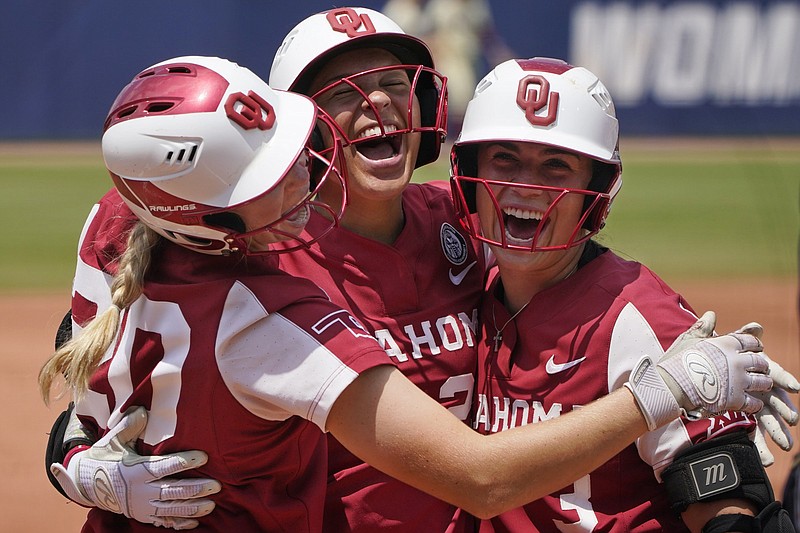 Oklahoma’s Jayda Coleman (center), Grace Lyons (right) and Jana Johns celebrate after Coleman’s home run in the second inning of the Sooners’ victory over Florida State on Thursday in the final game of the Women’s College World Series. (AP/Sue Ogrocki)

The Sooners lacked a dominant pitcher heading into the series but Juarez answered the call, allowing one run on two hits in the decisive Game 3. Oklahoma won Game 2 6-2 behind Juarez, who went 5-0 at the World Series and was named Most Outstanding Player. The left-hander allowed four runs in 31 1/3 innings.

Juarez, a super senior, was a first-team NFCA All-American in 2019 but had surgery on her left arm last year and struggled to regain her form.

"The beginning of the season wasn't great for me, but I just kept grinding and trusting God's plan for myself. He had this moment planned for me," Juarez said.

Much of the crowd stood when Juarez took the circle in the seventh inning. Fittingly, the final out was a popup into her glove.

"Honestly, I was kind of hoping it didn't go in the sun and that they would let me catch it," she said. "But I mean, it felt so slow motion, and then just to look up after I caught it and see (Kinzie) Hansen running at me -- surreal, awesome moment."

After Juarez secured the catch, teammates mobbed her and "Boomer Sooner" blared over the sound system as the crowd of 10,830 at USA Softball Hall of Fame Stadium -- mostly Oklahoma fans -- celebrated the win just 25 miles from campus.

It wasn't easy for the top-seeded Sooners -- they came out of the losers' bracket after dropping a stunner to Odicci Alexander and unseeded James Madison in the tournament's opening game. But Oklahoma beat James Madison twice in the semifinal round, then recovered from a loss to Florida State in the championship series opener.

Jocelyn Alo hit four home runs in the World Series, including the go-ahead blast in Game 2, on her way to All-Tournament honors. Her home run in Game 3 was her 34th of the season. The USA Softball Collegiate Player of the Year extended her school single-season record.

"We knew that we wanted to set the tone pretty early," Gasso said. "Jocelyn Alo is made differently. When she puts her mind to something, she gets it done, whatever it is."

Oklahoma left fielder Mackenzie Donihoo went 10-for-21 in the World Series and made several outstanding catches during the week to also earn All-Tournament honors.

Florida State (49-13-1) was seeking its second national championship in the past three World Series under Coach Lonni Alameda. The 10th-seeded Seminoles finished second in their conference during the regular season, lost in the semifinals of the ACC Tournament and had to win twice at No. 7 seed LSU in super regionals. They lost their World Series opener before winning five in a row to get to the brink of a national title.

"I'm just so proud of the team to be here and everything we've gone through this year to persevere and to be in this moment is what we dreamt of," Florida State center fielder Dani Morgan said. "I'm just proud of this team. We were able to get here and give everything we had."

Florida State's Kathryn Sandercock gave up one hit in 3 1/3 innings of relief in the final game. She won three World Series games.

Florida State freshman Kaley Mudge set the record for hits in a Women's College World Series with 14. She had 16 hits all season before arriving in Oklahoma City.

"I'm just blessed to be here, honestly," Mudge said. "Coming into the World Series, I did not think that I was going to break any records. I was just excited to put my feet on the clay here."

Alo's home run got things started for Oklahoma on Thursday. Jayda Coleman poked one just over the fence in the second inning to give the Sooners a 2-0 lead and the early jolt they had been lacking for much of the week.

Florida State got its only run in the third when Oklahoma's Tiare Jennings lost a popup in the sun, allowing Kalei Harding to score.

Oklahoma responded quickly. With the bases loaded and two outs in the third, Jennings scored on a wild pitch by freshman reliever Emma Wilson. Coleman then hit a hard line drive off the wall to score two and give the Sooners a 5-1 lead. 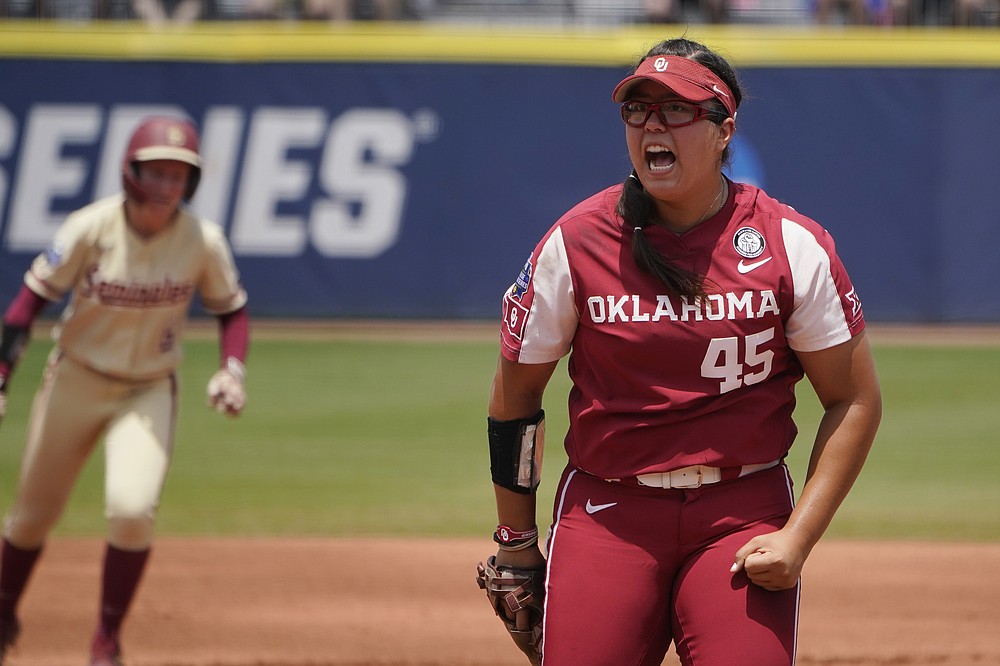 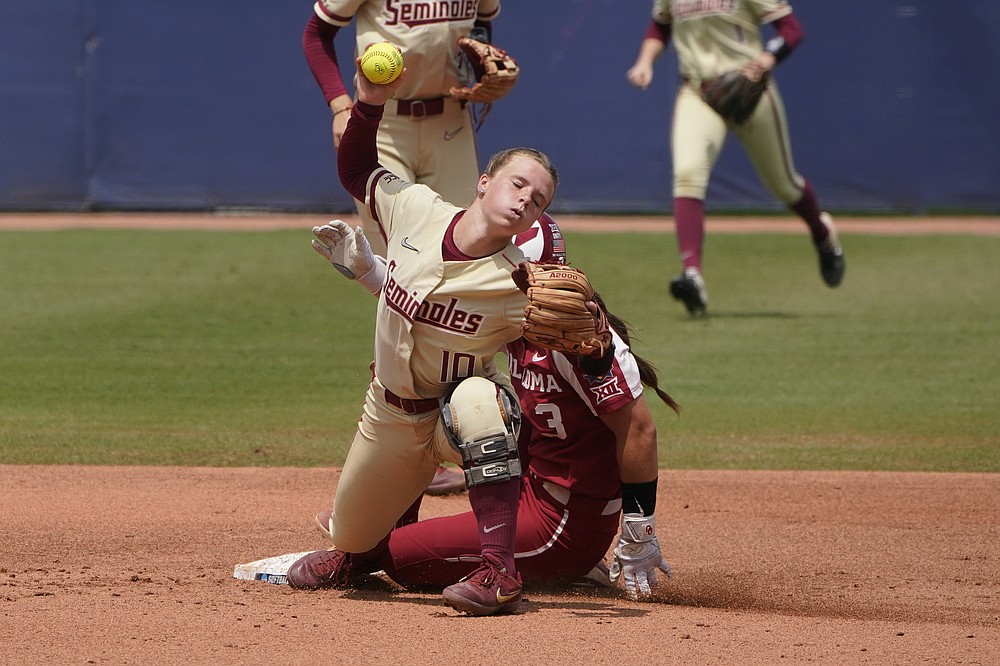 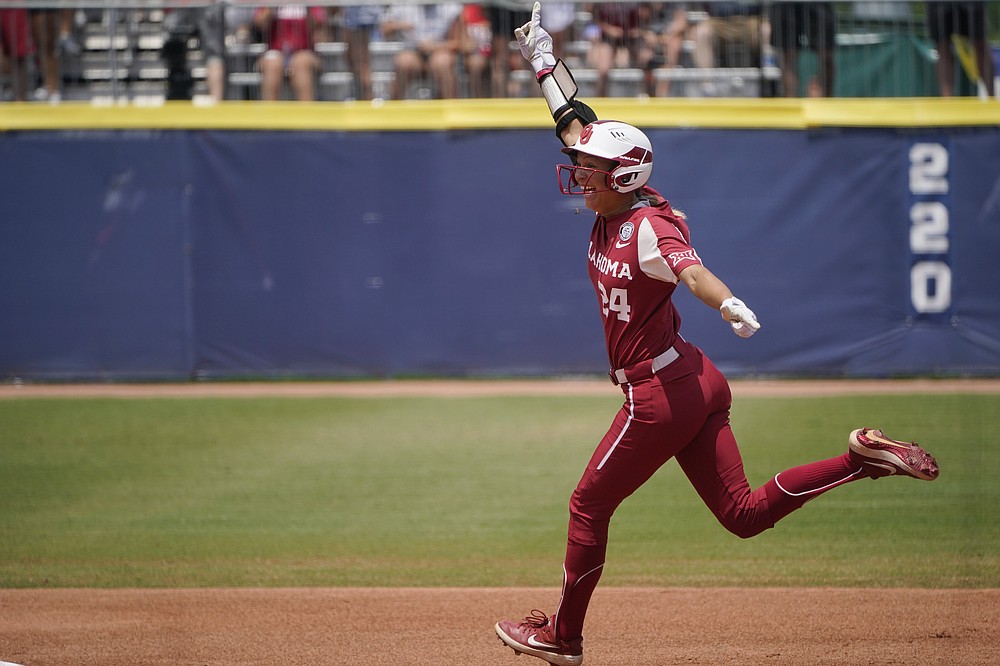 Oklahoma's Jayda Coleman (24) celebrates as she runs around the bases with a home run in the second inning of the final game of the NCAA Women's College World Series softball championship series against Florida State, Thursday, June 10, 2021, in Oklahoma City. (AP Photo/Sue Ogrocki) 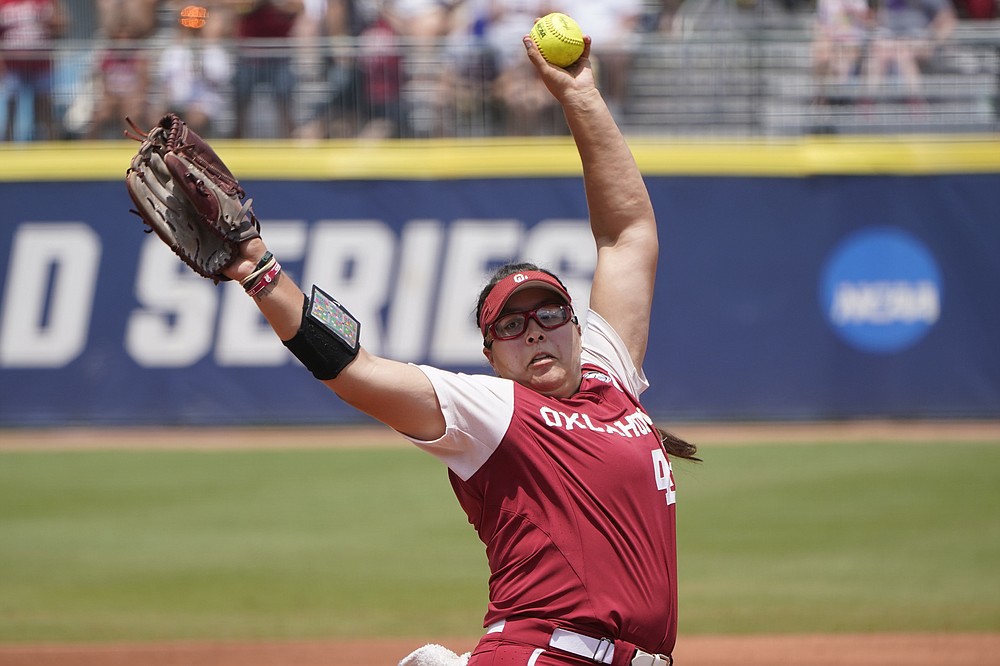 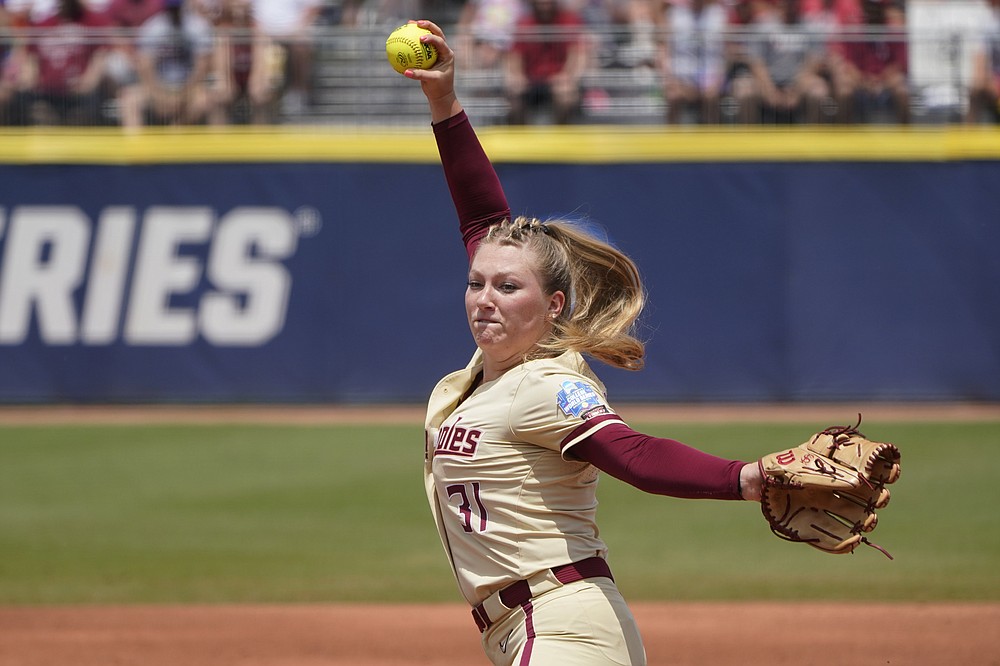