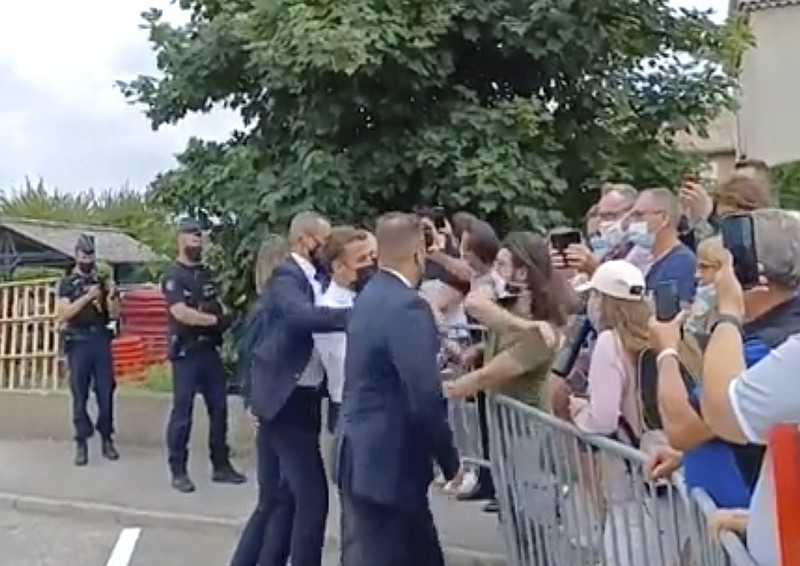 In this grab taken from video France's President Emmanuel Macron, centre, is slapped by a man, in green T-shirt, during a visit to Tain-l’Hermitage, in France, Tuesday, June 8, 2021. Macron denounced “violence” and “stupidity” after he was slapped in the face Tuesday by a man during a visit to a small town in southeastern France. The incident prompted a wide show of support for the head of state from politicians across the ideological spectrum. A video shows a man slapping Macron in the face and the president's bodyguards pushing the aggressor away as the head of state was quickly rushed from the scene in the town of Tain-l’Hermitage. (BFM TV via AP)

Slapper of Macron given 4-month term

VALENCE, France -- A 28-year-old Frenchman who described himself as a right-wing or extreme-right "patriot" was sentenced to four months in prison Thursday for slapping President Emmanuel Macron in the face.

Damien Tarel was also banned from ever holding public office in France and from owning weapons for five years over the swipe Tuesday, which caught Macron's left cheek with an audible thwack as the French leader was greeting a crowd.

During Thursday's trial, Tarel testified that the attack was impulsive and unplanned, and it was prompted by anger at France's "decline."

The court in the southeastern city of Valence convicted him on a charge of violence against a person invested with public authority. He was sentenced to four months in prison and handed an additional 14-month suspended sentence. His girlfriend broke down in tears.

Macron wouldn't comment Thursday on the trial, but insisted that "nothing justifies violence in a democratic society, ever."

ROME -- Pope Francis on Thursday rejected the resignation of Cardinal Reinhard Marx, the archbishop of Munich, who had sought to leave his position last month in a gesture to take personal responsibility on behalf of the entire church hierarchy for decades of sexual abuse by priests and unaccountability by bishops.

In a letter written in his native Spanish, Francis told the 67-year-old German that he should stay in his office and help guide the church through the shoals.

Marx has never been publicly accused of perpetrating or covering up abuse. He has endowed a foundation aimed at helping abuse victims reconcile with the church, giving more than $600,000 of his own money saved up over his decades as a priest.

In his original letter, which Marx has said he spent months reflecting on before sending it to the Vatican on May 21, he wrote that, "It is important to me to share the responsibility for the catastrophe of the sexual abuse by church officials over the past decades."

RIO DE JANEIRO -- The U.S. ambassador known for friendly ties with Brazilian President Jair Bolsonaro has tendered his resignation and is leaving the diplomatic service, he said in a statement on Thursday.

Ambassador Todd Chapman said that he wrote to President Joe Biden on Wednesday to inform him of his decision and that he would be moving to Denver to be near his children and pursue other professional opportunities.

His appointment in October 2019 was made as Bolsonaro was projecting ideological alignment with the U.S. and then-President Donald Trump.

His access built on friendly relations raised concerns he was perhaps drawing too close to Bolsonaro. One person who spoke to The Associated Press on condition of anonymity last year confirmed media reports that Chapman suggested Brazil could influence Iowa's vote in the U.S. presidential election by lifting ethanol tariffs.

Chapman was deputy chief of mission at the U.S. Embassy in Brasilia from 2011 to 2014 and U.S. ambassador to Ecuador before that. In a diplomatic career spanning three decades, he has been posted to Afghanistan, Nigeria and Taiwan. The Texas native highlighted in his statement that he had served under three Democratic and three Republican presidents.

PESHAWAR, Pakistan -- Pakistani police have arrested a cleric after a video of him was seen widely on social media in which he threatens Nobel laureate Malala Yousafzai over her recent comments about marriage, officials said Thursday.

In the video, the cleric threatens to target Yousafzai with a suicide attack when she returns to Pakistan, allegedly because of her comments earlier this month to British Vogue magazine about marriage that he claims insulted Islam.

Yousafzai has been living in Britain since 2012, after the Pakistani Taliban shot and seriously wounded her. She was 15 years old at the time.

At one point in the Vogue interview, Yousafzai said: "I still don't understand why people have to get married. If you want to have a person in your life, why do you have to sign marriage papers, why can't it just be a partnership?"

The remark caused a stir on social media in Pakistan and angered Islamists and clerics like Haqqani. Under Islamic laws, couples cannot live together outside marriage.

Yousafzai, now 23, was awarded the Nobel Peace Prize in 2014 for working to protect children from slavery, extremism, and child labor. 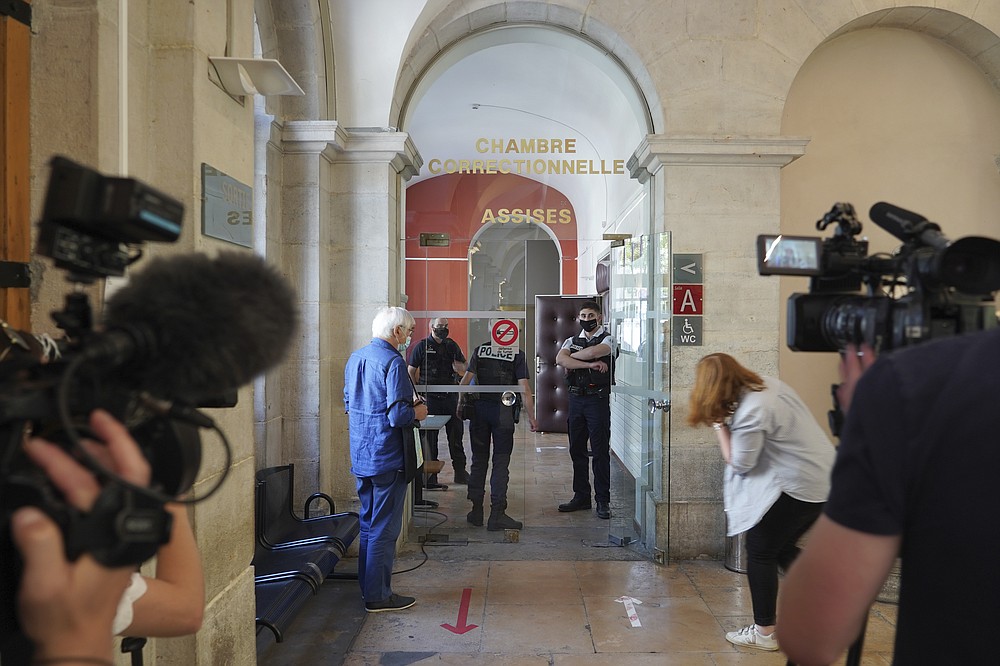 Reporters wait outside the courtroom as the 28-year-old man who slapped French President Emmanuel Macron is tried, facing possible jail time and a fine if found guilty of assaulting a public official, Thursday, June 10, 2021 in Valence, central France. Damien Tarel was quickly arrested after the swipe Tuesday that caught Macron in the face with an audible thwack as the French leader was greeting a crowd in southeast France. (AP Photo/Laurent Cirpriani) 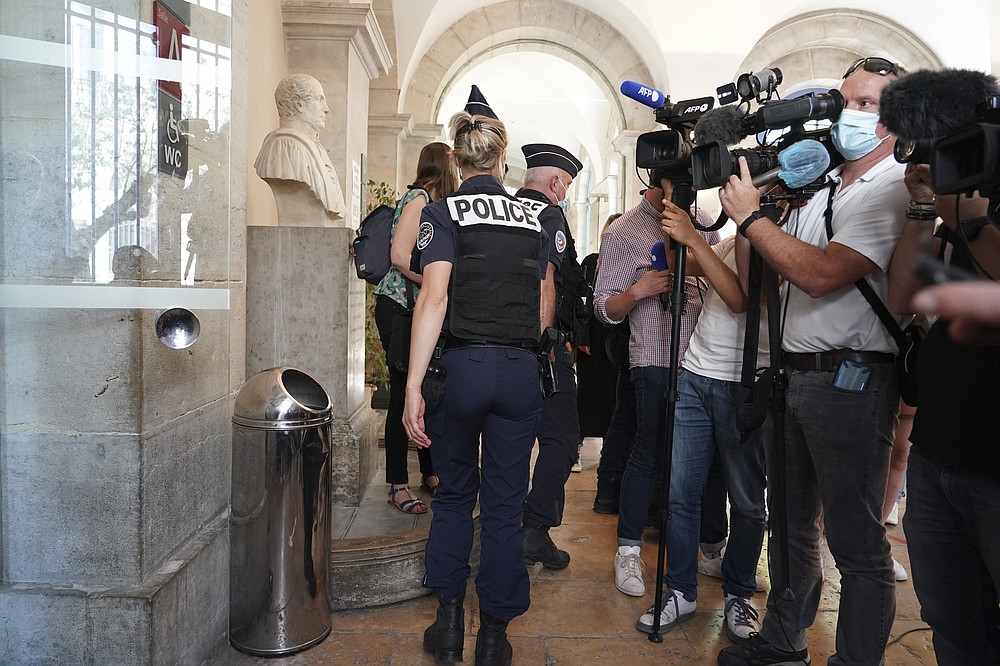 Police officers leave the courtroom as the man who slapped French President Emmanuel Macron is tried, Thursday, June 10, 2021 in Valence, central France. The 28-year-old Frenchman who described himself as a right-wing or extreme-right "patriot" was sentenced to four months in prison Thursday for slapping President Emmanuel Macron in the face. (AP Photo/Laurent Cirpriani)
ADVERTISEMENT