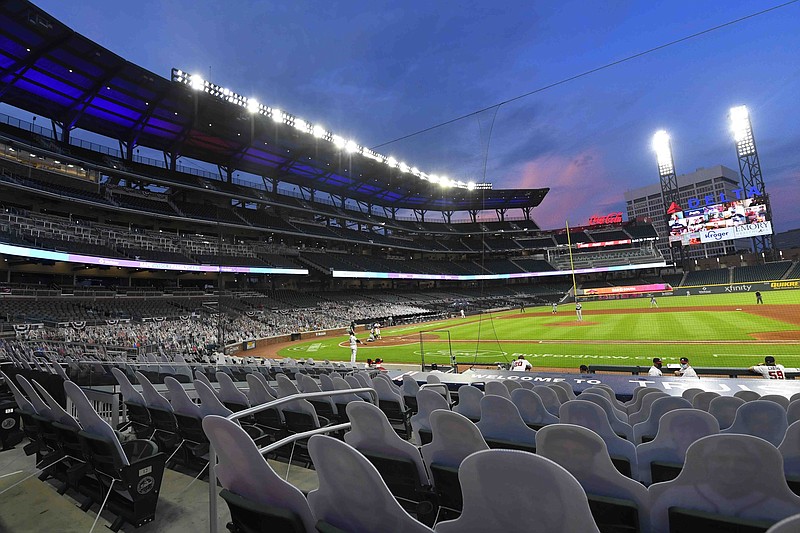 FILE - This photo from Thursday July 30, 2020, shows cardboard cutouts of fans in seats during a baseball game between the Atlanta Braves and Tampa Bay Rays at Truist Park stadium in Atlanta, Georgia. A Manhattan judge has rejected an attempt to force Major League Baseball to return next month's All-Star Game to Atlanta, after it was moved to Denver after Georgia Republicans enacted a restrictive new voting law. (AP Photo/John Amis, File)

Jake Bauers ran out of chances with the Indians. The Mariners are giving him another one. Less than a week after Cleveland designated the first baseman/outfielder for assignment, Bauers was traded Thursday to Seattle for a player to be named or cash. Bauers, who never produced offensively the way the Indians needed, immediately went into the Mariners' starting lineup for a day game in Detroit. He went 1 for 4 with an RBI in his debut, but Seattle lost 8-3 and have dropped six of nine. Bauers, 25, will be back in Cleveland today when the Mariners open a three-game series.

The Arizona Diamondbacks fired hitting coach Darnell Coles and assistant hitting coach Eric Hinske (Arkansas Razorbacks) on Thursday with the team struggling to score runs during a brutal stretch in which it has lost 30 of 35 games. The Diamondbacks named co-hitting coaches to replace them. Rick Short was promoted from Class AAA Reno and Drew Hedman was Arizona's run production coordinator. Arizona has a majors-worst 20-43 record. The D-backs have lost a franchise record 19 consecutive road games. The D-backs are batting .231 as a team and scored just 12 runs over their most recent six-game trip.

A Manhattan judge on Thursday rejected an attempt to force Major League Baseball to return next month's All-Star Game to Atlanta. U.S. District Judge Valerie E. Carponi ruled against a not-for-profit organization representing small businesses, saying a lawsuit had failed to provide proof that its members have suffered any injuries by the decision to move the game. The lawsuit filed May 31 alleged that Major League Baseball acted unconstitutionally when it moved the game from the Atlanta Braves stadium to Denver after Georgia Republicans enacted a restrictive new voting law.

Dustin Johnson got off to a fast start Thursday in his home-state Palmetto Championship, shooting a 6-under 65 that left him a shot behind leader Wes Roach. Johnson, the world's top-ranked player and a South Carolina native, hadn't played since missing the cut the last time he teed it up in the Palmetto State at the PGA Championship on Kiawah Island last month. Johnson appeared he might hold a share of the lead before Roach, a 32-year-old seeking his first PGA Tour victory, rolled in a 19-footer for a go-ahead birdie on the 16th hole. Roach, splitting time on the PGA and Korn Ferry tours this season, shot his lowest PGA Tour round since November 2019. He was a stroke in front of Johnson, Doc Redman, Chesson Hadley and South Africa's Erik van Rooyen. Roach eagled the par-5 fourth, holing out from 105 yards on the 633-yard hole. Austin Cook (Jonesboro, Arkansas Razorbacks) shot a 1-under 70. Sebastian Cappelen (Razorbacks) turned in an even-par 71. David Lingmerth (Razorbacks) fired a 5-over 76.

Miller in front at Korn Ferry

Irish rookie Leona Maguire shot a 7-under 65 on Thursday at Lake Merced to take the first-round lead in the LPGA Mediheal Championship, the tour's second consecutive event on the San Francisco Peninsula. Lexi Thompson followed her Sunday back-nine meltdown in the U.S. Women's Open at nearby Olympic Club with a 71, while Michele Wie West rallied for a 73. Off last week off after failing to qualify for the Women's Open, Maguire had nine birdies and two bogeys. The 26-year-old former Duke star matched the tournament record in the third playing of the event, missing a chance to break it when she closed with a bogey on the par-5 ninth. Jasmine Suwannapura of Thailand shot a 66, birdieing the par-5 18th late in the afternoon to pull within one. Maria Fassi (Razorbacks) shot a 7-over 79 and Alana Uriell (Razorbacks) shot a 9-over 81.

Sam Mewis scored in the 76th minute and the U.S. national team beat Portugal 1-0 in the Summer Series on Thursday night in Houston. The U.S. women are undefeated in 40 consecutive matches, the third longest streak in team history. The team is undefeated in 54 games on American soil. The Americans were surprisingly scoreless until Mewis broke through with her header. It was her 22nd international goal. Carli Lloyd appeared to score a short time later on a rebound off a free kick but it was ruled offside. The United States has faced Portugal nine previous times, winning all of the meetings.

Alex Pietrangelo scored his first goal of the postseason to break a tie late in the second period, and the Vegas Golden Knights defeated the Colorado Avalanche 6-3 in Game 6 of their second-round series on Thursday night to advance to the Stanley Cup semifinals. Nick Holden, William Karlsson, Keegan Kolesar, William Carrier, and Max Pacioretty also scored for Vegas, which won four in a row in the series and will next face the Montreal Canadiens. The Golden Knights are in NHL's final four for the third time in the franchise's four years. Marc-Andre Fleury stopped 30 shots and moved into sole possession of fourth place all-time with 89 playoff wins. Devin Toews, Mikko Rantanen, and Andre Burakovsky scored for Colorado.

Green Bay Packers reserve tight end Jace Sternberger has been suspended without pay for the first two games of the season for violating the NFL's substance abuse policy. The decision by the league on Thursday means Sternberger will miss the Packers' Sept. 12 opener at New Orleans and Sept. 20 home game against Detroit. He will be eligible to return to the active roster Sept. 21, and he could play as early as Sept. 26 at San Francisco. Sternberger remains eligible to participate in preseason games, as well as all practices. Sternberger, a 2019 third-round pick from Texas A&M, dealt with injuries in each of his first two seasons. He spent the first half of his rookie year on injured reserve with an ankle injury and missed four games with a concussion last season. Sternberger, who turns 25 on June 26, had 12 catches for 114 yards and a touchdown in 12 games last season.

Chicago Bulls guard Coby White had surgery Thursday on his left shoulder after injuring it over the weekend. The team said White was hurt "while engaged in basketball activities away from the team" and will be reevaluated in four months, throwing into question his status for training camp and the season opener. White averaged 15.1 points and 4.8 assists while starting 54 of the 69 games he played in last season -- his second in the NBA. He started his final 18 games and averaged 17.6 points and 5.9 assists while making about 40% of his three-pointers.

No. 2 seed ousted at Stuttgart

Swiss teenager Dominic Stricker stunned the second-seeded Hubert Hurkacz 7-6 (5), 7-6 (5) Thursday to reach the quarterfinals of the Stuttgart Open. The 18-year-old Stricker, who is ranked 335th, once again showed his composure in the tiebreakers a day after beating Radu Albot 7-6 (4), 7-6 (5) on his grass-court debut. Stricker hit eight aces and saved five of the six break points he faced against Hurkacz to set up a meeting with Sam Querrey. The American defeated Australian qualifier James Duckworth 6-4, 7-6 (7). Stricker was ranked No. 1,168 at the start of the season but is climbing rapidly. 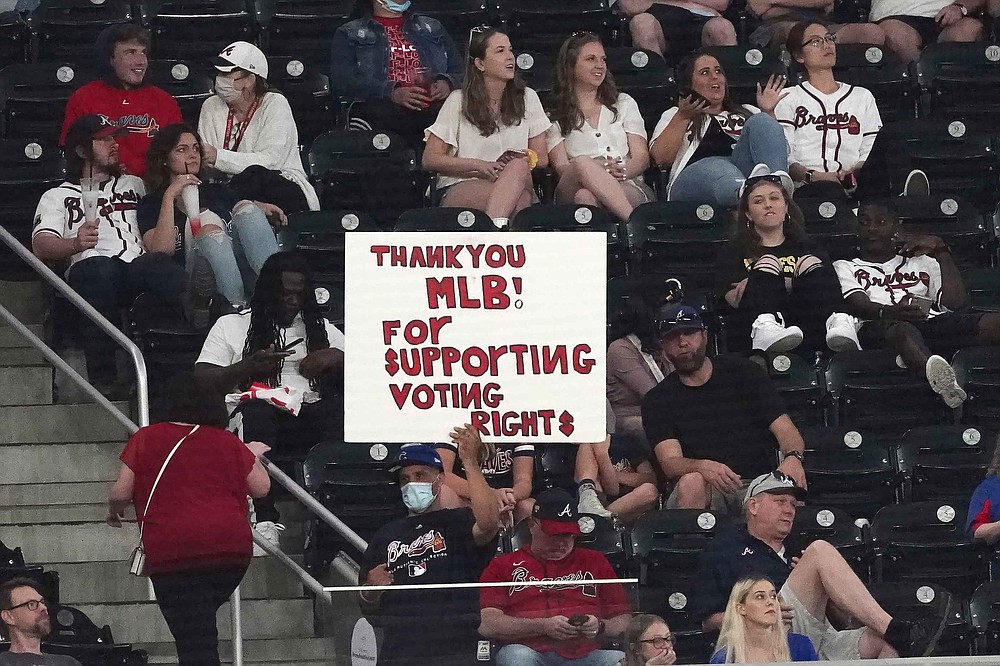 FILE - This photo from Monday April 26, 2021, shows a fan holding a sign supporting Major League Baseball's decision to move the All Star Game from Atlanta, during a baseball game between theChicago Cubs and the Atlanta Braves in Atlanta, Georgia. A Manhattan judge has rejected an attempt to force Major League Baseball to return next month's All-Star Game to Atlanta, after it was moved to Denver after Georgia Republicans enacted a restrictive new voting law. (AP Photo/John Bazemore, File). 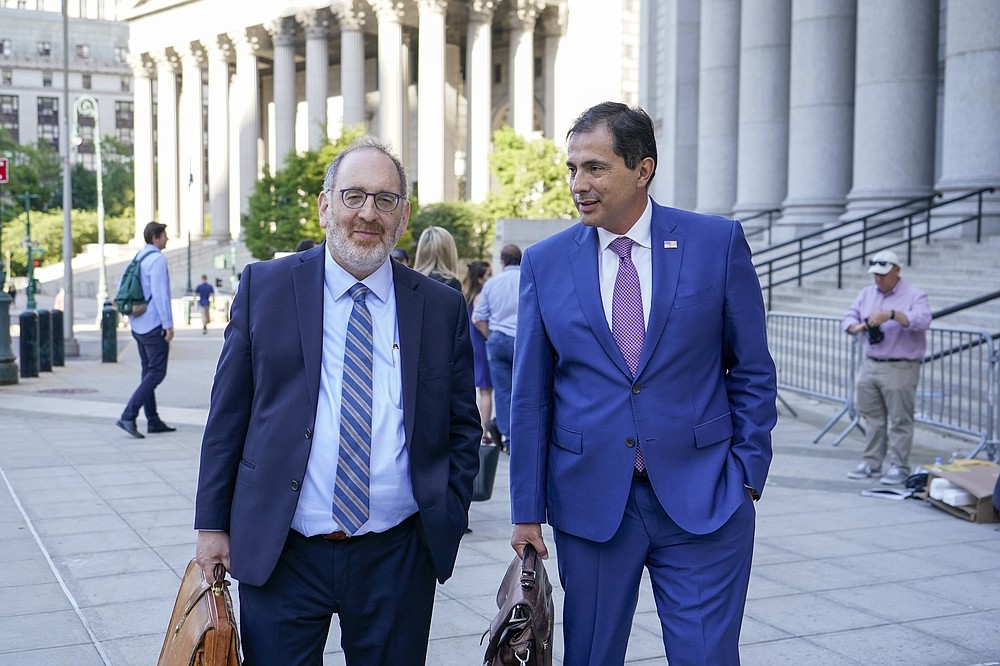 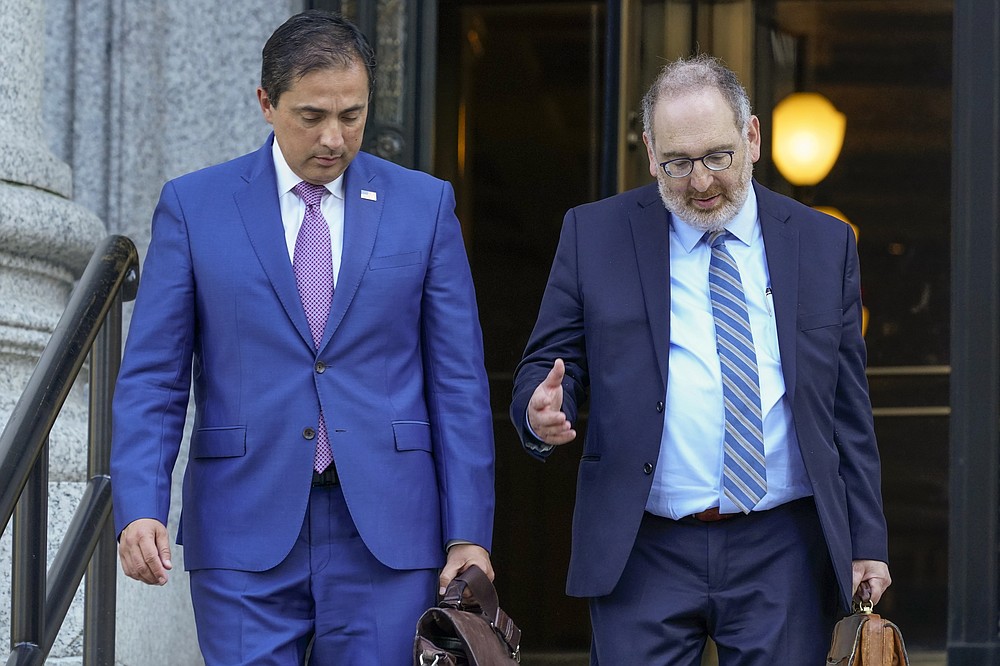 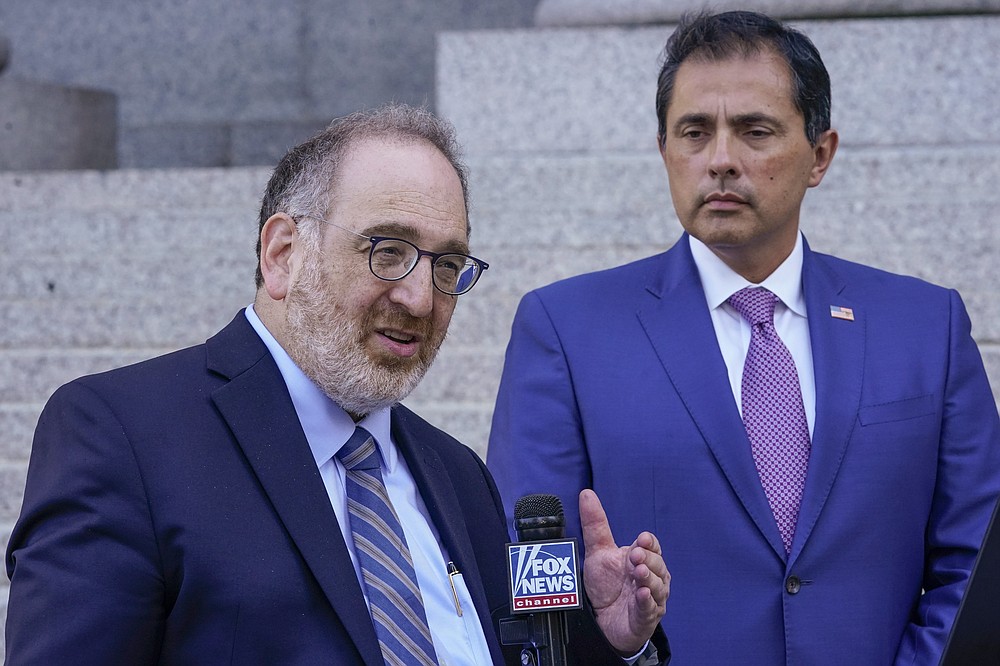