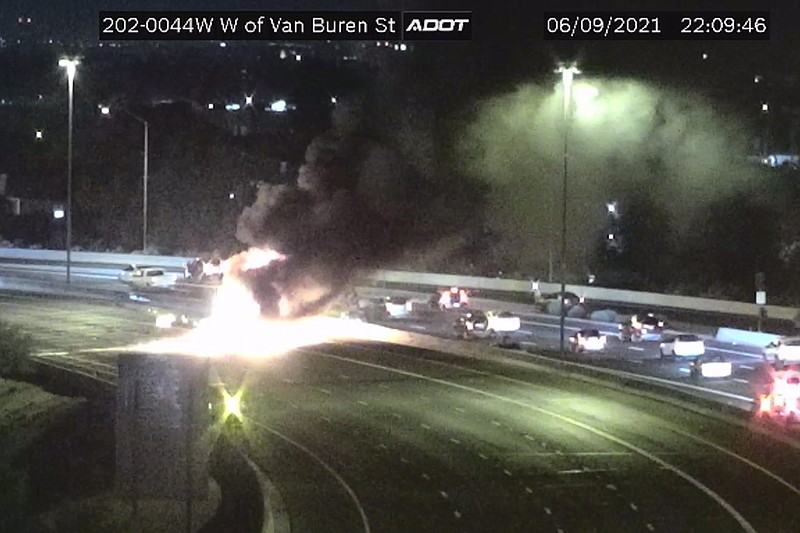 PHOENIX — Federal safety officials said Thursday that they will investigate a crash in which authorities said a milk tanker going too fast collided with seven passenger vehicles on a Phoenix freeway, killing four people and injuring at least nine.

The wreck occurred late Wednesday after the tanker “failed to slow for traffic congestion,” the Arizona Department of Public Safety said in a statement.

The National Transportation Safety Board said it was sending nine investigators to conduct a safety probe into the crash in cooperation with the Arizona public safety department.

Six of the nine people injured in the crash were taken to hospitals in critical condition, the Phoenix Fire Department said.

Authorities ruled out the possibility that the trucker was impaired, the public safety department said. The trucker was not identified.

WASHINGTON — The FBI’s director told lawmakers Thursday that the bureau discourages ransomware payments to hacking groups even as major companies in the past month have participated in multimillion-dollar transactions aimed at getting their systems back online.

“It is our policy, it is our guidance, from the FBI, that companies should not pay the ransom for a number of reasons,” Christopher Wray testified under questioning from members of the House Judiciary Committee.

Besides the fact that such payments can encourage additional cyberattacks, victims may not automatically get back their data despite forking over millions, “and that’s not unknown to happen,” Wray said.

In ransomware attacks, hackers lock up and encrypt a victim’s data and demand a payment in order to return it. They have proliferated in scale over the past year, targeting not just hospitals and police agencies but also critical infrastructure and vital industries. Some recent major corporate targets have responded by paying the ransom, fearing that a prolonged shutdown of their businesses could have catastrophic consequences for the country and disrupt crucial supply chains.

“There are a whole bunch of things we can do to prevent this activity from occurring, whether they pay the ransom or not, if they communicate and coordinate and work closely with law enforcement right out of the gate,” he said. “That’s I think the most important part.”

ALBUQUERQUE, N.M. — A key reservoir on the Colorado River has dipped to its record low in the latest showing of the drought’s grip on the region.

[Video not showing up above? Click here to watch » https://www.youtube.com/watch?v=_TK41kBv2Hc]

The surface elevation of Lake Mead along the Nevada-Arizona border dipped below 1,072 feet Wednesday night — the lowest level since it was filled in the 1930s, according to the U.S. Bureau of Reclamation.

“We’re expecting the reservoir to keep declining until November, then it should start to rebound,” said U.S. Bureau of Reclamation spokeswoman Patti Aaron.

The water level affects the recreation industry at what is one of the largest man-made reservoirs in the country and the efficiency of hydropower generation at Hoover Dam.

It won’t be used to determine next year’s water deliveries to Arizona, California and Nevada until August when the bureau issues an official projection. But the agency has said it expects to declare the first-ever shortage that prompts cuts in Arizona and Nevada.

“People are certainly concerned,” Aaron said. “You look at the reservoir, and it’s concerning.” Lake Mead levels ebb and flow throughout the year depending on weather patterns and how much water is consumed or evaporates. States, water districts and tribes have propped up the lake over the years through various agreements to keep it from falling to a point where it could not deliver water downstream.

A gunman shot and killed a toddler and his grandmother before fatally shooting himself in a Publix grocery store in Palm Beach County, Fla., on Thursday morning, authorities said.

Deputies from the Palm Beach County sheriff’s office found their bodies near the produce section when they entered the store in Royal Palm Beach, about 12 miles west of Palm Beach, just before 11:40 a.m., a spokesperson said.

The names of the victims and the gunman were not immediately released. The child, a boy, would have turned 2 later this month, said Teri Barbera, the sheriff’s spokesperson.

“We don’t have any idea who the male is at this time,” Barbera said, referring to the gunman.

Later Thursday, authorities said there was no known relationship between the gunman and the two victims. A motive for the shooting had not been determined.

Investigators were reviewing security video from the store and talking to witnesses, she said.

“What we are doing now is documenting the scene,” Barbera said. “We’re trying to determine what led up to the shooting.”