Trip a curiosity as reports arise that Venezuela is destination by Compiled Democrat-Gazette Staff From Wire Reports | June 11, 2021 at 4:04 a.m. 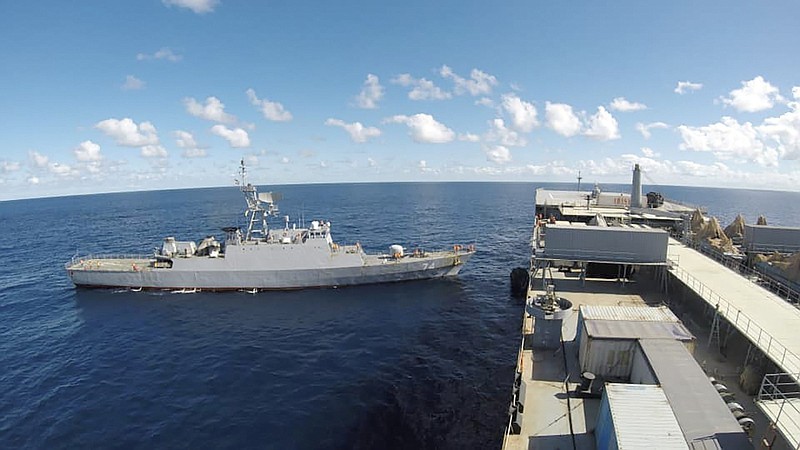 The trip by the new domestically built destroyer Sahand and the intelligence-gathering vessel Makran occurs as U.S. media reports, citing anonymous American officials, said the ships were bound for Venezuela. The Associated Press could not immediately confirm the ships' destination.

The vessels departed from Iran's southern port of Bandar Abbas, said Adm. Habibollah Sayyari, Iran's deputy army chief. He described their mission as the Iranian navy's longest and most challenging voyage yet, without elaborating.

Iranian state TV released a short clip of the destroyer cruising through the Atlantic's rough seas. The video likely was shot from the Makran, a converted commercial oil tanker with a mobile launch platform for helicopters.

Images from Maxar Technologies dated April 28 appear to show seven Iranian fast-attack craft typically associated with its paramilitary Revolutionary Guard on the deck of the Makran. Satellite images from Planet Labs Inc. suggest it left a port at Bandar Abbas sometime after April 29. It wasn't immediately clear where the Makran and the destroyer are now.

In Washington, U.S. State Department spokesman Ned Price would not speculate on what the vessels were carrying, saying only "that if this is an effort to transfer weapons or otherwise to violate its international obligations we would be prepared to respond."

The website Politico first reported in late May, citing anonymous officials, that the ships' final destination may be Venezuela. A top aide to Venezuelan President Nicolas Maduro has denied reports that the ships will dock there. The official spoke on the condition of anonymity to discuss sensitive geopolitical issues.

During a news conference May 31, Iranian Foreign Ministry spokesman Saeed Khatibzadeh declined to say where the Makran was going.

The fast-attack craft aboard the Makran are the type that the Guard uses in its tense encounters with U.S. warships in the Persian Gulf and its narrow mouth, the Strait of Hormuz. It's not immediately clear what Venezuela's plans would be for those ships.

"If the boats are delivered, they may form the core of an asymmetrical warfare force within Venezuela's armed forces," the U.S. Naval Institute said in an earlier published analysis. "This could be focused on disrupting shipping as a means of countering superior naval forces. Shipping routes to and from the Panama Canal are near the Venezuelan coast."

Meanwhile, the European Union and U.S. said they are deeply concerned about Iran's failure to clarify the source of nuclear material found at several undeclared facilities, and they urged Tehran to fully cooperate with the International Atomic Energy Agency.

The rebuke could shadow a sixth round of talks aimed at restoring the 2015 nuclear deal that limited Iran's atomic activity set to start soon in Vienna.

Iran's obligations under its safeguards agreement with the agency are separate from the extra monitoring measures set out by its nuclear pact with world powers.

The Vienna agency repeated this month that it has questions over the correctness and completeness of Iran's declarations after investigators found decades-old man-made uranium particles at sites suspected of hosting nuclear activities.

Allowing the investigation to stall "would both undermine the integrity of the international safeguards system and set a troubling precedent for international efforts to ensure that Iran is adhering to all of its nonproliferation commitments," U.S. envoy Louis Bono said in a statement delivered Thursday to the agency's board of governors.

Iran's envoy, Kazem Gharibabadi, replied in his statement that while his government stands ready to work with investigators, they don't consider the agency's findings "consistent, credible or convincing."

Information for this article was contributed by Isabel Debre, Jon Gambrell, Amir Vahdat, Matthew Lee and Joshua Goodman of The Associated Press; and by Jonathan Tirone and Golnar Motevalli of Bloomberg News (WPNS). 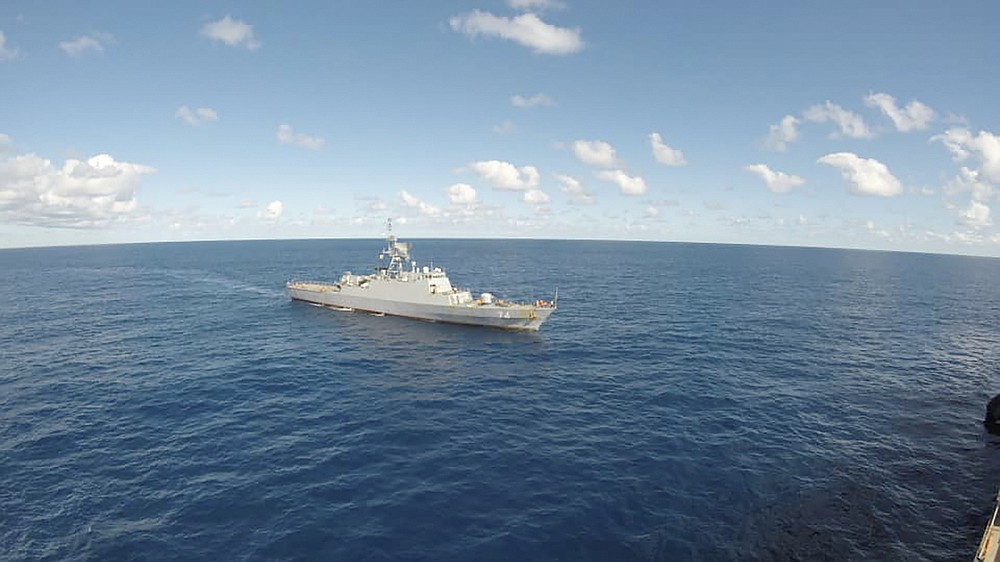 In this photo released Thursday, June 10, 2021, by the Iranian army, an Iranian warship moves in the Atlantic Ocean. Iran has dispatched two warships to the Atlantic Ocean, a rare mission to demonstrate the country's maritime power, state TV reported Thursday, without specifying the vessels' final destination. (Iranian Army via AP) 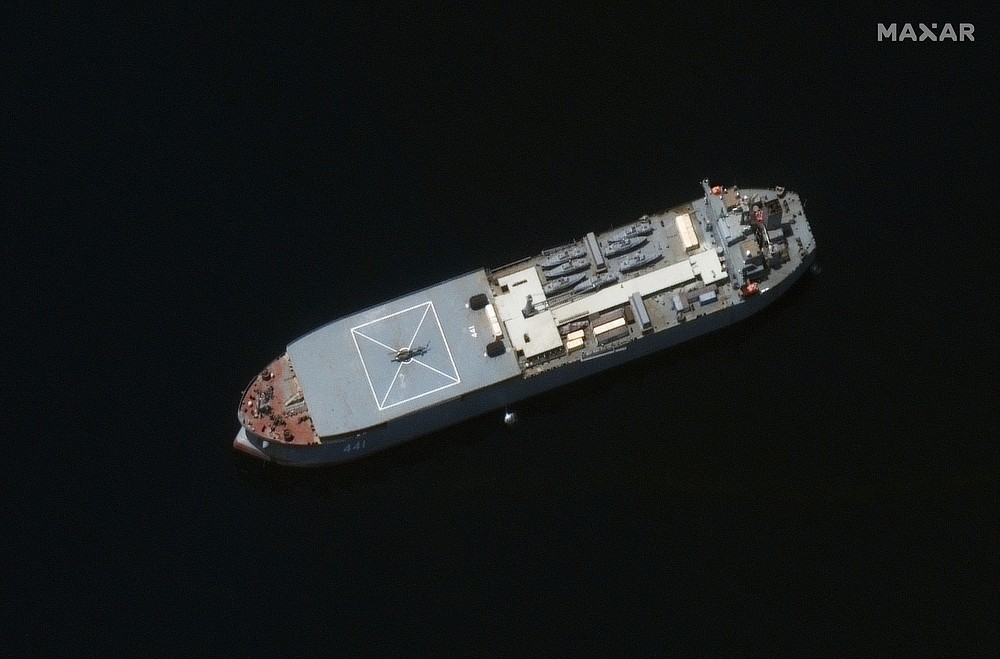 In this satellite photo provided by Maxar Technologies, the Iranian navy vessel Makran is seen off Lark Island, Iran, May 10, 2021. An Iranian destroyer and support vessel are now sailing in the Atlantic Ocean in a rare mission far from the Islamic Republic, Iran's state TV reported on Thursday, June 10, 2021, without offering the vessels' final destination. (©2021 Maxar Technologies via AP) 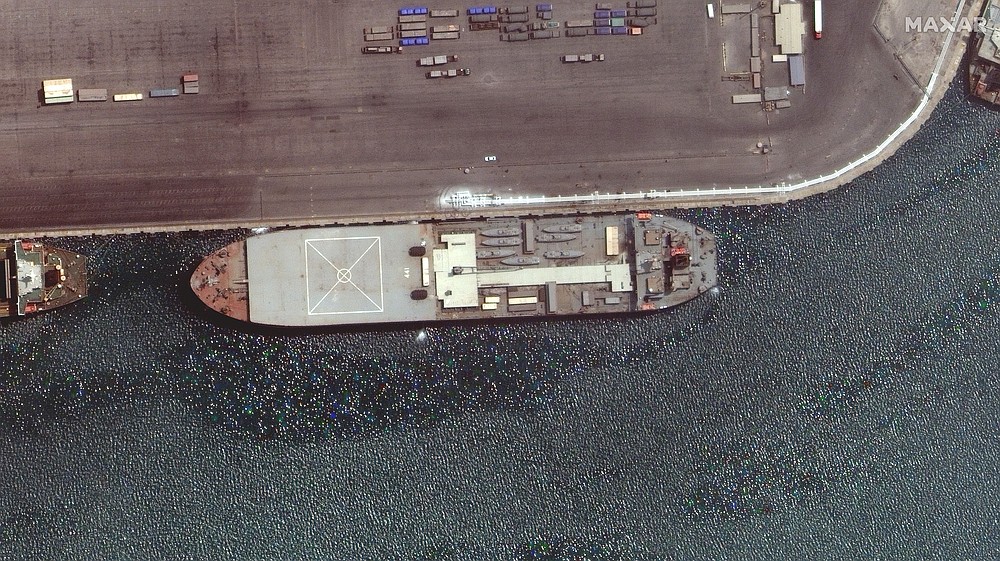 In this satellite photo provided by Maxar Technologies, the Iranian navy vessel Makran is seen at port at Bandar Abbas, Iran, April 28, 2021. An Iranian destroyer and support vessel are now sailing in the Atlantic Ocean in a rare mission far from the Islamic Republic, Iran's state TV reported on Thursday, June 10, 2021, without offering the vessels' final destination. (©2021 Maxar Technologies via AP)
ADVERTISEMENT