Group warns of aid loss in Syria if route cut off 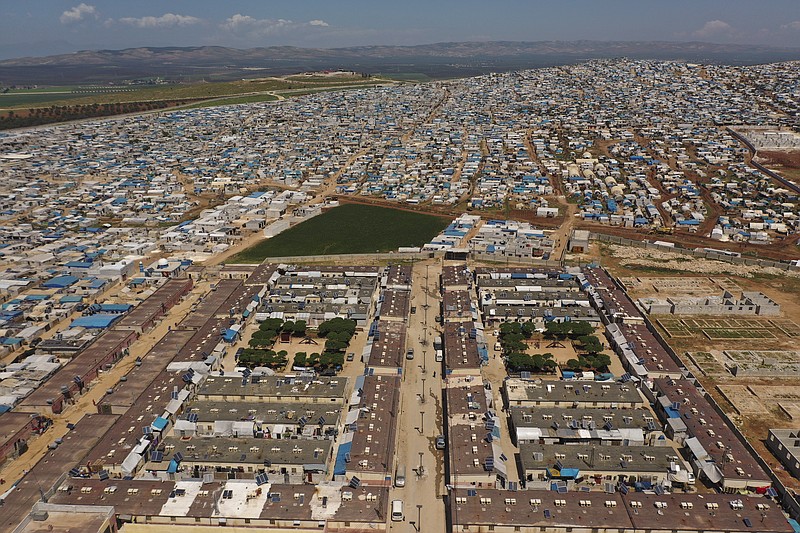 FILE - In this April 19, 2020 file photo, shows a large refugee camp on the Syrian side of the border with Turkey, near the town of Atma, in Idlib province, Syria. Millions of Syrians risk losing access to lifesaving aid, including food and COVID-19 vaccines if Russia gets its way at the Security Council by blocking the use of the last remaining cross-border aid corridor into northwestern Syria, an international rights group said Thursday, June 10, 2021. (AP Photo/Ghaith Alsayed, File)

BEIRUT -- A leading rights group warned Thursday that millions of Syrians risk losing access to lifesaving aid, including food and covid-19 vaccines, if Russia manages to block at the U.N. Security Council the use of the last remaining cross-border corridor for U.N. aid into rebel-held northwestern Syria.

The warning was issued as activists and rescuers said Syrian government shelling of several northwestern villages killed at least 11 people and sent hundreds fleeing on Thursday.

The onslaught is part of an apparent escalation of Syrian military operations in the rebel-held enclave. The northwest is home to nearly 4 million people, most of them displaced and living in shelters, dependent on U.N. aid.

The U.N. Security Council mandate for humanitarian aid deliveries from Turkey to Syria's opposition-held region expires July 10. Veto-wielding Russia, Damascus' close ally, has been pressing for the closure of the last remaining aid crossing corridor into the area, insisting the Syrian government should control all assistance going into the country -- even to areas outside its control.

The New York-based Human Rights Watch said that closing Bab al-Hawa border crossing with Turkey for U.N. aid threatens to totally shut down humanitarian operations most of the area's residents depend on.

In its report, Human Rights Watch said U.N. agencies no longer will have authorization to procure supplies or carry out or finance others' aid work, particularly during emergencies such as the ongoing military campaign in Idlib, Syria, or waves of displacement. The U.N., for instance, pays the salaries of 800 doctors and 2,000 nurses there.

A new "humanitarian calamity" will be unleashed on the northwest if Security Council members fail to renew the mandate for aid deliveries, Human Rights Watch said. At least 75% of the people there depend on aid to meet their basic needs.

"If Russia shuts down those trucks, there won't be any way of getting food to those people and they won't have food," said Gerry Simpson, associated crisis and conflict director at Human Rights Watch.

Simpson added that if the corridor is shut, it is "unclear how and whether any further vaccines would reach the area." The United States, the U.N and other European countries are campaigning for the crossing to remain open for at least another year.

Syria's civil war has left the country divided, much of its prewar population displaced and its infrastructure in ruins. Nearly half a million people have been killed while tens of thousands have disappeared.

Last year, and with threats of a Russian veto, the Security Council officially closed three border crossings into Syria -- from Iraq, Jordan and Turkey. It forced 19 out of 50 U.N.-supported health centers to shut while authorities struggled to meet essential needs to fight the pandemic.

Sara Kayyali, Syria researcher with Human Rights Watch, said if Russia vetoes the resolution to extend the use of Bab al-Hawa, that risks sidelining the U.N. in coordinating humanitarian and emergency responses.

Thursday's shelling hit Ablin village in Idlib where opposition fighters and militants still hold territory. Rescue workers, known as White Helmets who operate in opposition-held areas, said a child and at least 10 other civilians were among those killed.

Turkey and Russia, who support rival parties in Syria's 10-year conflict, had reached a cease-fire deal in March 2020 that stopped a Russia-backed government offensive on Idlib. But military operations have not totally ceased, with limited violence breaking out occasionally as government forces try to make piecemeal advances in the enclave dominated by the al-Qaida-linked militant group, Hayat Tahrir al-Sham.

Mark Cutts, the U.N.'s deputy regional humanitarian coordinator for Syria, tweeted his condemnation Wednesday of what he called the "big escalation in artillery shelling by Syrian government forces in southern Idlib." He said the shelling has caused civilian casualties and hit near a camp for displaced people, destroying a compound used as a school. 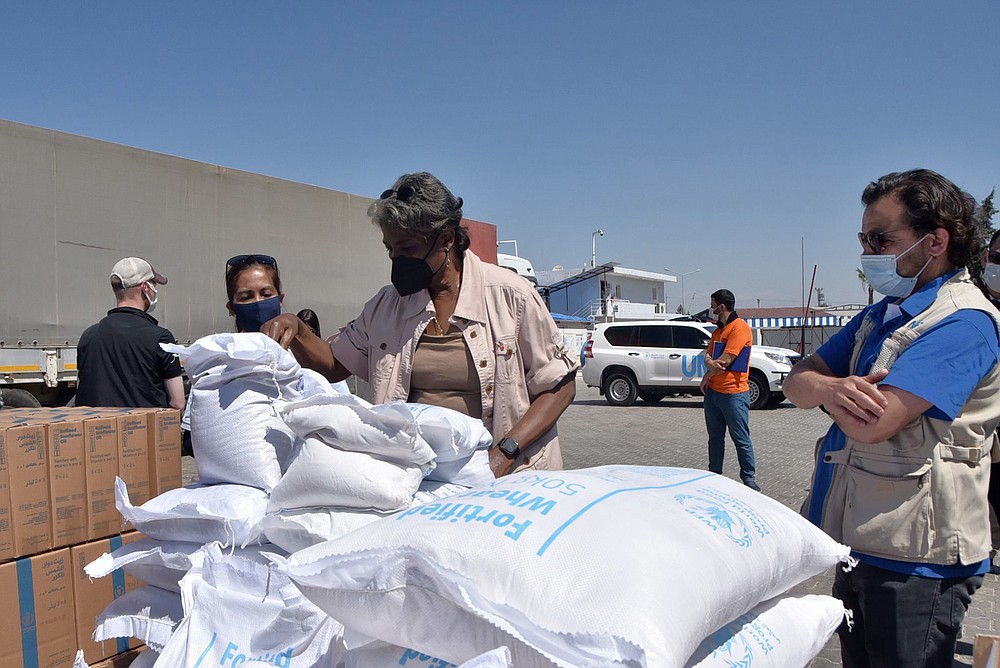 FILE - In this June 3, 2021 handout file photo provided by the US Embassy in Turkey, Linda Thomas-Greenfield, U.S. Ambassador to the United Nations, examines aid materials at the Bab al-Hawa border crossing between Turkey and Syria. Millions of Syrians risk losing access to lifesaving aid, including food and COVID-19 vaccines if Russia gets its way at the Security Council by blocking the use of the last remaining cross-border aid corridor into northwestern Syria, an international rights group said Thursday, June 10. (US Embassy in Turkey via AP)
ADVERTISEMENT