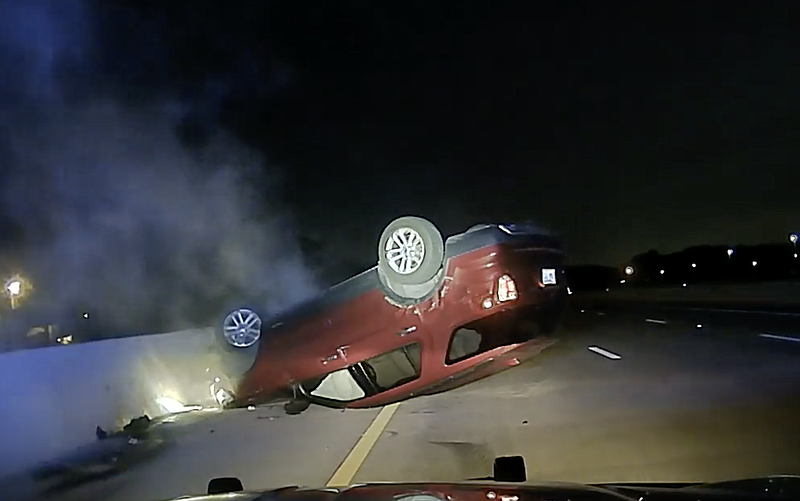 A Pulaski County woman has sued the Arkansas State Police for "negligently" using a maneuver that caused her sport utility vehicle to crash into a concrete barrier along U.S. 167 near Jacksonville last year, according to the lawsuit.

Janice Nicole Harper, who was pregnant at the time, suffered "severe bodily injuries" in the crash, which caused her vehicle to flip upside-down, according to the lawsuit, which was filed last month in Pulaski County Circuit Court.

On July 9, Harper was driving south in the middle lane of U.S. 167, according to the lawsuit filed by Andrew Norwood, a Little Rock attorney.

State police trooper Rodney K. Dunn clocked Harper driving 84 miles per hour in a 70-mile-per-hour zone, according to the lawsuit.

He activated emergency lights and pursued Harper's vehicle. Within four seconds, Harper turned on her blinker, dropped her speed to about 60 miles per hour and moved to the right lane.

[Video not showing up above? Click here to watch » https://www.youtube.com/watch?v=LkTRXTbDIr0]

"Plaintiff was unable to safely stop her vehicle on the right or left shoulder due to concrete barriers and a reduced shoulder being on both sides of the road; therefore, leaving the plaintiff with no room to safely pull over her car," according to the lawsuit.

Within 15 seconds of Dunn turning on his blue lights, Harper activated her vehicle’s emergency flashers to indicate she "was seeking a safe place to stop her vehicle," according to the lawsuit.

"There were no exits or shoulder for plaintiff to safely exit the highway," wrote Norwood.

According to the lawsuit, Dunn executed a "pursuit intervention technique," also known as a PIT maneuver, on Harper's vehicle. That was two minutes and seven seconds after Dunn initiated his blue lights, according to the suit.

A PIT maneuver involves an officer using the front of his car to push the back of another vehicle to one side, causing it to turn sideways and in theory come to a stop.

Harper had slowed to well below the speed limit, turned on her vehicle’s emergency flashers and was looking for a safe spot to park her vehicle, according to the lawsuit.

"For this, defendant Dunn executed a negligently performed PIT maneuver which flipped the plaintiff’s vehicle and placed her life and the life of her unborn child at risk," wrote Norwood.

Harper is requesting a jury trial.

"Plaintiff brings this negligence and intentional tort lawsuit under Arkansas law, seeking to be made whole and recover compensatory, actual, consequential, special and all other damages permitted by law," wrote Norwood.

Defendants in the case are Dunn; his supervisor, Alan C. Johnson; Col. William J. Bryant, director of the state police; and 10 John Does.

The John Does are individuals, companies or entities who "were responsible for coming up with the policy, procedure, and/or criteria for the PIT maneuver used by defendant Dunn on July 9, 2020."

According to the "Arkansas Driver's License Study Guide," if motorists see blue lights behind them, they should "pull over to the right side of the road – activate your turn signal or emergency flashers to indicate to the officer that you are seeking a safe place to stop."

Because of the pending lawsuit, state police cannot comment, according to a statement from Bill Sadler, a spokesman.

"Meanwhile, the Arkansas State Police continues to instruct and train state troopers in comprehensive emergency vehicle operation training, which includes the approved procedures in the use of PIT," according to the statement.

The ACLU of Arkansas is calling on state legislators to investigate PIT maneuvers, according to a news release on Friday.

“These deadly maneuvers are a reminder that police are routinely escalating mere traffic violations into dangerous situations that endanger the lives of all motorists," said Holly Dickson, executive director of the ACLU of Arkansas. "The Arkansas General Assembly must scrutinize the unnecessary and excessive use of traffic maneuvers like PIT. Nicole Harper was forced into a horrific and life-threatening crash by a police officer and the senseless risk to her life and the lives of others should concern every Arkansan. Incidents like these also demonstrate the need for a statewide oversight board to investigate police misconduct and abuse, and a fundamental re-imagining of the role of police in our communities. What we’re seeing on this video is not safety – it's deadly force and reckless endangerment – and it needs to stop.”

This story was originally published at 12:30 p.m.