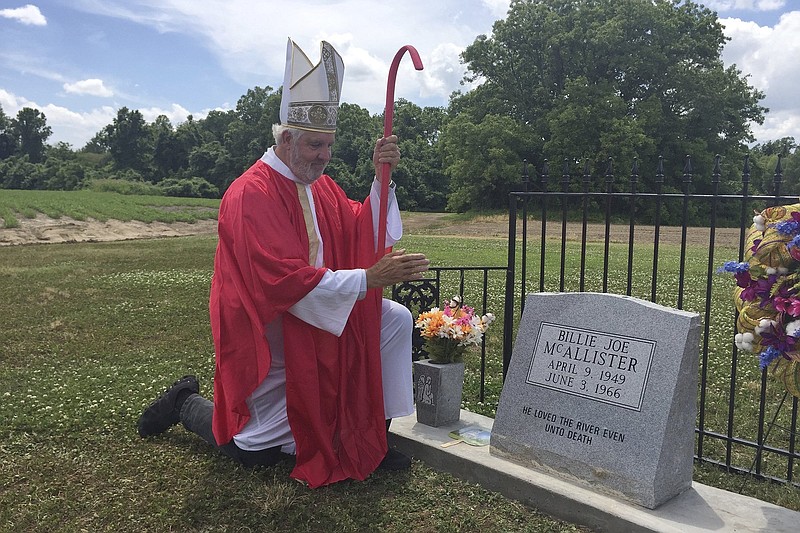 Bill Luckett of Clarksdale, Miss., appearing as a pope, kneels beside the monument for the fictional Billy Joe McAllister made famous by former Greenwood resident Bobbie Gentry’s song “Ode to Billy Joe,” at Tallahatchie Flats near Greenwood, Miss. (Susan Montgomery/The Commonwealth via AP)

GREENWOOD, Miss. — A group of Mississippi residents gathered on a sleepy, dusty Delta day to remember the fictional Billy Joe McAllister where — as the 1967 hit song had it — he ended his life when he jumped off the Tallahatchie bridge.

The Greenwood Commonwealth reported that members of the society calling themselves the June Bugs held a ceremony June 3 and talked about Billy Joe as if they knew him. The group included Republican U.S. Sen. Roger Wicker and Bill Luckett, a lawyer and blues club owner who once ran for Mississippi governor as a Democrat.

They unveiled a tombstone at a spot called the Tallahatchie Flats.

"Ode to Billy Joe" was written and recorded by Bobbie Gentry, who lived part of her life in Greenwood.

Wicker quoted from the lyrics, speaking of the fictional character as if he had been real.

"People said, 'Billy Joe never had a lick of sense,' but I never believed that," the senator said.

Luckett dressed as a pope and spoke about the possibility that Billy Joe committed some sins, including taking his own life by leaping into the Tallahatchie River. Luckett announced that he "grants, conveys and bestows and publicly pronounces a special dispensation" for Billy Joe.

People sang "Wade in the Water," and a tombstone for McAllister was unveiled with the phrase: "He loved the river even unto death."

An Episcopal priest read a list of Mississippi authors and musicians who were also being memorialized, including William Faulkner and Muddy Waters.