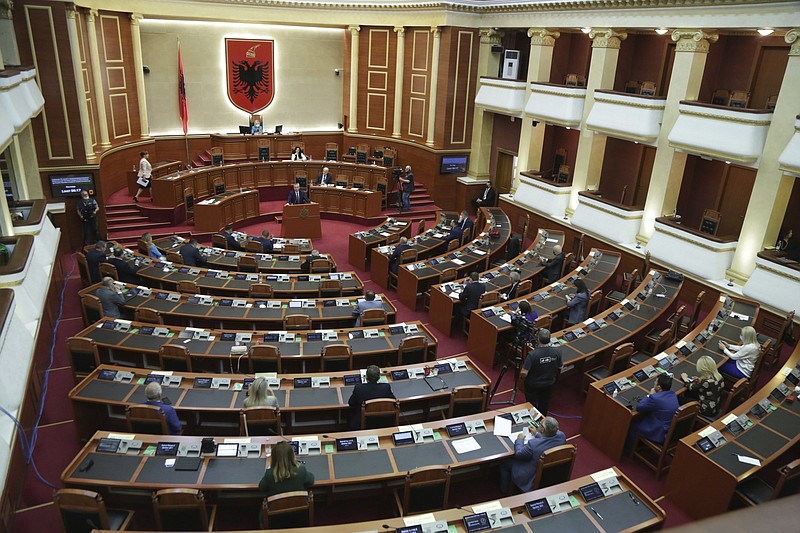 Albanian lawmakers attend a debate Wednesday in the parliament in Tirana. (AP)

TIRANA, Albania -- The Albanian Parliament on Wednesday impeached President Ilir Meta for violating the constitution and discharged him from the post.

In an extraordinary session, the parliament voted 104-7 to discharge the president. Three abstained. The final approval lies with Albania's Constitutional Court within three months.

A report after a parliamentary investigation concluded that Meta had violated the constitution with his biased approach against the ruling Socialists during the April 25 parliamentary electoral campaign. The report said Meta violated 16 articles and also incited violence.

"Ilir Meta has betrayed the mission of the president of ... Albania," Prime Minister Edi Rama said in his speech before the vote. "Ilir Meta has humiliated the constitution."

Meta has denounced the investigation and ouster attempt, arguing they are illegal.

His spokesman, Tedi Blushi, described the decision as "unconstitutional and ridiculous" and made by what he referred to as "the parliamentary rubbish dump."

In late April, 49 governing Socialist lawmakers asked for the investigative committee. They accused Meta, a former Socialist prime minister who left the party many years ago, of inciting instability and violence in the Balkan nation and siding with the political opposition ahead of the election.

GOMA, Congo -- Thousands of people are returning to Goma and a surrounding region in eastern Congo hoping to find their homes still intact weeks after a volcano erupted, but fearing the worst.

The eruption on May 22 of Mount Nyiragongo forced tens of thousands of people to flee with no warning as lava flowed through their communities.

More residents living on the outskirts of the North Kivu provincial capital were forced to evacuate again a week later when fears rose there would be another eruption. Authorities sent buses to take a number of people to safety in the town of Sake and other places in the days that followed.

But as people now start the journey home, they are worried about what awaits them and what help they will get.

"We had evacuated and the people stole everything we owned," said Matuso Sumbuo, from Kihisi, in the outskirts of Goma. She complained that authorities have promised aid but said that they have not received any help yet.

"We, who lived from day to day with the small businesses, how we will live now?" she said before boarding a bus with her family to return home.

The government of Nord Kivu said that those who lost their houses will remain in shelters in different regions but the rest can go back to their houses.

The attack happened in the district of Mardan in Khyber Pakhtunkhwa province as the officers returned to a police station after providing security for the polio team, said Adnan Azam, a senior police officer.

No one claimed responsibility for the attack, which came two days after Pakistan launched a nationwide drive to eradicate the crippling disease by the end of the year. Azam said a search for the attackers was underway and all the polio workers were safe.

Pakistani militants often target polio teams and police assigned to protect them, claiming the vaccination campaigns are a Western conspiracy to sterilize children.

Pakistan and neighboring Afghanistan are the only two remaining countries in the world where polio is endemic, after Nigeria was last year declared free of the disease.

SEOUL, South Korea -- A five-story building being demolished in southern South Korea collapsed on Wednesday, sending debris falling on a bus and killing nine people on board, officials said.

Concrete from the collapsed building in the southern city of Gwangju fell on the bus carrying 17 people which had stopped on a nearby street, the National Fire Agency said.

Emergency officers dispatched to the site rescued eight people from the bus, all seriously injured, before discovering the nine bodies, the agency said in a statement.

Fire officer Kim Seok-sun said in a televised briefing from the site that all workers at the building site had been evacuated before its collapse. He said some of the workers told investigators that they had closed a pedestrian walkway near the building before the collapse.

Fire agency officials said emergency officers were still searching for any other people who might be trapped under the debris. The cause of the collapse wasn't immediately known.

Authorities didn't immediately provide details of the other injured or dead people. 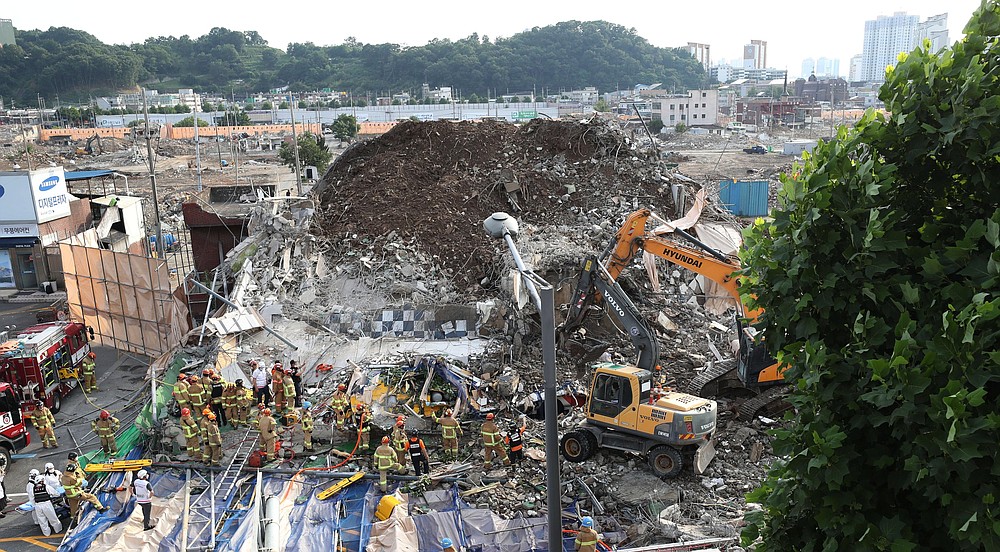