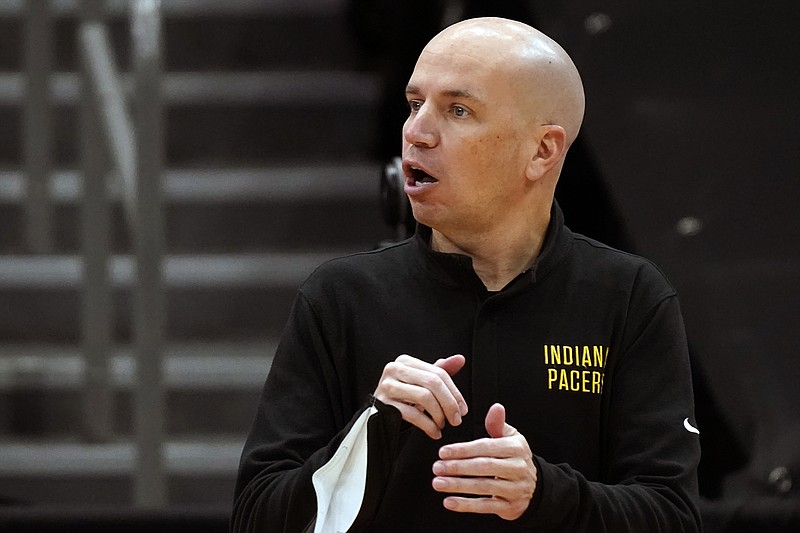 FILE - Indiana Pacers head coach Nate Bjorkgren calls a play against the Toronto Raptors during the first half of an NBA basketball game in Tampa, Fla., in this Sunday, May 16, 2021, file photo. The Pacers fired Nate Bjorkgren on Wednesday, June 9, 2021, after missing the playoffs in his only season as coach. (AP Photo/Chris O'Meara, File)

Kevin Pritchard hired Nate Bjorkgren to take the Indiana Pacers in a new direction. They went the wrong way. A season filled with defensive struggles, missed chances and locker room drama resulted Wednesday in the firing of Bjorkgren after only one season as coach. "This was my decision," said Pritchard, the Pacers' president of basketball operations. "This was a really tough decision, one that had a lot of thought behind it. I brought in my management team, something we didn't do lightly." Pritchard expected the 45-year-old coach, who spent the previous two seasons as Nick Nurse's top assistant in Toronto, to make an impact with his new-age approach and his creativity. Indiana went 34-38 before finishing the season with an embarrassing 142-115 loss to Washington in the play-in tournament -- a fitting end to an abysmal season. The Wizards averaged 140.3 points in sweeping four games from the Pacers. Indiana finished 25th in defensive scoring average (115.3 points), blew 17 fourth-quarter leads and produced its first losing record at home in 32 seasons.

Utah's Rudy Gobert won his third Defensive Player of the Year award Wednesday after helping the Utah Jazz to the best record in the NBA. Gobert had the most total blocked shots and defensive rebounds in the league this season and became the fourth player to win the award at least three times. A night after a game-sealing blocked shot in Game 1 of the Western Conference semifinals, Gobert received 84 first-place votes and 464 points from a global panel of 100 sportswriters and broadcasters. Philadelphia's Ben Simmons was second with 15 first-place votes and 287 votes, while Draymond Green of Golden State was third with 76 points.

Miami Heat President Pat Riley was fined $25,000 by the NBA on Wednesday for being too clear that he'd eagerly welcome a reunion with LeBron James. The league said Riley violated its anti-tampering rule with his remarks during an interview Friday on Dan Le Batard's radio show. Riley said he would "leave the key under the doormat" if James called and said he wanted to return to Miami. James led the Heat to two NBA titles and four consecutive appearances in the finals before returning to Cleveland in 2014.

Brenden Aaronson scored in the eighth minute, Daryl Dike and Reggie Cannon added their first international goals and the United States beat Costa Rica 4-0 in an exhibition on Wednesday night in Sandy, Utah, to complete a grueling stretch of four games in 11 days. Gio Reyna added a penalty kick in the 77th, three minutes after entering, in the last preparation match for most front-line American players before the pandemic-delayed start of World Cup qualifying in September. U.S. Coach Gregg Berhalter changed nine starters from the lineup he used to beat Mexico 3-2 in extra time on Sunday to win the first CONCACAF Nations League. The 20th-ranked U.S. improved 11-1-1 in its last 13 matches and won its 10th consecutive game against a regional opponent since a 2019 Nations League loss to Canada, matching the American high set in 2013.

The Green Bay Packers have added a veteran presence at inside linebacker by signing De'Vondre Campbell. The team announced the move Wednesday. Campbell comes to Green Bay after starting all 16 games for the Arizona Cardinals last season and posting 99 tackles, including 69 solos. Campbell, 27, previously spent four seasons with the Atlanta Falcons, who selected him out of Minnesota in the fourth round of the 2016 draft. He recorded two sacks and seven tackles for loss last season. Campbell has 462 total tackles, 25 tackles for loss, 7½ sacks and 6 forced fumbles in 75 career regular-season games. He has 70 career starts.

Brock Nelson scored twice in another big second period by New York, Semyon Varlamov stopped 23 shots and the Islanders beat the Boston Bruins 6-2 in Game 6 on Wednesday night to advance to the Stanley Cup semifinals for the second consecutive year. Kyle Palmieri, Trais Zajac, Cal Clutterbuck and Ryan Pulock also scored to help the Islanders set up a rematch with the defending champion Tampa Bay Lightning. Josh Bailey and Jean-Gabriel Pageau each had two assists. Brad Marchand scored twice for Boston, and Tuukka Rask made 23 saves. The Islanders' stifling defense limited the Bruins to just five shots on goal in the third. With the minutes winding down on Boston's season, New York hemmed the Bruins in their end of the ice, preventing them from pulling Rask for an extra skater until 1:25 left. Clutterbuck scored an empty-netter with 59 seconds left to seal it, and Pulock added another 11 seconds later.

Swiss teenager Dominic Stricker made his grass-court debut with a 7-6 (4), 7-6 (5) win over Radu Albot at the Stuttgart Open on Wednesday. The 18-year-old Stricker, who is ranked 335th, hit 10 aces and held his nerve in both tiebreakers to set up a second-round meeting with the second-seeded Hubert Hurkacz. Australian qualifier James Duckworth defeated seventh-seeded Adrian Mannarino 6-3, 6-2 to earn a meeting with Sam Querrey. The American defeated Turkish qualifier Altug Celikbilek 6-4, 6-1.

Texas Rangers closer Ian Kennedy was placed on the 10-day injured list on Wednesday because of a mild left hamstring strain. Kennedy's last appearance was in 30-pitch outing Friday night at home against Tampa Bay, when he got his 12th save of the season. It was the right-hander's first save opportunity in two weeks. Kennedy has a 2.53 ERA in 21 relief appearances, going 12 of 13 in save opportunities. He is eligible to return June 16, because the IL move was retroactive to Sunday. 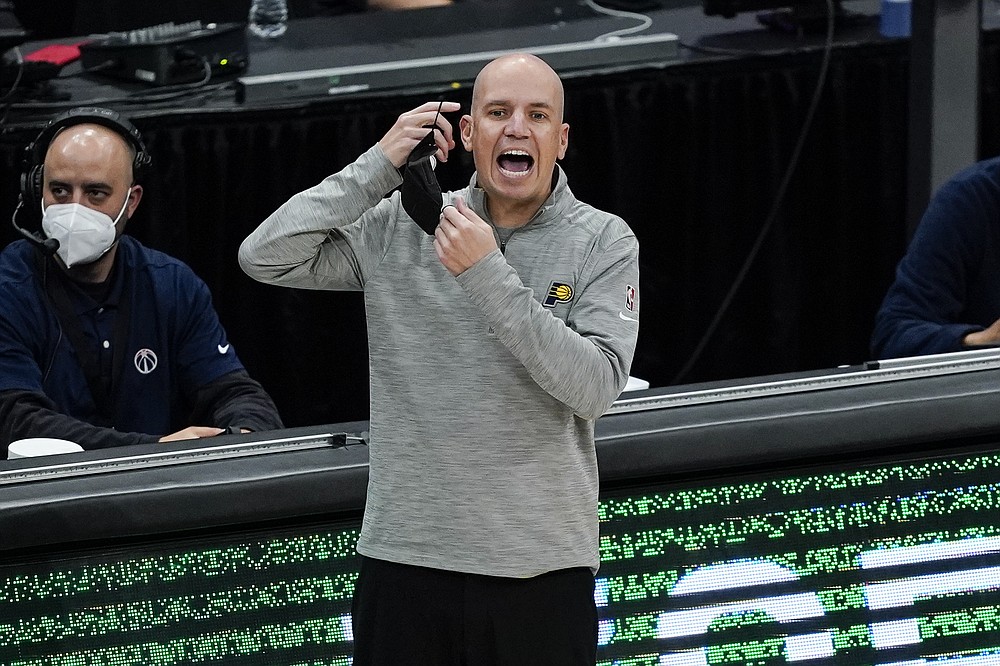 FILE - Indiana Pacers head coach Nate Bjorkgren directs his team during the first half of a basketball game against the Washington Wizards in Washington, in this Monday, May 3, 2021, filem photo. The Pacers fired Nate Bjorkgren on Wednesday, June 9, 2021, after missing the playoffs in his only season as coach. (AP Photo/Alex Brandon, File) 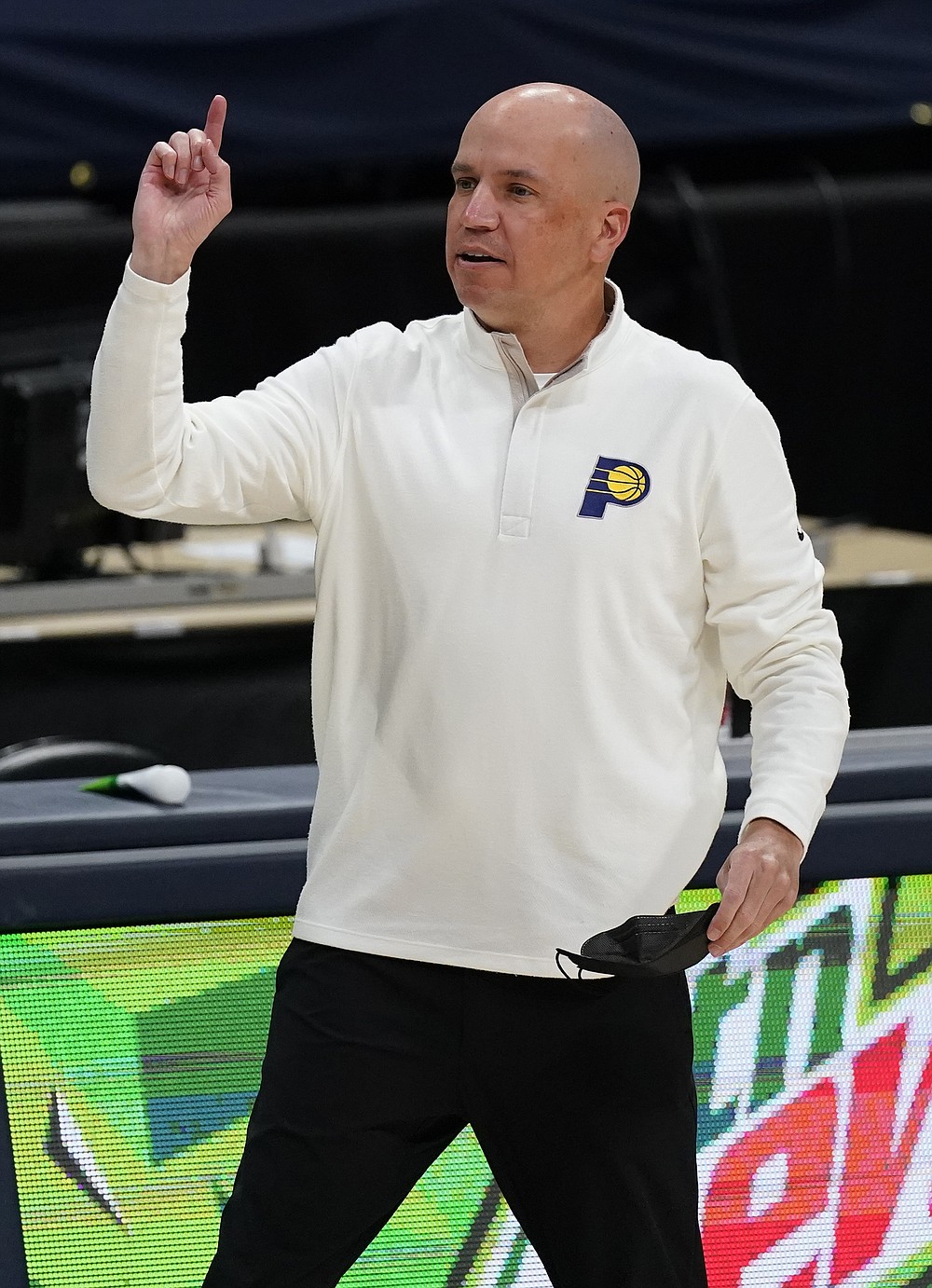 FILE - Indiana Pacers head coach Nate Bjorkgren gestures in the first half of an NBA basketball game against the Nuggets in Denver, in this Monday, March 15, 2021, file photo. The Pacers fired Nate Bjorkgren on Wednesday, June 9, 2021, after missing the playoffs in his only season as coach. (AP Photo/David Zalubowski, File)
ADVERTISEMENT