India prepares for next virus wave 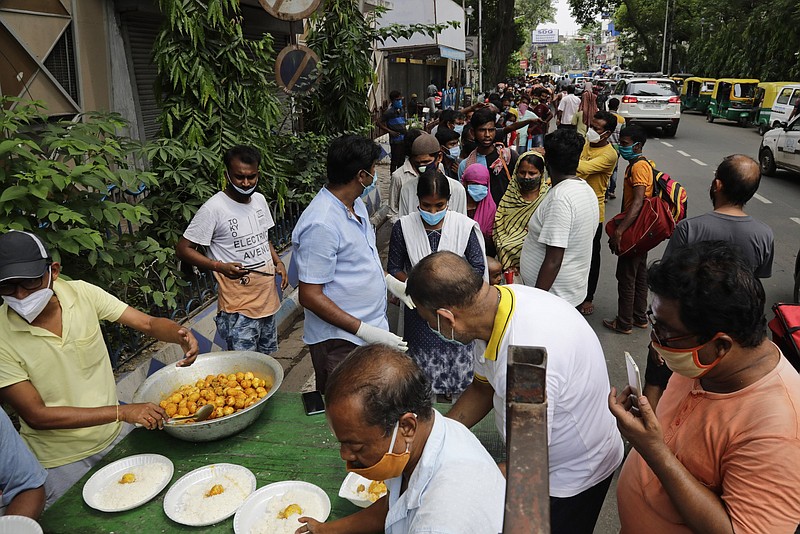 People line up Wednesday to receive free food distributed by a voluntary organization during lockdown to curb the spread of the coronavirus pandemic in Kolkata, India. (AP/Bikas Das)

NEW DELHI -- India, experiencing a drop in coronavirus cases, now faces the challenge of trying to gain the upper hand as many public health experts warn of a resurgence.

Key to the scramble are a renewed vaccination push and efforts to boost India's medical infrastructure to stockpile supplies, such as oxygen cylinders, and augment care networks from city slums to far-flung villages.

India's vaccine-makers, particularly the Serum Institute, are under pressure to enhance production to service the urgent domestic need even as the world waits for exports from the country to resume.

India is reeling from a pandemic punch that brought official daily death tolls of more than 4,500 at its peak in mid-May. At present, just 3.5% of India's more than 1.3 billion people are fully vaccinated.

The timing and intensity of another surge remain difficult to predict. K. Vijay Raghavan, a scientific adviser to the government, told reporters last month that a third wave was "inevitable" as the virus mutates. But he said the level of a coronavirus rebound could be reduced with strong measures.

"It depends much on how effectively the guidance is implemented," he said, referring to surveillance and containment measures. "It is difficult, but we can -- and must -- do this."

On Tuesday, India recorded nearly 86,500 cases -- the lowest figure in two months. Yet the number is still the highest in the world.

India also continues to record the highest number of deaths in the world, with a daily toll of more than 2,000 -- which experts say is a vast undercount. This week, for the first time in months, businesses and shops reopened in New Delhi and Mumbai, cities that were once at the heart of the country's pandemic crisis.

India was caught off-guard by the ferocity of the coronavirus wave, driven largely by a highly infectious local variant. Hospitals ran full, medicines were in short supply and bodies were found floating in the Ganges river, a testament to the scale of the crisis.

"It's not a question of whether but when," said Giridhar Babu, an epidemiologist at the Public Health Foundation of India, referring to a possible new coronavirus wave. An "aggressive containment" strategy, he said, is essential.

"As soon as a cluster of cases is found, they should be sequenced for genomic markers to check if they are the same or new variants," Babu said.

The other way to counter another wave is faster and wider vaccine coverage, he said. More than 230 million Indians have received at least one shot of a coronavirus vaccine. But in a country of India's size, that means just 18% of the population is partially vaccinated.

India's vaccination drive that started in January with fanfare has struggled in the past few months, at a time when it needed to have ramped up.

Prime Minister Narendra Modi has stepped in. On Monday, he reversed his government's decision to give state governments a role in acquiring coronavirus vaccines. The policy had been criticized for exacerbating shortages in some regions.

Beginning June 21, the central government will be in charge of buying 75% of the vaccine supply, with the rest being earmarked for the private sector for purchase. Coronavirus vaccinations for all adults at government sites will be free.

The reversal comes days after the Supreme Court slammed the government for its muddled policies.

Doctors say the speed of vaccination is crucial for India. "The rapidity of vaccination plays an important role in the evolution of new variants," said Lancelot Pinto, a pulmonologist at P.D. Hinduja Hospital in Mumbai. The virus, he said, will learn how to mutate and propagate among those not vaccinated.

"We don't want to be in a situation where the pace [of vaccinations] is so slow that the virus outsmarts us," Pinto said.

Inequities in the vaccination drive have emerged in recent days, with the rich being able to afford shots at private hospitals while the poor struggle to pay or register online to book slots. Authorities in Uttar Pradesh, India's most populous state, are investigating a free vaccine camp held in a posh residential colony of Noida using shots meant for a small town miles away.

With vaccines heading back under federal control, state governments are charting their own plans for the months to come. The states of Delhi and Maharashtra have set up pediatric task forces. During the recent wave, doctors reported many more younger patients with severe illness than in the previous surge.

New Delhi, the nation's capital that hit 28,000 daily cases in April, is planning to handle a possible peak of 37,000 cases in any future surge.

The city was ravaged by an acute shortage of oxygen, with major hospitals pleading for the government to send supplies. Dozens of small oxygen plants are being set up, and storage capacity is being increased to have a day's buffer of supply.

"It is our duty to be prepared" in case a third wave "turns out to be extremely dangerous," said Arvind Kejriwal, the Delhi chief minister, announcing the measures last week.