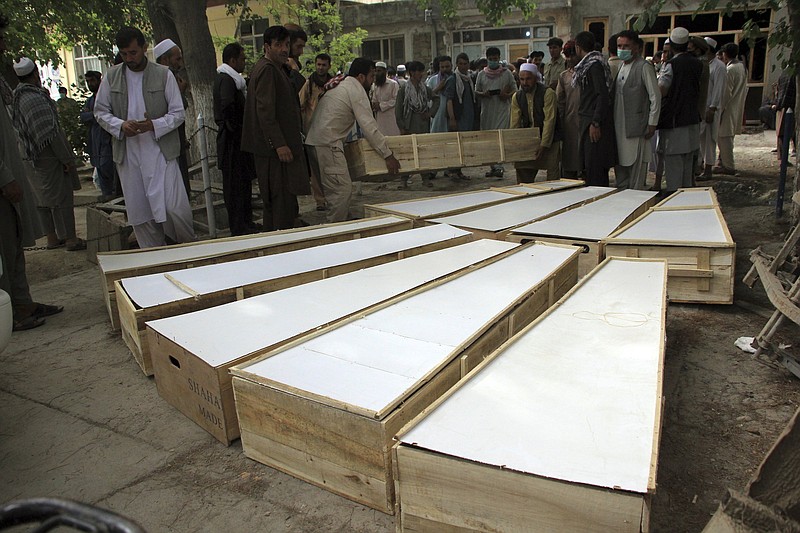 The coffins of people killed in an attack on a de-mining camp late Tuesday are placed on the ground Wednesday outside a hospital in northern Baghlan province, Afghanistan. (AP/Mehrab Ibrahimi)

KABUL, Afghanistan -- At least 10 people were killed and 16 others wounded in an armed attack on staff members of a British-American charity in Afghanistan that has been clearing land mines in the country for decades, officials said Wednesday.

The Islamic State group claimed responsibility for the attack, according to the SITE Intelligence Group, which monitors announcements by the terrorist organization. The assault occurred late Tuesday at a de-mining camp in the northeastern province of Baghlan and targeted employees of the charity, the HALO Trust.

Tariq Arian, a spokesman for the Interior Ministry, said that the victims were all Afghan citizens and that the wounded had been transferred to hospitals.

The HALO Trust, a British charity with a U.S. affiliate registered in Washington, said in a statement Wednesday that an "unknown armed group" entered the de-mining camp at 9:50 p.m. Tuesday and opened fire on about 110 Afghan men who had been working in nearby minefields.

"We strongly condemn the attack on our staff, who were carrying out humanitarian work to save lives," it said.

[Video not showing up above? Click here to watch » https://www.youtube.com/watch?v=cVwTA5Piwro]

Jawid Mazlomyar, 30, who has worked with HALO for more than a decade, described the scene that unfolded around him in Baghlan. He said the armed attackers had rounded up those in the de-mining camp and cut off the power before ransacking the occupants' belongings and taking their cellphones and money.

"They were screaming and insulting us and saying, 'Who is your manager? Tell us otherwise we are killing you,'" Mazlomyar said.

Then, consistent with previous attacks by the Islamic State in Afghanistan, the attackers asked who among those in the camp were Hazaras, a persecuted, largely Shiite minority in the country. Last month, the Islamic State was accused of attacking a primarily Hazara school in Kabul, the capital, killing more than 80 people, most of them teenage girls.

"We told them that we are Muslim and every day we are praying," Mazlomyar said. "They asked again, and we responded that there is no Hazara and we all are Muslims. At that time, they started firing."

Mazlomyar added that, in the end, the attackers did not single anyone out.

"They killed everyone," he said.

Arian initially blamed the Taliban for the attack.

Zabihullah Mujahid, a spokesman for the Taliban, denied any involvement and said that the area where the "horrifying" attack had taken place was not under the militant group's control.

"We condemn attacks on the defenseless & view it as brutality," he said on Twitter. "We have normal relations with NGOs, our Mujahidin will never carry out such brutal acts."

Tolo News, a news network in Afghanistan, published footage on Twitter that it said showed people wounded in the attack being taken on stretchers to a hospital in Pul-e-Khumri, a city about 140 miles north of Kabul, the capital.

Ramiz Alakbarov, the U.N. secretary-general's deputy special representative for Afghanistan, called for an investigation into the attack and described it as "heinous."

"It is repugnant that an organization that works to clear land mines and other explosives and better the lives of vulnerable people could be targeted," he said in a statement.

The HALO Trust began working in Afghanistan in 1988. Its field teams clear land mines, dispose of unexploded ordnance found in bombs and bullets, and build facilities to store guns and other weapons safely. The group has programs in 26 countries and territories, including in Iraq, where it began working in 2018.

The HALO program in Afghanistan, which started months before the Soviet army pulled out of the country in 1989, employs more than 2,600 locals and remains the group's largest operation in the world. HALO says on its website that over the past 30 years, it has worked with the Afghan government to make nearly 80% of the country's recorded minefields and battlefields safe.

Still, the group says, an area of Afghanistan as large as Chicago still needs to be cleared.