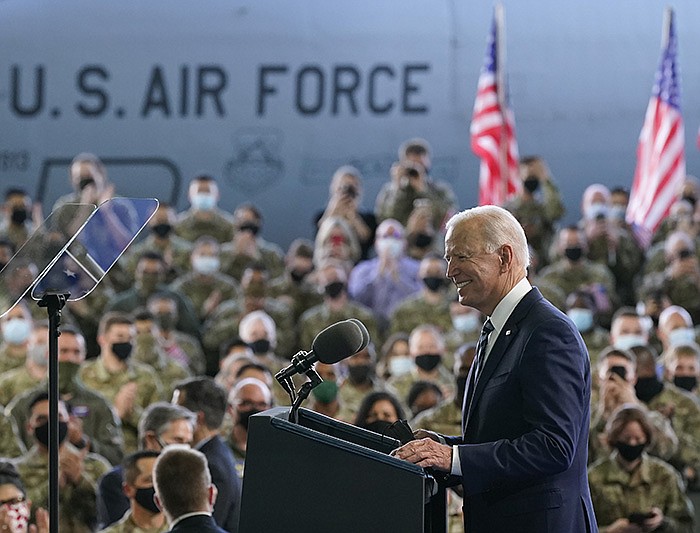 “We’re going to make it clear that the United States is back and democracies are standing together to tackle the toughest challenges and issues that matter the most to our future,” President Joe Biden told American service members Wednesday at Royal Air Force Mildenhall in Suffolk, England. (AP/Patrick Semansky)

MILDENHALL, England -- President Joe Biden opened the first overseas trip of his term Wednesday with a declaration that "the United States is back" as he seeks to reassert the nation on the world stage and steady European allies deeply shaken by his predecessor.

Biden has set the stakes for his eight-day trip in sweeping terms, believing the West must publicly demonstrate it can compete economically with China as the world emerges from the coronavirus pandemic.

The president's first stop was a visit with U.S. troops and their families at Royal Air Force Mildenhall, where he laid out his mission for the trip.

"We're going to make it clear that the United States is back and democracies are standing together to tackle the toughest challenges and issues that matter the most to our future," he said. "That we're committed to leading with strength, defending our values and delivering for our people."

The challenges awaiting Biden overseas were clear as the president and the audience wore masks -- a reminder of the pandemic that is still raging around much of the world even as its threat recedes within the United States.

[Video not showing up above? Click here to watch » https://www.youtube.com/watch?v=zFn_ovBSjHE]

Shortly before the president spoke, people briefed on the matter said the Biden administration had brokered an agreement with Pfizer to purchase 500 million covid-19 vaccine doses to be distributed by COVAX, the World Health Organization-backed initiative, to lower- and middle-income countries over the next year.

After addressing the troops, Biden and first lady Jill Biden flew to Cornwall Airport Newquay, then traveled by car to Tregenna Castle in St. Ives, where they are staying until Sunday.

Building toward his trip-ending summit with Russian President Vladimir Putin, Biden will aim to reassure European capitals that the United States can once again be counted on as a dependable partner to thwart Moscow's aggression both on their eastern front and their internet battlefields.

The trip will be far more about messaging than specific actions or deals. And the paramount priority for Biden is to convince the world that his Democratic administration is not just a fleeting deviation in the trajectory of an American foreign policy that many allies fear irrevocably drifted toward a more transactional outlook under former President Donald Trump.

"The trip, at its core, will advance the fundamental thrust of Joe Biden's foreign policy," national security adviser Jake Sullivan said, "to rally the world's democracies to tackle the great challenges of our time."

Biden is looking to rally allies on their covid-19 response and to urge them to coalesce around a strategy to check emerging economic and national security competitor China even as the U.S. expresses concern about Europe's economic links to Moscow. Biden also wants to nudge outlying allies, including Australia, to make more aggressive commitments to the worldwide effort to curb global warming.

The week-plus journey is a big moment for Biden, who traveled the world for decades as vice president and as chairman of the Senate Foreign Relations Committee, and has now stepped off Air Force One onto international soil as commander in chief. He will face world leaders still grappling with the virus and rattled by four years of Trump's inward-looking foreign policy and moves that strained longtime alliances as the Republican former president made overtures to strongmen.

"He has been getting ready for 50 years," White House press secretary Jen Psaki said. "He has been on the world stage. He's known a number of these leaders for decades ... and there's nothing like face-to-face engagement in diplomacy."

The president first attends a summit of the Group of Seven leaders in the U.K., and then visits Brussels for a NATO summit and a meeting with the heads of the European Union. The trip comes at a moment when Europeans have diminished expectations for what they can expect of U.S. leadership on the foreign stage.

Central and Eastern Europeans are desperately hoping to bind the U.S. more tightly to their security. Germany is looking to see the U.S. troop presence maintained there so it doesn't need to build up its own. France, meanwhile, has taken the tack that the U.S. can't be trusted as it once was and that the EU must pursue greater strategic autonomy going forward.

The sequencing of the trip is deliberate: Biden consulting with Western European allies for much of a week as a show of unity before his summit with Putin.

During the four-day trip to the U.K. Biden, in addition to attending sessions of the G-7, will meet separately with Prime Minister Boris Johnson today and visit Queen Elizabeth II at Windsor Castle. He is expected to confer with other allies, including French President Emmanuel Macron and Japanese Prime Minister Yoshihide Suga, on the sidelines of larger meetings, and has a potentially contentious discussion set Monday with Turkish President Recep Tayyip Erdogan.

The G-7 meeting will focus on economic recovery and the growing pressure on wealthy nations like the United States and Britain to provide coronavirus vaccine doses to poorer ones.

Because of the pandemic, the G-7 gathering with Britain, Canada, France, Japan, Germany and Italy will offer Biden his first chance to see leaders of many of the closest U.S. allies face to face. It is also the first major in-person world gathering since Britain left the EU.

Biden goes into the meeting of rich market democracies after the countries' finance ministers agreed this month to endorse a global minimum tax rate of 15% for corporations. The figure is lower than Biden wanted, but it's an important marker toward his goal of discouraging companies from headquartering wherever their taxes will be lowest.

During his tenure, Trump disrupted two G-7 meetings, in Canada and France, over his "America First" trade agenda and his hostility to even the notion of collective international decision-making.

This session, on the other hand, is expected to be calm, with the goal of reestablishing the cooperative mood and predictable approach that is a main goal of Biden's diplomacy.

"The last four years have not been easy," said one European official, adding that in contrast, his government currently "couldn't find any issue on which we disagree" with the United States, something that was not the case even under the Obama administration. For the G-7 and NATO, the official said, "it is a rare moment."

Another central focus will be China. Biden and the other G-7 leaders will announce an infrastructure financing program for developing countries that is meant to compete directly with Beijing's Belt-and-Road Initiative. But not every European power has viewed China in as harsh a light as Biden, who has painted the rivalry with the techno-security state as the defining competition for the 21st century.

The EU has avoided taking as strong a stance on Beijing's crackdown on Hong Kong's democracy movement or treatment of Uyghur Muslims and other ethnic minorities in the western Xinjiang province as the Biden administration may like. But there are signs that Europe is willing to put greater scrutiny on Beijing.

NATO leaders are hoping for a sharp change in tone from the previous administration.

"It matters that President Biden has a strong personal commitment to NATO, something I really feel," Jens Stoltenberg, the alliance's secretary general, said in an interview. "He's been to NATO headquarters many, many times... . His personal knowledge of NATO and Europe of course matters."

Biden and Stoltenberg met Monday in Washington, and the secretary general said the president conveyed a "very strong message" of support.

Still, Biden will need to salve bruised feelings among NATO partners who felt blindsided by his rapid decision to withdraw U.S. forces from Afghanistan. NATO troops fought alongside Americans in what remains the alliance's largest ever military undertaking.

"European allies were caught on the wrong foot by the Biden administration's withdrawal announcement," said Constanze Stelzenmuller, a scholar at the Center on the United States and Europe at the Brookings Institution. "They agree in substance, with misgivings about the outcome, but they felt that they had not been consulted on the timeline."

Biden will also meet in Brussels with leaders of the EU.

Stavros Lambrinidis, the EU ambassador to the United States, said at a recent event organized by the German Marshall Fund that the summit will have two audiences.

"One audience is domestic, it is our people, Europeans and Americans," he said. "And for that audience, it is extremely important for us to be able to show that the transatlantic alliance delivers for our citizens' security and prosperity in a way that going it alone never could."

The second audience, Lambrinidis said, is would-be dictators: "If your hope is to spread authoritarianism around the world, well then you should stand up and notice as well, because this alliance will do everything it can to stop this from happening."

The trip finale will be Biden's meeting with Putin in Switzerland on June 16. Biden is expected to challenge the Russian leader on his country's practice of cyberattacks, its human rights violations and its invasion of Ukraine, among other subjects, while seeking more cooperation in arms control and other areas.

"He will do so, of course, after having had nearly a week of intensive consultations with allies and democratic partners from both Europe and the Indo-Pacific," Sullivan said this week. "So he will go into this meeting with the wind at his back."

The underlying goal is to demonstrate a sharp pivot from Trump's public deference to Putin, which was on display when the two met in Helsinki in 2018. Biden's aides were at pains this week to assert that even though Biden initiated the meeting, it did not amount to a reward for Putin's misbehavior, as some Republicans have suggested.

Information for this article was contributed by Jonathan Lemire and Aamer Madhani of The Associated Press; and by Anne Gearan, Ashley Parker and Karen DeYoung of The Washington Post. 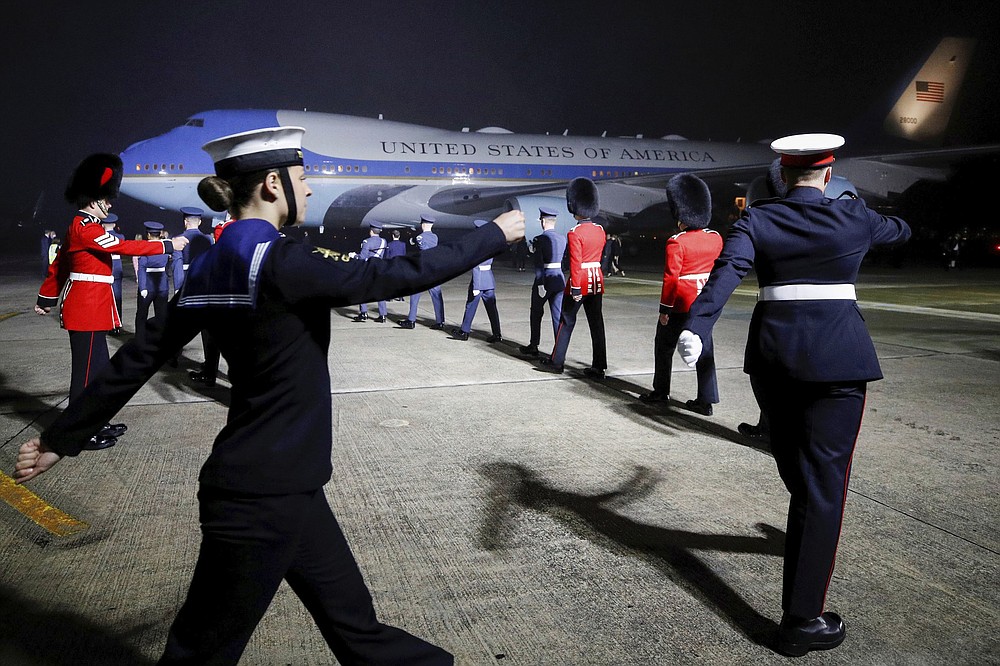 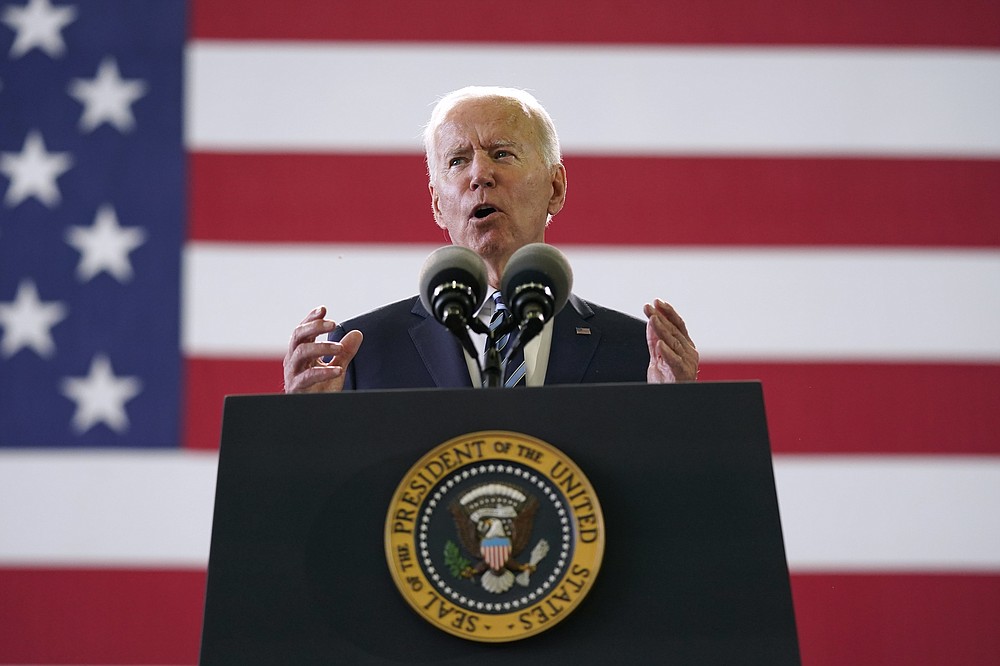 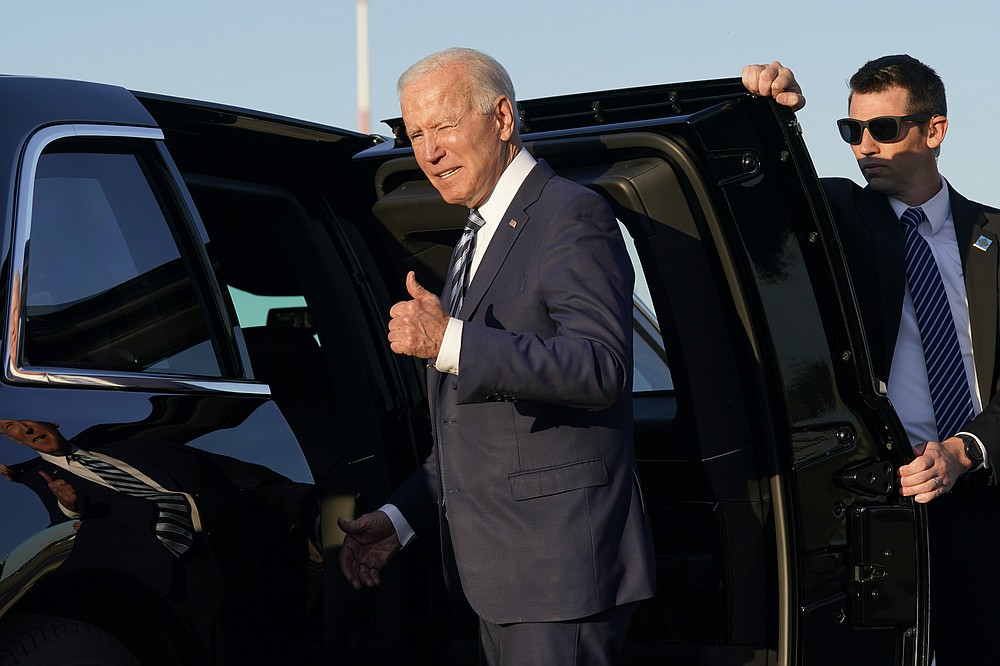 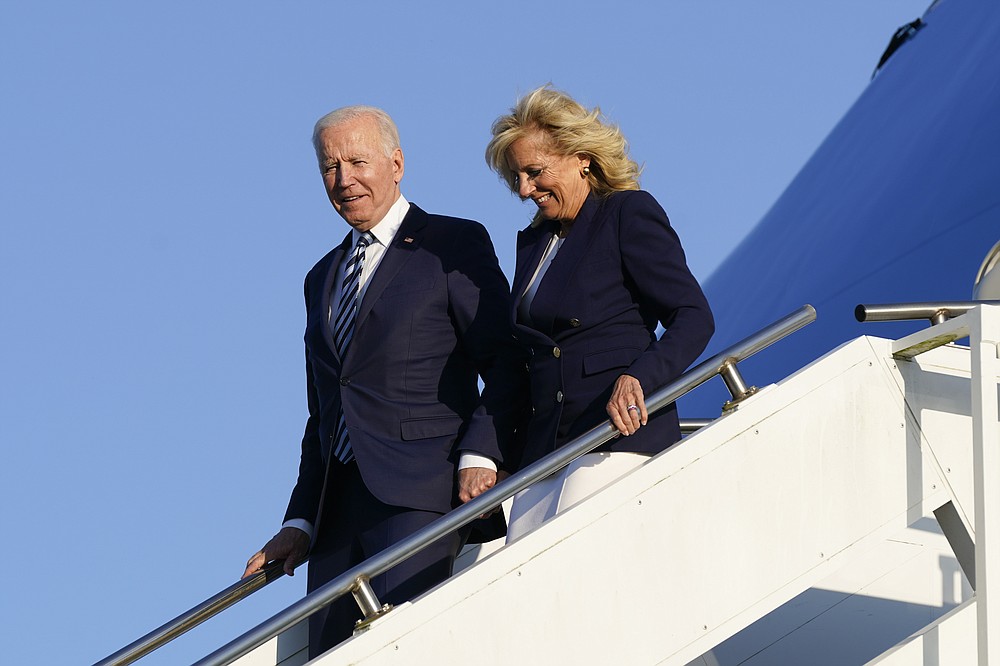 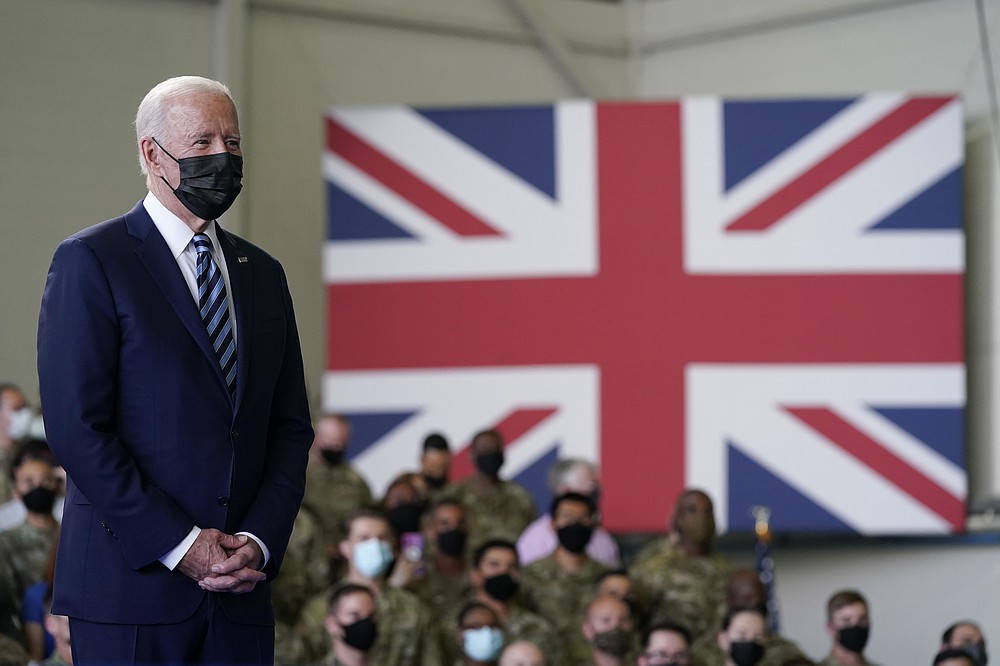 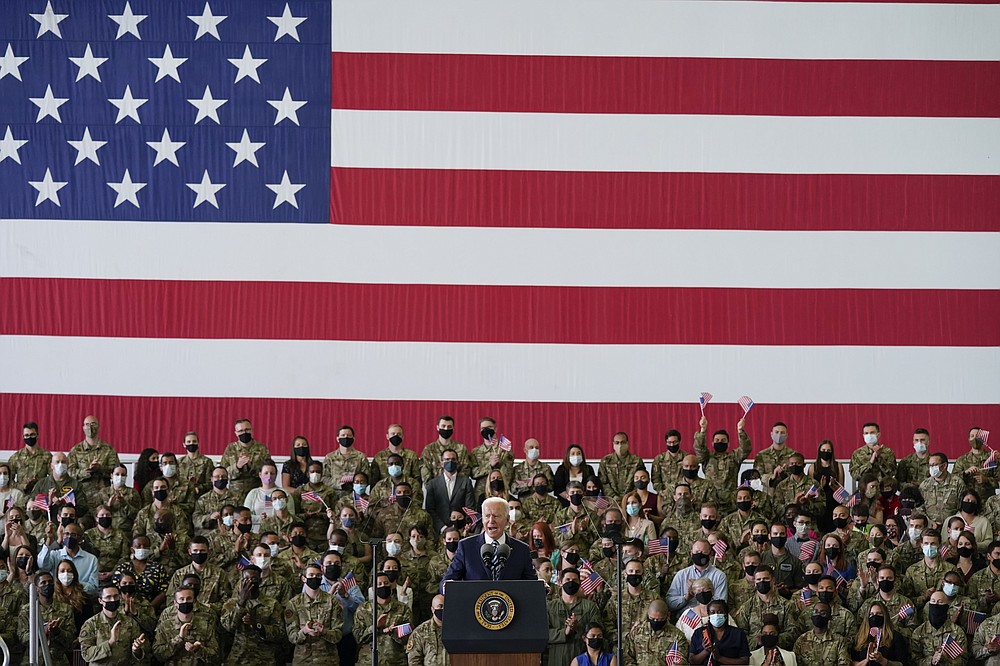 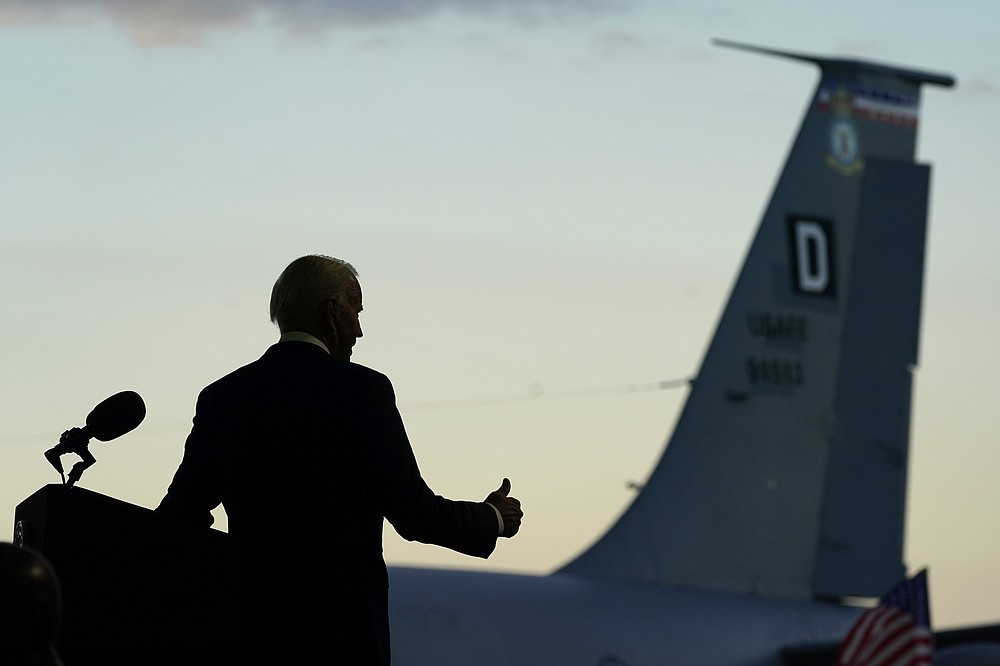 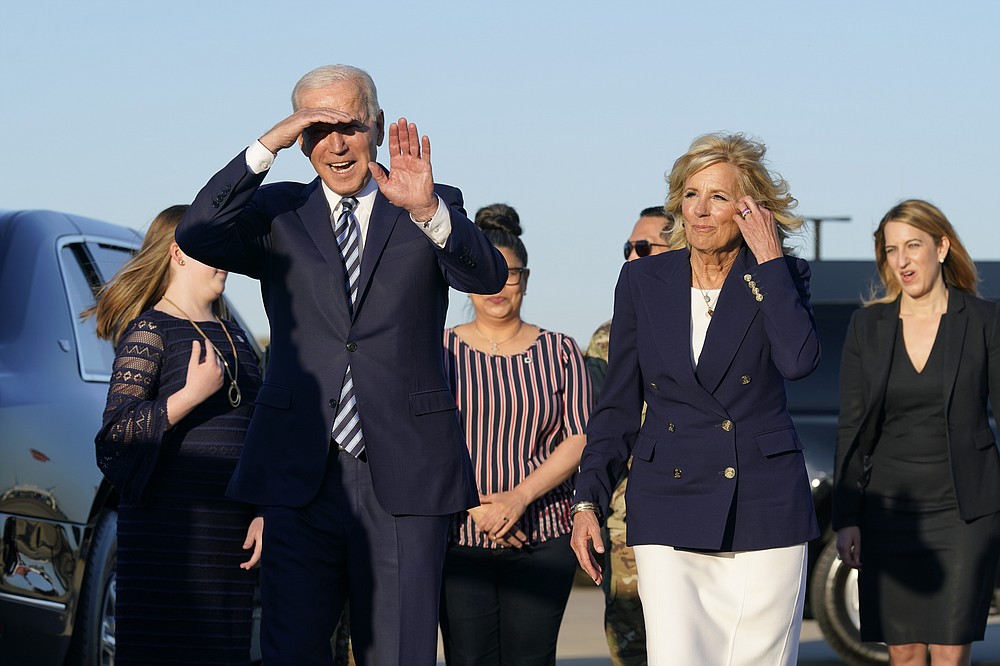 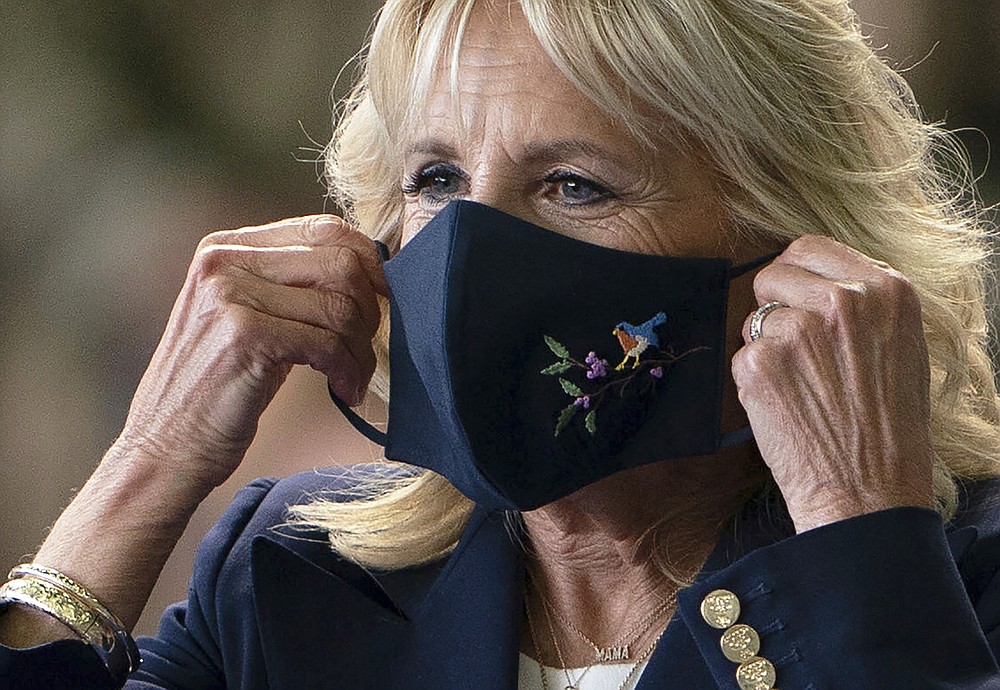 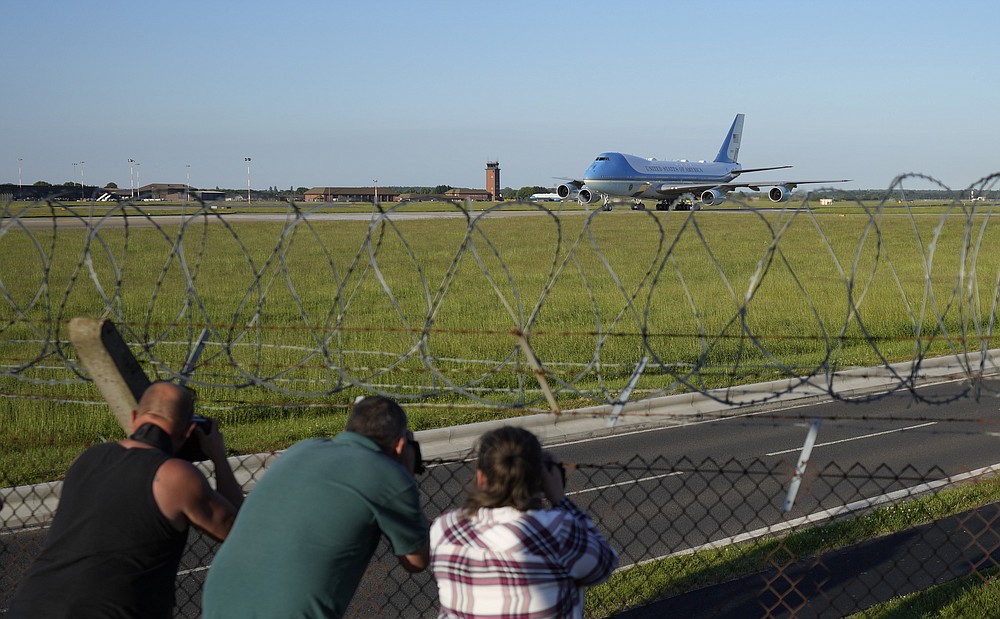