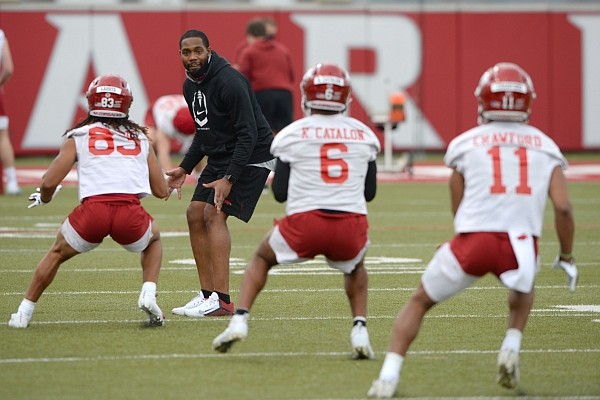 Mikal Harrison-Pilot, a 2023 athlete, enjoyed his visit to Arkansas on Tuesday so much he’s looking to attend a game in the fall.

He praised Alex Dale, who works in player personnel, for showing him and his father around.

“I enjoyed the tour a lot,” he said. “Alex did a great job setting up the tour. The facilities were amazing. (Strength and conditioning) Coach Jamil Walker was great talking to me about the sports performance aspect of the game.

"I talked with a few of of the players and they had nothing but great things to say about Arkansas and the coaching staff.”

He plays defensive back and receiver, but offensive coordinator Kendal Briles and receivers coach Kenny Guiton want him on offense.

“Coach Briles and Coach Guiton were real cool to hang with,” Harrison-Pilot said. “They really want me at wide receiver. Coach (Sam) Pittman is real down to earth and is excited about the future of the Razorbacks.”

“I got to hang out with Coach Odom as well and learn about his defensive philosophy if I were to play safety for them,” Harrison-Pilot said. “At the end we did a photo shoot, which was really enjoyable.

"Definitely can’t wait to see them play this season.”

Harrison-Pilot is planning to make a return trip to Fayetteville during the fall.

“Definitely want to check out the game atmosphere,” he said.