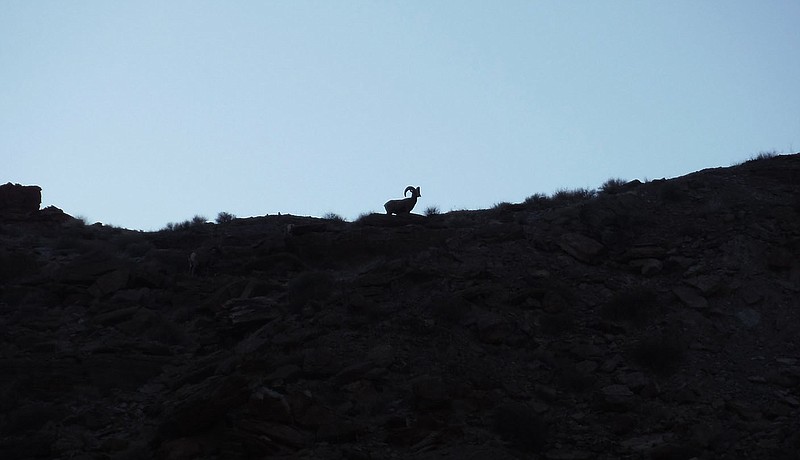 A longhorn sheep is visible on the Navajo Indian Reservation across from Honaker Campground on the San Juan River in southeast Utah. (NWA Democrat-Gazette/David Gottschalk)

A group of sixteen paddlers from Fayetteville and the Mulberry River valley won the adventure lottery Dec. 1, 2020.

They'd applied for a permit to float the San Juan River in southeast Utah. At 8 a.m. Mountain Standard Time on that first day of December, the federal Bureau of Land Management began accepting permit applications for the San Juan -- on a first come, first serve basis -- for the upcoming season.

These highly sought after permits allow access to a little more than 100 miles of floating on the San Juan between Montezuma Creek and Clay Hills Crossing. The number of groups, groups sizes and areas on the river are highly regulated by the bureau and a permit is required to float.

The Arkansans won! Not a preferential date. But they won!

The bureau received over 11,000 requests. "A very unusually high amount of applicants," said Josh Sherrock, park ranger with the bureau. Only 900 permits are issued.

The Northwest Arkansas group had three people online when the application period began at 7 a.m. sharp Central time and received a permit for April 6 through April 14. That's only one day later than they requested.

On Easter Sunday, four-full size pickups, one hauling eight canoes on a trailer, and a Chevy Suburban with one couple, left Arkansas on the first of two driving days. The destination for the evening was Amarillo, Texas, the half way point between Fayetteville and Bluff, Utah. Cell phones kept the caravan coordinated and eased logistics such as fuel, food and the occasional "we need to stop" breaks.

All five vehicles eventually arrived early Monday evening at the Sand Island Campground a few miles west of Bluff off of Utah 163. The highway ran next to the San Juan River for the last 20 minutes of the drive.

The campground is convenient, and it's also the put in for the majority of trips on the San Juan. Campsites must be reserved in advance. The Bureau of Land Management maintains the campground, boat ramp and a ranger station on site.

Everyone on the trip was assigned to fix a meal. Bob Kramer drew the first dinner for our group on the trip. Sitting on a pickup tailgate, Kramer served a tuna pasta and vegetable salad as the main course with sides of sliced cheese and fresh strawberries that Monday evening.

Dehydrated foods are not an option for this bunch. For nine days the group feasted on Amanda Harris's broiled chicken soup, venison chili prepared by Bob Walsh and a "hobo" style stew from Danny and Debbie Stillwell. Other meals included beef stroganoff and a sausage and marinara sauce spaghetti. Those were topped by a crawfish etouffee dinner served riverside with white rice and french bread by Bobby Cox on the following Monday.

Original planning had members of the group driving up river Tuesday to float 18 miles in empty boats from Montezuma Creek back to the campground. The river was low, only flowing a little over 500 cubic feet per second. The decision was made not to float that day.

The water flow in the San Juan River is dependent on a factors that include snow melt, seasonal rain and water released from Navajo Dam, at Navajo Dam State Park in New Mexico. They all fluctuate, according to Sherrock.

"Not too much difficulty going through rapids and not too pushy to make landings," he said.

The water was still moving at an average of 3 to 3.5 mph. That's a nice speed to travel in a canoe. A disadvantage of the low river level for both the canoes and the raft was the exposure of rocks that would normally be under water. Those rocks were often at the top and bottom of the rapids.

The major attractions of the river are canyon scenery, archaeology, desert wildlife and geographic features.

The good fortune of December 2020 paid off visibly. The Sand Island petroglyphs and petroglyph panel are a popular attractions. Located on both ends of the campground, the rock images are from the Archaic, Puebloan, Navajo and Ute people dating back 3,000 years.

The images depict the history of people who lived, farmed and traveled through the area. The paddlers spent the majority of Tuesday exploring the petroglyphs, assessing equipment and making a quick trip into the small town of Bluff for final supplies.

Wednesday morning arrived and 12 paddlers in canoes and four on a raft began the task of rigging and stowing gear for the first 14.5-mile float. That drift revealed sites that included "Moki Steps." The steps are toehold footprints worn into inclined sandstone.

At mile 4.7, floaters can pull over and walk to the 2,000 year old Butler Wash Petroglyph Panel. At 5.9 miles, the River House bluff dwelling can be visited by a one-quarter-mile hike. The pueblo ruin is south facing and is one of the largest structures of its kind in the area.

Preservation is emphasized throughout the region. Most historic sites have information boards and reminders to treat the area with care. The Bureau of Land Management manages the surrounding lands up to mile marker 45.5, where it becomes Glen Canyon National Recreation Area. Land downstream on river left is Navajo reservation land. Additional permits must be attained before visiting that property.

Rules for the river include "pack it in, pack it out." That includes all trash, fire ashes and human waste. Portable toilets are required for all groups. The river and campsites are monitored by the bureau and other boaters. There is also a monitored honor system when it comes to the use of designated campsites. Large campsites are for large groups. Small campsites are for small groups. Coordination of the overnight stays is regularly handled by communication between groups as they float down river.

Weather for the eight days on the river averaged in the middle 70s during the day and middle 40s at night. The wind tended to pick up around 1:30 p.m. daily and last into the early evening. No rain fell during the 10 days the group visited the area.

Six of the eight days were spent on the water, and two were days in camp or exploring the area.

Guidebooks for the river are essential. The books have a mile-by-mile breakdown of the river highlighting attractions, campsites, geography and water features. Besides multiple unnamed rapids, the 83.5 miles includes six named Class II rapids and one named Class III rapid.

The Class II rapids all proved capable of swamping a canoe if positioned wrong. The Class III rapid, named Government, had a considerable debris field at the top to navigate, large boulders in the middle and then a final obstacle of rocks at the bottom. The low river level narrowed the passages around the obstacles.

One of the 12 canoes became pinned and two others had their boaters bucked into the air with one person landing back on top and straddling the canoe with a bear hug to finish the ride.

Seven of the 16 boaters hiked the Honaker Trail on the Sunday day off. Augustus Honaker started the trail in 1894 to support his mining claim.

The hike up takes about two hours on average and the climb down about an hour and a half. The views from the top helped put the gooseneck-like canyon walls into perspective. The water flowed in all four directions during the trip.

Clay Hill Crossing river access was the take-out 17 miles downstream from the last campsite. The first 10 miles moved along as normal, dodging the occasional semisubmerged boulder. For the last eight miles, however, the afternoon head wind picked up, the river widened and sandbars dominated the middle passage. The canoes and raft were grounded in only a few inches of water more often then not and then pulled over the sand by their now-walking occupants.

The San Juan River float is now another chapter in the continuing story of this group of winter paddlers who have floated together for more than two decades.

Summarized by Sherrock: "It's just luck of the draw." 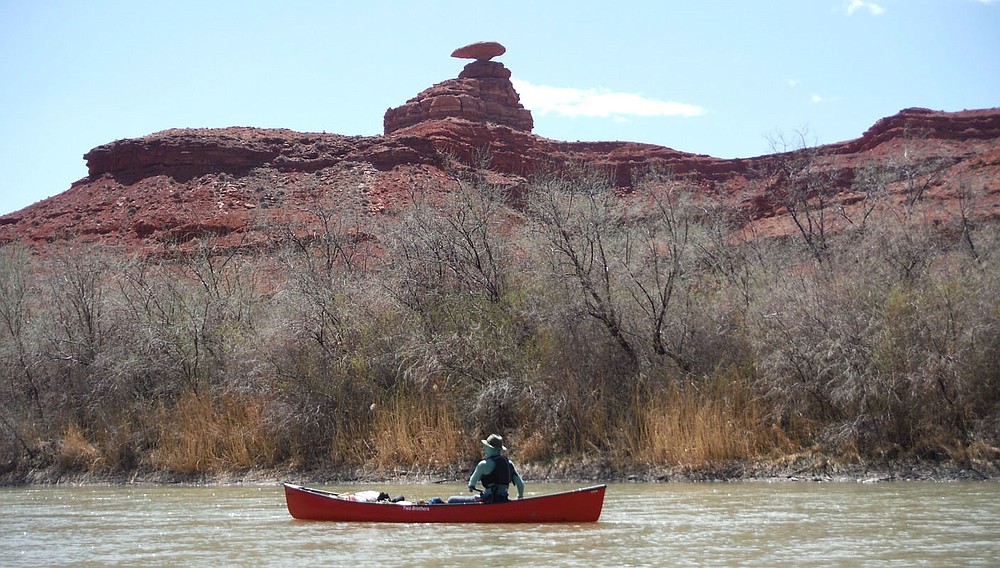 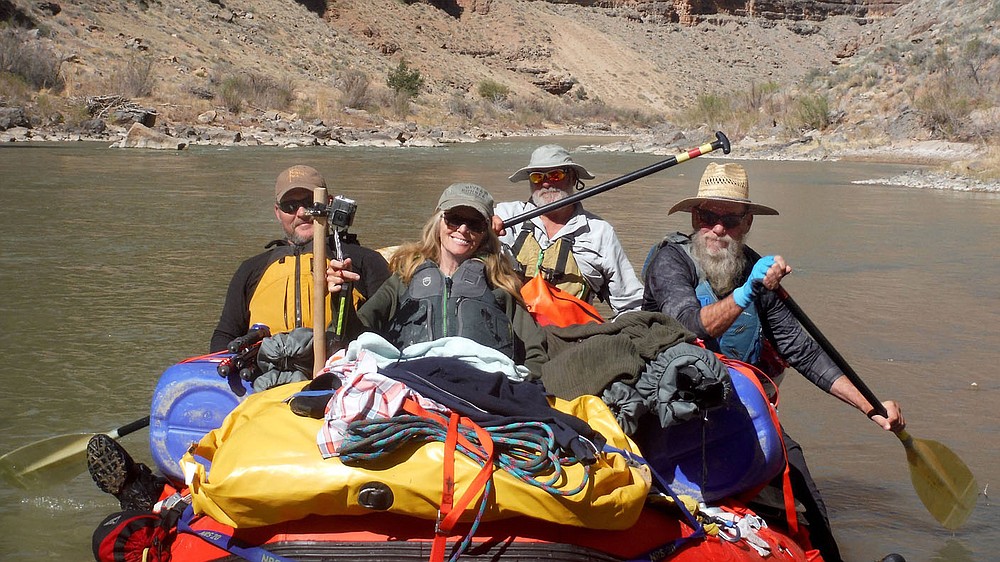 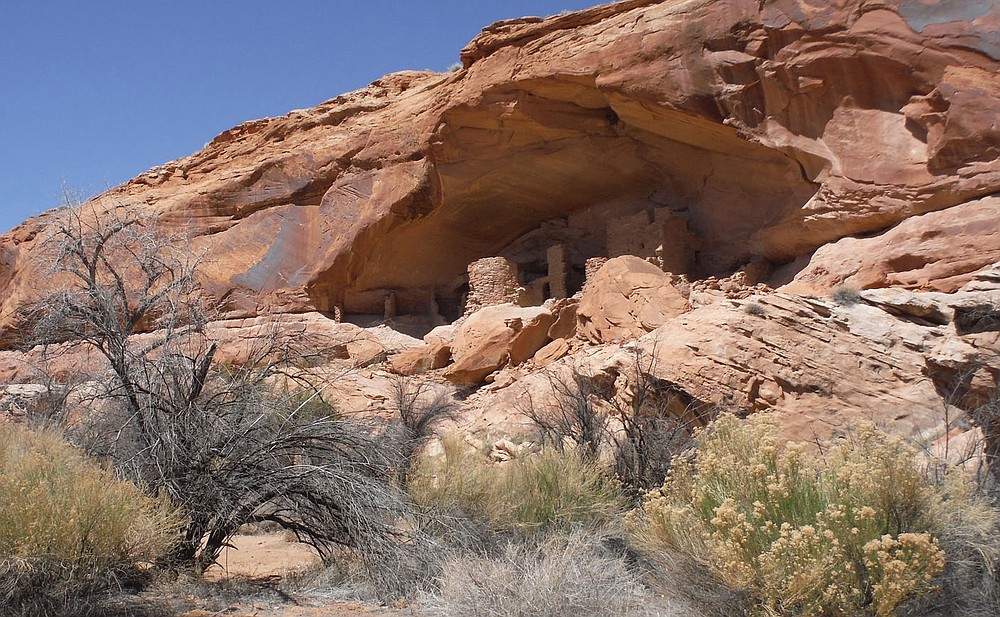 An ancestral ruin built under a bluff is seen in April 2021 on the San Juan River. (NWA Democrat-Gazette/David Gottschalk) 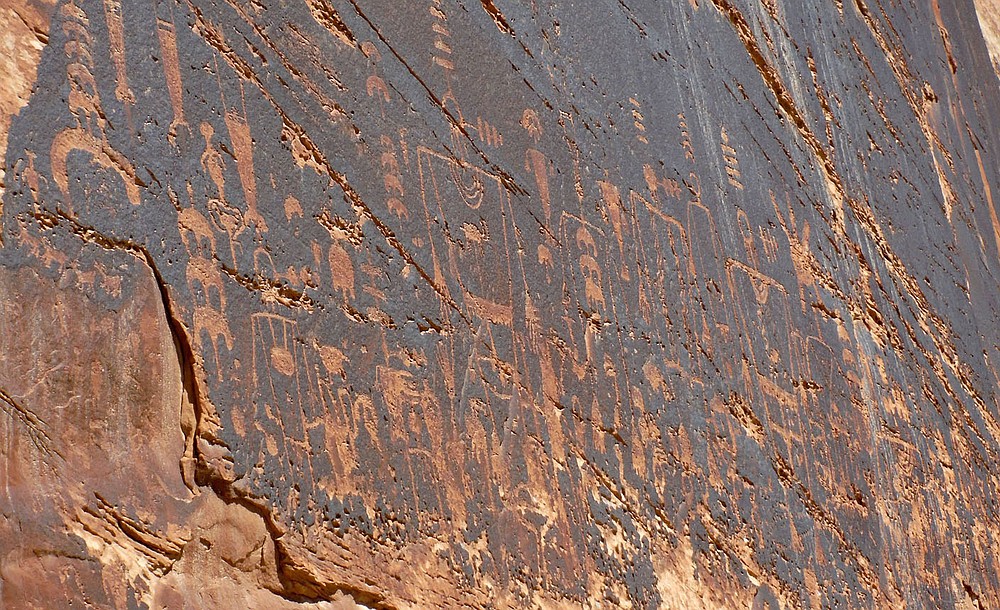 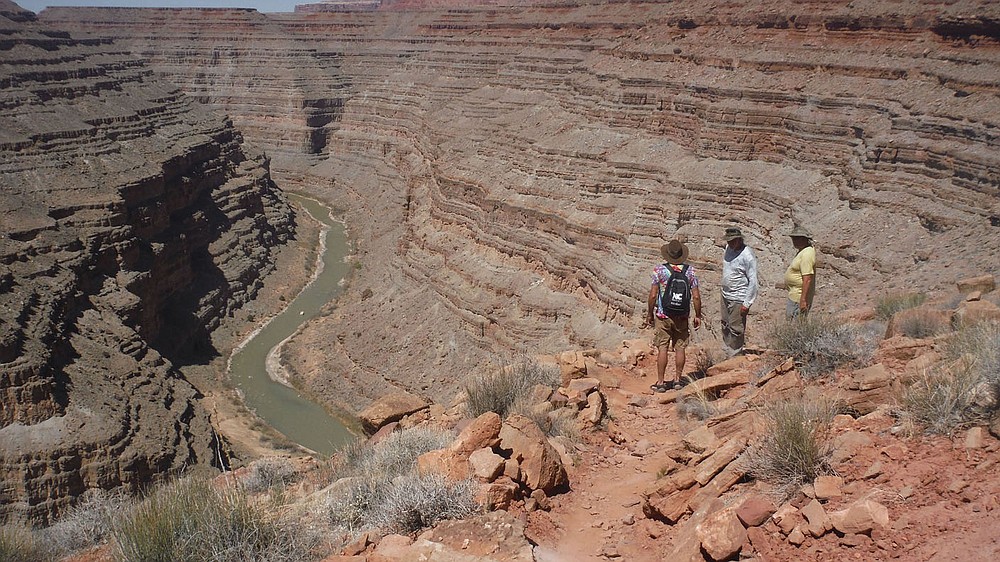 Bobby Cox (from left), Bob Kramer and Dan Held stop for the view on the Honaker Trail on the San Juan River. (NWA Democrat-Gazette/David Gottschalk) 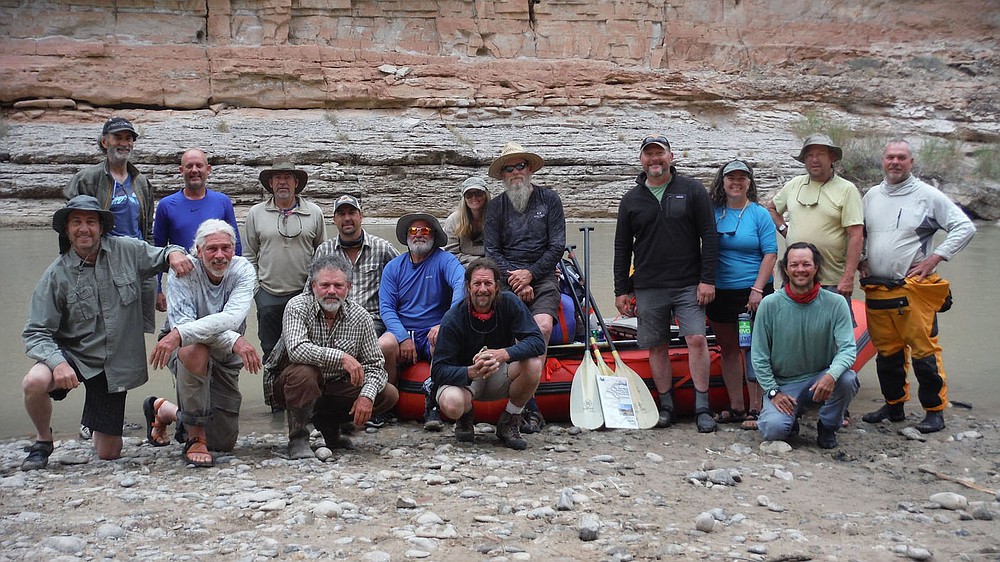 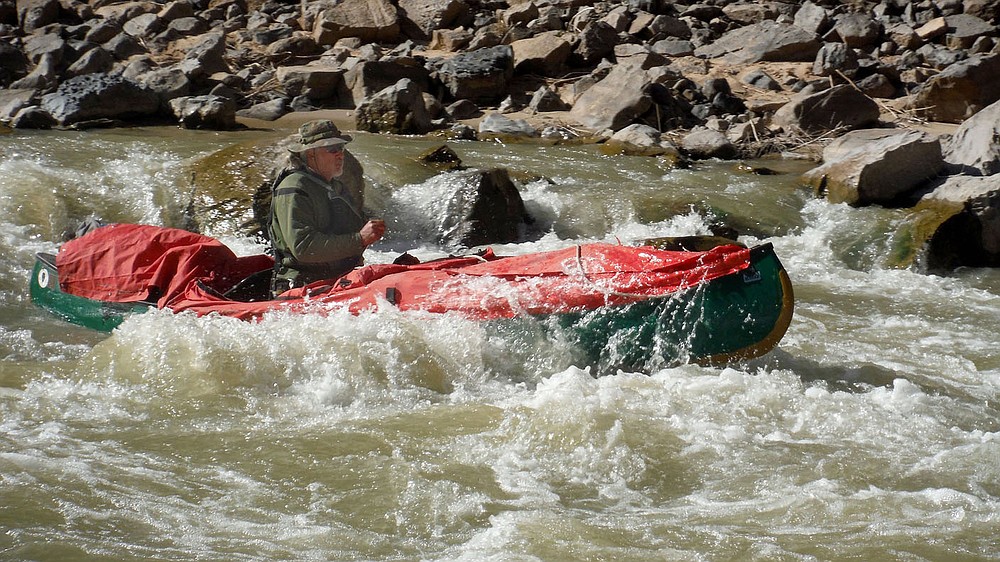 Bob Kramer paddles through a rapid in April 2021 on the San Juan River in southeast Utah. Sixteen people, including 12 canoes and a raft carrying four, paddled 83.5 miles of the San Juan River from the Sand Island Boat Ramp near Bluff, Utah to Clay Hills Crossing Utah. (NWA Democrat-Gazette/David Gottschalk) 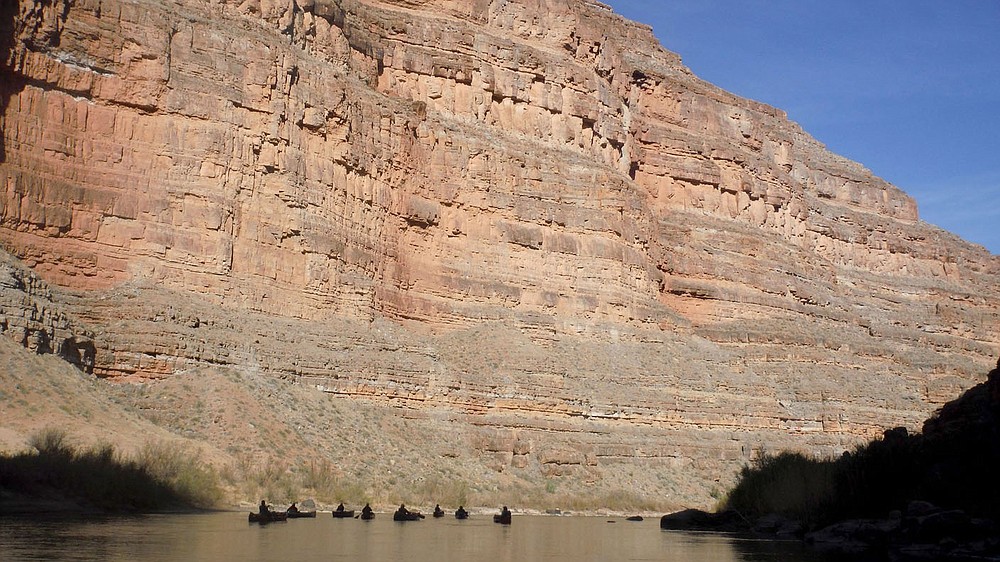 Nine of the 12 canoes are visible in April 2021 as they float the San Juan River through Slickhorn Canyon in southeast Utah. Sixteen people, including 12 canoes and a raft carrying four, paddled 83.5 miles of the San Juan River from the Sand Island Boat Ramp near Bluff, Ut., to Clay Hills Crossing UT.. Check out nwaonline.com/210608Daily/ and nwadg.com/photos for a photo gallery. (NWA Democrat-Gazette/David Gottschalk)
More News

The San Juan River is a major tributary of the Colorado River in the southwestern United States. It flows 383 miles through the deserts of northern New Mexico and southeastern Utah before joining the Colorado River at Glen Canyon.