Mouth guard good option to CPAP for some, study finds 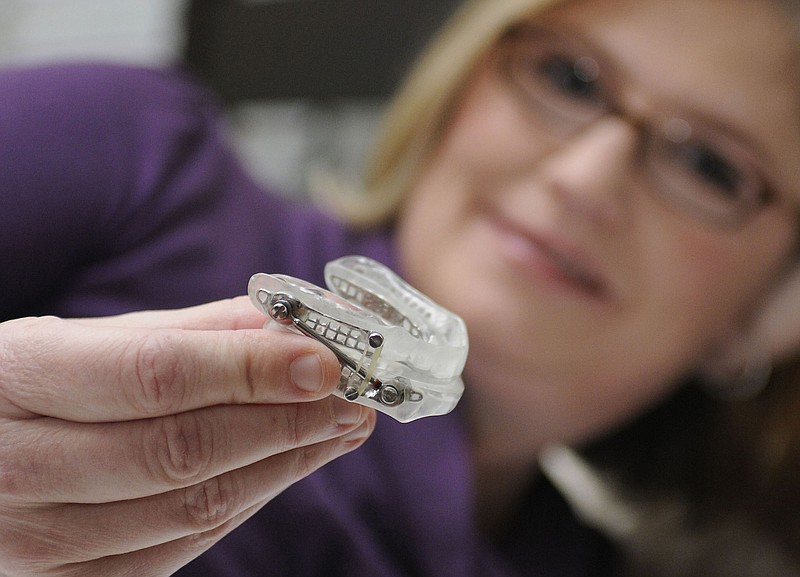 A new study suggests that people with sleep apnea who can't tolerate the noise and discomfort of a CPAP machine might benefit from a mouth guard or surgery. (The New York Times/Tami Chappell)

Some people with obstructive sleep apnea could use a special mouth guard instead of commonly prescribed breathing machines, a new study suggests.

Continuous Positive Airway Pressure (CPAP) machines are worn at night to treat the interrupted breathing of obstructive sleep apnea, which affects an estimated 22 million Americans. Such machines can be noisy, cumbersome and uncomfortable, and many people stop using them, which can have dire consequences.

Mouth guards may be a more comfortable and easy-to-use alternative for some with obstructive sleep apnea, according to a new report.

The study, published in Laryngoscope, looked at 347 people with sleep apnea who were fitted with a mouth guard by an otolaryngologist. Two-thirds of patients reported they were comfortable wearing the devices, and the devices appeared to be effective in helping to relieve their disordered breathing.

The study's lead author, Dr. Guillaume Buiret, head of otolaryngology at Valence Hospital in Valence, France, said that if he had sleep apnea, he would choose an oral appliance first.

"It's easy to tolerate, effective and it costs a lot less than CPAP," he said. "Thirty to 40% of our patients can't use CPAP, and these patients almost always find the dental appliance helpful. I would recommend it as a first-line treatment."

Loud snoring is the most obvious consequence of sleep apnea, but the condition, if left untreated, can lead to a range of complications, including high blood pressure, heart disease, liver dysfunction and Type 2 diabetes.

The problem develops when soft tissue at the back of the throat collapses during sleep, blocking the airway. Breathing stops for brief periods, followed by gasping, difficulty staying asleep and all the problems of daytime sleepiness, from poor job performance to fatal accidents.

The severity of the condition varies widely, from a very mild problem that may need no treatment to severe or even life-threatening disease.

Dr. Sara Benjamin, a neurologist and sleep specialist at Johns Hopkins University, said that spending a night in a sleep laboratory monitored by a technician is the best way to diagnose apnea. A lab study offers the most thorough analysis and can detect other sleep problems besides apnea, but there are home test kits that are easy to use and cost-effective. They test breathing effort and oxygen levels, but not the brain waves, muscle tone and leg movements that a lab test records.

Benjamin said, "If a person feels sleep problems are [affecting] daily activities, that's enough to go and get evaluated. If the cause is a breathing problem, you don't want to ignore it."

CPAP machines are usually the first treatment option. The device has a motor that delivers pressurized air through a tube attached to a mask that covers the nose, or the nose and the mouth. This keeps the airway open. Some machines can automatically change the pressure to compensate for changes in sleep position; others require manual adjustment. Headgear varies, but all have adjustable straps to get the right fit. Newer models can deliver heated or humidified air, depending on the patient's preferences, and there are small travel models.

But many patients find sleeping with a mouth guard less awkward or unpleasant. The technical term for these appliances is mandibular advancement devices, so named because they push the lower jaw forward, which in most people helps keep the airway open.

There are many variations of these gadgets available in drugstores, but a dentist can design a more effective, personalized appliance, and modify or adjust it when necessary. The patients in the Laryngoscope study were all re-examined after the first fitting, and most needed adjustments over a two- to four-week period.

"We recommend a custom device made by a dentist," Benjamin said. "And you should be retested to see how well it's working. There's subjective and objective improvement that should be tracked."

But there are people for whom neither CPAP nor dental appliances work, either because they cannot use them consistently or correctly or because the devices cannot solve the problem. For these patients, there are surgical procedures.

The most common is soft-tissue surgery, which involves modifying or excising tissue at the back of the mouth. A surgeon might trim the soft palate and the uvula, remove the tonsils, shrink tissues with a heated instrument, straighten a deviated septum or alter the position of the tongue muscles, all with the aim of improving airflow.

There are also bone surgeries that move the jaw forward to make the entire breathing space larger, a procedure that can involve a long recovery.

In 2014, the Food and Drug Administration approved a device called Inspire Upper Airway Stimulation. This is a small appliance implanted under the skin like a heart pacemaker. Using two electrical leads, it senses the breathing pattern and stimulates the nerve that controls the tongue to move it out of the way and allow air to pass freely. Implanting it is a day-surgery procedure that takes about two hours.

Dr. Maria Suurna, an associate professor of otolaryngology at Weill Cornell Medicine, said that surgery is only for adults 18 and older with the right anatomical structures who are not overweight and who have moderate to severe apnea.

"Surgery is tricky," Suurna said. "But there's no ideal treatment for apnea. Each has pros and cons, benefits and risks."