Sock back to form with Little Rock Open win 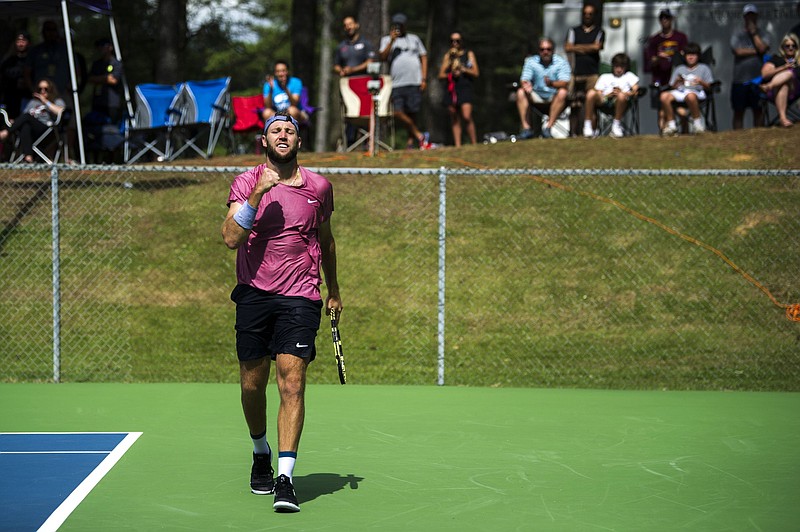 Jack Sock celebrates a hard-won point during his match against Emilio Gomez in the Singles championship match of the Little Rock Open on Sunday, June 6, 2021. See more photos at arkansasonline.com/67tennis/..(Arkansas Democrat-Gazette/Stephen Swofford)

Perhaps the tumble has stopped for a one-time world top-10 tennis star.

Jack Sock, after an injury-plagued year away from the sport, showed evidence of a potential return to form with his 7-5, 6-4 final-round victory over Emilio Gomez in the $52,000 Little Rock Open, an Association of Tennis Professionals Challenger Tour event completed on Walker Championship Stadium Court at Rebsamen Tennis Center in Little Rock on Sunday.

Sock, 29, was once ranked as high as No. 8 by the ATP, but the right-hander tore two ligaments in his right thumb as he caught a medicine ball tossed his way in 2019. That and an injured back kept him away from tennis for a full season. Before the Little Rock Open, he had not won a singles event since 2017.

"From where I've been in the last few years, this means a lot," Sock said. "It starts with the injuries. It's just brutal, especially with tennis. When you're injured for any significant period of time, you have to start over. It's just the reality of it with the points system."

A familiar struggle greeted Sock through each stage of his latest victory. After his two-set win in the round of 32, his next three rounds went the three-set limit, including a 6-7, 7-6, 7-6 round-of-16 victory over fellow American Ernesto Escobedo, and a 6-7, 7-6, 6-4 quarterfinal advance against American Thai-Son Kwiatkowski. His 6-4, 1-6, 6-3 semifinal victory over American Mitchell Krueger was rain-delayed and lasted until late Saturday night.

He said he expected a similar route through the final against Gomez, 28, a native and resident of Guayaquil, Ecuador, and son of Ecuadorian tennis great Andres Gomez, winner of the 1990 French Open over Andre Agassi.

"The guy's a great player," Sock said. "He's in the finals for a reason. He didn't get here by luck. I knew it coming in."

In the first set of the championship match, each player held serve through the first 10 games. Sock finally broke Gomez, ranked 179th, to serve 6-5 and hold to win the set 7-5.

With momentum established, Sock broke Gomez's serve early in the second set and subsequently held to lead 3-1 en route to his 6-4 clincher.

"I was able to scratch out a few points and then get the break there in the first, and then I just played solid in the second," Sock said. "From where I've been in the last few years, this means a lot."

"He brings so much experience," Gomez said. "With what he brings to the court, when he's focused, he's tough. He came back from a couple of injuries, and he's good. He'll be back in the top 100 before long."

Sock, a native of Lincoln, Neb., said he played at Burns Park Tennis Center in North Little Rock as an 11- and 12-year-old, and at Pleasant Valley Country Club in Little Rock early in his professional career.

"I know this is the South, but for me, it feels sort of like the midwest," Sock said. "People are so nice. The hospitality is great. The climate's sort of the same as I grew up in, so it feels similar to home. I like being here."