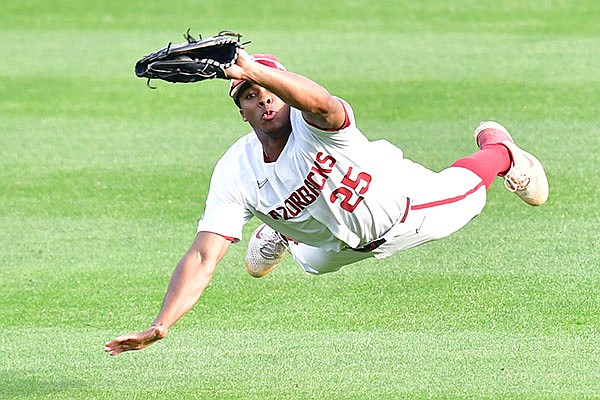 Arkansas center fielder Christian Franklin dives to make a catch during an NCAA regional game against Nebraska on Monday, June 7, 2021, in Fayetteville.

FAYETTEVILLE — Arkansas scored four runs with two outs in the bottom of the eighth inning and the top-ranked Razorbacks survived a scare to defeat Nebraska 6-2 on Monday at Baum-Walker Stadium.

Christian Franklin scored on a wild pitch by Nebraska pitcher Jake Bunz to put Arkansas ahead 3-2 in the eighth, and pinch hitter Charlie Welch followed with a three-run home run. The Razorbacks loaded the bases with three consecutive two-out walks by Franklin, Robert Moore and Casey Opitz.

6 things to know about NC State

Arkansas reliever Kevin Kopps pitched seven scoreless innings to earn his 12th win. Kopps entered the game with the Razorbacks trailing 1-0 in the third inning. Nebraska scored added another run in the third to go ahead 2-0.

Kopps retired 12 consecutive Nebraska hitters before he hit Cam Chick with a 2-2 pitch with two outs in the ninth. Brice Matthews flied out to end Kopps’ 90-pitch outing that followed 95 pitches the first two days of the regionals.

Opitz homered off Nebraska starter Cade Povich to pull Arkansas within 2-1 in the fifth. Moore hit a two-out homer in the sixth to tie the game.

Nebraska (34-14) went ahead 1-0 on Luke Roskam’s leadoff homer in the second inning. The Huskers scored twice on Arkansas starter Jaxon Wiggins, who was replaced by Kopps after he walked the first two Nebraska hitters in the third.

Kevin Kopps was masterful in relief, giving up just 3 hits over 7 innings and striking out 8, and Arkansas' offense came to his side late to push the Razorbacks into the Super Regionals.

Arkansas scored four runs in the bottom of the eighth inning on a wild pitch that scored Christian Franklin and a three-run pinch-hit home run by Charlie Welch.

Casey Opitz and Robert Moore also homered in the win. Moore's home run in the sixth inning tied the game 2-2.

The Razorbacks will now host NC State needing two wins to advance to the College World Series in Omaha, Neb.

We'll have much more from tonight's game later on WholeHogSports.com.

Cayden Wallace struck out swinging to open the bottom half, Brady Slavens grounded out into the Cornhuskers' shift behind second base then Christian Franklin drew a 10-pitch walk, bringing Robert Moore to the plate.

Moore walked, putting two men on. Nebraska pitcher Koty Frank then began his matchup with Casey Opitz with consecutive balls, forcing Will Bolt to go to his bullpen. Jake Bunz is now in to pitch for the Cornhuskers.

The second pitch Welch sees is a wild pitch, scoring Franklin. The Razorbacks have a 3-2 lead.

The very next pitch Welch saw, he hammered it into the Hog Pen to push the Arkansas lead to 6-2. It is Welch's sixth home run of the season, and the biggest one yet.

Another scoreless inning for Kevin Kopps, who is now through 6 innings having allowed just 3 hits while striking out 6. He has retired the last 10 batters faced and his ERA is now 0.69.

Arkansas is sending Cayden Wallace, Brady Slavens and Christian Franklin to the plate.

Cullen Smith popped up to third base to begin the home half of the inning, then Jalen Battles hit a ball deep in the hole at shortstop and Spencer Schwellenbach did not get enough on his throw to get Battles at first.

But Zack Gregory flew out to left-center field and Matt Goodheart drove a pitch to the track in right-center field for the third out.

Kevin Kopps is headed back to the mound having thrown 46 of 62 pitches for strikes.

Kevin Kopps struck out Brice Matthews swinging to begin the inning, Mojo Hagge grounded out to first and DH Logan Foster stuck out swinging as well. He has retired seven consecutive batters.

Arkansas will send Cullen Smith, Jalen Battles and Zack Gregory to the plate in the home half.

After Brady Slavens and Christian Franklin went down on strikes to open the bottom half of the inning, Robert Moore tied the game with a solo home run to right.

It is Arkansas' 101st home run of the season and Moore's 14th, which leads the team. Baum-Walker Stadium is alive.

Kevin Kopps worked a quick top of the sixth inning, needing only eight pitches to retire the side. Luke Roskam, Griffin Everitt and Cam Chick each grounded out.

Arkansas will send Brady Slavens, Christian Franklin and Robert Moore to the plate in the home half of the inning.

Casey Opitz homered to lead off the bottom of the fifth inning. He crushed a pitch from Cade Povich into the Razorbacks' bullpen in left field.

That homer followed Nebraska stranding runners on the corners against Kevin Kopps. There is some life back in the ballpark.

Jalen Battles followed the Opitz homer with a double down the line in left, then Zack Gregory drew a four-pitch walk to bring Povich's day to an end.

Wynne got Matt Goodheart to pop up to third base and Cayden Wallace to fly out to right, leaving two men on base.

Cornhuskers starter Cade Povich cruised through the heart of the Razorbacks' order, sitting down Brady Slavens and Christian Franklin on strikes. Robert Moore then hit a lazy fly ball to right for the third out.

Slavens has struck out in five of his last six trips to the plate going back to Sunday night. Franklin is in a funk as well.

Arkansas has only one hit – a one-out Zack Gregory double in the third – tonight.

Kevin Kopps worked around a one-out single in the top of the fourth inning. Jalen Battles made a nice play moving to his right to retire Brice Matthews for the third out.

Kopps has thrown 24 pitches, 16 for strikes.

Arkansas will send Brady Slavens, Christian Franklin and Robert Moore to the plate in the bottom half of the inning.

After a Jalen Battles groundout to third, Zack Gregory energizes the crowd with a double down the line in left, turning the lineup back over to Matt Goodheart.

Goodheart flew out to the track in left field, but Gregory was unable to tag and advance. Cayden Wallace then grounded out to the shortstop to end the threat.

Nebraska will send 4-5-6 in its order to the plate in the top of the fourth.

Jaxon Wiggins' outing is over after 2-plus innings. He allowed one earned run on Luke Roskam's solo home run then began the third inning with a pair of walks.

Kevin Kopps is on in relief. This is the earliest he has entered a game this season. He inherits runners on first and second.

Cornhuskers leadoff hitter Joe Acker laid down a bunt against Kopps, moving two into scoring position. Jaxon Hallmark then bounced out to Jalen Battles to score a run and make it a 2-0 game.

Kopps retired Spencer Schwellenbach with a fly ball to center field, which Christian Franklin laid out for. Big-time play to save a run.

Robert Moore and Casey Opitz put good swings on a couple of pitches and drove them deep, but both stayed in the yard. Mojo Hagge, who has been on the receiving end of boos from Razorbacks fans the last couple of days, made a diving catch near the line in left on Opitz's ball.

The sections of Cornhuskers fans behind the first-base dugout then began chanting his name.

That was his 10th home run of the season, according to StatBroadcast.

Wiggins rebounded and worked a pop-up, lineout and strikeout send it to the home half of the inning.

Arkansas will send Robert Moore, Casey Opitz and Cullen Smith to the plate in the second.

Razorbacks get a two-out walk from Brady Slavens, but go quietly in the home first.

Matt Goodheart struck out looking, Cayden Wallace grounded out to second on a nice play by Cam Chick, and Christian Franklin went down looking to end the inning.

Franklin has been hitless in eight of his last 11 games coming into tonight.

Strong, efficient top of the first for Jaxon Wiggins, who retired the side in 11 pitches. He began the game with a strikeout of Nebraska right fielder Joe Acker by throwing him 96, 95, 96, 97 and 83.

Jaxon Hallmark flew out to the gap in right-center field, where Cayden Wallace made a nice running grab, then Wiggins got Spencer Schwellenbach to ground to third.

Matt Goodheart, Wallace and Brady Slavens due up for the Razorbacks.

Right hander Jaxon Wiggins is starting tonight for Arkansas. He is 3-1 on the season with a 4.71 ERA and is making his fourth start of the season.

Cayden Wallace is back in right field, and Zach Gregory is starting left field and batting ninth.