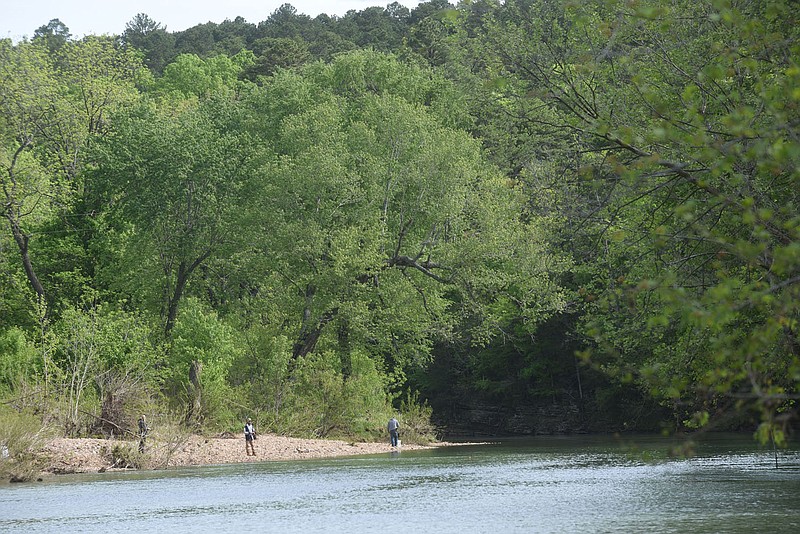 SPRINGTIME FISHING Anglers fish Wednesday May 12 2021 at the War Eagle River in east Benton County downstream from War Eagle Mill. During spring some species of fish migrate upstream and stack up in front of the mill dam, which attracts fishermen. Go to nwaonline.com/210513 Daily/ to see more photos. (NWA Democrat-Gazette/Flip Putthoff)

David Shindler and Drew Christian, both of Little Rock, tapped the Kings River to start their recent fishing adventure in the Ozarks on May 29-30. Despite decent fishing conditions, the Kings couldn't find the strike zone, so Shindler and Christian turned to the War Eagle for middle relief. Despite its stellar reputation, the War Eagle didn't bring its best stuff, either.

The late innings went to the White River, which closed the outing with an admirable performance that sent the fans home happy.

Shindler and Christian have been fishing together for more than 20 years, but their activity level is accelerating with age as they discover exciting new places in Arkansas to visit. They prefer small rivers, but in recent years they have discovered that many of the feeder creeks to the White and Little Red rivers also have excellent fishing. They have also discovered small watershed lakes and water supply reservoirs that exist to most Arkansans as only small blue blots on a map. Their challenge, Shindler said, is navigating small waters for which big boats are unsuitable, but which are also too big for paddlecraft.

"We're past our prime in canoes, so we started fishing in a drift boat," Shindler said. "It's perfect for what we do."

It's not the typical drift boat that fishing guides use on the White River with a wide beam and high, upswept bow and stern. It's an inflatable model called the Stealth Craft Hooligan. This is very important, Shindler said, because it is the ideal solution for the kind of fishing that he and Christian do. It's 141/2 feet long. The oarman sits in the middle, and stanchions at the bow and stern enable fly fishing while standing.

On Friday May 28, Shindler and Christian launched their Hooligan for a 5-mile float on the Kings River in Carroll County. It rained all day, but Shindler said it was the only green water in Northwest Arkansas. When they're not flooded, streams in the Ozarks have an emerald tint from the minerals in the water. Anglers love to see it, but the fish didn't bite.

"It was up and running about two-and-a-half miles per hour," Shindler said. "We got on the water at 9 a.m. and came off at 4. Only twice during the day did I take the hood off my head. It rained so much that we couldn't even eat our sandwiches. Peanut butter crackers is all we ate. I think we caught five smallmouth bass, none of them with any size."

Even so, Shindler said the trip was successful.

"We didn't see another person on it, and we didn't see another man-made structure," Shindler said. "Two bald eagles flew right over our heads and landed on two big trees on both sides of river. They just looked at us as we went past them. It was eerie."

On May 29, Shindler and Christian visited the War Eagle River.

"It's a goat trail that goes straight down a mountain to the Game and Fish access," Shindler said. "The river was up, and it was muddy. It was every bit as fast as the Kings."

It didn't rain and the pair caught only three fish in a 7.5-mile float, but Shindler said he treasures the experience.

"It's a mini Buffalo River with all its cliffs and overhangs," Shindler said. "All of the bird noises and forest noises sounded like an old Tarzan movie. It was really cool because it let you know you were in wild Arkansas. We didn't see another person."

By May 30, Shindler and Christian were ready to add some fish to the experience. They gave the ball to the White River.

"Sunday was a flex day," Shindler said. "The Kings River was going to be crowded, and the War Eagle wasn't going to drop enough to change it. Water conditions were good on the White, so we went over there, and both of us caught nice brown trout. It was the capstone to the weekend."

Throwing sinking Rapala stickbaits, Shindler and Christian caught brown trout drifting in the Wildcat Shoals area, including two that were 18 and 19 inches long.

"It was 85 degrees and sunny," Shindler said. "We were about 30 feet off the bank throwing to the bank. A cloud bank came over, and both of us nailed them on large Rapalas. They came out from under those rocks and just hammered them."

Fishing often with one partner for so long has created an unbreakable bond that evolves with time. Catching fish is actually secondary. Shindler and Christian value the experience, Shindler said, and catching fish is a bonus.

"We fish seamlessly together. It's just something we do," he said. "You support your fishing buddy. We help each other fish. If I can't catch one, I try to help him catch one. In two days of fishing, we didn't catch 10 fish. Eight fish together. That's not great catching, but it was great fishing. The perspective of time gives you that too, to appreciate being on the water doing something relaxing and beneficial."

With the help of his Arkansas Atlas and Gazetter, Shindler is already looking for new places to plan the next adventure.