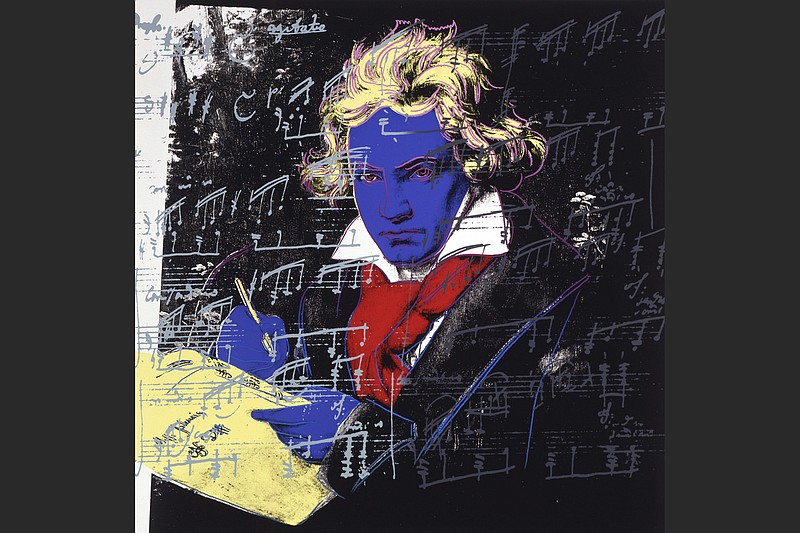 Beethoven is immortalized in this work by Andy Warhol. (AP/The Andy Warhol Museum)

Although much is known about Beethoven, whole swaths of his life remain elusive. His deafness, for one thing. He started experiencing hearing loss before he was 30. But how extensive was the initial problem? How quickly did it worsen? It's not clear.

His most revealing words on the subject come in a letter he wrote (but never sent) to his brothers in 1802, while seeking isolation and resting his ears in Heiligenstadt, on the outskirts of Vienna. In the Heiligenstadt Testament, as it became known, his fear comes through poignantly. But what did it feel like to go deaf? What sensations did he experience? What did music sound like to him?

British poet Ruth Padel tries to fathom this mystery, and other long-mythologized strands of the composer's life story, in "Beethoven Variations: Poems on a Life," recently published in the United States. Padel's imagery and imagination took me deeper into Beethoven than many biographies I've read.

In one of the first poems, "On Not Needing Other People," Padel describes the 13-year-old Beethoven visiting the Breunings, a rich, cultured family that befriended him. Most books on the composer present this episode as an opportunity for the young Beethoven to enjoy some familial companionship — one of the sons became a lifelong friend — and develop career skills by teaching piano to some of the children.

But Padel dwells on how different, how apart, Beethoven must have felt, even while savoring the family's attention. The mother told her children to let their young visitor alone when he slipped into, as Padel puts it, "the solitude she calls raptus" and displayed his "surly way of shouldering people off," his "fits of reverie, lost/in a re-tuning of the spheres." As Padel perceives it, Beethoven early on drifted into states that prefigured how deafness would increasingly isolate him:

In "Moonlight Sonata," Padel, in an imaginative leap, describes that famous piano work as music of loss — not just of love, but of hearing: "Bass clef/High treble only once/and in despair." For Beethoven, she continues, this is the new "shocked calm of 'Is it true?'" Is this "what it sounds like, going deaf?"

In a poem about Beethoven's five-month stay in Heiligenstadt, Padel recounts her own visit there — with views of the Danube canal and vineyards in bud — as she follows his steps into a cobbled yard: "God invents curious/torture for his favourites. He's thirty-one./Fate has swung a wrecking ball." Beethoven has walked into a place "of zero sum," she writes, where "he must cast himself as victim or as hero."

Although he "cannot hear the driving rain," he is sketching a funeral march — a symphony — taking him down a new path. In "Eroica," Padel arrestingly describes that path:

Most traditional biographers are reticent about guessing how Beethoven's deafness affected his composing. Padel, though, suggests — daringly but compellingly — that Beethoven's isolating deafness contributed to his greatness. "What we forget," she writes, "makes us who we are" — perhaps for Beethoven, that eventually included the actual sound of music. Describing what she felt as she examined the manuscript of the late Op. 131 String Quartet, Padel asks, "Does being deaf break the chains?"

"Could he," she writes, "have written this otherwise?"

Padel knows her history. But a poet is free to inhabit her subject and elaborate on the record. And she describes Beethoven's music vibrantly, as in her acute phrases on the sublime slow movement of the Op. 132 String Quartet: "Cloud iridescence"; "Wave-shadow like mourning ribbon"; "Quiet as a wreath of sleep/for anyone in sorrow."

A writer and teacher, Padel has also explored ancient Greek culture, the contemporary problems of refugees and homelessness, and science. (Charles Darwin was her great-great-grandfather, and her book "Darwin: A Life in Poems" was published in 2009.) The Beethoven poems are informed by her lifelong immersion in music, starting in her youth, when her father, a psychoanalyst and cellist, conscripted her into a family ensemble; she played the viola.

The book originated through Padel's work over the past decade with the Endellion String Quartet, to whom it is dedicated. Padel first worked with the Endellion on performances of pieces by Haydn and Schubert, in which she wrote poems and read them between the movements. Asked to collaborate on a Beethoven program that included the Op. 131 Quartet, she wrote seven poems to be interspersed between that visionary work's seven movements. As the 250th anniversary of Beethoven's birth, in 2020, approached, she went further and wrote what is, in effect, a poetic biography.

Naturally, some of the poems will speak more immediately to those with knowledge of the events and characters of Beethoven's life. So Padel helpfully includes "Life-Notes: A Coda," about 30 pages of short biographical bits linked to the four sections of poems (49 in all). Even these entries have poetic elegance. Explaining that Beethoven's alcoholic, abusive father put his young son to work playing viola, she explains why the instrument appealed to her, and may have suited Beethoven: "It does not have the brilliance of the violin or power of the cello, but when playing it you hear everything going on around you, all the relationships and harmonies, from inside. It is a writer's instrument, inward and between."

Visiting the house where Beethoven was born, in Bonn, Germany, Padel imagines "your mother/carrying the shopping," "your father staggering home drunk/up these stairs" to "wake you in the middle of the night." In "Meeting Mozart," she describes the 16-year-old Beethoven after a three-week winter journey to Vienna, "burning" to be taught by the master.

Many biographers struggle to deal with this meeting between two of the titans of music history. Padel puts herself in the mind of the young Beethoven, to whom Mozart "looks like a fat little bird./Bug eyes, fidgety,/tapping his toes." Beethoven's performance of a Mozart sonata fails to impress its composer, who suddenly urges Beethoven to improvise.

"And at last he's caught," Padel writes. It's a thrilling moment in her telling.

Then the news comes that his adored mother is gravely ill and Beethoven is "snatched away":

There are poems about Beethoven's hapless infatuations with unattainable women from the upper ranks of Viennese society; about his sexual activities ("Brothels? Probably. Everyone did."); and, especially, about his long, contorted legal battle to gain custody of his young nephew Karl from his widowed sister-in-law. His obsession with being a substitute father causes a long dry spell in his composing:

The collection's final poem, "Musica Humana," begins with a description of a postmortem examination of Beethoven's inner ears, the auditory canal "covered in glutinous scales/shining throughout the autopsy." Other biographies report on this, but not with such gruesomely poetic imagery. And "how he died," Padel marvels, "lifting his fist/as if it held a bird he would release into the storm."

I thought back to an early poem about Beethoven's bullying father: