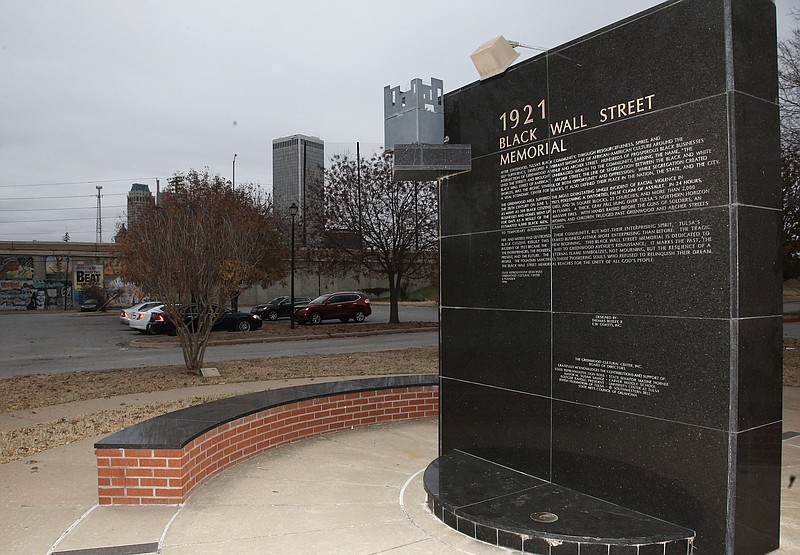 In this Thursday, Dec. 15, 2016 photo, a memorial to Tulsa's Black Wall Street sits outside the Greenwood Cultural Center on the outskirts of downtown Tulsa, Okla. A once-prosperous section of Tulsa that became the site of one of the worst race riots in American history is attempting to remake itself again after decades of neglect. Black leaders want to bring 100 new companies to the former Black Wall Street in north Tulsa by 2021, the 100th anniversary of its fall. (AP Photo/Sue Ogrocki)

Why do we learn?

We learn so we can do, with the general idea that our "doing," whatever it might be, can be made better tomorrow by what's learned today.

Education is the absorption of the knowledge someone else went to the trouble to discover. Imagine, for example, how difficult it would be to become an electrical engineer if each person had to start from scratch and rediscover for themselves what electricity is, how it's generated and how it's conducted from one place to the next. Whether it was Michael Faraday, Benjamin Franklin, Thomas Edison, Joseph Swan, Nikola Tesla or George Westinghouse, they all built on the lessons learned by those who came before them. Ignoring the experiences and knowledge of their predecessors would have been foolish.

Without passing on knowledge, we'd all still be trying to figure out how to make fire, sharpen sticks and hunt our food.

In the United States' historic struggle with racism, parts of the past have been too easily and too often ignored because they do not harmonize with the cherished principles and heroic imagery of a nation born in liberty. Credit Americans for deeply wanting to celebrate their nation, as we'll do when Independence Day rolls around in less than a month. In 2021, though, must we pretend the only way to honor all that is good about the United States is to ignore the times when its people have not lived up to the nation's better principles?

There is ugliness mixed in with this country's founding and its 245-year journey since. And by mixed in, we can accurately say that sometimes means swept under the carpet.

Last week, Americans got an opportunity for a greater understanding of how racial animosity can lead to inhumanity, the proportions of which seem inconceivable circa 2021. That opportunity came from Tulsa, Okla., Northwest Arkansas' not-so-distant neighbor to the west.

President Joe Biden came to the Greenwood District of Tulsa, an area known 100 years ago as "Black Wall Street" because its residents built an economically thriving community. Greenwood's 10,000 or so residents made their part of town one of the most affluent communities of color in the country. White residents of Tulsa in many instances called it "Little Africa," a designation that speaks volumes about the great divisions perpetuated by legally and culturally enforced segregation.

Those divisions found their expression in violence in 1921, sparked by a relatively minor incident between a Black teenage boy and a white teenage girl that a local newspaper's reporting cast as an assault by a "negro," if not an attempted rape. The young man was put in jail, amid rumors a white mob planned to lynch him. Some Black men armed themselves, determined to prevent a lynching.

Tensions boiled over, giving rise to attacks by some white Tulsans on the residents of Greenwood. Murders, beatings and destruction followed.

"Hell was unleashed." That's the way President Biden put it last week as events in Tulsa attempted to set the historic record straight. For decades, a town birthed of the oil boom had attempted to erase the memories of an American atrocity.

"My fellow Americans, this was not a riot," Biden told those gathered in remembrance. "This was a massacre."

Here was an American president giving voice to the tragedy so many attempted to hide from the historic record. Biden noted such violence against Black Americans happened in other communities, but over two days in 1921 Tulsa, the level of violence is hard to grasp. Dozens were officially recorded as slain, although historians suspect the numbers are inaccurately small. More than 30 square blocks of Greenwood homes and businesses were destroyed by arson, including firebombs reported to have been dropped from private airplanes.

What are we to make of all this in 2021? Critics might suggest there's little value to wallowing in the past, to paying attention to what are truly shameful episodes. Doing so, some will quietly suggest, is to malign the greatness of the United States.

"We do ourselves no favors by pretending none of this ever happened or that it doesn't impact us today, because it does still impact us today," he said. "We can't just choose to learn what we want to know and not what we should know. We should know the good, the bad, everything. That's what great nations do. They come to terms with their dark sides. And we're a great nation. ...

"I come here to help fill the silence, because in silence, wounds deepen," the president said. "And only, as painful as it is, only in remembrance do wounds heal. We just have to choose to remember."

Like those electrical engineers who must embrace past discoveries before they can illuminate new ones, Americans can learn, if they are willing, by acknowledging past atrocities and seeking to grasp lessons about humanity and inhumanity; about the capacity for harm that exists in the promotion, acceptance or apathy toward racism; and about the surpassing value of healing.

Cancer will not go away on its own no matter how aggressively one ignores it. It must be acknowledged before any recovery can be possible.

Tulsa's reconciliation has been a long time coming, but even after 100 years, it's not too late.

"Hate's never defeated. It only hides," President Biden said. "And given a little bit of oxygen, just a little oxygen by its leaders, it comes out of there, from under the rock, like it was happening again, as if it never went away.

"We must not give hate a safe harbor."

Americans must be willing to face the nation’s history of racism before it can recover from its corrosive effects.